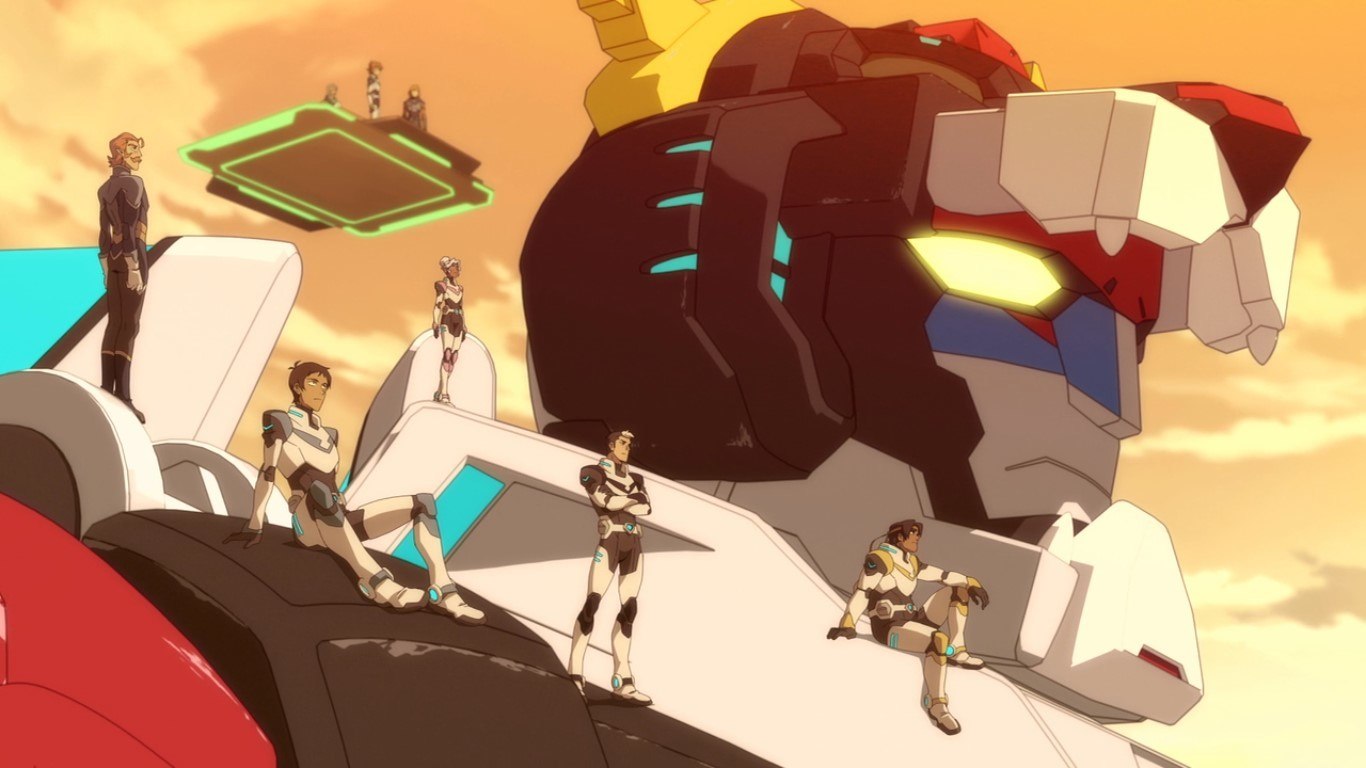 *Light Spoilers Up Ahead*

Season 5 of Netflix’s “Voltron: The Legendary Defender” anime reboot dropped on March 2 and drives the series deep into the realm of galactic political thriller and sci-fi space opera.  Knowledge (Alchemy), resources (Quintessence), and bloodlines serve as the balancers of war and peace in this expanded take of the Voltron force.

The original Voltron series was actually an American licensed re-edit and overdubbing of two different Japanese series – BeastKingGoLion (1981) for the first season and Armored Fleet Dairugger XV (1982) for the second. A third installment was planned using yet another series’ content (1983’s Lightspeed Elecroid Albegas), but the GoLion version became so iconic and connected to the Voltron brand that production on the new interpretation was halted. Thus far, the Netflix adaptation pulls primarily from the mythology and imagery of BeastKingGoLion, and avoids the mishaps of previous failed reboots  – “Voltron: The Third Dimension” & “Voltron Force”.

The series starts off limply with the first episode (“The Prisoner”), focusing on Pidge’s (Katie, actually) quest to save her father. By episode’s end, all of the pieces are in place for the season’s primary conflict.  Prince Lotor is a prisoner of the Paladins while the galaxy’s rebel factions stand with Voltron against the Galra’s imperial expansion. In order to prove his desire to bring peace to the universe by usurping his father, Emperor Zarkon, Lotor feeds the Paladins intel on Galra bases and operations. Meanwhile, Haggar plots amongst the Galra ranks to place her own puppet at the head of the empire.

Everything that happens after that first episode, but especially the final three, define the true identity of this new take on Voltron. Political Intrigue & Instability, Ancestry & Identity, and Alchemy weave together in a way that cement this series as one of the best current Sci-Fi shows – live action or animated.

Season 5 is ultimately the story of Lotor – his journey, his ancestry, and potentially the setup for his penultimate deception. Over the course of the episodes, Lotor and Allura become increasingly close [a parallel to the relationship their parents had in creating Volton]. Half Altean and half Galran by birth, Lotor seeks to bring balance through embracing both of his heritages.  From the Galran side, he knows war, tradition, and ceremony like a Klingon priest. At the same time, his Altean heritage, like Allura’s, is what grants him access to some alchemical powers and the genetic memory to discover the most important element in the universe – Quintessence.

In Alchemy, Quintessence is defined as the pure essence of the five distillations, an ethereal element that is key to all life’s energies; it is also referred to as ‘the elixir of life’ and the ‘philosopher’s heaven’ (Battistini 292).  The very same energy created Voltron, corrupted Zarkon, and demented his wife,  Honerva, the brilliant alchemist becomes the witch known as Haggar. For Lotor, he knows that by spreading the Quintessence through Galra, the availability of resources will naturally bring about peace and reconciliation.

As the storyline has expanded to explore more of the connected universe,  the Paladins are saved from carrying the entire the weight of being the main protagonists. Aside from Keith, the soft backstories of the individual Paladins push them toward merely supporting the major arc of Lotor, Allura, their parents, and the mythos of Voltron itself. As that narrative overshadows the Paladins themselves, the storyline is allowed much more maturity. By episode 6, the action reaches peak metaphysical activity veering close to the density of Neon Genesis Evangelion.

The biggest issue with previous seasons often came from the imbalance in tone where some of the comedic elements were just kind of childish slapstick. Now, however,  the humor is much more tongue in check, and at the right times, satirical. The voice cast, directed by the legendary Andrea Romano (Batman: The Animated Series), show a great chemistry, timing, and charm that make the series very listenable, and not just anime-CG eye candy.

More often than not, the series is beautiful to watch. The traditional anime style for the character work and backgrounds are a welcome release from the barrage of CGI productions. Although the action sequences are rendered in, or merely augmented, with CGI, the shifts from CGI to traditional and back are smooth.  In fact, the best fight sequences rely very little on CGI – the Lotor vs. Zakron in “Blood Duel” battle is a tense and heartbreaking fight in testimony to the power of anime. By episode 4, “Kral Zera,” we are treated to the chaotic violent culmination of all the political and familial machinations.

43 chapters deep into the 78-episode commitment of “Voltron: The Legendary Defender,” the already acclaimed series is not only hitting its stride at the peak of its second act but accelerating toward something that could top the original in terms of social relevance.

Future predictions (not really, but really . . .): Lotor will seduce Allura and then take Voltron for himself. Pidge and Hunk are going to get married.  Allura will become one with the White Lion to bring balance to the (Voltron) force… Shiro still seems like he’s got PTSD and might snap at any moment. Just sayin’…

Hopes: The most interesting Palladian, Keith, is vastly underused as he is now part of the guerrilla ninja rebel faction known as the Blade of the Marmora. Hopefully, the next season gives them more of a presence.

The Lessons of Voltron Therein: Know thyself.  The enemy of your enemy is your ally…for now.