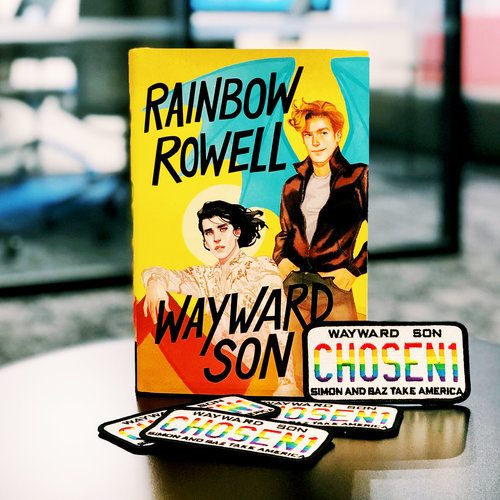 Rainbow Rowell has done it again. Not only has she effortlessly pulled us back into the world of magickal beings and wand wielding in Carry On, but she’s done it without the structural support of the Hogwarts-esk, mage training campus that expectedly drew her some criticism. Don’t get me wrong, I thought her use of a magical boarding school was quite unique and appealing despite the Rawling similarities. But hey, haters have a job to do too, right?

This sequel feels different, yet so familiar. We’re no longer in the mecca of young mage cultivation, we’re no longer burdened by this ideal of destiny and “the chosen one”; we’re allowed to indulge in the literary element of character investment that Rowell thrives in. If you can’t get invested in these people, there’s little hope for enjoying what you read, watch, write or listen to. That’s why Wayward Son is the gift that keeps on giving for anyone who fell in love with Simon Baz or Penny. It’s all them. The 3 amigos riding into the London sunset after a long day of dragon slaying and evil thwarting. The Migos driving their Maybachs into the Atlanta sunrise after a long night of spittin those flames and Waffle House beast sessions. I love that everyone gets a taste of the glory, but also reach these low points and have something to overcome. The balance that Rowell maintains so that all three shine would put your favorite gymnast to shame. Except maybe Simone Biles. 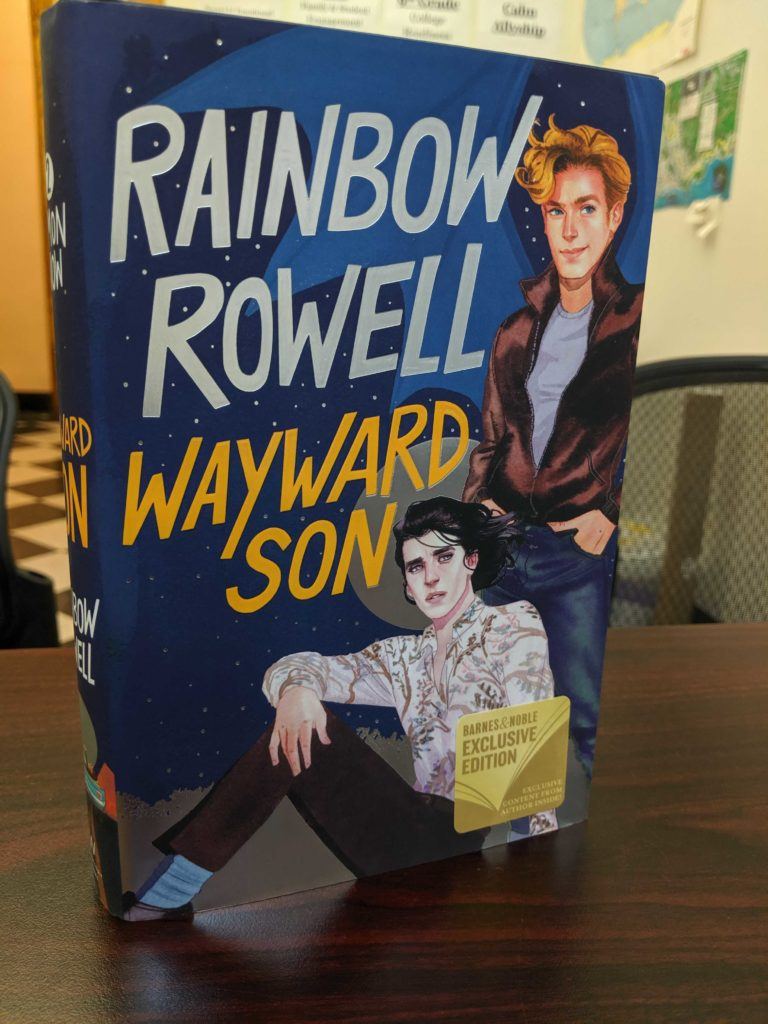 Simon, The Broken, King of the Worst Chosen Ones to Ever Be Chosen

This one’s easy. Simon is an idiot. A courageous, loyal, well intentioned idiot. But a Psyduck with red wings and a tail, nonetheless. What could be worse than that? A daring boy with no direction, no destiny to fulfill. That’s why I love the fact it was headstrong Penny who yanked Simon off the couch and convinced his mans to go on holiday in the land of magical recklessness.

Hat’s off to Rowell for finding ways to deepen the mythology of this world and add layers to the countries that inhabit it. I love reading Simon’s chapters because he’s myself when I was younger. Curious, brash, impulsive. As soon as they touch down in America, his eyes light up at Penny’s idea to go full American muscle and rent a convertible Mustang. From there on out, I couldn’t get enough of the eyebrow raising run-ins, Chimera hybrid show-downs, cosplay reppin Renaissance Fairs and West Coast basic-ness.

Some will say that Simon finds it within himself to overcome his depression, post Humdrum and The Mage benevolence, but I really look at this part of his life as the moment he really finds himself. Simon never knew how to love. Hell, he hadn’t even figured out his stance on his own queerness, but this journey from melancholy couch potato to Nevadan desert warrior was exactly what he needed to finally get some “fuck it” in his system and love Baz the way he was comfortable with. Baz had no complaints. Now I hope he returns home to become the great mage he was always meant to be.

Baz, The Beautiful, Magnificent Mage and Head Over Heels For Simon

We see a very different version of growth in Baz. The exploration of his vampire nature and identity expands on this young man we’ve barely scratched the surface of. Vampires are labeled as such villainous creatures in this world that it’s wild Baz is so damn cool. Kudos to Rowell for writing one of the best blood suckers in recent memory. Also, he’s the only one capable of driving stick, so he does the cupid shuffle into his seat and behind the wheel looking debonair, and takes off to see Penny’s heart get crushed in Chicago.

I love that the only thing that gets him off his game is the lack of American colloquial finesse it takes to continue being a monstrous mage. Luckily he has that whole nearly indestructible vampire side to him. It’s that aspect of his life that we get to explore throughout Wayward Son, and this (eventual) trilogy will benefit greatly from it.

Penny, The Powerful, Connoisseur of Magic yet Lost in Life

For me, the biggest surprise of Wayward Son was Rainbow Rowell’s decision to elevate Penelope Bunce to one of the 3 mains. Sure, you could argue she’s been by Simon’s side since day 1, but it’s different this time around. She’s no longer playing 2nd fiddle to his star crossed love interests, roommate rivalry and being subjected to the Robin role when evil rears its ugly head. Penny’s all up in Kool-Aid and Wayward Son benefits from that greatly.

It’s interesting to see this side of her, a side of indecisiveness and uncertainty. Her boyfriend basically dumps her upon arrival, which forces her into shaky territory for the first time in her life. All she has ever known is being this headstrong young lady and supremely powerful mage, but Micah drops the bomb on her that she should’ve seen coming months, if not years ago. It’s this scene out in Chi-Town that helps me appreciate the 1st person POV that each chapter represents. Being inside Penny’s head connects you to that feeling of definitive love, then quickly severs that connection like an umbilical cord after birth, leaving our girl emotionally ravished. Tears become her constant, until she’s able to get back into her element and move forward. Puffy eyes become her constant until that fateful day at the Renaissance Faire and the subsequent action scenes in this fun follow up book.

You may have noticed I haven’t said much about the other leading lady in this series. Agatha was at the center of pretty much all of Simon’s problems in the past. While that doesn’t exactly change, the specifics of her involvement are extremely different. She is the one member of the team that decided she had enough of the attacks, enough of the near death experiences and enough of magic. She leaves it all behind for a warm, peaceful So-Cal life of avocado toast and spiritual cleansing. Except Penny, Baz and Simon find themselves racing across a foreign land filled with skunk-head beings, creepy stalkers and magickal “dead spots” all in an effort to save her…again. It’s honestly the perfect premise for this story because it’s familiar enough for readers to be wholeheartedly invested, yet intriguing enough to have you eagerly flipping the page to find out exactly where this roadtrip is heading next. 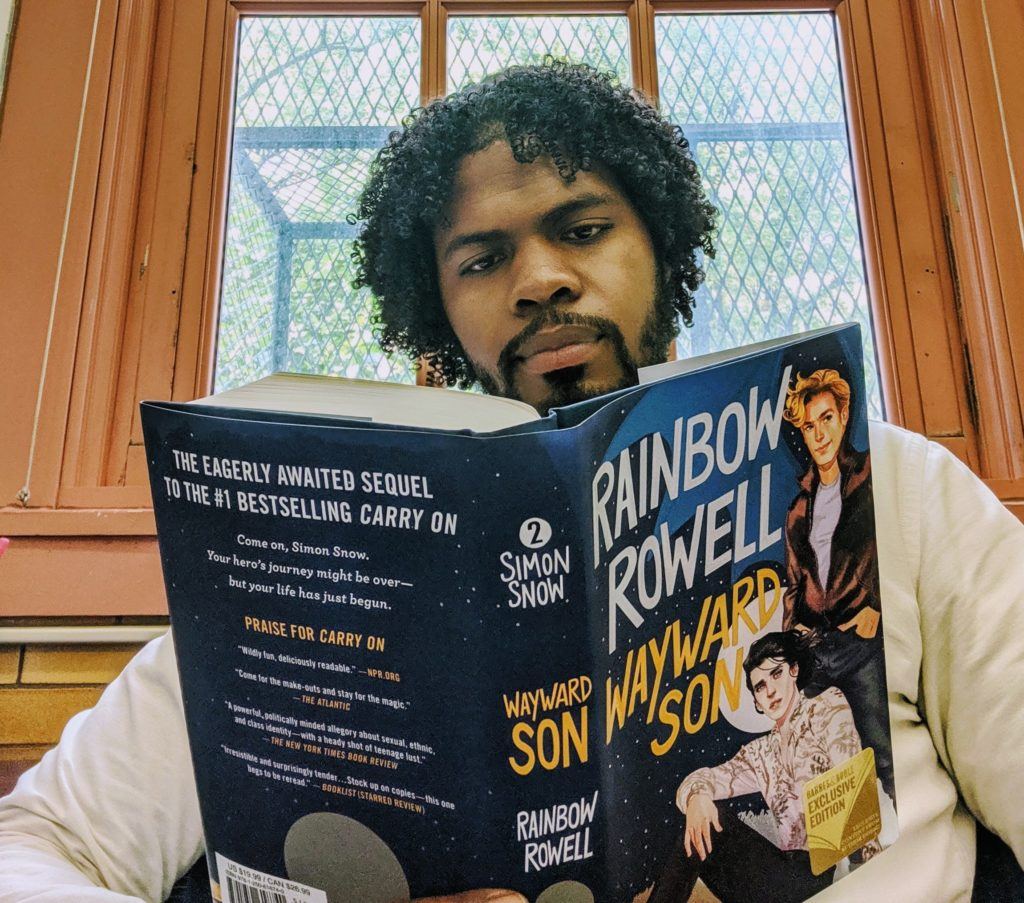 Love love love every single thing about the Renaissance Faire. It’s by far my favorite part of this book. The disgust that Baz and Penny exhibit at the horrendous take on their culture is wonderfully done. The “on sight” mindset of Baz when those sketchy characters roll up is just perfect. The unflappable nature and cell phone culture of everyone in the crowd is so spot on. The way Rowell decides to utilize Vegas was money. If there was ever a city destined to be the haven of evil in this country, Sin City is it. Oh, and did I mention the addition of a spicy new person of color? He’s someone you will seriously question whether to love him, hate him or hit him with a quick “Off with his head!” spell.

Wayward Son manages to bring readers back to Watford without shackling us to the land across the pond. There are exciting new concepts for you to wrap your head around. Surprising and intimidating new ideas cause an unhealthy amount of anxiety for our heroes. Sure, the inclusion of magic on the page takes a hit as a result of this, but Rainbow Rowell knows how to introduce new ways to get you hooked and keep the greatness of Carry On at the heart of it’s sequel.