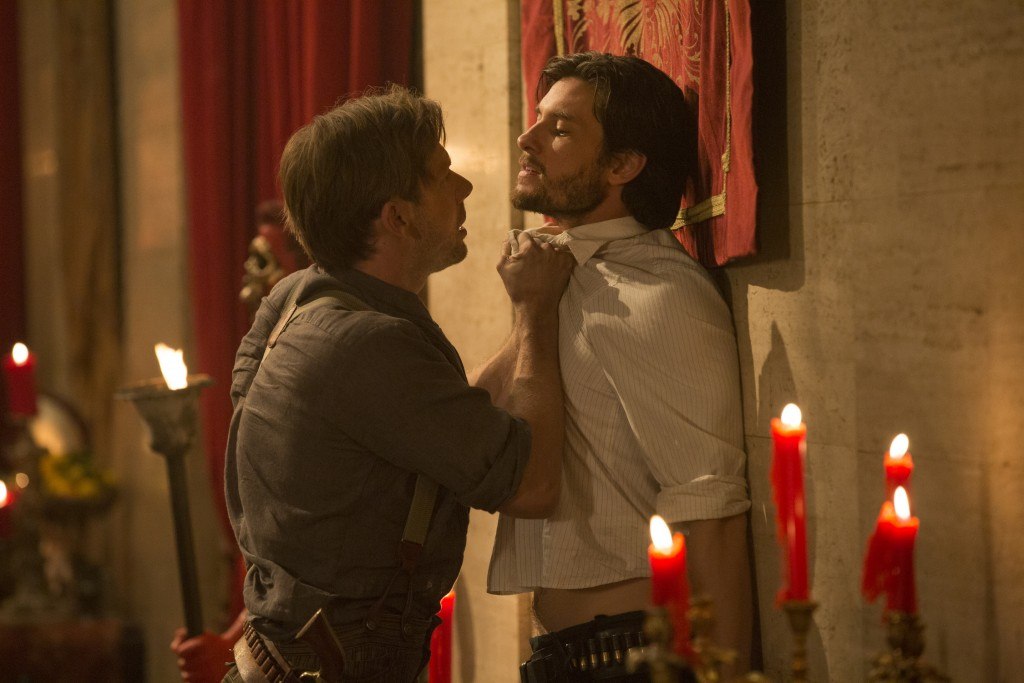 Previously on Westworld:
Delores running alternate programming, all the bad bitches looking for the maze, Arnold fucked something up before cashing all the way out, Bernard stay ruled by dollar signs and side chicks (how you cheatin’ on Gina Torres, bruh??), Logan ain’t never gon’ be nothing but an ain’t shit mofo, Maeve may have entered the void, and the internet crowns Teddy the prince of L’s.

Who’s the king of Ls in #Westworld? #SetsInTheWest

How you catch an L on catching the most L’s?? That’s next-level shit. [divider type=”thin”] We drop in on Ford regaling his decommissioned bartender buddy, Old Bill, with another fucked-up story from his childhood. Apparently, he and his brother let their greyhound loose and watched it decimate a local cat… The veil on this metaphor is so thin it’s getting a spread in King Magazine. Bill and Ford toast to the “Lady in the white shoes” for the second time. I’mma remember that, y’all. [divider type=”thin”] Dolores, posted up in a sea of graves, starts hallucinating and hearing voices. That combo ain’t never good, y’all. But no time for that because our quartet has made it to Pariah. William checks in on Dolores (because he’s sprung) and misses out on her lying (because he’s sprung). Pariah hits us with Black Union soldiers and a literal orgy of evidence that the whole town’s ‘bout that Nothing to Lose life. You understand how reckless you gotta be to fry chicken topless? Turns out Logan’s here planting the foundation for a corporate takeover. The park’s been in the red since Arnold clocked out permanently and Logan’s ready to invest. Except the first rule of Westworld is Don’t Talk About Arnold because no one outside of park employees know anything about him. That’s not going to be a problem… *awkward laughter* The Army of New Virginia rolls through and Logan, at his headass best, is like “Those are the guys we need to roll with!” Clearly, Logan was the kid drowning cats in his backyard for fun. Meanwhile, Lawrence mad af MIB is making him walk while the Crown Prince of Ls gets the horse. PoL’s ready to shuffle off this mortal coil after losing too much blood. Random Little Lord Fauntleroy pops up again and MIB sends him off to get water. Lawrence is like “Dafuq, dude? I already did that.” and becomes an involuntary blood donor courtesy of a knife to the neck. That shit was cold-blooded.

At corporate HQ, the maintenance team is patching up Maeve. Felix out here noticing fuck shit for what it is, trying to get employee of the month. His partner, Sylvester, is at 100% job satisfaction to the point of being a dick about everything. But Felix is hiding something in his locker, so Westworld’s HR is still the worst in the business. [divider type=”thin”] Back on the ranch, MIB filled Teddy with a “couple gallons of Lawrence” (geez man). MIB waxes poetic about the good old days before Hosts were made of flesh and bone because their “humanity is cost effective.” HOW IS THIS PARK STILL OPEN, DOE?? MIB reboots Teddy by mentioning Dolores and they ride off leaving Lawrence strung up like a slab of beef. In Pariah, Dolores eyes some bodies propped up in a coffin and gets another flashback to a church massacre before William pops up to conveniently interrupt before any of our questions get answered. They take a long walk and William stay giving Dolores too much information like she’s not a Host. A vaguely ethnic parade of the dead rolls through (forreal, y’all? We really doing this?) and Dolores hops in when she sees herself in the middle of it because Ford wants a little chat. Gotta say, the power trip of only interviewing Hosts when they’re butt butterball ass naked got me feelin’ some kinda way. Ford starts fishing for what may be in Dolores’ hard drive and whether she’s been talking to Arnold since he died. Dolores goes full Mariah “I don’t know her” and Ford overrides her personality and asks the real question. What was the last thing Arnold said to her?

“He told me I was going to help him…To destroy this place.” – Dolores “HOW THE HELL Y’ALL STILL GOT HER IN THE PARK” Abernathy

Ford’s thinking everything’s okay and he and Dolores just had a bonding moment. Little does he know, Dolores ass be LYYYYYYYIN’ in these sessions. As soon as Ford walks out, Dolores checks in with the voice in her head. Looks like Ford can okey-doke e’rebody except Dolores. Sorry, bruh.

[divider type=”thin”] Felix still trying to upgrade his life by putting in the CSS code for one of the park’s birds from scratch. He ain’t there yet and Sylvester won’t let him be great. Just cause you ain’t got no aspirations, sir, doesn’t mean Felix can’t elevate his life. Maeve gets brought in (again) and somehow (again) only Felix notices something’s not right with this pattern. [divider type=”thin”] Dolores, William, and Logan finally meet El Lazo, AKA Lawrence after a promotion. Logan, having gone too long without being a dick, gets to talking slick and we find out (in the best way) that Newcomers can’t be shot by a Host but they sure can CATCH THEM HANDS! Oooh, that felt good. El Lazo’s finna murk alladem when Dolores pulls a That’s So Raven. If he’s looking for something, she and her friends can help him find it. El Lazo’s like, bet and sends the trio off to help the Confederados rob some Union Soldiers. Dolores into her Player 2 costume and she gets a grey hat, calling back to earlier when Ford asked her she’d be the hero or villain. Gurl, you turning heel or nah? 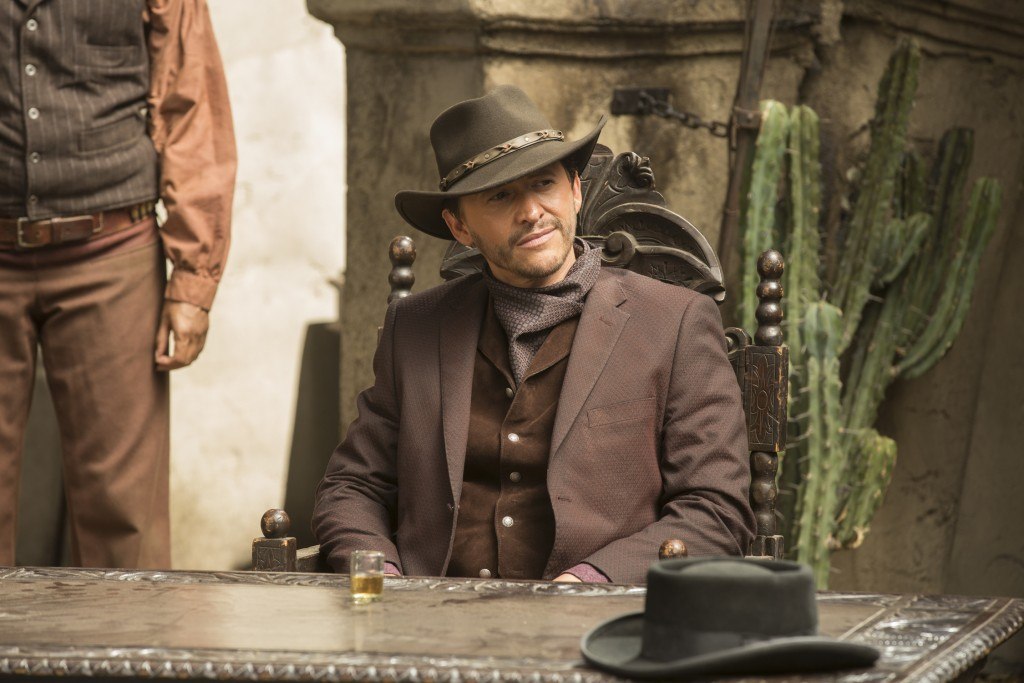 They hit the canyon, Dolores rocking a fly fit and a gun she doesn’t intend on using, and stop the Union Soldiers to steal their wagon full of explosives. Sidebar: I’m glad that none of the Black soldiers were on this trip. I’m sick of all the Black men getting shot on this show. Carry on. Logan, again having gone too long without being a fuckboi, starts beating on a Union Soldier for insulting him. Guess he forgot this far out in the park mofos hit back. Bullets start flying and both quartets become trios. Union Soldier Formerly Known as Number 2 gets ready to cap Dolores which activates William’s berserker button. He takes out the three remaining soldiers like it’s nothing. Why couldn’t you let Number 1 keep choking out Logan, William? We all wanted to see that to its glorious end. [divider type=”thin”] At Corporate HQ, Elsie catches ANOTHER employee sexing up a Host. As high-tech as Westworld is folks really expecting not to get caught doing this shit? Elsie examines the body of the Host that attacked her and finds he has a satellite uplink. Somebody’s been stealing company secrets. Just like in Jurassic Park…waaaaait… She takes her findings to Bernard because it wasn’t Orion’s belt. It’s orgy time in Pariah (which is a lot less exciting than it sounds) and we’re left hanging with the only five people with clothes on. Bummer. The head of the Confederados drops some more racist shit like:

“There’s a place in glory for a brown man who knows his rank.”
…#Westworld #SetsInTheWest pic.twitter.com/p8Uyc0HIyu

Racists gotta racist I guess… Dolores notices El Lazo is up to something but keeps it quiet. Logan, tired of William not joining in on fuckboi shenanigans, hit William with the “you ain’t shit, you ain’t never been shit, and you ain’t never gonna be shit” speech. Iiiii don’t think you wanna do that, Logan. William’s clearly on his last fuck and a half. Logan narrowly avoids the fade because William somehow manages to retain that half a fuck.

Dolores sneaks off and finds a fortune-teller, who becomes her Player 1 self sitting on a throne of skulls. She freaks out and catches El Lazo swapping the Confederados’ nitro for tequila. Dolores tries to get William out but William thinks he’s figured the game out. Dolores is like, nah son let’s GTFO. Together. Then they make out. That gets William kicked into high gear and they make their escape. Meanwhile, Logan and his headass, racist brethren are tossing around a bottle of nitro. They drop it like dummies but luckily it’s only tequila (what a waste on so many levels). Dolores and William rush out of orgy town just in time to see Logan catching a four piece and a biscuit courtesy of the Confederados. But that kiss killed that last half a fuck William had. Sorry, Logan, you on your own. Our duo’s almost out when the rest of the Trump Cheer Squad corners them. William takes out one guy but gets jumped. Until he activates Dolores’ Terminator subroutine. Bawse Bish mode activates in slo-mo before Dolores takes the whole crew out because she “…imagined a story where [she] didn’t have to be the damsel.” William’s all the way in love now. It’s alright, catch them feelings!

The two escape on the train headed out of town and run into El Lazo. Dolores ain’t got nothing to lose and is ready to blow the whole train to hell before William calls a truce. Turns out El Lazo is just Lawrence and they’re headed for the maze. And Dolores is ready. [divider type=”thin”] MIB and Teddy stop off at a bar when Ford pops in for a few shots. Ford’s looking a lot less scary after he got punked by Dolores. Ford and MIB trade barbs while Teddy just sits there bleeding out. Apparently, MIB helped save the park after Arnold died. He comes at Ford with a knife and that wakes Teddy the hell up because

Teddy is the epitome of Ride or Die. Like that’s literally all he can do #SetsInTheWest #Westworld

Ford drops the reset code before he bounces and everybody in the club is suddenly ready to go. Even the player piano gets hype.

Felix STILL trying to get his promotion and takes out the bird to work on it a bit more. He gets his code right and the bird gets hit with that act right…

You better work for your promotion, Felix! #SetsInTheWest #Westworld

Just in time to land on Maeve’s finger. She’d been biding her time, waiting to talk to Felix. Don’t know if that promotion’s in the cards for you, bruh.

Final word: Contrapasso – Latin for “suffer the opposite”; used in Dante’s Inferno to describe how punishments in hell were delivered in opposition to the sin in life. Y’all, Westworld is fucked. How this park still open?

See y’all for Episode 6: The Adversary. Tweet with us Sundays at 9pm on #SetsInTheWest