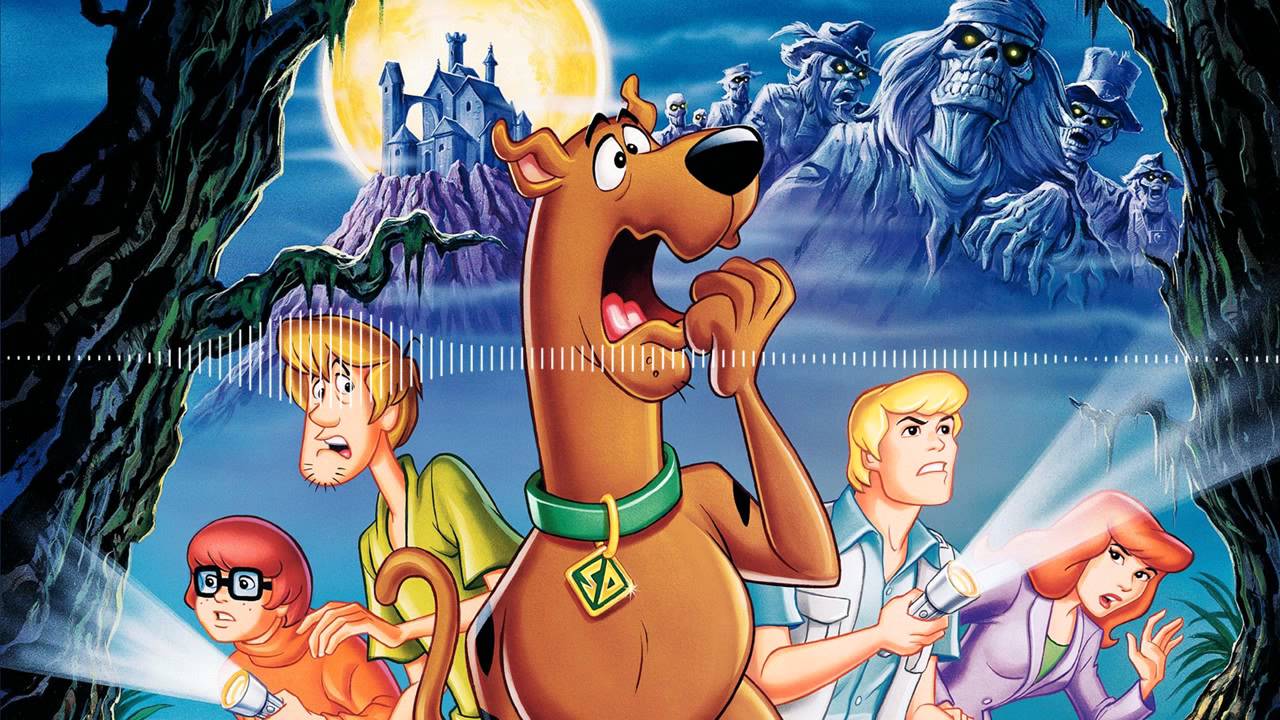 What would SpookMonth be without a classic blast from the past? Am I right, Scoob? Sadly I don’t really have a talking dog but if I did he would’ve said “RATS RIGHT.” It’s time to remember one of the best Scooby-Doo movies of all time — and it might actually be the best one. It’s time to take a trip to Moonscar Island and remember why this movie is still spooky and fresh to this day.

Even though I said “it’s time to remember why this movie is spooky and fresh,” I’m 99.99% sure that no one who has seen this movie has forgotten it. Also, there’s gonna be spoilers for this one because – come on now – it came out in 1998 so I think enough time has passed.

Anyway, the plot of the movie goes a little something like this. The Mystery Inc. gang has broken up and are all doing their own thing. Daphne and Fred are running a T.V. show, Shaggy, and Scooby are bouncing from job to job since they just can’t stop eating confiscated food, and Velma is the owner of a Mystery book store. The gang gets together for Daphne’s birthday and takes a trip to Louisiana for her show to find real ghosts and monsters – and the spooking begins.

At first the trip is a bust with the standard crook in a suit/creep in the mask sort of thing but it also introduces us to one of the reasons why this movie is at the tippy-top of Scooby-Doo movies. The soundtrack. The song “The Ghost is Here” is used in a montage of fake monsters that breaks down the old school Scooby-Doo formula in a fresh way and the song is bangin’.

My favorite was the random Lobster monster and the animation for this whole scene was on point and actually had a pretty creepy atmosphere even for fakes.

Moving right along, the gang gets invited by a pretty young thang named Lena who says her employer’s mansion is really haunted. Of course, no one believes her except for Shaggy and Scooby, but they decide to take a ferry boat to Moonscar Island. What a name right? Whoever made that up needs a raise. Although it might be too late for a raise now. They also meet Snakebite Scruggs who don’t like folks messin’ with his fishin. He’s also voiced by Mark Hamill. 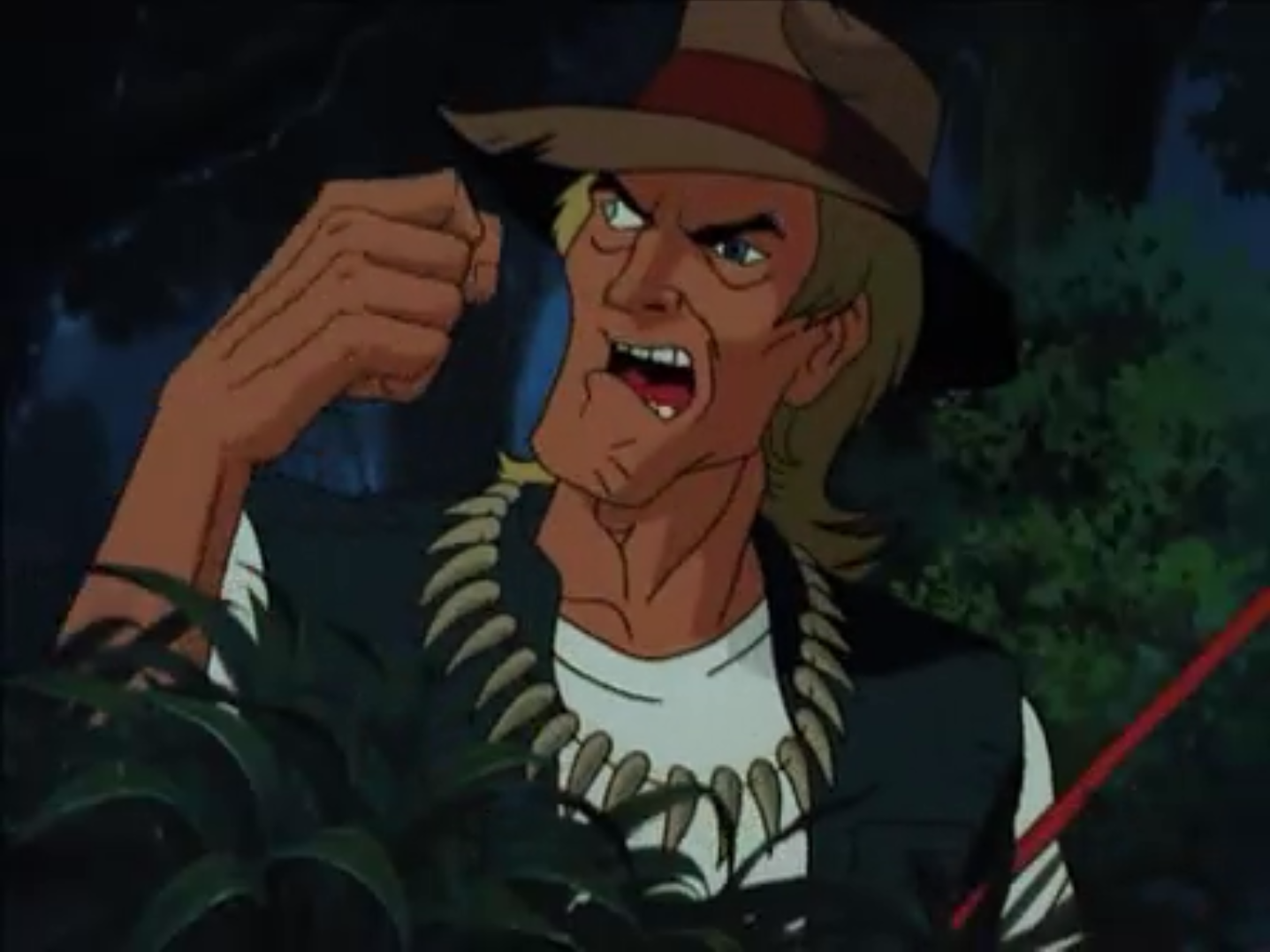 They get to Moonscar Island and meet Simone the employer that Lena was talking about and the true haunting begins. While Scooby and Shaggy are eating as always some writing appears on the wall. “GET OUT” is written in creepy letters and Daphne is excited about it and goes to check it out for her T.V. show. I also want to point out that Daphne looking for haunts is still one of the most entertaining things. While she’s getting ready to film a breeze hits the room and now there’s even more to the writing. “GET OUT BEWARE” is written and Daphne is hyped up for some real spooks.

Simone says that the ferry doesn’t run at night and invites them to spend the night. They agree, but there’s some serious spooky shit going on in this mansion. Shaggy and Scooby see the ghost of a confederate colonel in the mirror and they get so spooked that Simone makes them eat in the mystery machine. While they’re eating a mysterious fog washes over the land and Zombies start to appear. Shaggy tries to drive away but gets the van stuck because he’s better at eating than he is at driving. Fred, Velma, and Daphne go out to go look for them and they run into Simone’s gardener Beau who has been a rather suspicious fellow so Velma decides to stay with him. A zombie kinda sorta creeps up on them and Fred decides to film it thinking it’s just another hoax but as he tries to pull the zombie mask off he realizes that it’s a little harder than usual. He pulls and pulls and finally “pop” goes the zombie head. It comes right off and they realize that the zombies are real and that they’re in real danger.

Now it’s the scene that everyone remembers this movie for. The song that gave this movie that one extra push to solidify it as the greatest Scooby movie. “It’s Terror Time Again” is another song that did it’s job to introduce Scooby-Doo to the new generation. Also, if just reading the title of the song didn’t make you scream “IT’S TERRORRRR TIME AGAIIIN~” then we might have some issues that we have to settle in a Hell In a Cell match.

After that’s done rocking and spooking the shit out of you, Shaggy and Scooby fall down a hole filled with Voodoo dolls and start to play with them which makes the rest of the gang float around or hit each other depending on the actions their dolls made.

Lena screams and Fred, Daphne, Velma and Beau find a secret passage that Lena says Simone was dragged through by zombies. When they enter the passage, there are tracks from Simone’s shoes that signify she wasn’t dragged – she walked there willingly. As this is revealed Lena and Simone use voodoo dolls to trap them there and transform into Werecats… God damn Werecats. 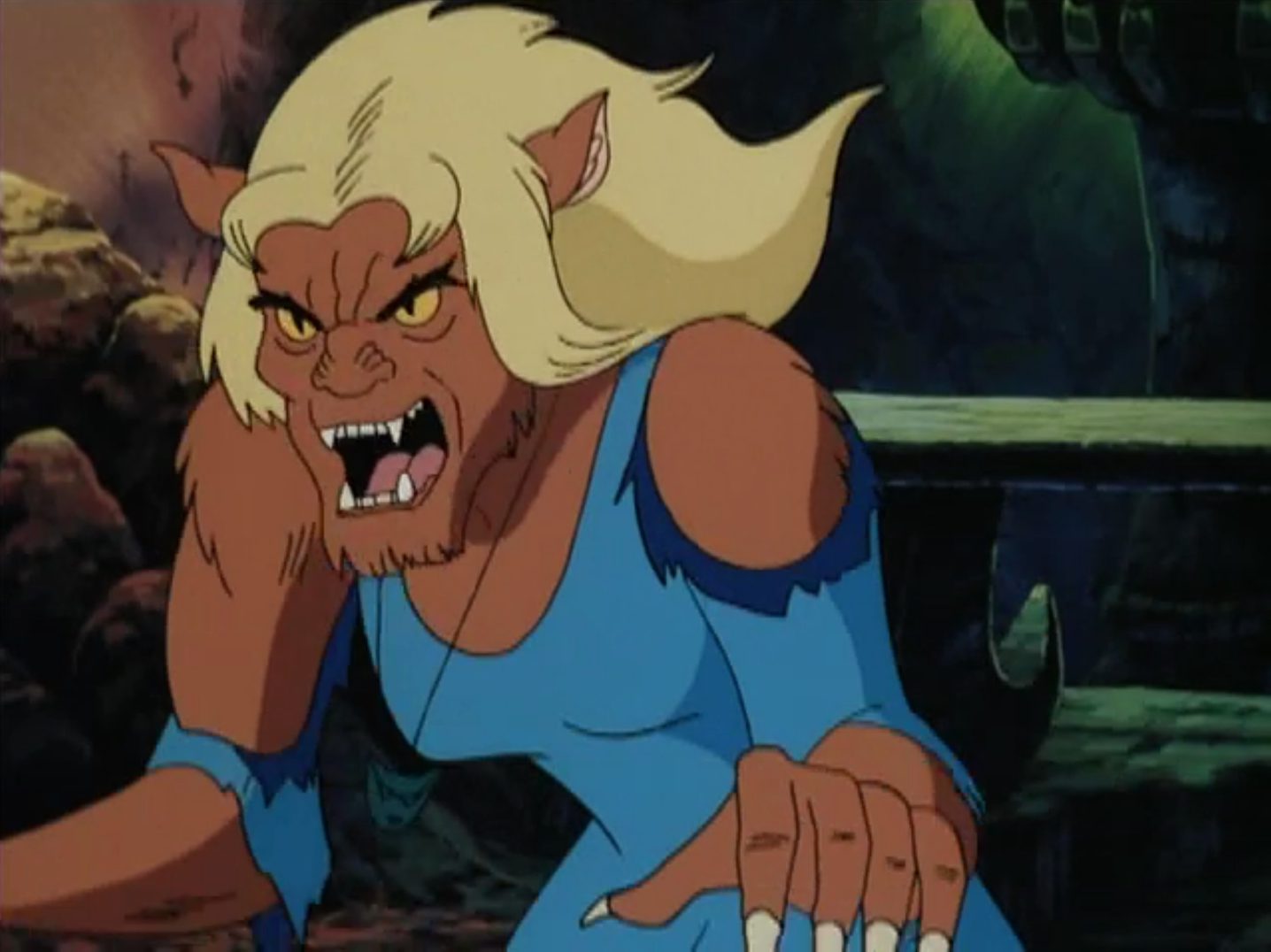 Scooby and Shaggy find Jacques, the friendly ferry driver and begs him to give them a ride off the island but he too turns into a Werecat. WERECATS, IT HAD TO BE WERECATS! Zombies randomly help Scooby and Shaggy and attack Jacques. It’s revealed that Lena and Simone were part of a group of settlers back in 1797 who were devoted to a cat god. While they were celebrating with their kitty god on the night of the Harvest Moon, Morgan Moonscar and his pirates chased the settlers into the Bayou where they were eaten by Alligators. Lena and Simone begged the kitty god to let them get revenge on the pirates and the kitty god blessed them with the power to transform into a Werecat and they murdered the pirates. Yup, a Scooby-Doo movie with a straight up kitty cat powered massacre. Now they have to drain the lifeforce from visitors on the harvest moon to stay immortal. They even gave the ferry driver immortality to bring more people to drain. The zombies were trying to help people who end up on the island so the same thing won’t happen to them. 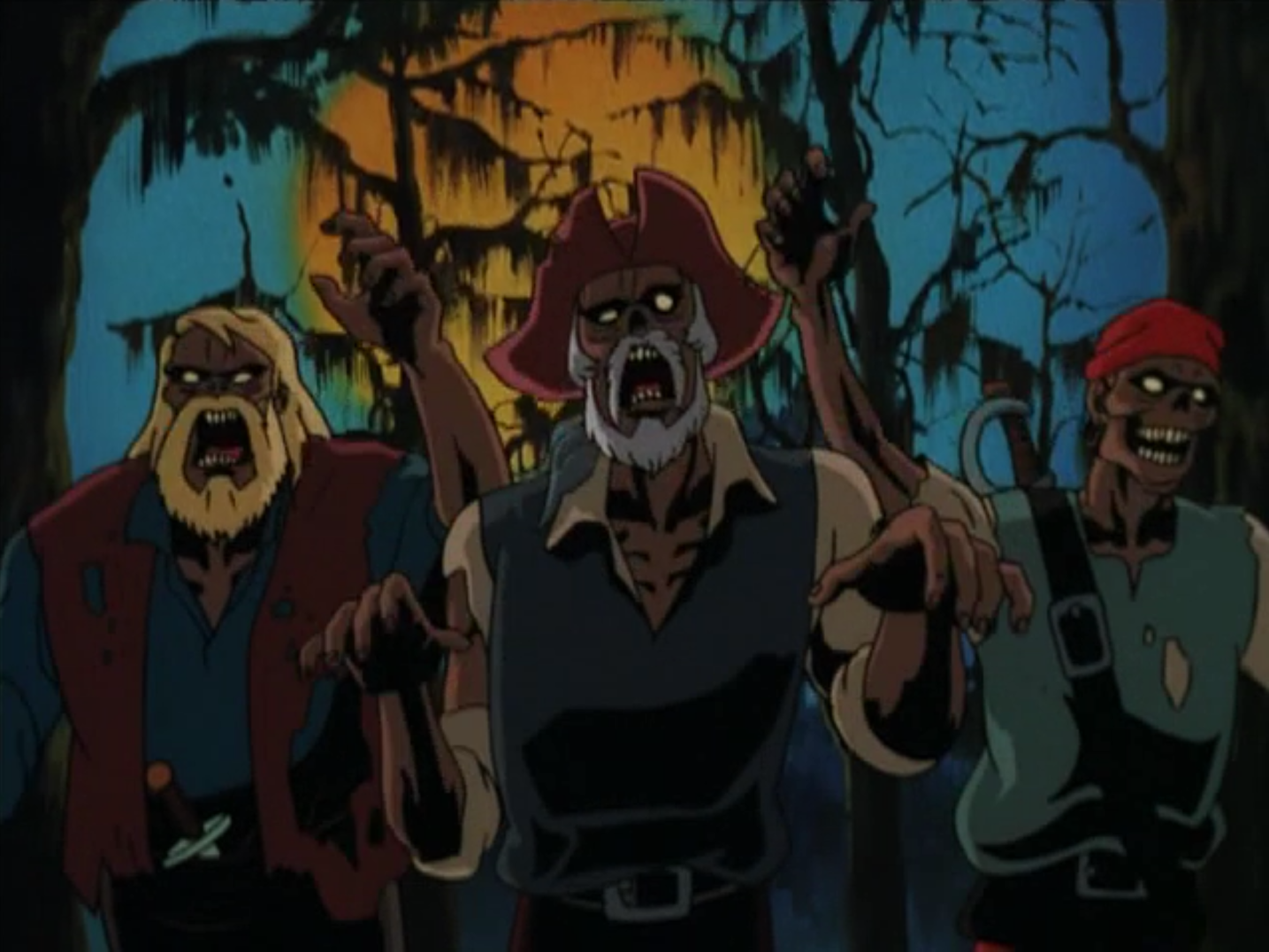 Shaggy and Scooby end up running into the secret passage and amidst all the confusion, Velma and Daphne escape and make voodoo dolls for Lena and Simone using their ripped clothes. They use to voodoo dolls to throw them around and the Harvest moon disappears, hence, turning their bodies into husks as they fade away into dust. Everything is all good now but Daphne lost her footage because her camera fell into quicksand. Beau is then revealed to be an undercover agent (not a very good one considering he almost died) and Daphne invites him to guest star on her show to tell the tale. Thus ends Scooby-Doo on Zombie Island.

This movie was great from start to finish. The soundtrack, animation, and the characters we knew were revamped and reshaped for the new generation. This movie was made to create a new take on Scooby-Doo and it succeeded. I was extremely young when I first saw this movie and even back them I could tell that these characters had a different feel to them that I couldn’t really explain. Daphne and Fred being jealous of each other. Velma being smarter than ever and Shaggy and Scooby helping out accidentally were all things that we had seen before but this movie brought it together better than anything had before it. This movie was so unique because shit straight up got real in it. The zombies were real. The ghosts were real. The insane but still somewhat attractive in a weird hairy way crazy kitty Werecats were real and we loved every second of it. Little nuances like the Zombie handing Shaggy the rope are more than just a little comedy bit if you think about the fact that Zombies were kinda sorta trying to help them.

The zombies actually looked creepy as hell and all the red herrings thrown at us made the story more memorable and exciting. This is still one of the best animated movies almost 20 years later. Do you feel old? I do now I really shouldn’t have said that last sentence…Well anyways Scooby-Doo on Zombie Island will never be forgotten and the fans of the movie will continue to make sure that everyone knows THAT IT’S TERRORRRRR TIME AGAIN. Happy SpookMonth once again y’all.