Nick Spencer took a lot of flak following the release of Captain America: Sam Wilson #1 because people felt that it was too “liberal” and/or don’t like politics finding its way into comics. (You can read our take on this from William Evans: The Traitorous Captain America And The Wrong Side Of History.)

My response to them is simple: Deal with it. To be fair, his name is Captain America, he’s fought both Nazis and Communists and is constantly wrapped in the U.S. flag. He has a long history of being both liberal and political and that won’t stop just because you don’t like it. 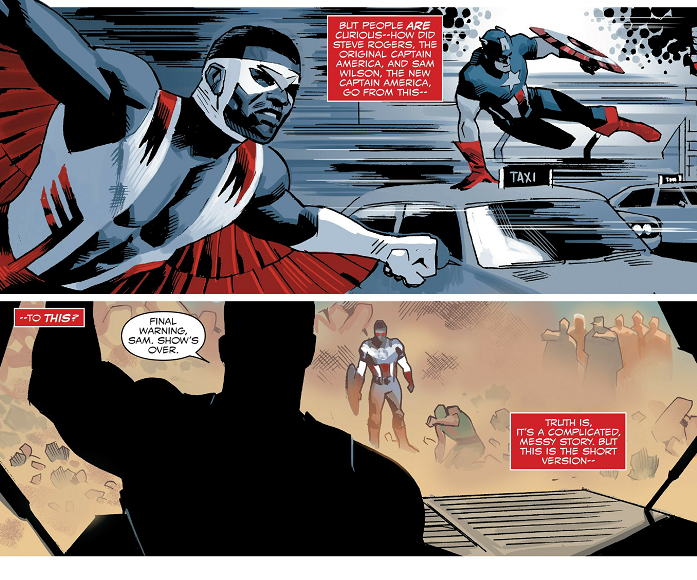 Surprisingly,  Captain America: Sam Wilson #2 didn’t start out with a panel that looks oddly like the crew of “Fox and Friends.” I assume that’s because this issue was done far before this news story picked up steam. Instead, we find Sam Wilson dealing with his new reality in the back of a commercial flight.

The last issue made light references to strict anti-immigration supporters and people that lean far too heavily on tithes to support their personal gains. This week we have what looks like a reference to Eric Snowden and his leaking of confidential government documents to the masses in a character named “The Whisperer.” This anonymous hacktivist is being credited with exposing a proposed plan from S.H.I.E.L.D. that could’ve changed the world forever – for the better or the worse is debatable.

Captain America has always stood up against America’s greatest fears. In his inception, he took on Hitler. After that, he battled Communism. So it’s only appropriate that, in 2015, he takes on what frightens people the most across the board – cybersecurity and an overly involved government.

Outside of that, we see the continuation of Sam’s rift with Steve Rogers. The lazy thing to do would be to say that they don’t get along because Steve is basically Clint Eastwood to Sam’s Nate Parker. Instead, Spencer takes the high road and made their dispute less about politics and more about morals. 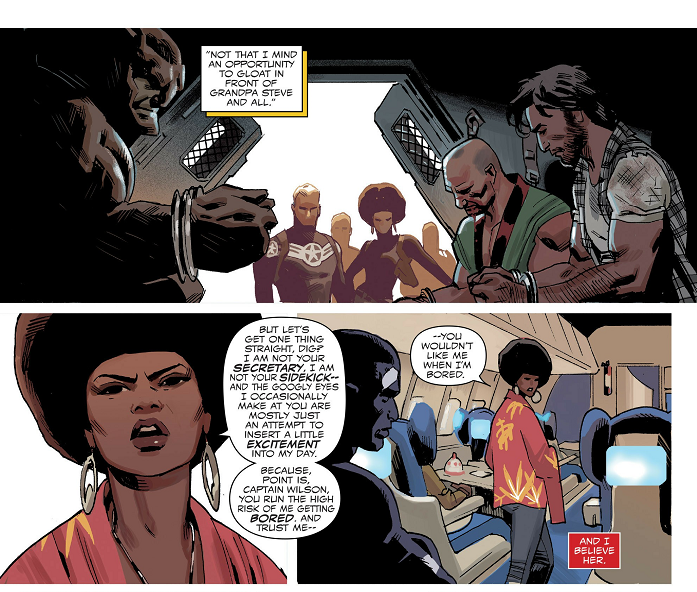 “Because, in his heart, Steve Rogers believes that when the chips are down, when its values are at stake — his country will do what’s right. And me? In my heart? I can only hope it will.” – Sam Wilson

It was also refreshing to see a callback to the story that took place in All-New Captain America with Armadillo. And, as always, Misty Knight is great. Even though we have every reason to believe that Cap and Thor get involved in a few issues, I’m still all for Misty and Cap riding off into the sunset with their fists raised in the air.