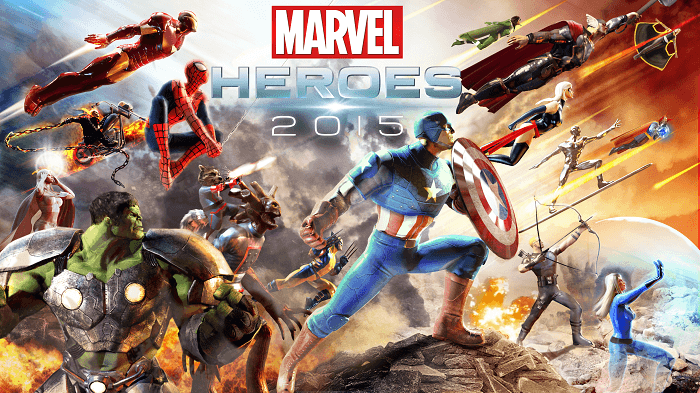 It’s 4pm on a Sunday afternoon and the impending doom of the Monday to follow starts taking hold. I take a seat at my work-desk (read: gaming rig) and launch DayZ, only my clan’s not online and it’d be a hell of a thing to take a bullet to the head trying to take on another squad by myself. I log-off. I start to scroll through my Steam library looking for something to grip me for a couple of hours until I start feeling the anxiety to write or edit or take up some kind of work that won’t have me regret this lull of time that’s passing by. I decide to check the Free-To-Play listings and come upon Marvel Heroes 2015. 2015? I’d seen this title earlier in the year. Oh, it’s a re-branding. Let’s give it a shot.

It’s midnight and I barely notice that my housemate, Omar, had come home. I’m now knee deep in the Old Trainyard plowing through members of The Hand with Cable’s Kinetic Repulsion.

Marvel Heroes’ initial launch was largely a bust, both in pricing model and with it being a largely unfinished game. Marvel Heroes 2015 got a re-branding on June 4th, 2014 that’s not all smoke-n-mirrors. The game is now Free-To-Play and I say that in the truest sense because it’s not at all Pay-To-Win. Yes there is an in-game store but you can jump into this game and level a character all the way up to 60 before even thinking about spending a penny. The store offers you aesthetic advantages such as unlocking your favorite character or a particular costume of theirs that you might favor (you can also unlock characters in-game without buying them from the store). I personally went with Cable’s Techno-Virus look.

Marvel Heroes 2015 is a hack-n-slash MMORPG that resembles a mix of Diablo 3, Path of Exile, DC Universe Online (only, you know… it’s the Marvel Universe) and a little bit of Serious Sam thrown in. It’s built on top of the Unreal Engine, so when you’re overrun by a horde of sentinels your frame rate manages to keep up nicely even with your graphic settings at max. This is a nice detail both for character animations to play out and because of the enormous amount of loot that this game throws at you. If you like loot, this game is definitely for you. You’ll more than likely start dishing out cash to unlock the extra stash lockers that they have built in-game just to store loot for other characters you might want to start leveling at a later play-through.

The power-spec trees are unique for each character and even after you hit the level 60 cap, you can continue to gain Omega experience that allow you to unlock unique stat boosts which can lead to a myriad of unique character builds. Gazillion Studios is the developer for this title and with this re-branding they’ve managed to include a ton of features in this game that keep you interested when you get bored of blasting through bad guys in the story mode. These include login rewards, seasonal and spur of the moment (literally every couple minutes) in-map events, and hero team-ups to encourage building your roster of leveled toons. Gazillion also encourages leveling multiple toons as you receive bonuses that you can pick and choose from, they call this the Hero Synergy System which give you perks from each character you’ve leveled at 22 and 50.

While Gazillion may have taken a page from the popularity of the popular MMORPG, Path of Exile, the true strength of Marvel Heroes 2015 still lies in it being immersed in the Marvel Universe. Much like DC Universe Online thrived because of the immense amount of canon the game had to pull from, Marvel Heroes 2015 will continue to get better because of the story lines they have the liberty of exploring; I, for one, await the day they announce a massive server event for the Onslaught saga.