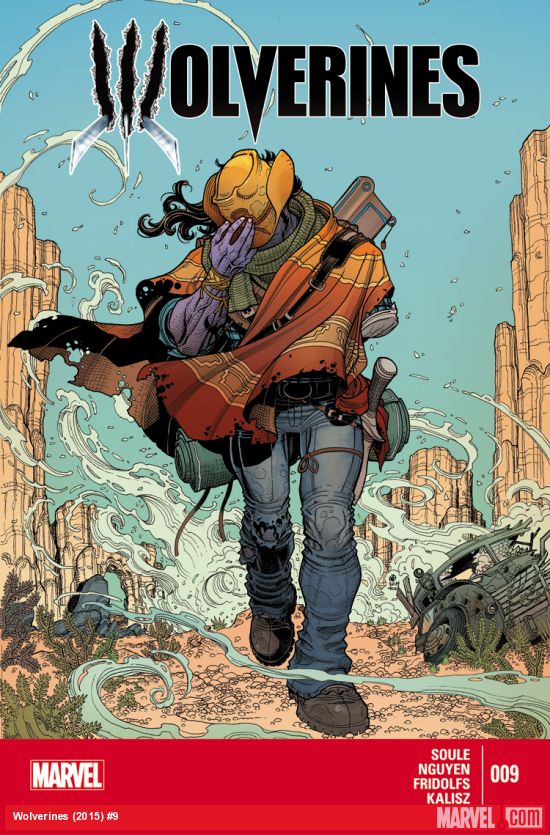 No matter how much we’re told, and no matter how much we believe it, we all do it anyway: judge a book by its cover. After the filler issue that was Wolverines #8 the weight was already stacked against this week’s release, and the homage to Daken’s Wild West doesn’t do it many favors. But that’s only the cover and we know what this series can be capable of (see issue #6), so onward we go.

As it turns out, Wolverines #9 really is the sequel to the previous landfill that was issue #8. Not only that, but it appears to be a segue to an entire sub-plot that stalls the main plot, as each character may go on a soul-searching mission with Fang that leads to the façade of character development. If this were a choose-your-own-adventure book we’d all take a hard pass on this route, but we don’t have that choice. We’re along for this ride despite it slowing to 2 miles per hour.

[divider type=”space_thin”]
The plot for Wolverines #9 goes like this: Fang kidnaps Daken – who is already kidnapped, mind you – and tricks an ice giant into fighting Daken because, well, why not. After Daken survives, Fang restores Daken’s missing arm, and then takes it away 5 minutes later, just to taunt him. Then they return to the rest of the team, and ask whose turn is next to go on a mini-adventure with Fang. Roll credits.

What happened to the kill clock? What happened to servitude, and the Wolverines’ quest for freedom? I never thought I would say this, but can we please get back to hunting Wolverine’s stupid corpse? I don’t even know what this book is about anymore.

What I do know is Wolverines has completely abandoned the sense of urgency from the initial issues, and if it stays on this course much longer we’d get more entertainment from setting our money on fire than buying it every week. I know, it’s a weekly, and that’s automatically rough, but this is beginning to show a lack of effort.