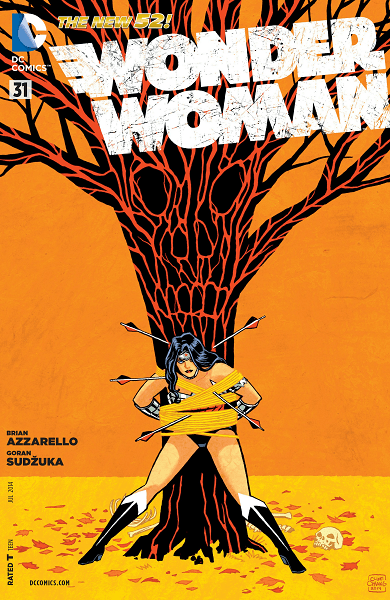 While Wonder Woman continues to be one of the brightest stars for DC’s New 52, the second straight issue of set-up for the big battle coming on Olympus does leave a little wanting. This is still a good issue with some very key moments that will factor into the big battle that is coming, but it spends more time on the Amazon politics. This isn’t uninteresting by any means, but it does slow the plot down quite a bit since we’ve spent close to 30 issues with the Amazons not being a factor at all. What plays at the heart of this issue is Diana still navigating the balance of being a queen and being a god, honoring the traditions of the Amazons and figuring out how to “evolve” them for lack of a better term.

I’d be remiss to not mention some of the social commentary at play here beyond just the comic where Azzarello has found ways to insert men into the Wonder Woman canon. Many were turned away from the altering of Diana’s origin to be born of Zeus instead of being born of clay (ie. of no man), and now for Diana forcing them to embrace raising Zeke on the island. The debate for what these changes really mean as it falls within the shadow of such a feminist symbol as Wonder Woman might be larger than a single issue comic book review, but the changes are not above criticism or scrutiny.

This week, we got some large but brief moments dealing with the gods, in hell specifically, but we spent most of our time on Paradise Island watching Wonder Woman further slide into her role as queen. While not the best installment of the series by any stretch, still a very good issue that keeps its momentum for the oncoming assault on Olympus.