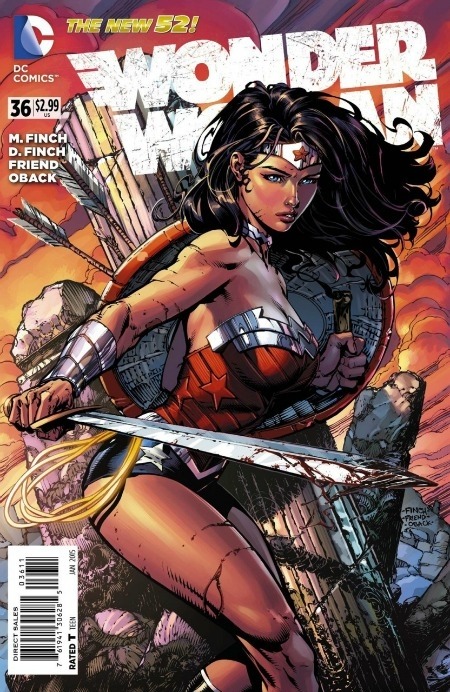 As it is in life, change is constant. It’s a factor that we should always see coming but often neglect to. In regards to comics, there are “changing of the guards”. There are times when teams “pass the mantle”. Or when a beloved artist or writer suits up for another gig. Warren Ellis and Declan Shalvey passed the mantle to Brain Wood and Greg Smallwood on Marvel’s Moon Knight after a six issue run. DC’s Batgirl  on the New 52 reign started with Gail Simone and with Ardian Syaf and has been has gently been  handled to Babs Tarr, Cameron Stewart and Brenden Fletcher resulting in a new envisioning of the iconic character. And here we have the fabulous run on Wonder Woman that Brian Azzarello, Chief Chiang worked on come to a close and new contenders enter the arena.

Married Duo, Meredith and David Finch answered that call and are now, hopefully prepared to bring us our beloved Amazon in all her glory.While I wasn’t totally familiar with artist David Finch’s  name, I certainly was earlier this year when he expressed his thoughts on Wonder Woman  and showed us that he’s yet another person who can sit at the table with folks who obviously don’t know the definition of the “F word”.

So it certainly made us all glad to know that HE wasn’t the one tasked with the writing but Meredith is. Speaking of Meredith, this is her first big comic book writing gig, it wasn’t that long that she first got into the comic writing business. It’s actually been  ten months or so after her first comic was published that now she’s writing Wonder Woman so that’s impressive. Alongside her husband who is the art producing part of their duo, they have very big shoes to fill.

So a fresh start we have here on our hands, this debut issue of the Finches opens to rain falling from the heavens in the first few pages. Water that can of course, “nourish or sustain and also bring devastation and death.” Something on this earth that we can harness and control for our many uses but never something we can ultimately control. This issue opens to death, massive death- the waters washing away a great multitude of people in some sort of environmental catastrophic event as Batman put it. Diana is horror struck at the casualties  and goes to investigate. What we have next is Diana beating the snot, I mean the swamp outta Swamp Thing, whom she rashly decides must be the culprit behind this horrid crime. 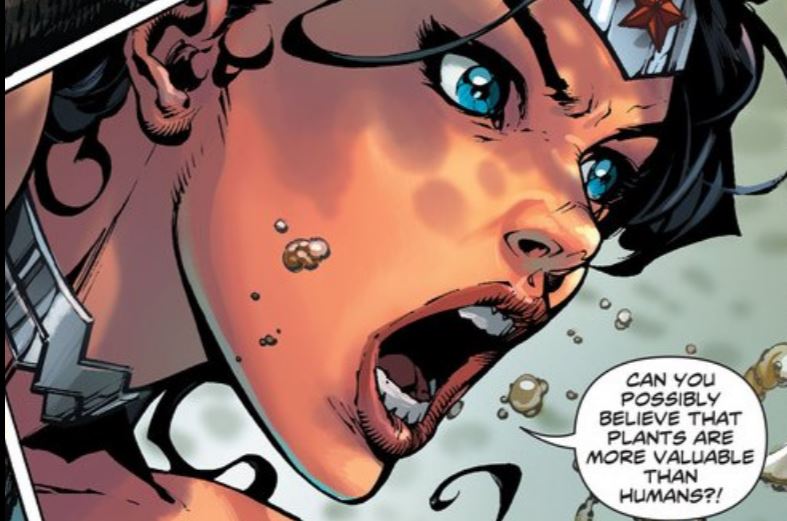 GIRL, Ain’t you met Poison Ivy before? Like, I know she’s in Batman’s neck of the woods but…

No, but in all seriousness, that was bizarre. In theory, it’s Diana: she’s proven to be  hot headed on certain occasions. She’s rash at times. She has a strong sense of justice and when she has an enemy in sight, their ass is surely grass. Afterwards once cooled down and leaving the scene with Aqua Man he does ask her what’s going on. Attempting to give Swamp Thing that WERK wasn’t a good look on her end and he suspects that there’s more to what’s going on. Se reveals to him that she’s overwhelmed. She has a full load of responsibilities and it’s a heavy load. We are reminded that while Mother Dearest is…incapacitated (had to resist a bad pun about clay there.)

D is acting Queen of the Amazons. She’s also a valued member of the Justice League and the world is never not in peril. She has family drama: new family members all Gods, Demi-Gods and the like each their own day time soap opera agendas. The Amazons have their own problems internally with the expansion starter park they acquired with their Amazon brothers. Did I also mentioned that she’s the God of War? 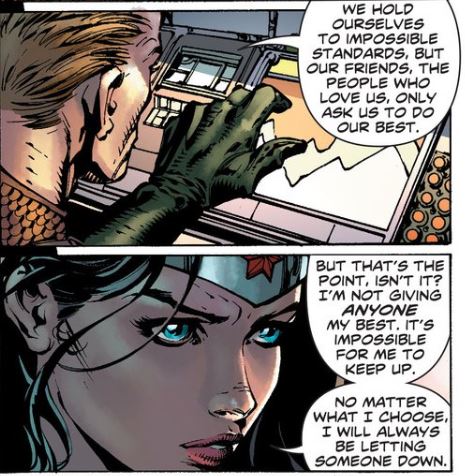 So we see a full on glimpse of a vulnerable Diana, Princess, no Queen of The Amazons.

Vulnerability. A Moment of Insecurity.

As every artist is open to their own interpretation of Wonder Woman, I’m not sold on David’s style of D just yet. She seems young, impossibly young. It’s more in the direction of more of the “Pin Up” style. In the panel where she stands with other member of the JL, she stand outs in the way that I thought (and expressed to another) “She looks like she’s 19, 20 years old, tops”. I’m not throwing him under the bus though because I didn’t feel like he went to Greg Land lengths but let’s just say he hasn’t made to to my favorite artists club just yet. 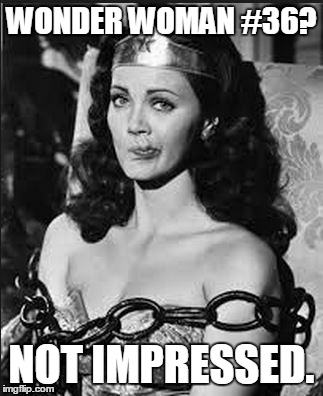 will have to to level up to get some skill points to switch from “Warrior” to “Detective”  in the class system.