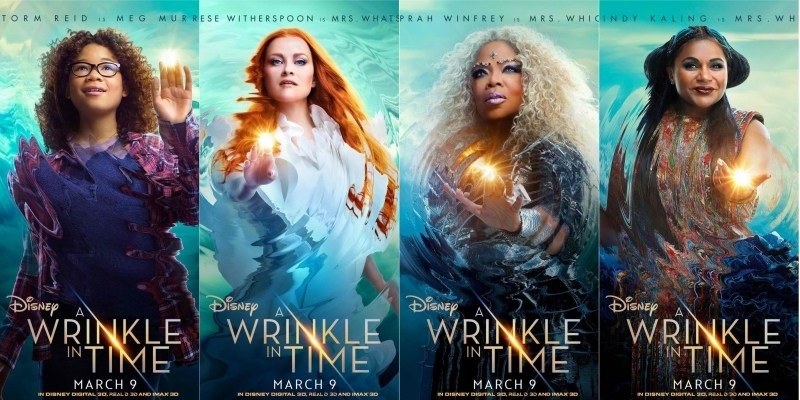 ‘A Wrinkle In Time’ is Exactly What It Should Be: A Family Movie

A Wrinkle in Time follows in the long tradition of Disney live-action movies. You remember Disney movies before they bought up the Star Wars and Marvel cinematic universes? Disney used to make straightforward family movies about a single hero (male, white) going on a quest. The story was about the importance of believing in yourself and being brave. Parents and adults were hapless, clueless, or both. Big siblings took care of little siblings, friends cracked jokes, and the single hero achieved The Big Thing in less than 120 minutes. In that context, A Wrinkle in Time is what it looks like: a Disney family movie.

It is also a Disney family movie where the single hero is a multiracial girl, her sidekick is a white boy who adores her, one of the hapless/clueless parents is a brilliant Black scientist, and the ancient ones the hero looks up to include Oprah W. and Mindy K. in all their 100%, not white glory. A Wrinkle in Time gives the Disney hero treatment to a whole host of people who 30 years ago wouldn’t even be in a Disney movie. Y’all this is a Disney movie (the 2nd one in 2 months) where there are more speaking roles for people of color than for white people. In this context, it is revolutionary.

That’s the thing about Wrinkle — it is simultaneously ordinary and extraordinary.

The Story: Spoilers Ahead! 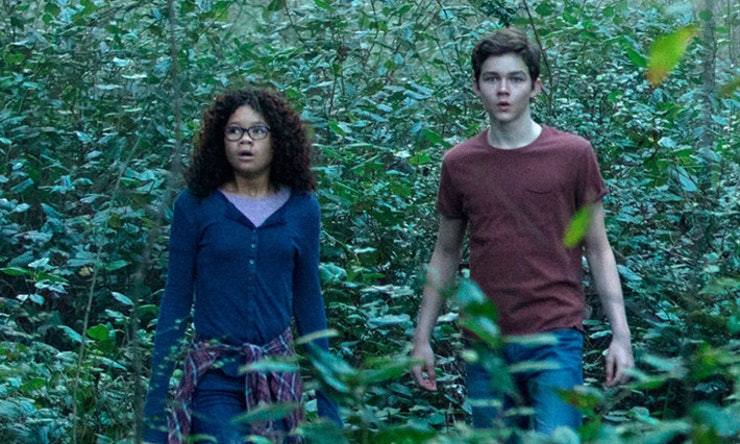 Meg Murray (Storm Reid) was a brilliant pre-teen. Cute. Well-liked. But her father, the eccentric Dr. Mr. Murray (Chris Pine) disappeared a few years ago and Meg is stuck in a depressive cycle she can’t get out of. Supporting her are her little brother (adopted), Charles-Wallace (Deric McCabe), and her mom Dr. Mrs. Murray, who in the credits doesn’t have a first name at all (the luminous and under-utilized Gugu Mbatha-Raw). After some school trouble, Meg and her friend Calvin (Levin Miller) follow Charles-Wallace “through the tesseract” into a magical world where they meet Mrs. Which (Her Grace, Oprah Winfrey), Mrs. Who (Mindy Kaling), and Mrs. Whatsit (Reese Witherspoon). Mrs. Which looks Meg in the face and says “You can save your dad and thereby save the Earth. Are you gonna do that? Are you a warrior?”

Her Grace Oprah can make White women read books by Black women and washing machines fall on a crowd; there’s very little the sound of her voice can’t do. When Oprah looks you all in your eyes and asks you if you’re gonna be a WARRIOR, you say YES. 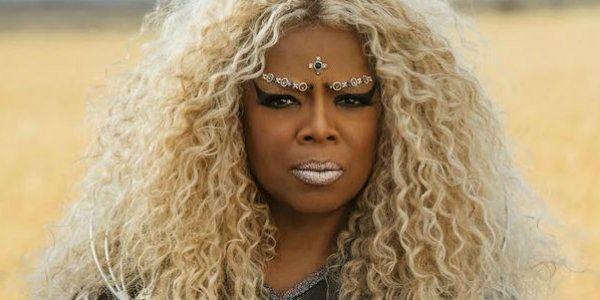 So away the 3 kids go on an adventure. They fly (kids flying in Disney movies is almost mandatory). They consult an oracle, the Happy Medium, a name that is 100% on the nose in a way that only a kid’s movie can get away with (played by Zach Galifianakis). There’s some danger and some creepy moments. All along, Meg solves all the problems with a scientific, inventive, willful intelligence, Calvin tells her how great she is, and Charles-Wallace…well he’s the annoying little brother.

The twist at the back half of the movie is less a twist and more a “and now we’re doing this” moment, lead by a dude in an awful suit (Michael Pena). It is utterly unexplained, which is a weakness of the plot. That low point is contrasted with the high point, when Meg finds her dad through willpower and smarts alone. Pine, still fighting to win the Chris Wars, has the best dad cry ever and Meg…when she sees him and weeps it broke my heart.

In the end, Meg saves everyone by believing in her self, being brave, and embracing her faults. Dr. Mr. Murray admits he shouldn’t have wandered off to do science, proving that adults can get themselves together given a chance. Calvin and Meg share a hug (not a kiss), and all is right again on planet Earth, which now has Meg as its glitter eye-shadow warrior.

There is no shortage of movie reviews and think pieces about A Wrinkle in Time. People, both Black and non-Black, are struggling with comparing Wrinkle to that other big movie of a few weeks ago. When taking in all these opinions, I recommend that you keep in mind the following:

2) These movies are in different genres and have different target audiences.

While principles of plot, pacing and characterization may carry over from movie to movie, we must be careful when comparing a kids movie with an adult action movie. The same way care must be taken when comparing the novel Wrinkle to the comic book of any kind. They have different aims and achieve them in different, related, ways. A sensitivity to that enhances, not diminishes, the entertainment of both genres.

This is diversity and inclusion 101. Black people can produce a variety of media that is designed to be consumed in all kinds of ways. Insisting that there is only one reading of media that is designed/constructed/directed by Black people is reductive. We can do rom-coms, action, drama, and comedy, all in different directions. Not all Black art has to be compared to all other Black art, it should be examined in the context of all its intersections, not just along one. 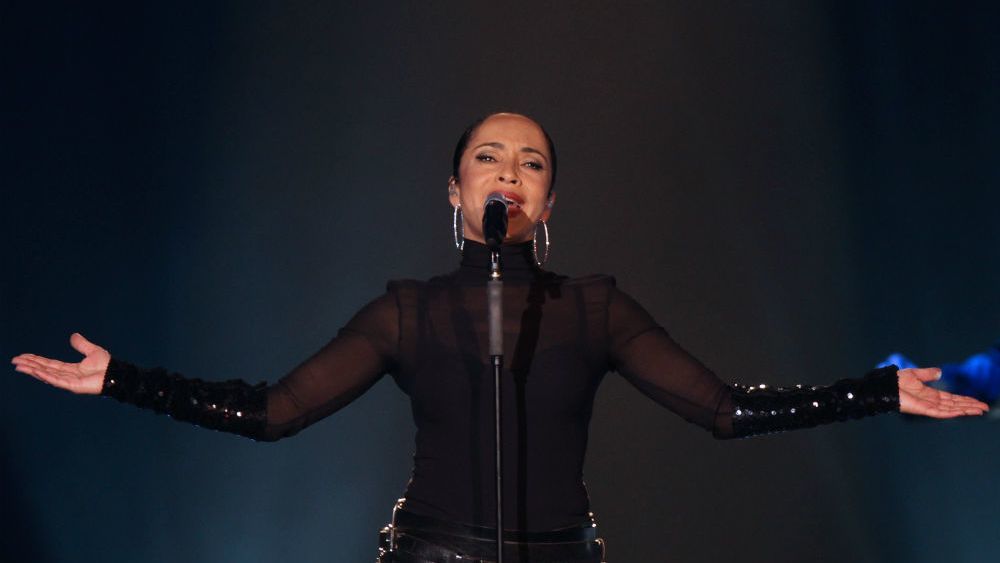 A Black literary and cultural fluency is obvious throughout the entire movie. The school that Meg and Charles-Wallace attend is named after James Baldwin. There are name drop references to Maya Angelou and Toni Morrison. Mrs. Who quotes Rumi, Shakespeare, Andre 3000, and Lin-Manuel Miranda with the same depth of emotion. Sade sings the theme song, “Flower of the Universe“, which is enough to make a parent forget how annoying children can be.

Oprah and Storm Reid fight it out as the best parts of the movie. Part of this is tongue-in-cheek. Her Grace Oprah doesn’t play a character. She’s just Oprah. She stands still, half the movie she doesn’t have legs, and is 3 times as large as everyone else. Her voice booms, her pointing finger moves scenery, and her eyebrows are literally points of light. Every time she said something inspirational, I memorized it for my journal later. Meanwhile, Reid acts her pre-teen heart out in this movie. She hits every emotional note without overdoing it. She stays awkward and stubborn through-out, and completely sells the ending. She grounds the movie and is a perfect center that all the other characters, many of whom are one-dimensional, revolve around.

The book, published back in 1962, has been a staple of recommended reading for girls for years. The whole series is a little weird and a lot emotional, which was perfect for me when I read it. The movie version embraces that weirdness, and the emotional weight of the main character, with abandon. To get those right, it sacrifices pacing and depth of all the other characters. But for the target audience of this movie, that’s a worthwhile sacrifice.

I saw the movie with two Black girls under the age of 10. Every time I checked on them, they were staring rapt at the screen, either nodding or gasping. There were moments they found scary — the loss/found father part was intense for them as well as me — and the ending villain is threatening in a personal way.

Afterward, they told me how much they liked Meg. They thought she was smart and pretty — they liked her hair. Meg’s hair is the movie’s marker for her beauty. One of her early expressions of confidence is when she accepts Calvin’s compliment about her hair, a compliment she had previously rejected. When she accepts that yes, she is beautiful you can see her accept every other compliment she’s ever been given all at once. 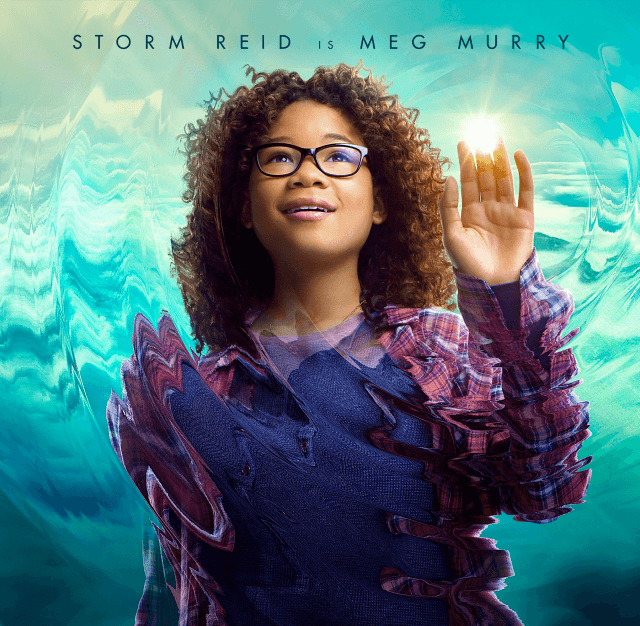 The girls asked me about the darkness, the IT in the movie’s parlance, in people’s hearts. We talked about how when you don’t like yourself, you act that out at other people too. But that Meg had light in her heart and she used her mind to share that with her family and friends. We talked about the other teens in the movie, Calvin and Victoria the neighbor/mean girl, and how they can change now that Meg was there being awesome. They got the point of the movie in a way that I’m not sure some adults can: Act right and love yourself. Your light inspires others. To adults, it is corny and predictable. To them, while it is the kind of thing parents say all the time, it was a message as big as Oprah.

A Wrinkle in Time is the kind of movie we’d have watched once in the theater, then caught it once a year on television when it showed at Christmas time. Now, it is the movie that, once it is available, my daughter will have on her iPad in the background while she does other things. Eventually, she’ll forget all about it. Later my daughter will rediscover it and remember how much she loved it and how ordinary yet extraordinary it made her feel.