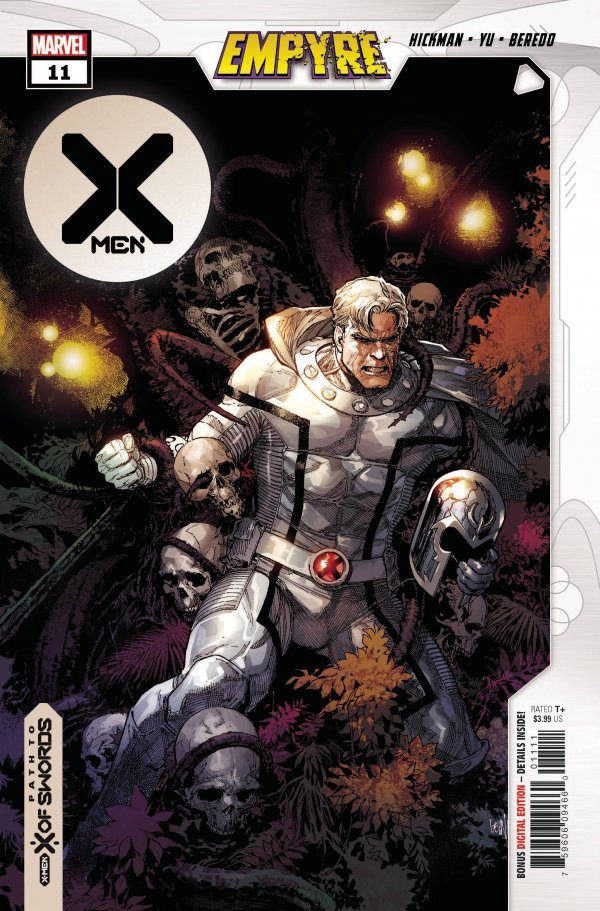 My main complaint about event tie-in comics has always been how forced they commonly seem. As ambitious as a massive event can be, sometimes the corresponding crossover into other books can come off contrived and out of place. A perfectly good run of a top selling book can be ruined by an editorial mandate to shoehorn a popular character into the mix. Fortunately, this isn’t a problem in the latest edition of Jonathan Hickman’s X-Men. As a result of a chance encounter with an X-Man, the Cotati’s moon base has been wiped out. As they set their sights on Earth, they end up picking a fight with the mutant nation of Krakoa. A lot of the book focuses on Magneto’s contribution to the battle, but also takes time to look at how the Krakoan society is being taught to look at him.

Hickman’s script gives the Master of Magnetism an entertaining aristocratic vibe even during action beats that spices up the dialogue. It’s mostly a fast paced open and shut case of Krakoa drawing a line in the sand and showing they’re not to be messed with. Honestly, you could cut and paste any invading force on top of the Cotati and this would still be an effective issue which, granted, doesn’t say much for the villain’s portrayal, but makes for a good read nonetheless. Lenil Francis Yu does a stellar job with the artwork in this issue. The battle is appropriately sprawling and epic looking. Every panel puts you right in the heart of the mayhem.

Bottom Line: It’s a breath of fresh air to read a tie-in (of sorts) that doesn’t feel like a tie-in. Very fun read.

8 Ian McKellan speeches out of 10