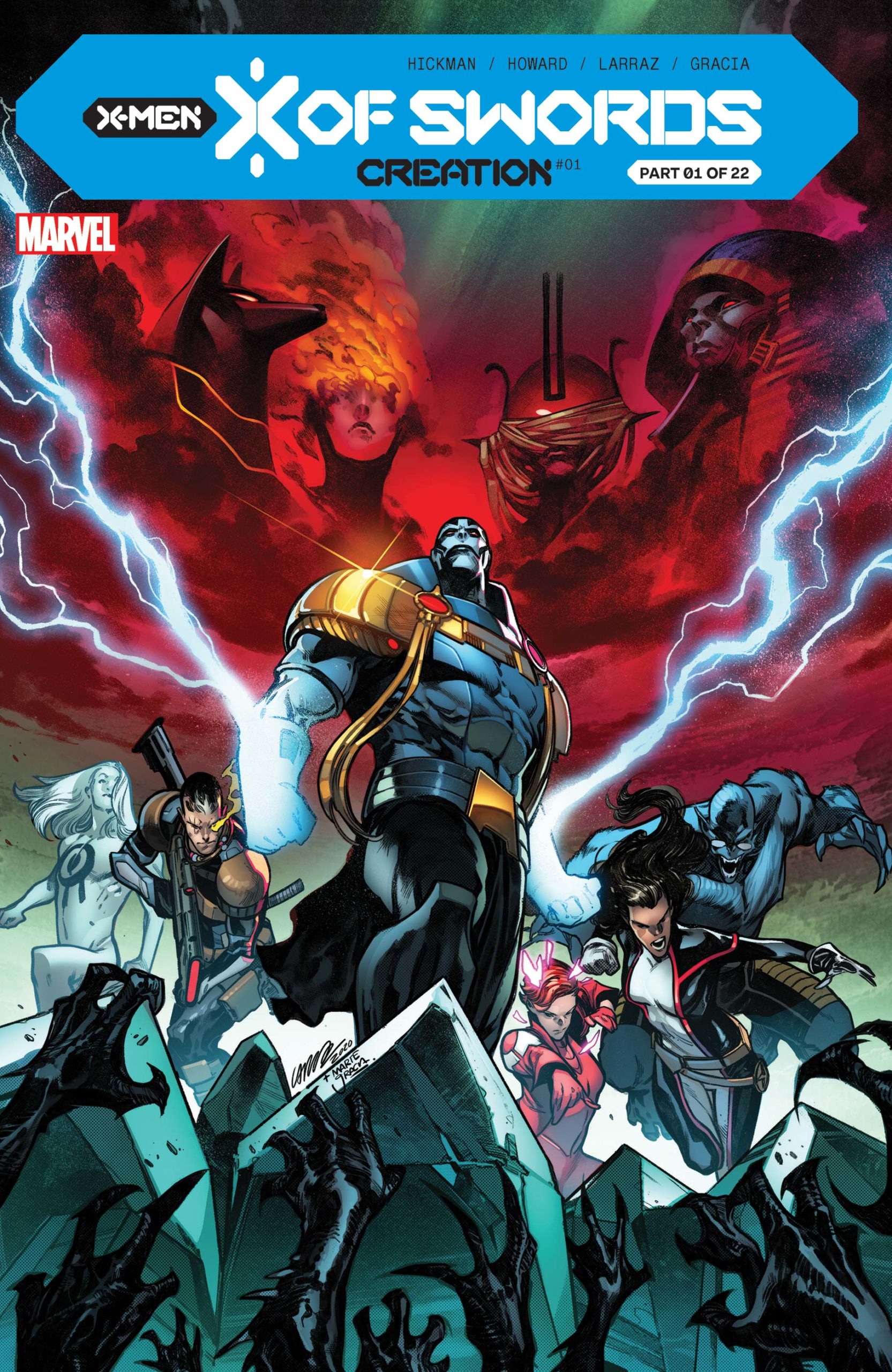 X of Swords: Creation #1 sets the stage for the war that’s been brewing between the X-Men and these no-longer so mysterious warriors of another dimension that are coming for the mutants, their lunch money. and the island they now call home! Writers Jonathan Hickman and Tini Howard used this book beautifully to build upon the breadcrumbs that Hickman littered all throughout the “Dawn of X” relaunch.

It is Easier to Make War Than Make Peace

We already knew that way way wayyyy back in the day Krakoa was a much bigger piece of land, called Okkara, until a weapon called The Twilight Sword cut Okkara into two halves: Krakoa and Arakko.

What we didn’t know was this ancient realm that Okkara is from is called Otherworld. This place is also home to a very dark half called Amenth. X of Swords divulged some spicy details about the war that Apocalypse was at the forefront of. When the warrior God in blue led an army against the forces of Amenth, much more went down than just the severance of Okkara. The war ended with Arakko, Apocalypse’s wife Genesis, and his original Four Horsemen being trapped in Amenth without any knowledge of how they turned out for Bast knows how many years.

All Warfare is Based on Deception

Turns out Apocalypse’s OG Four Horsemen (that he calls his children) not only survived thousands of years of war but also endured that hell in order to be reunited with their father. And then they betrayed that man and let everyone know that them VILLAINS BACKKKKKKKKK!!!

“Thousands of years ago, I gave up half the world to stop these monsters. All that cost was… my wife, my children, and scores of god-like mutants whose names you have never heard — I surrendered everything to stop this. So… a proper assessment? The threat is real.”

Apocalypse dropped quite the speech to get the Quiet Council to ok a volunteer mission to Otherworld and now we know why. The monsters, the God-like mutants that were left behind have their sights set on Krakoa and now there’s a sword wielding battle between the Champions of Arrako and the Champions of Otherworld on the horizon. Now, let’s meet the baddies, the swords that they’ll be using and some key new players.

While Apocalypse has had a number of incarnations, these original four may be the most badass of them all. Unfortunately, the comic book industry is a walking, talking, googling spoiler fest, so we know War and Death will still be around once X of Swords: Statis drops at the end of October after chapters 2-10. With War being the mother of Summoner and Death playing the part of leader of these OG Horsemen, that makes sense. Now I’m reallll invested in the ways that Famine and Pestilence go out…or evolve..or whatever.

Classified: This villain seems to be an important upcoming figure. Not only is this individual wearing Egyptian clothing similar to War and Death (PEEP THE BELT GAME), but she also seems to be the center of attention, in the Stasis cover.

Summoner: We’ve all gotten to know and hate the traitorous grandchild of Apocalypse, but after he was able to pry Rockslide’s only weakness out of him, then slice his essence in two, I’d like to know a little more about this pale asshole.

Isca the Unbeaten: Quite frankly, the name speaks for itself, but we learned how far she is willing to go to ensure her pristine record. During the centuries old war between the mutants of Arakko and the Amenthi Demons, her powers allowed her to see that Arakko was destined to lose, so Isca betrayed her own kind and joined Annihilation’s army because all she does is win.

Pogg Urr-Pogg: This rocky creature got the mean gater face. The size of him is straight menacing.

Redroot The Forest: This thing looks like a legit problem. I feel like Krakoa..and Groot are going to hate this dude.

The White Sword: When you’re named after a sword, you a natural born killa.

Bei the Blood Moon: The name sounds terrifying, and that’s good enough for me.

Muramasa: With a little of Wolverine’s soul and blood intertwined into this blade, we can fully expect Logan to enter battle with this bad boy. Now the only question is if it will be the Muramasa that was just described or the Black Blade that drives its user mad? Perhaps we will be seeing both..

Sword of Might: I don’t really know whether Betsy or Brian will be wielding this as Captain Britain when the battle pops off. Betsy has been in most of the promo images and her twin kind of failed Merlin’s test, but Brian is in one image straight up holding the Sword of Might. They’ll both probably wind up putting in work.

Grasscutter: The other half of Godkiller. Will Gorgon wield or shall it be another?

Godkiller: The other half of Grasscuter. Will Gorgon wield or shall it be another?
Perhaps a duel wielding affair?

Warlock: Cypher and Warlock are best friends, so we can fully expect the technosuit to be deployed. I hope we get to see them do some new and exciting shapeshifting things.

The Light of Galador: Yeahhh…Cable stole some Spaceknights’ sword and massacred their entire race and then went home and got a pat on the back from Cyclops. The blade is incredibly cool and powerful though.

The Soulsword: “Eight years, gone in seconds. From childhood lost, comes a creature grown. A young girl’s friends used as weapons honed a woman’s soul into a blade of her own.” Magik will be wielding the Soulsword and is most definitely ready for this fight.

The “New” Blades: The Starlight Sword, The Scarab, & Skybreaker. Smart money is on Apocalypse, wielding that khopesh blade that’s most likely named Scarab. Storm and Skybreaker go hand in hand. The Starlight Sword is a toss up but my guess is one of the Captain Britains. Magneto is my dark horse.

Like Khaleesi, Saturnyne has many names along with immense power. We don’t yet know what her angle is. Perhaps she wants to save the Citadel, or to play puppet master, but this 10 v 10 X-Men crossover is entirely her doing.

The X-Men have really racked up a slew of new enemies in what seems like a short time. Those crazy flaying XENO freaks, the post-human Children of the Vault, The Pale Girl and her next level psychic powers, Dracula and his vampire army sippin on Wolverine blood like whiskey, Coven Akabba, and arguably the most dangerous one of them all; Hominus Verendi. A group of intelligent, wealthy, and psycho children hopped up on Human Over Everything juice can take over countries and accomplish astounding feats.

The X-Men have a full plate of problems and these children of Apocalypse are the latest dose of painful reality for the mutants. Accepting all of your former enemies sounded like a great way to eliminate opposition but a bevy of new villains have arrived to test the X-Men and defenders of Krakoa.