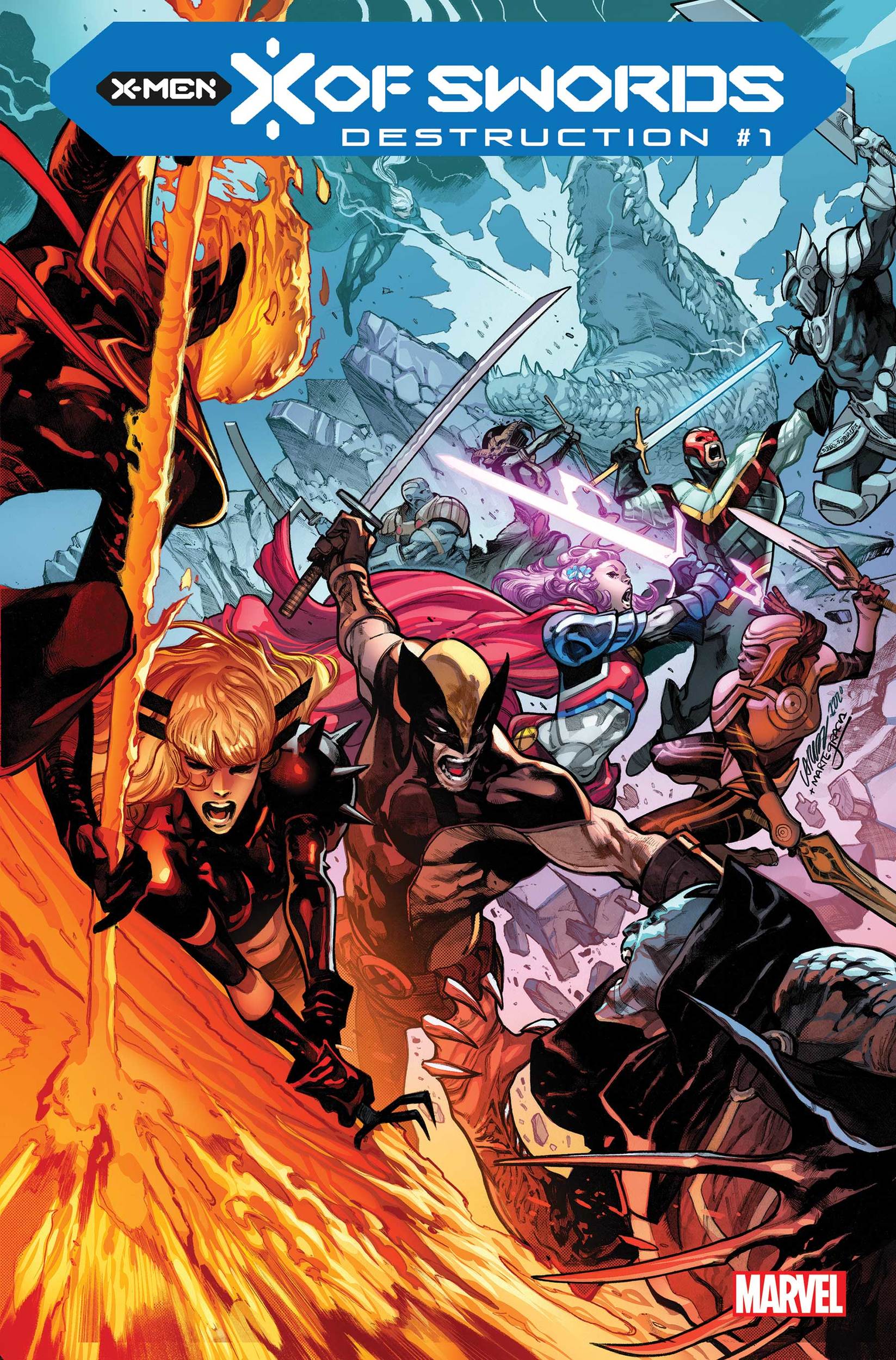 The final installment of the 22-part crossover event was an epic undertaking, and I’m impressed Hickman and Howard managed to pull of such feat. X of Swords: Destruction #1 spanned different realms, universes, and worlds and shook up this little sector of the Marvel universe. Pepe Larraz is an absolute beast for taking on the massive burden of drawing this finale! With Marte Gracia’s colors bringing it all together, this finely polished artwork showcases the wild way “Dawn of X” comes to a close.

Return of the Captain Britain Corps

One of the biggest surprises was witnessing Saturnyne restore the Corps, all of whom now resemble Betsy Braddock (to a degree). Oh how spurned she must be after she couldn’t rope her beloved Brian back into her clutches and instead wound up with scores of the purple haired Captain she tried to rid herself of.

The Corps’ return couldn’t have come at a better time, as the daemons of Amenth surround our heroes. Annihilation, the Children of Apocalypse, and their Summoners respond by unleashing monstrous hell upon everyone in sight.

As if trading gargantuan blows between opposing forces, Magik teleports Cyclops, Marvel Girl, and an army of mutants to Otherworld, bolstering their forces. Cyclops drops another iconic all-or-nothing speech, and the oftentimes reserved heroes come out the gates throwing realm shaking haymakers!

The action, battles, and classic X-Men conflict is on display in grand fashion. There are many competing storylines and explorations of characters, which can make things a bit disjointed, but Pepe Larraz helps to create an incredibly fluid book that allows both experienced and new comic book readers to follow along easily.

By the end of this culminating issue, a few things become painfully clear. Apocalypse, who serves as the central mutant in this entire conflict, becomes the selfless leader he has been claiming himself as. Opal Luna Saturnyne, the Omniversal Majestrix, can now be touted as one of the most impressive puppetmasters in the X-Men universe. All that occurs was either foreseen or orchestrated by her and her place as the ruler of Otherworld and protector of the Onmiverse is cemented for anyone paying attention.

Apocalypse officially ends this tournament by making 2 explosive decisions. On one end, he sacrifices himself, not to be seen for quite some time. On the other end, he makes a call that will bring equal parts prosperity and turmoil to Krakoa.

After the Dawn Comes the Reign

With this, “Dawn of X” comes to a close and Hickman is onto the next mutant saga! As Editor-in-Chief C.B. Cebulski explains, “Like Dawn of X and X of Swords before it, REIGN OF X has been meticulously crafted by Jonathan Hickman and all the other uncanny X-writers of our day, and we can’t wait for you to see what they’ve cooked up!”

New images that have surfaced this week are apparently very telling of what is to come in the near future. We can expect to receive some big pay offs from heroes like Emma Frost, Nightcrawler, Angel and Monet, Cyclops and Jean, Cypher and his new Arraki wife, Storm, and more!