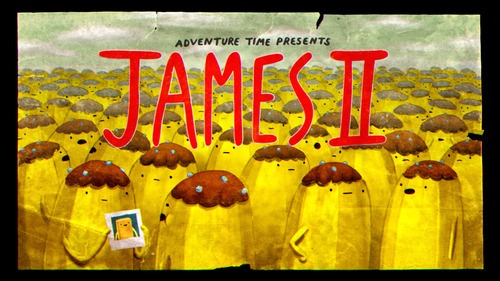 “Pimping Aint Easy and Neither is Cloning”

Warning this episode contains lots of

At this point in the game, you’d think that Princess BP could fill a little black book of all the failed experiments (Notable example: The Earl LemonGrab) and all the catastrophic events that happened because well…science.

This episode is a departure from the “right in the feels, I have the sads” and cruises right into lighter territory.

Finn (with flower arm) and Jake are assisting Princess BP when James, an icecream type sandwich type citizen of the candy kingdom pushes the princess out of harm’s way and falls to his demise off a cliff “protecting the princess”.

We get a flashback three months earlier where James sacrificed his life to save Finn, Jake and BP on an ill fated mission. At his funeral, BP speaks on his honored sacrifice and then whips out a new James, a clone and awards him for his bravery with a fancy medal.

Back to current time, the three discuss just how often James is killed off protecting the princess, some times stranger than most—-an uncompromising 25 times in total! BP, seemingly irritated calls foul play, stating that she’s not so sure its all heroics involved and that she she refuses to reward bad behavior. She announces that its time that James sleeps that eternal sleep and sends the boys to his house to box up his stuff. A James clone wearing a necklace laden with medals, introduces himself as James Number Two confesses to our heores that he’s been faking deaths in order to collect the coveted medals and to have someone to hang out with.

It looks like BP’s suspicions weren’t too far off the mark.

The boys choose to wash their hands of the matter and literally, “sit this one out”; choosing to literally sit down for om a distance and wait to see the Princess’ reaction to finding all the James.

And they are NOT disappointed.

The clones escape—-and further off into the distance the original James who is now a decaying, toxic thing alongside other zombie like toxic former residents of the candy kingdom rise up and make their way to the castle. Seriously its like Monty Python and Three Stooges Action going on.

It’s good stuff, seriously. Make Sure You don’t miss it.

Once all the James are caught, BP make damn sure to de-medal them, tell them that they aren’t heroes and that they don’t deserve the medals. Just then the Gumball Guardians detect danger and the zombie like, toxic creatures that follow James the first approach the castle. Banana guards are useless. Finn and Jake have the hands full and BP is…in daaaanggeeerrr. You know the drill.

But wait can we cut to the scene where Finn is still being great, regardless that he lost an arm in the last episode?

But back to the James, they sulk nearby, upset on their medals being taken back and also being told that they weren’t heroes. When they see BP trapped and about to be attacked they spring to action: tackling James Number One. In doing this the toxicity of undead James Numero Uno morph all the James into a walking cluster of…James.

Afterwards, at yet ANOTHER ceremony Princess BP awards the collective known as The James with medals for their bravery and banishes them sends them off an a special mission into the wastelands, never to return.

The James run off into the sunset with their medals, Bp exhales having survived another crisis and the candy kingdom sees another day end with more heroes.