‘Rona may have closed our libraries but thank God for the Libby app, so I can receive my books the digital way! Having this access led me to discover Robin Ha’s graphic memoir Almost American Girl that came out earlier this year. The book recounts the fateful journey that young Ha and her mother took from South Korea to emigrate to the United States back in the 90’s when she was a teenager. The story reveals a stunning and endearing read. 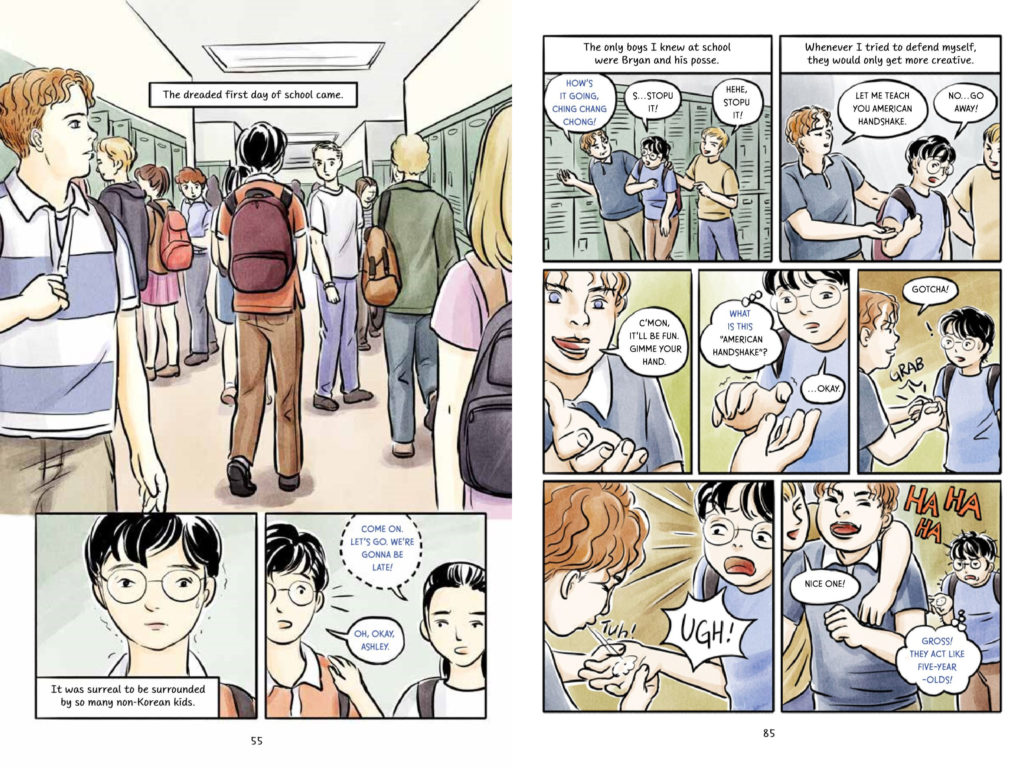 Appropriate for the middle school and high school age range, this tender and moving graphic novel emphasizes the divide young Robin, first introduced with her given, Korean, birth name: Chuna, felt when starting her new life here in America.

This includes alienation, her first brushes with racism and the bewilderment it caused, along with celebrating Halloween for the first time and journaling and so much more. Other things done really well by the author: perfectly illustrating why ESL classes are necessary and how English teachers are the best.

I can’t stress how much I really loved reading this book. I had so many feelings—I was weeping, I was laughing, I was yelling at characters on the pages. Robin Ha did a superb job detailing and elaborating on the loneliness she felt growing up, coming to the U.S. and eventually how she created her own way, growing into who she is today. 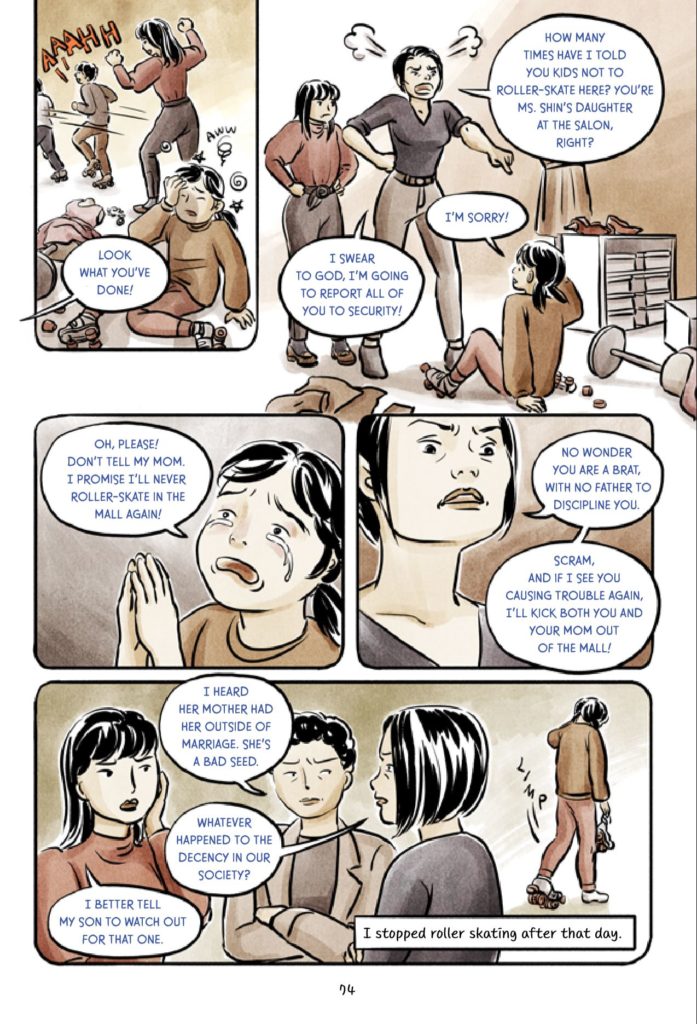 The flashbacks, usually colored in sepia tones, give the necessary backstory putting to paper a Korean mother who was absolutely determined to provide a better life for her child. She  aimed to do so in another country where fewer societal barriers would harm her. Without her father in her life, young Chuna didn’t feel his absence much due to the abundance of love from her mother. Until other folks got involved that is, like school teachers who sought to shame her and nosy people who shouldn’t have had any say on family matters outside their own. The worries that she had to carry as a young child forced on her by adults were pressing. They weighed on her and ultimately helped contribute to her mother’s big decision for the move.

The emotional tether that delves into Chuna’s relationship is a heartfelt one that is relatable and a great talking point for discussion. Readers young and old who have the privilege of having mothers in their lives will be able to see the pull and take of the role of parents and their limits and flaws. Our protagonist is furious that her mother moved them both to Alabama without telling her. It was a huge decision and one that Chuna was not even consulted about. This only added to her teen angst and shaky foundation of trying to navigate her new life here in America.

Comics Will Save The Day! 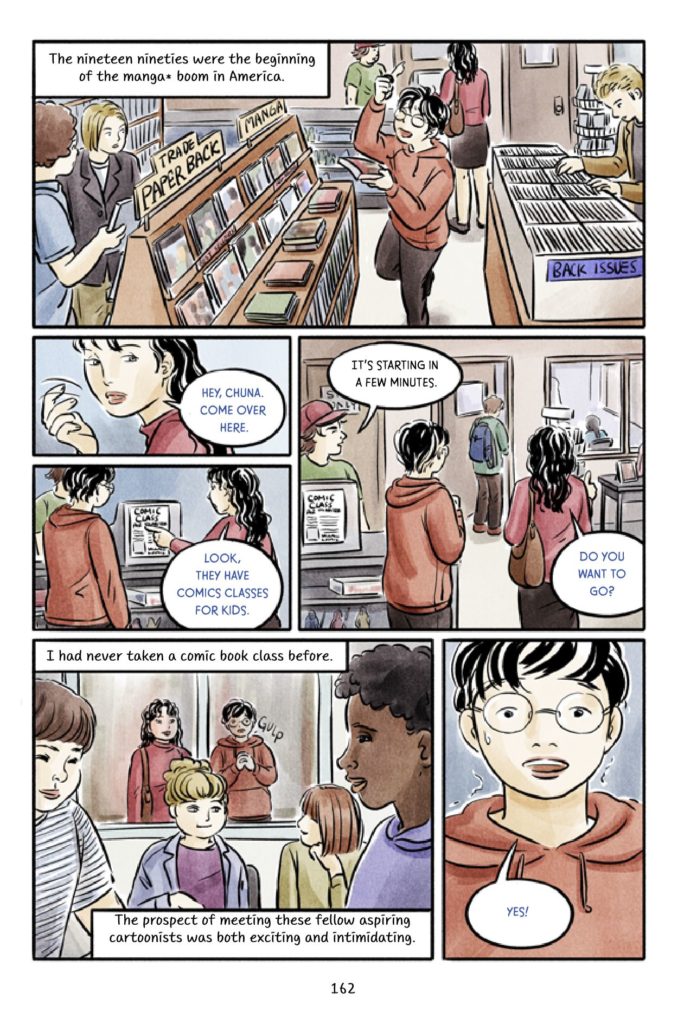 My favorite thread in the narrative of Almost American Girl was how comics (art) will save us. It was thrilling to see the joy of Chuna (Robin) getting her manhwa from Korea & finding common ground here in the U.S. with other girls who liked manga and comics & and creating them. Chuna struggles in the waves with school, making friends, and figuring out cultural differences. Until, after a fight with her mom in which they hadn’t talked in a week, she’s taken to a comic book store! She attends a class for kids on creating comics and it is then when life starts to make more sense; all the pieces start to fall into place.

Gosh, it really took me back to my middle school and high school days of finding friends who also loved comics, manga and everything related and all the fun we had. Befriending a girl from the comics creating class helps Chuna gain more confidence which she applies to other aspects in her life, like improving her social skills and working through her shyness and discomfort. Seeing Chuna’s love of  Korean comics made me think back on the series that I had loved when I was a teen, the influence of them and how girl-centered stories of the Asian Diaspora ring true anywhere, everywhere.

Last thoughts: from jump “Queen’s Quest” (Depicted in the memoir as her favorite Korean comic book is a made up series combining existing Korean comics that she used to love as a kid—instantly made me think of my fave manhwa when I was in high school—*heart squeeze* pic.twitter.com/qrqTcihwmT

I have to note how girls also saved the day–especially here for Chuna. Reading through made me realize the importance of her friendships with girls which was explored and elaborated on in the narrative. From her beloved memories of her girls back in Korea that she read comics and visited stationery stores after school with, to the young lady she went trick or treating with, to the girl at school who stood up for her when someone attempted to make her feel bad about her growing grasp on the English language, to her good friend whom she met in the comics class—girls were the support system that helped carry her through the good and bad times. And while not every relationship with another girl in the book was consistent or was a cherished friendship (and it hit harder closer to home, sadly), it did help Chuna explore the new place she was in and what qualities she wanted the friends in her life to have moving forward.

If you love memoirs in graphic novel form that center girls: Robin Ha’s Almost American Girl is a must-read. Chronicling the author’s move from South Korea to America in the 90’s as a teenager and her struggles to fit in and her joys found in this new place, it is a moving, accessible memoir.  With a couple of instances of “hell,” “bulls–t.” (Thanks for the reminder Common Sense Media!), it is age-appropriate for the middle school and (suggested age 12+ and up) and a great illustrative example of an immigrant’s story in their own words. 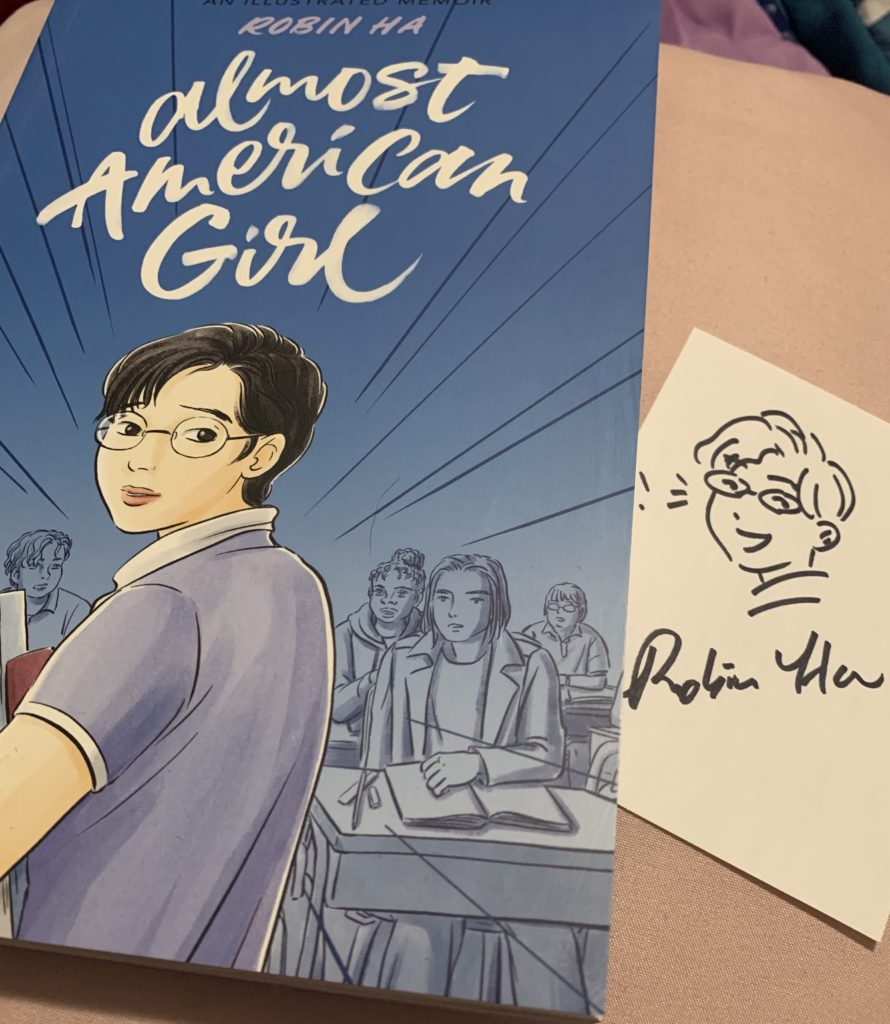 Aptly titled, “Motherland VS. Homeland’, the epilogue touches upon the author’s definition of home and her insight on Korea in terms of gender rules and even conformity when it comes to beauty standards when she visits as an adult, her first time since becoming an American.

It serves as an engaging chapter with so much insight that can be applied to both the Korea and America of today. The author finally becomes the person she was meant to become, the woman she is today: a product of both countries. To read this memoir of the younger version who eventually gets it right is a rich treat.

Robin Ha grew up reading and drawing comics. At fourteen she moved to the United States from Seoul, Korea. After graduating from the Rhode Island School of Design with a BFA in illustration, she moved to New York City and started a career in the fashion industry.

Her work has been published in independent comics anthologies including Secret Identities and The Strumpet, as well as in the pages of Marvel Comics and Heavy Metal Magazine. She is also the author of the bestselling comic recipe book Cook Korean! Visit Robin online and on Twitter and Facebook.

See more of our graphic novel reviews and coverage here. 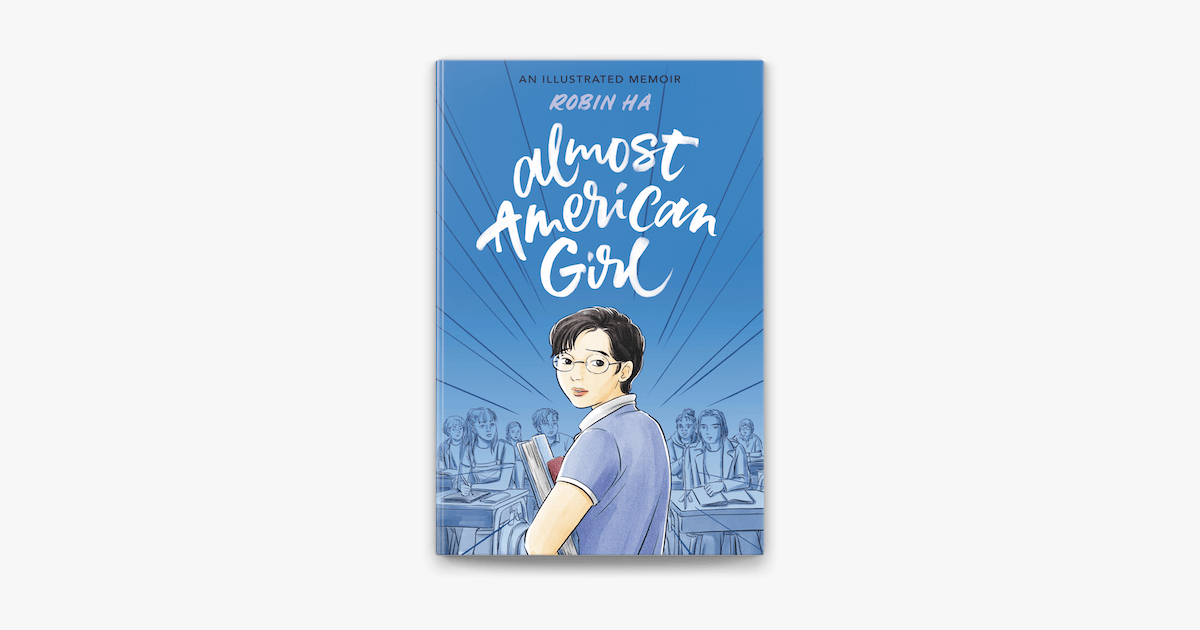