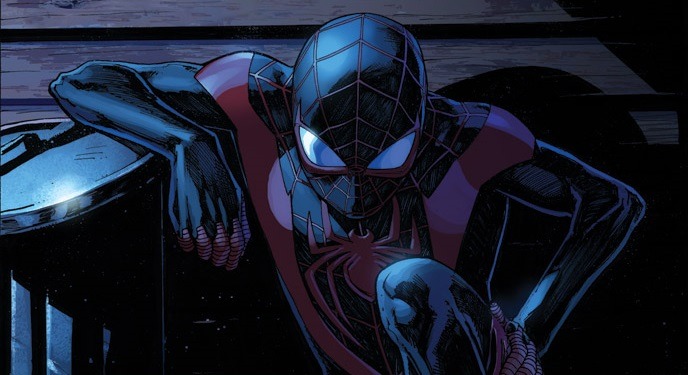 Oh, I’m gonna let you know right now that the i’gnant is about to be too damn high. I been waiting to hop on the track about this shit here. I been waiting for this since Miles Morales got drafted into the 6(16). I been needing this since Bendis had Miles talkin’ that “I just don’t see race” shit in his Spider-Man series. I been fiending for this since Steve Rogers flashed Hydra gang signs. Lemme calm myself. Good Lawd, lemme calm myself ’cause I’m charged up right now. I’m charged up.

Editor Will Evans already addressed the significance behind the cover image of Kamala Khan ripping apart a poster of her idol Carol Danvers on that “never meet your heroes” type shit. But this cover right here? This cover right here with Miles Morales on top of Steve Rogers about to drop that shield on ’em like Miles ’bout to get Steve’s line-up to look Picasso perfect for the fade? This ain’t even on the same plane as Kamala and Carol. We don’t even know where either of them stands, just that they’re on opposing sides, and that’s all the fuck I need to know. This shit goes so hard because if we’re putting Civil War II to the side of the issue, they got Miles out here scrappin’ for the spot. Miles is literally taking the rock from Rogers and about to yam it down from the paint.

Akin to when AJ Styles (FINALLY) came (back, technically) over to WWE and was taking it to Roman Reigns, this cover represents the changing of the guard. Miles is one of the heroes that represents the new legacy in Marvel. That’s what’s got me dumbin’ out right now. That’s what got me back on my New Jersey Drive bullshit. Don’t even come up in this piece if you’re butt-hurt over my joy with this. I don’t wanna see anything about “Oh he’s just happy because a Black boy is flourishing–” YOU BAAST DAMN RIGHT I AM. Again, putting aside what this cover represents for the actual story line of Civil War II, you gotta understand I’m so against the authority. I’m so anti-establishment and pro-underdogs disrespecting the dress code. 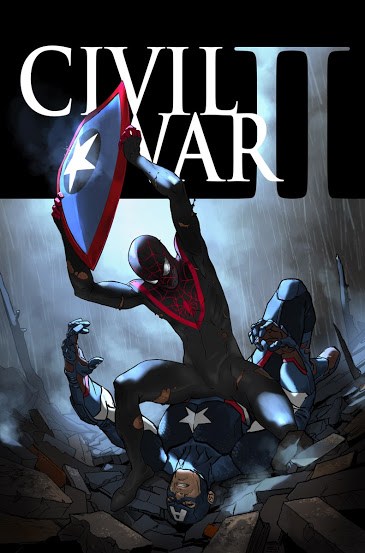 I fucks with Steve Rogers heavy, but this is about what he represents. Steve represents the ideology of the American Dream, and America ain’t really the underdog, fam (much as we want to believe we are). That American Dream hasn’t had the best buying price for a lot of people, and this cover, to me, *gets up from computer and does high knee drills* I SAID DIS HERE COVER, TO ME? This is Miles Morales cashing in on that American Dream (WWE money-in-the-bank style) so he can redistribute it at a discount price.

MILES MORALES LOOKIN’ LIKE HE FREESTYLIN’ OVER SWAY IN THE MORNING’S 5 FINGERS OF DEATH ALL OVER STEVE ROGERS’ CREDIBILITY!