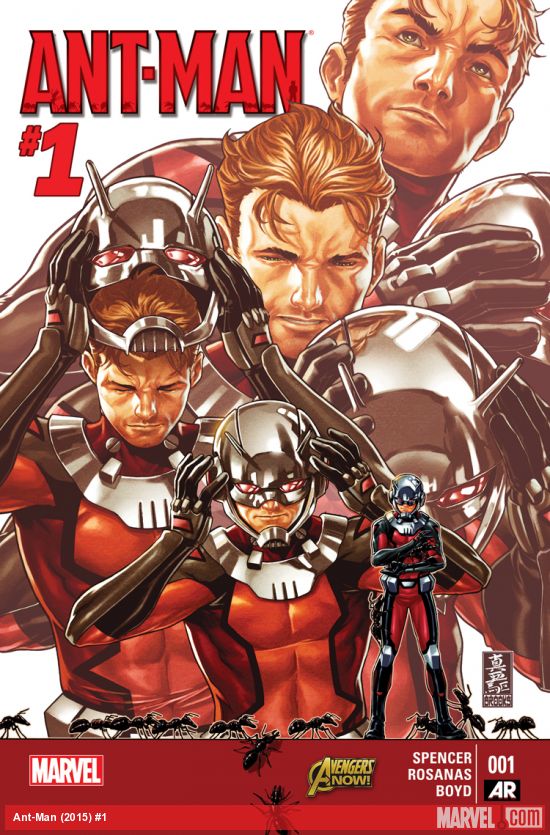 Aight look, Marvel out here getting writers to turn C-List heroes into fucking interesting and compelling characters (Moon Knight is the perfect example). So when that Ant-Man issue #1 trailer dropped post the movie trailer, instead of saying, “Who in the (cyber) streets asking for this?”. As I normally would. I instead decided to just shut up and check this shit out. Yall.. I. AM. SO. FUCKING. GLAD. I. DID. This book is AYETHING!!!

I love a comic book with depth, action, and ass whoopings, that’s a given. Above everything I really enjoy books that takes a hero that considers themself a second stringer and puts them through the fucking ringer with actual real world problems (bills, responsibilities, more bills, self doubt, Sallie Mae) on top of worrying about some villain running amok on their set. Nick Spencer delivers all of this knotted up with charm and humor in this latest installment of Ant-Man. Spencer gives us a quick run down on Scott Lang for thus unfamiliar and this guy is an underdog you immediately want to root for. Spencer has Scott 6 feet deep in the self deprecating humor through out the entire issue and it hooks you in from jump.

Spencer gives us a Scott Lang that is really just trying to get by and do better. We see him applying for a job at Stark International (my man wears his Ant-Man suit to the interview yo!) trying to become (inverted) Tony Stark’s new head of security. Tony has some harsh truths to deliver to Scott on why he won’t even consider it him for it before giving him a chance to show his skills in a competition for the gig. We then see Lang having to go up against some (obscure to some) Marvel characters that are younger than him with abilities that may make them more qualified. These makes Scott have to take drastic measures to make sure he gets the job.

Ramon Rosanas art varies between smooth, slick, and sharp. It’s a very interesting approach he has when displaying Scott shrinking or talking with ants. A lot of the the detail of the ants’ strength in numbers (Lang’s home is a No Raid Zone) is unique in Ramon’s depictions. Ramon & Spencer also make Scott look like a guy you want to root for, especially when you come to find out he is trying to get this job all for his (newly resurrected) daughter Cassie. Their interactions are the creamy nougat filling (I was eating a 3 Musketeers while writing this) of this series. Cassie is always the main motivation behind Lang’s actions. He comes across as a guy that doesn’t stick to anything when in the truth is he is doing what needs to be done to be a good father.

This is a very strong first issue for this book and I hope the momentum continues. Spencer and Ramon have made me emotionally invested in Scott Lang off of one issue, now I’m wondering what they got in store for the rest of the ongoing.