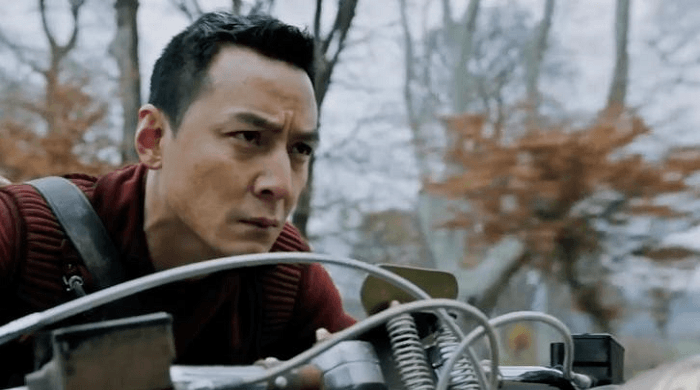 AND YOU SAY CLIPP CITY!!!

Fam, Listen. Listen when I tell you. This Season Finale was for all the real killas out in these Badlands streets. Sunny finds Waldo’s old weapons cache and your boy toolin’ up like Deathstroke. And what else is in the shed? The Old Harley, fam!?!? Your boy got lightweight misty seeing Sunny on the two wheel gawd transport again. Its been so long fam. My body is ready.

Speaking of Waldo, he roll up in Minerva’s personal space to give her council and sees that she been Tony touched up around the face a bit. She tells Waldo that her and Tilda “parted ways.” Which is like saying you asked someone to move during the cookout at the park because they were blocking the sun, when you actually beat the shit out of them and buried them under the basketball court. Waldo is like, yeah, game recognize game you lookin’ mad unfamiliar right now. You done betrayed Veil, Sunny and Tilda in like a week’s time. You gettin’ overtime for this shit, Widow?

Of course, Waldo dropping the bars, but that basically turns into a bumass rapper when Widow talks about making him a Baron after the war is over. You know, the shit she said wasn’t going to exist anymore. Then she start talking that “the people don’t know how to be free yet, they must be taught” shit. But for real, M-Dot…

I feel completely duped, yo. Is this how Trump supporters feel right now? Like, the face I’m making now, is it the same face you make when you realize your Medicare bout to get the Hattori Hanzo slash to it? Well, considering muthafuckas were telling you forever that he was selling snake oil for about two years before the election and you just were so deep in your “economic anxiety,” probably not. But I for real feel betrayed fam. She was never bout this liberation life. This is non-inclusive feminism in it’s final form. Ugh.

Man, Quinn back at the Lazarus Pit giving his Pat Riley speech to his clippers. He giving them the scouting report on Sunny and it really does sound like some “Michael Jordan is coming to MSG next week. And he is better than all of you. But I want to remind you, that if you all just foul yourselves out as quickly as possible and collect some technical fouls, we might have a shot.” These clippers eating this shit up man. Quinn is the cult leader the Badlands probably deserves. 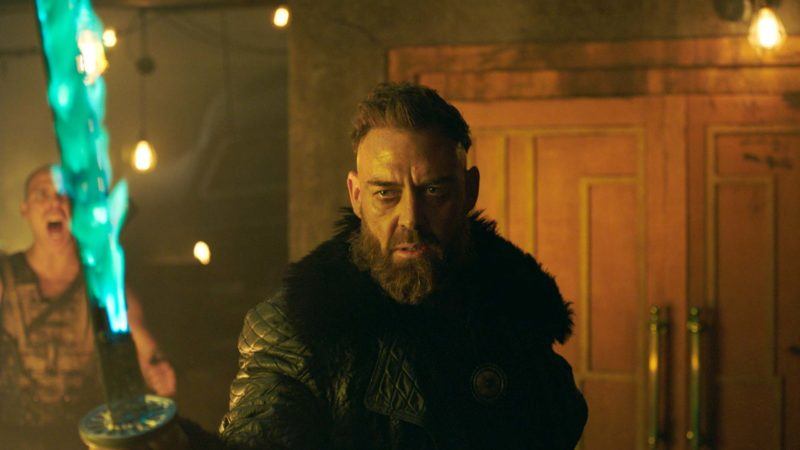 He got these muthafuckas hype as hell when Lydia came through with the CNN fact checker. She’s like, real talk, all you dudes gonna die. And not like, hyperbole, you all gonna die, but this place is a all rigged to explode, so you will literally die.

She tells them all, but ain’t none of these dudes budging. She’s like, look yo, if you don’t believe, I got the reciepts. Nah, Lydia, you gentle, gentle soul. It ain’t that they don’t believe your ass. Its that they probably planted them bombs themselves yo. THESE MUTHAFUCKAS IS GONE LYDIA. For all your experience as a Baron’s wife, how did you not learn how to read the room? She was like John McClain wearing a racist billboard in the hood in Die Hard 3. Quinn was like, ok…so, I think this experiment where I keep you around and you try to kill me has run its course. He orders the Code Red on her and makes his clippers drag her to the forest to dig her own grave.

MK still lookin’ like an extra from Hamilton while Widow talking about how to get his gift back. MK is like, so I thought I told you I was no longer bout that life. Widow like, its cute that you think you have a choice. After almost doing all of us a favor by threatening to kill himself, he demands to see Bajie, who she got chained up. So, just to ensure that there are like, no redeemable muthafuckas outside of the Sunny / Veil family, Widow lets it fly that Bajie only cares about the book and that everything he’s done has been about that. MK, who has seen some truly horrible shit…got his feelings hurt and storms off. How these weak bloodlines be surviving in the Badlands is beyond me.

Widow is still pressing Bajie to translate the book to get MK’s gift back and tells him that his life depends on it.

Can we talk about how efficientyl Lydia dug this perfect ass hole? She finishes and they bout to give her the Maximus soldier’s death when she put the shovel to them and escapes. Last dude standing bout to stalk her down, but SUNNY DA GAWD is in the forest and gives this murderous bastard the throwing knife to the dome. Lydia tells Sunny what’s going down in the Pit with the explosives and shit, but Sunny is like, yeah, I’m still getting my family out of that hell.

Tilda wake up, straight up coughing up blood. I don’t know what transpired beforehand, but if you wake up spitting up blood, chances are you may not have been supposed to wake up in the first place. She in a cell next to Bajie and he’s like, oh, that’s right, Widow hates your ass too. Odessa come to the rescue and Tilda says they need Bajie too, but Bajie is like, oh, you look great in the Monarch gear, but you know a snitch jacket probably fits you better. Odessa don’t like what Tilda bout to do, but Tilda is like, fuck that, there’s business we need to take care of.

Widow tries to manipulate MK, but MK is like, yada yada yada, but fuck me though right? They make a deal that says if MK gets his gift back, he can try to kill her, but if she wins, she owns him. I don’t care if MK gets his gift, the gift of the Magi, Avatar state power and glow of the Golden Child, nothing in this show’s history says this is going to work out for him.

Bajie leading Odessa and Tilda towards an escape and if they weren’t White, they would look like the folks that this administration wouldn’t let into this country. Tilda got on the straight up “forced from my homeland because of the bombings” scarf and coat on. Bajie hotwires the car, but one of the guards, clippers, man-servants…wait. What do we even call the men in the Widow’s regime? They ain’t the real killas. Are they even clippers? Every time we see them, they really just sword fodder. Anyways, this Y chromosome in a Blue coat stops them, but Waldo rolls up and says they are on an important mission. Y chromosome goes back to his whole and Tilda tries to convince Waldo to come with them. Waldo like…yeah, but no. Don’t be out there dying (again), aiight Tinkerbell.

Maaaaan, Sunny roll up in the Pit and shit is about to go down FROM JUMP. This muthafucka Quinn just chillin’ at the foye holding Henry while the blaze archers come out and take aim. Sunny draws that Silver moon from his back like, aiight then. Sunny charges and the let them hot knicks fly.

Sunny dodges about 92% of them, but yo, 8% of fire arrows hitting you is still fucking bad news, yo. Quinn fires one more at explosive in the hallway and the rubble buries Sunny. 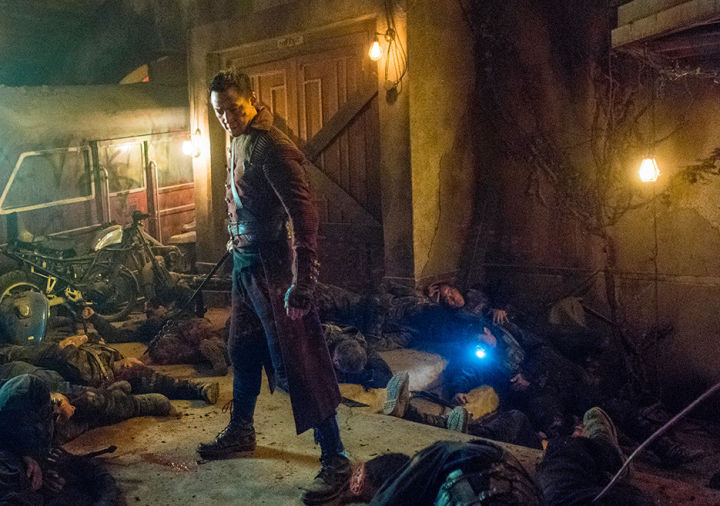 Veil is trapped in the Barbershop and see Sunny come THROUGH. Your boy been waiting on kissing the Fictional Bae again for like 10 episodes and can’t be bothered with door-handles. Bajie comes through and takes out the creeper who was watching the SunnyVeil reunion. They leave and Bajie is obviously feeling himself, so he takes on old boy again. He gives your boy the work and eventually gives him that old glass through the carotid maneuver, but not before he gets stabbed in the flank with some scissors. I agree Bajie, that is a fucked up way to go. He sits down in the salon chair, possibly dying before he found where the compass was pointing or ever getting that beard groomed.

SunnyVeil roll up on Quinn who still lording over Henny Rock. Quinn blows everything up and tells Sunny to put down his sword if he really cares for Henny Rock. But Veil, THE MOST BOUT IT BAE IN THE BADLANDS IS LIKE, NAH B, FUCK ALL THAT TALK, KILL THIS DUDE NOW. NOT NOW, BUT RIGHT NOW. Sheeeiiiit, Sunny like, Boo, you ain’t got to tell me twice.

Sunny and Quinn square up and props to Quinn cuz he still keeping up with the da young gawd. Especially since’s Sunny’s average time to kill is about 3.6 seconds. Nah, let me rephrase that, QUINN OUT HERE FIGHTING WITH THE SPIRIT OF JOHN WICK ON PURE FUCKING WILL. Jesus man. Gash across the side? Fuck that. Stabbed through the back with the Silver Moon blade? We can work with that. He out here like he had all his pain receptors removed and just taking all that damage. Of course, for as Great as a killer as Sunny is, I’m guessing he’s terrible at video games cuz dude never finishes off a boss battle. Like…cut. Quinn’s head. Off.

He got Veil and Henny and see’s Bajie is gone (so I guess not dead yet). Before they bounce, Quinn jumps up and grabs Veil saying that Sunny can take her, but she gotta leave Henny Rock. Man…ya’ll know this is all Sunny’s fault right. Like, 100%. Veil is like, you know what, since you can never finish this shit off, I’ll do it myself, and takes the sai through her chest and Quinn’s.

Sunny got Henny Rock at Veil Da Fictional Bae’s gravesite (also, why Lydia have to dig a legit hole in the ground but everybody else get put above ground with rocks piled on their person).

Bajie is alive af and riding Sunny’s motorcycle where the compass points him. He comes to Gargamel’s tower with the book and stumbles into the basement with this shit lookin’ like mission control. Your boy boots that shit up got the Morse Code poppin for Azra. Hopefully its like the British Navy or some shit that been waiting in the wings to come bring order back to the world, but I guess we gonna have to wait till Season 3 for that shit.

That’s where we at. MK with the Widow, but with no gift. Odessa and Tilda driving into the spirit portal. Sunny is now a single dad. Bajie bleeding out at NASA’s last outpost. And Veil, the finest woman in the Badlands under a foot of rubble. Just another tryst through the Badlands yo. See you next season.