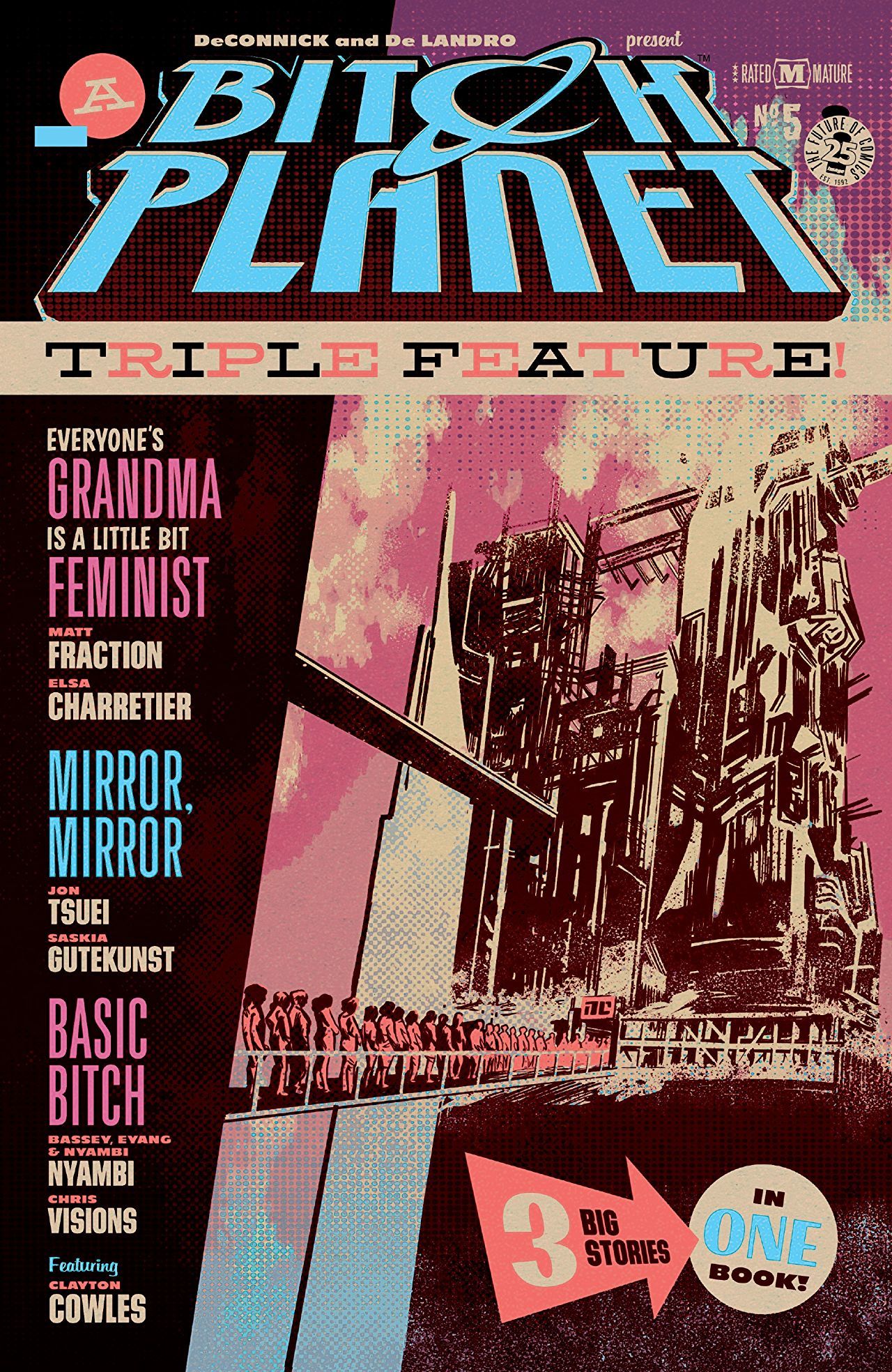 Another round of Bitch Planet Triple Features, another web of stories to get lost in!

Our first story in this issue is titled “Everyone’s Grandma Is A Little Bit Feminist” and on the grounds of its title alone, I knew that we were in for something good. Written by another BNP fave Matt Fraction and illustrated by Elsa Charretier this one here is a special treat in the form of a family gathering around Christmas time with a Nana that is as lovable to us as she is unlike her family. Perhaps what drives this story home in the best way is how micro-aggressions are touched upon–the young lady is bringing her Jewish fiancé home to finally meet her parents and grandmother and it is chuckle- and cringeworthy abound. Nana here steals the show and proves that she disapproves even if that makes her the outcast at this celebration, even if it makes the joint uncomfortable. Fraction penning this tale deftly works in humor, the clashing of generations old and new and some sure-fire great one liners. 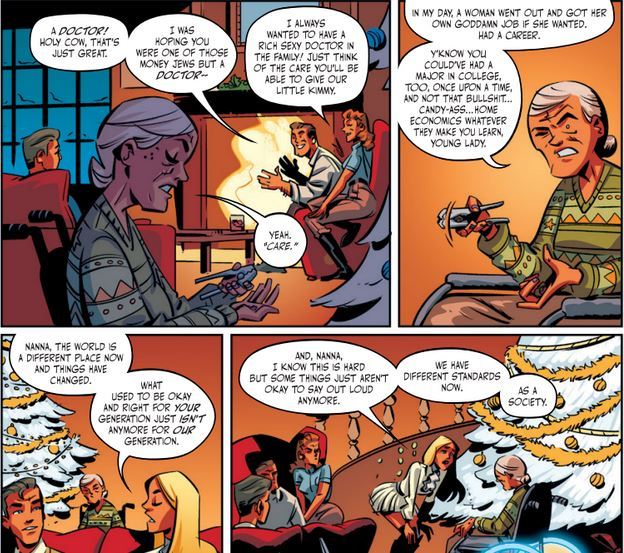 Charretier’s art looked familiar to me because I know she’s illustrated some titles for DC Comics (Harley Quinn, Bomb Shells) and Marvel Comics’ The Unstoppable Wasp. While not intimately familiar with her body of work, I know it when I see it. I always found her art style esthetically pleasing and she details the fun family gathering well. I especially love THE panels where she illustrates the rising tension happening –Nana with the nut cracker staring down David? SUPERB. Truly every comic in this issue has an extraordinary ending that takes the rug from underneath your feet but this ending fits in perhaps a little better in regards to linking it back the Bitch Planet universe of non-compliant women.

The second offering titled “Mirror Mirror” written by Jon Tsuei (RunLoveKill) and illustrated by Saskia Gutekunst. I was reading this short and the strangest thing kept happening to me, my head kept shaking. Seriously. Shaking in the vein of April Ryan because I KNEW THE SET UP. I KNEW WHAT WAS HAPPENING. While this sounds like I’m painting the story telling here as predictable–I’m not. Tsuei does something really amazing here with the changing perspectives of the two central characters in this short and it is best version of social commentary on erasure and how white washed Hollywood is. In this comic a movie studio searching for just the right actor for the lead of their action film and we see two men: Jackson and Van working hard, training and striving for it. 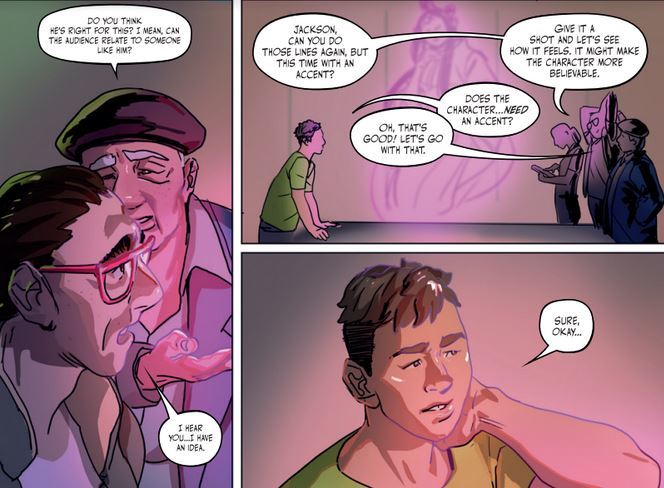 I have to say while all the art present in this issue meshes together with the stories perfectly, of all the art in this entire issue, Gutekunst strikes out here as my fave. Her lush, unique artysle really captures the sense of movement captured in the training scenes and she nails it with the futuristic feel of this place and time. Up to the very last pages I was reading and shaking my head because of also how great this piece looked, I know Tsuei’s work so I figured this would be well written (and it hella is) but being unfamillar with Gutekunst as an artist, I was pleasantly surprised and will now be looking her up for other works I can read featuring her. Together for this story they are a winning combo. It’s orchestrated really well to where even if you think you know what’s going to happen at the end, you’re still shook with the rug snatched from under you. Lastly…I can’t help but acknowledge how perfect it was have Tseui representation-wise, with this entry when I’m pretty sure Marvel dropping the ball and not casting Lewis Tan for the Iron Fist Netflix show still on all, if not most of our minds.

Our last entry, “Basic Bitch” (BIG LAUGH) written by the pheneomenal team of Nyambi Nyambi, Bassey Nyambi and Eyang Nyambi and illustrated by Chris Visions. This last story touches upon the profoundly offensive way Black culture is praised and swallowed up to be spit out and sold on white bodies. Say what now, Carrie? Beloved I said, Black features and things known to Black women and femmes appropriated by white women.  Because everybody wanna be a Black woman but don’t nobody wanna be a black woman. Some girlfriends lacking in the melanin department are out and about living their absolute best lives without a care in the world. Onto the next party, onto the next joint to shake a tail feather at, onto the next big thing to covet and wear and be on top of the game as a trendsetter. It’s too familiar sighting and I don’t have to familiar with keeping up with a certain clan of celebrity family to see the big picture, here. 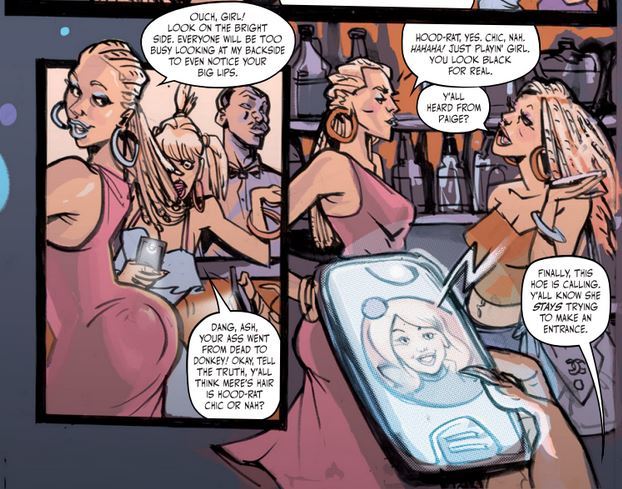 Beloved…I was dead on arrival after finishing this one. “Basic Bitch” unravels into this fantastic phenomenal short that shakes you right to the core. This was the perfect short to finish out this issue and this crop of stories, period.(On that note, y’all PLEASE stop writing opinion pieces with titles like this one. I’d consider it unpaid emotional labor to get y’all up to speed.) Also I think it’s just me but there’s a character that looks to have a certain likeness to an individual who may or may not look like Rachel Dolezal. Visions, the artist on this short works with exaggerated proportions and expressive faces. I also think the slightly muted coloring works well too, especially in the later pages. From the first pages to the last, Basic Bitch was a trip, a journey and let me assure you, it is a ride you should take.

Will there be anther last collection of triple features stories? In the backpages, Kelly Sue hints maybe. Maybe not. I will say that the Bitch Planet universe is the better with these stories. This has been a mostly successfully scenic route to take while Kelly and Val were working on setting up for the main roads, which returns next. It appears our fave Penny has a connection, perhaps a family relation with one special person and I can’t wait to delve into that.