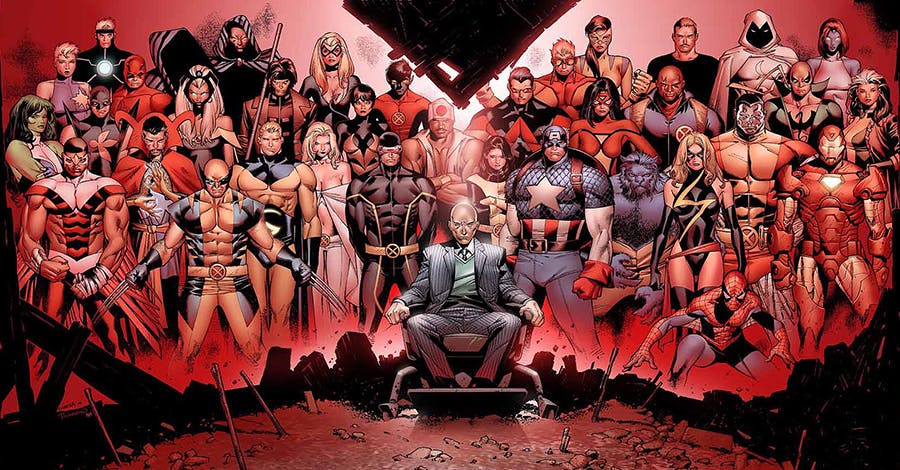 House of M was one of those comics that changed things. It was an event. A spectacle. How could it not be? The X-Men and the Avengers had to come together to decide the fate of a completely unhinged Wanda Maximoff. After she got her husband killed in brutal fashion and delivered the fade to a few of her teammates in Avengers Disassembled, Scarlet Witch became the most estranged hero in the game. Rescued by her father, Magneto, they retreat to Genosha where this story really begins. 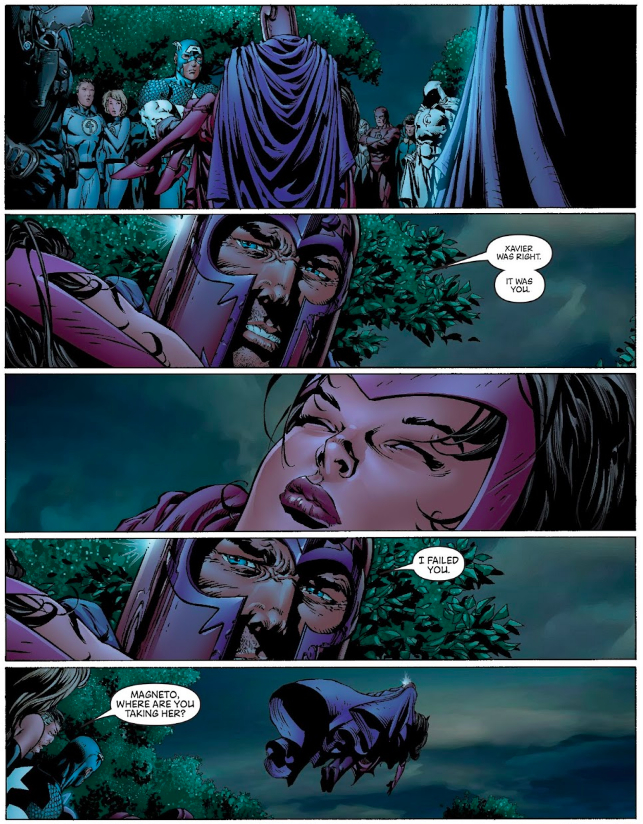 Professor X, Bast praise his tender heart, does everything the most powerful telepath on Earth can do to bring Wanda back to reality. After he struggles to make progress and fails, he resorts to a most unexpected option for a man so filled with hope; do we kill Scarlet Witch or naa?

There is so much to unpack during this time of “consideration” but the conversation I’d like to direct your attention to revolves around the polar opposite viewpoints of Captain America and Wolverine. Cap believes there’s always a way, before resorting to killing and Logan aint wit the merciful shits. Coipel’s Steve Rogers is so dam proud. 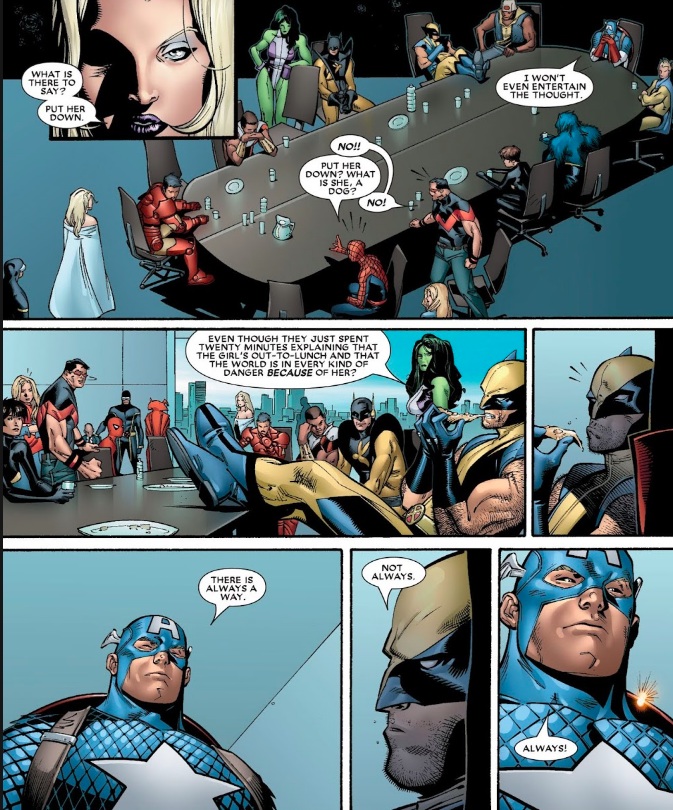 Gone With The Genosha Wind

They address the elephant in the room by going to Genosha to talk to Wanda. On their journey to the razed mutant island, Pietro is livid. We see his loving and protective side go full force and witness a surprisingly meek side of Magneto, who receives the brunt of Quicksilver’s anguish.

House of M starts off as your typical tale about Professor X helping another gifted yet troubled youngster, but it swiftly becomes one for the record books. Olivier Coipel is a monster on the panels and brings Bendis’ story to life with his impeccable illustrations and incredibly detailed facial expressions. Bendis sets this event up in Disassembled like a masterful point guard surveying the court then tossing the ball up to his all star artist who dunks it home.

Wanda of The House Magnus, Keeper of Chaos Magic

What happens next changes the landscape of Marvel comics forever. Everything is different and…crazy amazing? From Peter Parker waking up next to someone not named Mary Jane, who in fact, is off being a movie star, to Luke Cage becoming New York City’s underground overlord rockin impressive braids. Everyone is sunshine and rainbows. They go about their new lives like it’s a run of the mill Tuesday. Everyone, except one gruff guy who remembers everything about the life he had before this facade and is dead set on getting the gang back together and taking down Magneto, Wanda and anyone else who gets in their way.

Sidebar: The Pulse Weekend Extra newspaper cover page was a gem to behold if you took the time to dissect everything going on in this realm’s news. The deep cuts are unbelievable, with my favorite being the Ralph Macchio being a comics guru and helping the largest comic company in the world. Too good. 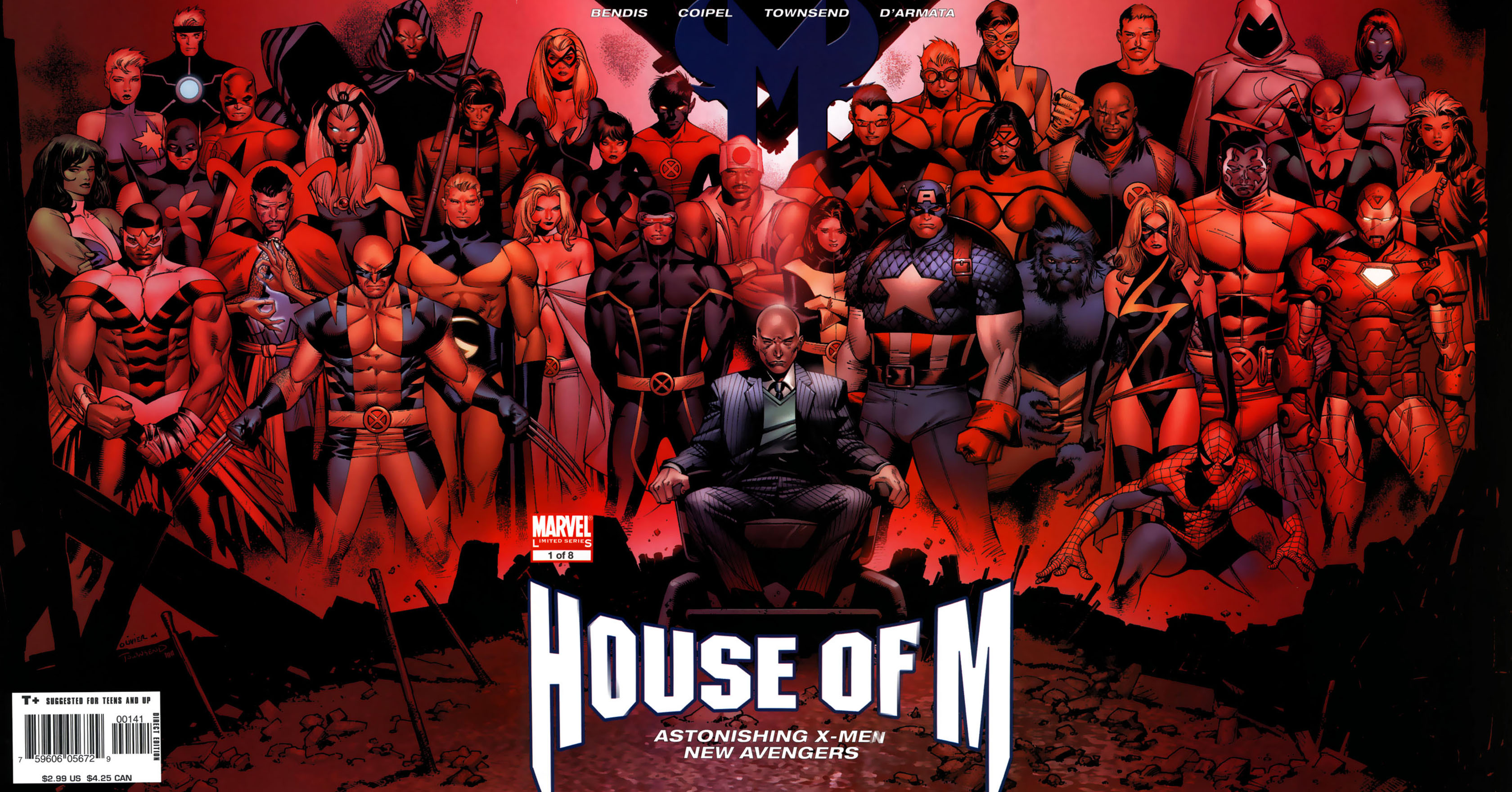 As I devoured this gripping story, one thing became clear about the man with the House of M pen. Bendis knows how to bring the best out of these X-Men, in particular, their leaders.

I love the way Hickman writes his Emma Frost in the new Dawn of X series, but this was one of the most powerful iterations of the White Queen for me. In status and stature, she looms so capable and grandiose in House of M, and is vaulting up my favorite X-Men list. Then we have the other side of the Marvel spectrum, with one Peter Parker. When his memory realization moment comes, it hits him harder than a shoulder from LeBron at full speed. You can feel the pain pouring out of the man so many readers relate to the most. But there’s only so much time to grieve as a hero.. 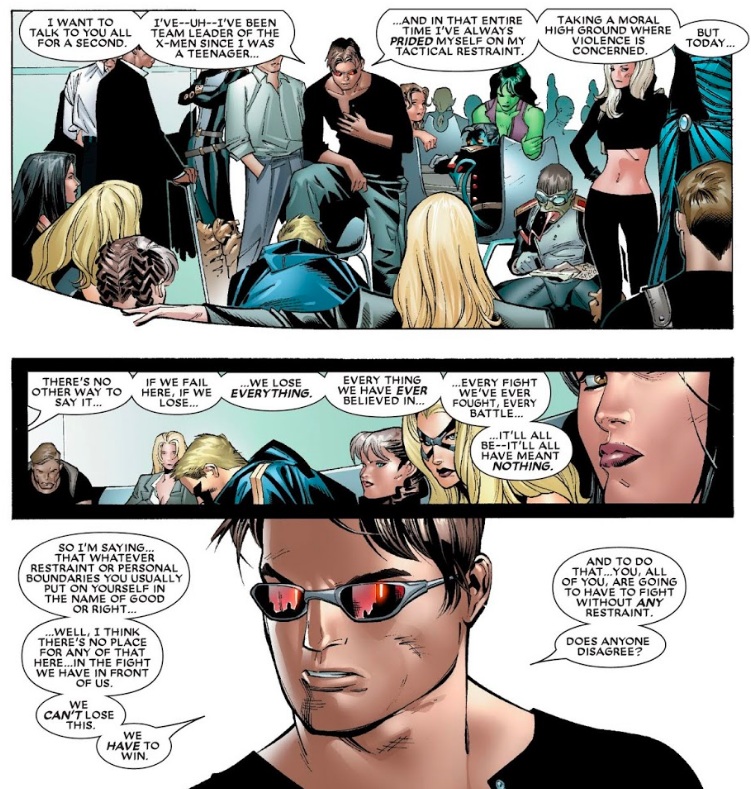 Can I tell you how proud I was to see MY MAN A HUNNIT GRAND Scott Summers assume his position as leader of the X-Men and tactical monster! They had the cinematic music thumping in the background like the end of a Bad Boys movie where they drop the all or nothing speech. He said, “For this fight I’m taking off the Rock Lee ankle weights. I’m removing the DBZ weighted gear. It’s time to crank the One For All percentage up to 100% cuz WE NOT HOLDIN NOTHING BACK!!”

The X-Men and Avengers squad up like 100 deep and ride out to Genosha to take out ayebody reppin the House of Magnus! Doctor Strange plays a key role down the stretch of this 8 issue run, and it was cool to see his powers in action. As he works on Scarlet Witch, the rest of the team throws themselves into an all out battle against heroes you know and love. House of M ends as swiftly as it began. The way Coipel depicts Magneto’s rage when he realizes what strings were pulled to make this alternate reality happen, was incredible. Watching this man draw Wanda going OFF was a true delight in the rare moments we saw the sorceress. 3 iconic words are all that need to be spoken for the world to remade once again, and in an even more horrific fashion than the last.