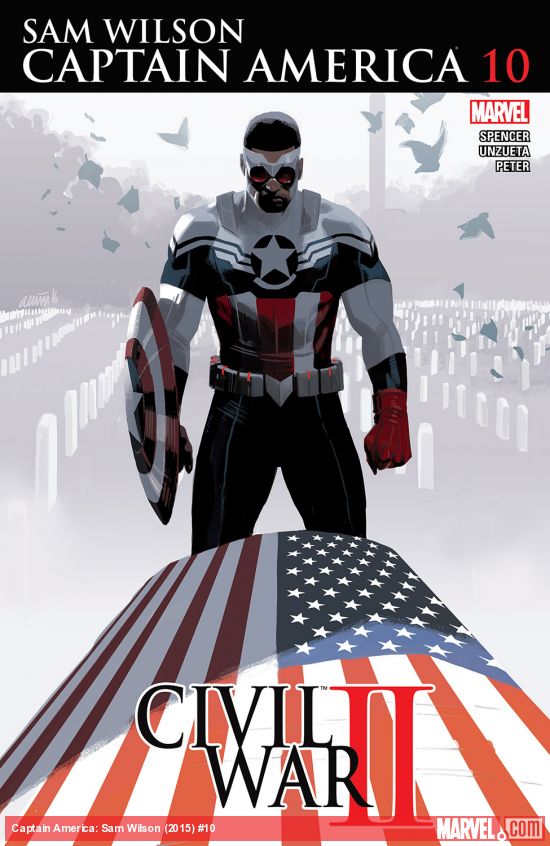 “Sam, you are a black man and you are Captain America.” – Misty Knight

Never have I ever read a comic book and stood up multiple times and gotten as hype as I would at a Wu-Tang concert. At least, not until now. (Keep in mind I was at work when I read this issue.)

Captain America: Sam Wilson has the hearts of readers in it’s clutches and just won’t let go. For obvious reasons, it’s amazing to see Sam Wilson taking up the shield after being Steve’s partner. But it’s even more special because of it’s commentary on black identity and using Sam’s experience as a vehicle to speak on events that specifically affect the black community. And issue #10 excels at just that.

We begin with the introduction of the Americops, who are a clear representation of police officers who choose to use discriminatory and harmful methods mostly on citizens of color. But, like many have treated the same problem in our own world, Sam just doesn’t have time to focus on it right now due to more pressing matters. But it’ll surely come later.

The most applause-worthy moment came when Sam and Misty walked through the church where Rhodey’s funeral was being held to only find an All-Star lineup of Marvel’s best black characters. I’m talking Storm, T’Challa, Luke Cage, Monica Rambeau, Doctor Voodoo and Nick Fury. Fam, all in one room??? Yes. And they’re there because they consider themselves to be a family and came together like families are supposed to do in times of crisis. They even gave Nick Fury, the almost literal “bald-headed stepchild,” a pass to be included in on the special occasion. 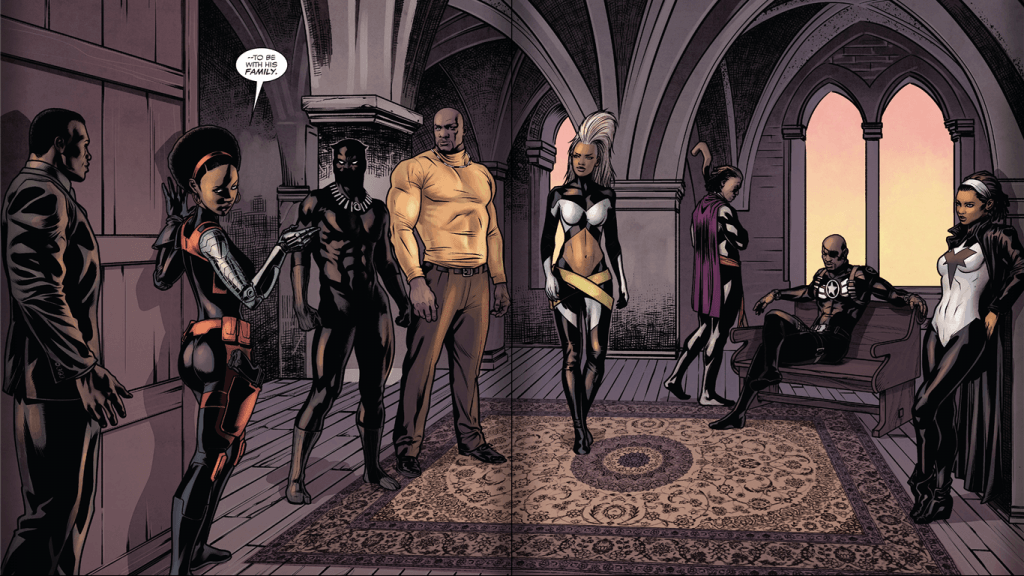 This meet-up gives me three ideas. 1) Is there a secret organization for black super-powered individuals? 2) Is this not one of the coolest things I’ve ever seen in comics and right in the BNP wheelhouse? 3) This might as well be an issue of Wakanda Barbershop!

Sam then steps up to the mantle, fully accepts his responsibilities as everyone’s new go-to black superhero and delivers a moving eulogy for Jim Rhodes in front of people that look up to the both of them the most on a church lawn in South Philadelphia.

While Jim Rhodes’ death seemed a bit weighted and unnecessary, this issue makes sure it wasn’t a waste. It, at the very least, gave Sam Wilson the push he needed to get over the wall and become great.

10 Black Super-powered Fists in the Air out of 10
[quote_simple]”I only have one Captain America, and he can fly.” – Keith Reid-Cleveland[/quote_simple]