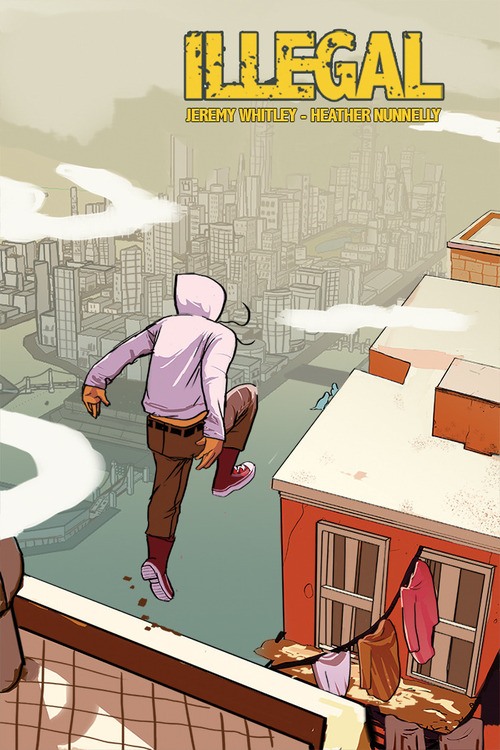 Here at Black Nerd Problems, most of us are fond of Jeremy Whitley, the creator and writer of several comics, one being the verily awesome Princeless. He stays a very busy man and if you  missed it, we were able to catch up with him and talk to him a little back about Princeless, the importance of positive representation of women in comics and so on.  I was recently made aware of his new project tilted, Illegal.

The story takes place in what looks like the not so distant future, here in America.  We  follow the foot steps of  Gianna Delrey, a young woman, originally from Mexico who happens to be an undocumented worker. She goes about being invisible because it seems being illegal is something akin to a crime.  So she lays low, does her best to do her work despite not being seen as an actual person and works for  living being paid less, considerably less because she undocumented. One thing that sticks out to me is that so often in sci-fi or post apocalyptic works, people of color are easily erased. Gone. Usually shown, if ever, in roles of deviants or criminals. Or slaves or the people who populate the slums. And mostly NEVER the person who the story revolves around. Mostly never the person of interest. I mean, come on, we can only have the white, heterosexual male character as center stage for so long.

From reading the preview, I’m struck with several questions–“What does it mean to be an American?”  Just how much does your skin color, where you were born and how nicely you fit into the confines of society play into your status of being a citizen of this fine country?  I think this comic comes at a especially important time because of the way Immigration Reform has been on the backburner for a while.

Another thing that stuck out to me: joining him as the artist for this project is Heather Nunnelly. While I was unfamiliar with her and her work, I am now glad that I am! I’m always looking out for female talent in the industry. You know, to add to the list of  the amazing women who work in this male dominated industry and produce excellence. She’s a talented artist and her concept art blows me away.  I’ll add that she has a neat web comic  by the name of VACANT and I love web comics, seriously. I’m always on the lookout for a new one to read.

Their new comic, Illegal is sure to keep us on the edge of our seats as the main character Gianna has to find a way to survive in the place she calls home. A place she’s called home for quite a while but claims her as a second class citizen. I’m way curious to be able to see this comic have a chance to come to life: there is currently a KickStarter  campaign to help make this a reality.  We wish Jeremy and Heather all the luck to get this funded and to be to bring something simply awesome into creation. You can check out their project yourself and see if a pledge from you is right for this unique comic.