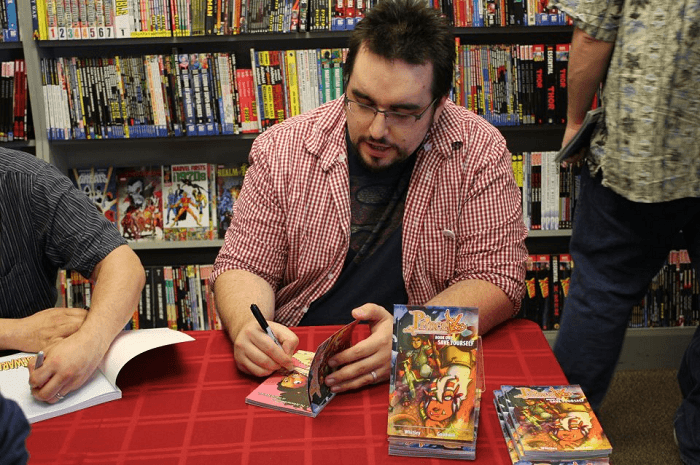 If there’s anything we love here at BNP, it’s good writing and representation in our comic books. As you can imagine, we’re big fans of Jeremy Whitley. The Eisner Award nominee has had his writing featured on many publications, but most of us here were introduced to his work through his own creation, Princeless, the story of an African-American Princess whose independence is on full display. Jeremy was gracious enough to sit down with us for an interview on the impact of Princeless and other projects he has in the works.

Black Nerd Problems: A year ago, Princeless was reissued by Action Comics making it more affordable and more readily available to a bigger audience, since it was out of print and only so many issues were printed in the initial run. How has the interaction been with this new crop of readers and fans? Do you have any particular stories of emails, tweets or meetings with fans that let you know this was the right thing to do with Princeless?

Jeremy: Absolutely. I’ve spoken to a lot of people that picked up our $1 first issue which we released when we came back. I wanted for people to be able to give it a shot or give their kids something to try without investing too heavily. As a father now myself, I know how disappointing it is to spend a lot of time or money on something your kid ends up not caring about. Being a comic aimed at a younger audience I know that’s a hill we have to climb.

As for interactions with fans, I’ve had a trend recently of women crying on me. It’s nice to know people are affected but also a little unnerving. I had a conversation with a lady recently that went something like:

“My daughter just loves your book so much. It’s her favorite comic. She read it over and over and then she took it to school so she could show her friends that there was a princess that looked like them. And it’s so important and I just…I just…I just…”

And she just starts bawling right there in the doorway to the panel room I was just leaving.

“I just wish I’d had books and characters like that when I was a girl. I think what you’re doing is really important.”

I didn’t want to shush her or anything but I had to give her a hug because she looked like she needed it and I didn’t know what else to do. She came out of the panel room and talked to me for another five or ten minutes before she finished crying and got back to smiling. It was a really touching moment and one of those things that lets you know you’re on the right path and you’re doing something right.

I’ve had similar things happen a few times now and I don’t think I’m going to get used to making people cry.

BNP: Your essay on women in comics is FANTASTIC. It totally resonates with me on several levels on the plight of women—not just the ones on the pages of the comic books we read. But the womenfolk who are harassed at cons, the ones who feel imitated at comicbook stores, and ultimately young women, little girls like your daughter who, you want to have books for them, books of female characters that empower them and them that they, too, can be anything—not just a plot device or eye candy or GOD FORBID, just a sad little princess waiting in a tower. Since you wrote that essay back in September of last year, do you feel that there has been a positive change in the system? Do you feel a bit more at ease?

Jeremy: You know, it depends on the day of the week. There’s days where some company releases some new trashy book or shows they don’t know how to create a female character or relate to women and I think how far we have to go.

But then there are days like my Saturday at Denver Comic Con where I got to moderate the Women in Comics panel with Fiona Staples, Joan Hilty, Janelle Asselin, Christy Marx, Emily Martin, Rhiannon Owens, and Lea Hernandez. A day where the room is packed with women of all sizes, shapes, colors, and ages and I get to stand at the podium and ask the question of “Who here wants to make comics?” and watch all of the hands that go up. It’s really amazing.

There are so many talented women in comics right now and I keep discovering more and more. [quote_right]”..this time last year I couldn’t have named that many monthly comics with female leads, nonetheless ones I would read. It’s getting better but there is still a lot to do. I’m hoping to have a hand in helping to do it.”[/quote_right]So many of them are making great books and webcomics and art that I just can’t read all of it. In fact I just met this young woman at Heroes Con this weekend named Ngozi Ukazu who has this amazing cartoon style and is making this great webcomic about a figure skater turned hockey player called “Check, Please!” I bought a copy and then sat down at my table and read it front to back.

I’m probably forgetting some but at this time last year I couldn’t have named that many monthly comics with female leads, nonetheless ones I would read. It’s getting better but there is still a lot to do. I’m hoping to have a hand in helping to do it.

BNP: Just looking upon the first cover of Princeless #1 filled me with an indescribable joy: positive and proper representation will do that. I read through the first issues of Priceless and told our editor-in-chief, that I would have loved something like Princeless when I was a little girl. Even ten years ago! Mind you I’m a woman in my twenties but reading through these issues brought out that shy, ever curious, little girl who was always reading and looking through comicbooks for someone who looked like me. Do you ever think about the lasting legacy of your work, particularly– Princeless? Other than it being something you created for your daughter, at this point in the game what else do you wish for Princeless to do?

Jeremy: Whew. I don’t like to get ahead of myself and think about legacy too much, but if this book has one – and I hope it will – I hope that means seeing more positive representation in comics and other media. Honestly, I know there are a lot of creators who resist commercialization and transmedia with every fiber of their body, but I couldn’t feel more strongly the opposite.

I want there to be Princeless toys, action figures, dolls, cartoons, t-shirts, lunchboxes, movies – whatever. I know first hand the effect that shows like Doc McStuffins has had on my daughter. I’d like girls – and especially girls of color – to be able to see themselves represented everywhere they go. I want every girl to be able to get that message that they don’t need to wait around to be told they can do what they want to do and that they don’t need anyone to save them. But yeah, that’s getting way ahead of myself.

BNP: And what of Snow? I confess to being a Tumblr fiend and saw some panels of the comic that you are working on with artist Jessi Sheron. It looks awesome by the way…What can you tell us about this new endeavor and the progress you and Jessi are making towards making Snow something we can one day see in comic book stores? Also where did the inspiration for Snow come from?

Jeremy: Snow is a story about a sixteen year old girl who wakes up to find her sister kidnapped by a terrifying Evil, her city turned into a fantasy battleground populated by all sorts of terrifying creatures, and all of the adults missing.

I want the story to be part urban fantasy and part survival horror. I’ve always loved movies like Labyrinth, but I felt like it never really captured how terrifying these mythological beasts would really be in real life. Something like Pan’s Labyrinth did an amazing job with that part, but took it so far from the modern setting. I want that terrifying feeling of the familiar combined with the wicked and terrifying.

It’s also going to be a story about two sisters who are really just trying to survive a life that’s been less than kind to them and the strength that they find in themselves and eachother.
Jessi is doing an amazing job of pulling out the really striking images and colors and making things unsettling. With a horror story that’s going to stay in the PG range, so much of the book depends on the images being genuinely scary. The monsters in the book should be really hard to forget.

BNP: You’ve come back recently from a Convention, Heroes Con, was it? How did you fare? Any exciting news?

Jeremy: Actually, I was just on a long run of three conventions back to back. I did Phoenix Comic Con, Denver Comic Con, and Heroes Con. All three were really amazing and I would highly recommend them to any creators that might be thinking about doing them.

I got some good leads on some new projects and got to talk with my My Little Pony co-conspirators about some of the plans I have there. I also got to sit down with Emily Martin and plan some of what’s coming in Princeless. We are both really excited for the new volumes and I am in the midst of writing volume 5, which I think it going to be an absolutely crazy amount of fun. Meanwhile I’m planning a half dozen other books I hope people will have a chance to see/support over the next six months or so.

I have a few more things I’m hoping to hear about soon, but nothing I can really talk about. But if people want to follow me on twitter @jrome58 or on Tumblr at princelesscomic.tumblr.com, I will be sure to update everything as I know what’s going on.