Yes, yes, muthafuckin yes, my people, we digital only up in Korra-verse these days. Shit is mad inconvenient when your recaps take mad stop and start action and you gotta work the Trinity from Matrix wizardry to get that shit on your TV now. Nick.com out here talkin about I hold you down for the summer and shit, but these Friday night animated ratings ain’t loyal.

It’s another beautiful day to be a Korra fan with functional internet and a big ass monitor because this is easily the best season of Legend of Korra yet, my benders. At least once an episode now, I be wanting to jump up in the middle of that bastard and be like:

We start where we left off: Asami the Fictional Bae cuffed up and Korra rockin the same apparel Anthony Hopkins won an Oscar in. They’re boarded on an airship headed for the Ba Sing Se as prisoners to the Earth Queen, even though Korra tries to warn them that ya boy Zaheer is trying to John Wilkes Booth her highness. While getting secured Asami works the feminine wiles on the guard to set up her escape, but then Korra gonna ask for some water like this dude is about to take her lunch order. Oh, what, you were just parched Korra? That’s like Woody Allen being in a creative slump and asking for an underage girl.

Meanwhile, the Bending Brothers are still locked up by the Angels of Death while traveling to Ba Sing Se as well. Yo, you ever try out some new app on your phone like voice activation or one of Google’s 18 photo apps that you never tried before, but after a week, you’re like “Gotdamn, I didn’t even know I wanted that shit and now I can’t live without it!”…that’s what it was like to get some Ming-Hua and Ghazan exposition this episode. I didn’t even know I wanted that shit, b and now I want more of it. Ming-Hua used to pass her time in prison making up fan fiction about her guards and shit? She’s like like Water-bend game Kamala Khan in this muthafucka. Of course, this is the perfect for Bolin to jump in on as he instantly begins shipping Ghazan and Ming-Hua. Remember that scenario where I wanted to see Ming-Hua in a spinoff where she runs her own hair salon? Well I think we just found our delivery guy!

Back on the Rigid Airship, Asami aka Fictional Bae Number One aka Natasha Ramanoff the Black Widow aka ’91 MC Lyte aka FuckwithmeyouknowIgotit knows piece of shit construction when she sees it.

She goes Solid Snake into the floor panels to bring down the airship.

In Ba Sing Se, the Apocalypse Kids deliver Mako and Bolin to the Earth Queen and strike a deal with her to let them take away Korra when she arrives. The Queen rather enslave those airbenders she lost instead of take heat for holding the Avatar captive, so she agrees, but all that is the least interesting part of this. 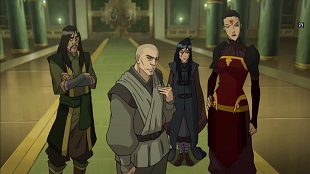 She is Mutumbo-ing over these cats, yo. If Michelle Obama borrows a dress from her, she gotta hit the White House tailor and tell them to TAKE THAT SHIT IN, B! Seriously, if P’Li can handle the rock half as well as she can combustion bend, she could probably get you about 18 points and 8 boards every night. You could get to the Easter Conference Finals with that kind of production. I’m sayin, your girl is long as hell. And props to Zaheer. On top of being a complete badass in everything he does, he’s also not a misogynist asshole. Lot of dudes can’t handle a taller woman.

Back on the airship, the plan is put in motion and Evelyn Salt knocks out the guard.

She frees Korra and they go straight to the cockpit and we are instantly reminded that Avatar Korra got no fucking chill whatsoever. Asami should’ve just ran up in there and put these cats down BEFORE freeing Korra. Korra could’ve put these cats through a window or something and not damaged the controls (cuz Lord knows that would not have been the most violent thing to happen in this episode). Instead, we out here playing Sahara with the airship up in the sand trap like Tiger Woods ever since his ex took a 9 iron to the Buick truck. They out here in a waterbender’s nightmare. The captain talkin that shit, like these cats are still captives. Bruh…

Where this cat think he is, in a Virtua Fighter 5 tournament? Button mashing ain’t gonna make you gain 4 new elements, kid. He got a better chance of walking into that desert and finding the Scorpion King than he does of lasting 30 seconds in a fight with Korra.

In the prison, Mako and Bolin on that Bending is the New Black life as they been in captivity for a minute now. Mako is FED UP and is trying to convince Bolin that he can metal bend to get them out. To Be Honest, Mako been giving those Any Given Sunday speeches to Bolin all season.

But Bolin is still closer to shitting himself than actually metal bending. Cat let Toph Beifong down.

After Korra digs out the airship and Asami, “Tony Starks” the tail fin of it, shit seem operational…

…until the gotdamn Sarlacc from Return of the Jedi swallows that bastard whole. I had no idea these cats had crashed on Tatooine. The Fictional Bae comes up with the idea of building a sand sailor from the scrap because the worm is still out there and it don’t care how many elements you bending.

In Ba Sing Se, Zaheer breaks off feeding P’Li grapes on the couch and shit when he sees a messenger moving too quick through the hallway. He follows them into the throne room and platforms his ass into a place to eavesdrop like he is fucking Qbert or somethin.

After learning that Korra has probably escaped, the AOD roll up on the queen like.

The fight ensues with the AOD and the Dai Li and that shit didn’t even last 2 minutes fam. AOD lookin like those old American Gladiators episodes during “Teachers Week” or some shit. It’s not even a contest anymore. Which brings us to the most talked about part of this episode. The ones where Nickelodeon be going for that hard 7 in the TY-7 demographic, b. In short, Zaheer don’t believe in Queens.

Remember a while back in my review of Old Wounds from earlier in the season when I said this:

“Speaking of which, what the fuck is the advanced art in Airbending anyway? Can Tenzin create Tornados or some shit? Pull the air out a cat’s lungs? I need answers for this shit.” Zaheer at the Bar. Ordering that Asthma straight up. No inhaler.


[divider type=”space_thin”]
He giving the revolution speech while Ghazan out there equalizing the economy and bringing down Wall Rose like the Colossal Titan. Mako and Bolin still locked up cuz Bolin pulled a hernia trying to metal bend before.

Zaheer appears and just like everyone else at his mercy, makes a deal to let them go if they agree to take a message to Korra.

Back on Tatooine, Asami Stark finishes the sand sailer right before the big ass worm comes back for seconds. Korra out there pushin that air like weight through the desert. The worm tries to swallow them one time, but she hit him with the hot shit and he backed off. I’m sayin, if Jonah had fire bending when the whale swallowed him, the Bible would’ve turned out MAD different. They make it back to Ba Sing Se and know that something is up because somebody left their dragon parked in the overnight lot. The whole crew is there, Tarrlock, Lin Beifong and Lord Zuko (still Da Gawd). Somebody needs to tweet Tenzin and tell him this shit is going down.