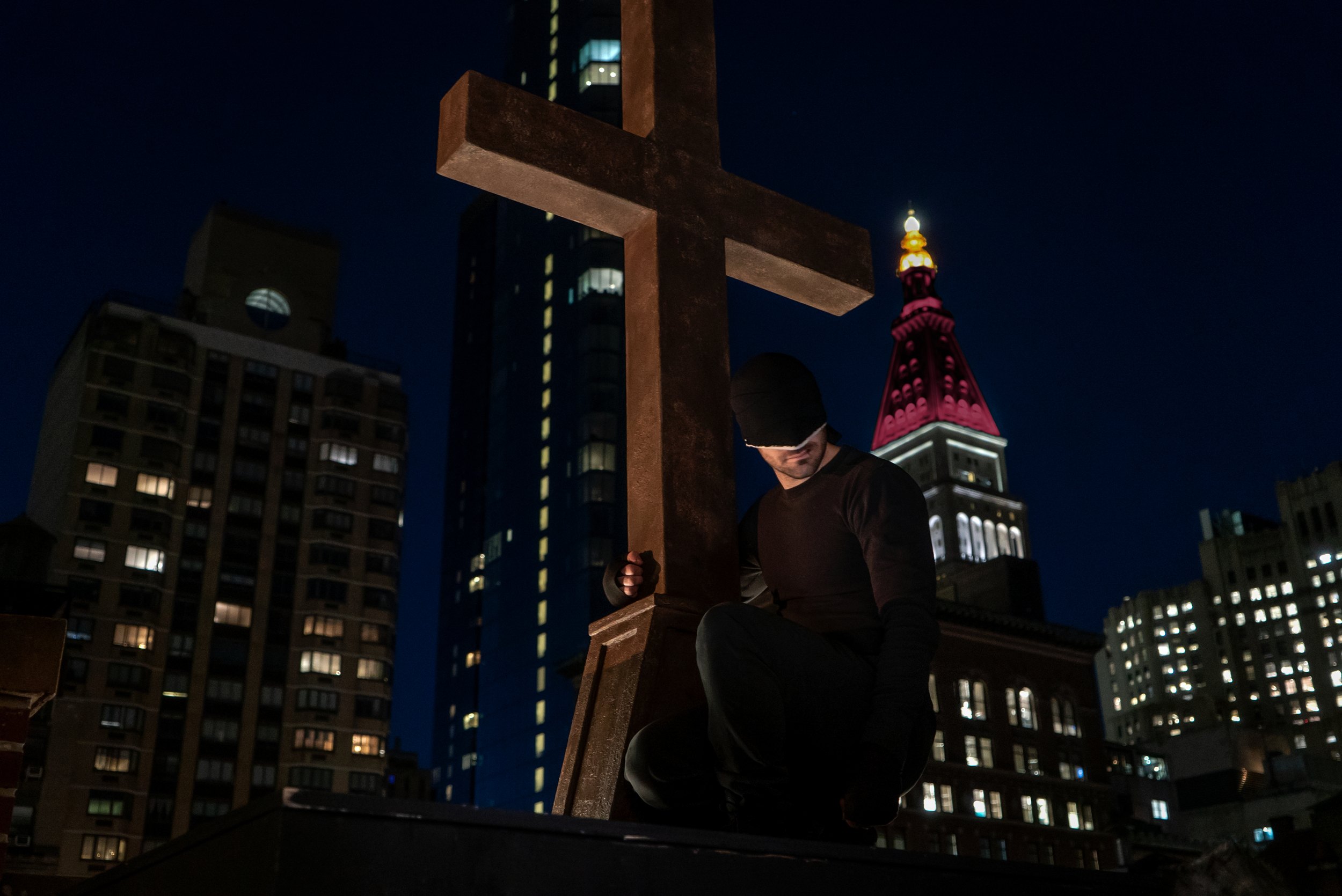 “You know, you’re one bad day away from being me.” — Frank Castle, Daredevil Season 2.

Daredevil Season 3 is out tomorrow friends — welcome to what happens after Matt Murdock’s One Bad Day.

Waking Up in The Orphanage

Our friend Matt (still played with earnest, introspective anger by Charlie Cox), as you’ll recall from Season 2, has had a building dropped on him, which killed all kinds of people, including his One True Love, Elektra (maybe? She was kinda undead, wasn’t she? Who can say? ) Everything that’s happened has left Matt questioning his faith and his calling.

If Murdock brooding, sighing, and looking out over a dark NYC skyline is your jam, the first two episodes are for you. He does plenty of brooding. He gets beaten, re-beaten. They beat him in flashbacks and flash-forwards, beat him in dark alleys and on bright wide open sidewalks. He’s just beat. If you love watching your fave hit the ground and just keep getting back up, you will love it.

If you’re like me, and you watch Daredevil for the action more so than the soul-searching, then you’ve been warned — this season has a slower start, but really gets moving around episode 3. After that, all the pieces come into focus, manipulated by the man behind everything: Wilson Fisk.

Fisk is sitting in prison on Federal RICO charges, but we know from Season 2 that being in prison doesn’t mean he’s out of the game. Fisk, (whew, the amazing Vincent D’Onofrio continues to earn his place as one of the best going right now) makes every prison his own personal castle. His ability to turn the tables on any conversation is terrifying. Bringing him back as the villain of the season is a perfect play.

Season 3 of Daredevil gives us the Nun, Sister Maggie. She runs the orphanage where Matt grew up, and it is to her that he goes running when he’s out of options. She’s part Stick and part Claire Temple. She takes none of Murdock’s shit and hands out healthy heaping handfuls of real talk(™). She also patches him up, cleans him off, and puts him on his feet again. Her scenes are heartfelt and genuine, with just enough of that stereotypically famous Irish Catholic sensibility to make me feel like I’m eavesdropping.

What about Matt’s sidekicks, Foggy and Karen? He’s broken up with them. In a fit of Stick-like stubbornness, he determines that loving people only gets them hurt, so he leaves his besties behind. The irony of the fact that the only way he made it out of Midland Circle was with a little help from his friends, is apparently lost on him. So what are Franklin and spunky Karen up to?

Foggy (reliable Elden Henson, looking as earnest as ever) is lawyering away, while still visiting the family at Nelson’s Meats for dinner every now and again. He has second thoughts about the new high-powered life. Without Matt, and the dream of avocados at law, he’s kind of dried up. He lets Karen’s optimism get the better of him, continuing to pay the rent on Matt’s flat “just in case”.

Karen (taken on a great growth arc by Deborah Ann Woll) meanwhile is still working the beat at the New York Bulletin, taking over from the esteemed Ben Urich. She writes gritty, important stories, along with the occasional bit about local socialites. In this season we finally get more glimpses of what happened to her up in Vermont. She is all anguish and pain about it, but she goes through it to convince a socialite to tell the truth. So really, Karen’s not above a few weaponized tears to get what she wants.

The City Needs a New Villain

OH YEAH Wilson Fisk, the Kingpin, is BACK!

Fisk also effectively weaponizes his emotions to convince the FBI of all kinds of things. First, he convinces them that he loves prison. Then that he is willing to cooperate and turn stool pigeon. It is impossible to know what is true and what is false when dealing with the Kingpin, but there can be no doubt he gets what he wants. What does he want? He wants his wife, Vanessa, safe and sound. That’s for sure. As to the rest of his plan? Well, he continues to drip the condescending menace that made the first season amazing. Only this time, he’s using it against the FBI agents tasked with interrogating him and keeping him safe.

Two FBI agents have the privilege of being played by Fisk this time around: Rahul ‘Ray’ Nadeem (actor Jay Ali) and Benjamin ‘Dex’ Poindexter (Wilson Bethel, bringing perfect soap opera melodrama to the role). Nadeem is broke AF and vulnerable to Fisk’s money. Poindexter, I’m not going to spoil it, but fans of the Daredevil comic will know him right off. His vulnerability to Fisk’s manipulations is terrifyingly parallel to Murdock’s own weaknesses.


In an interesting approach, Fisk, Nadeem, and Poindexter have a story separate from Murdock, Foggy, and Karen for the first few episodes. You know they will collide, but the suspense of how these two poles are connected provides a lot of the energy of the first half of the season.

Daredevil Has His Hands Back

All the things you liked about season 1 are here: the innovative cinematography, the creative manipulation of flashbacks, the brutal close hand-to-hand beatdowns. Some of these shots, as stills, are worthy of art classes all by themselves. They are just perfectly framed. No flashback is given flat, they are all done in unique ways that tell deep stories within the main story. Black and white juxtaposes with color — red, so much red — in ways that reveal new, deeper connections in the plot.

And the fight scenes…damn. I say GOTDAMN. Fast, frantic, bloody. Yes, there is a new “hallway scene”, in one long magnificent take. This time Murdock isn’t going in, he’s getting out of a fight he didn’t choose, but the hallmarks and influences of great film-making remain. His fatigue, his determination, his instincts are all on display. Whatever issues I may have with all the brooding, Cox brings his A-game to every fight, and that makes me happy.

I wouldn’t say this show is “cinematic” in the usual sense — it isn’t one long experience tied together with one vision. It is much more analogous to a comic book experience. Every episode/issue brings a new perspective on the characters, while remaining true to the core experience. Each reflects its director the same way that a comic book issue reflects the writer/artistic team.

We’ve come thru the wilderness, friends. We lived through the disappointing Jessica Jones season 2. We dragged through the indifferent Luke Cage season 2. There was all that Iron Fist. There was the a’ight Defenders and the uneven Daredevil season 2. Netflix had to get the flagship series on solid ground if we were gonna keep watching. They needed Murdock to be himself — to get up and keep on fighting. Daredevil Season 3 does exactly that. Friday, October 19, the whole season drops, perfect for weekend binging. Rush through episodes 1 and 2, because when episode 3 starts up, you’ll be glued to your device all the way through episode 13.