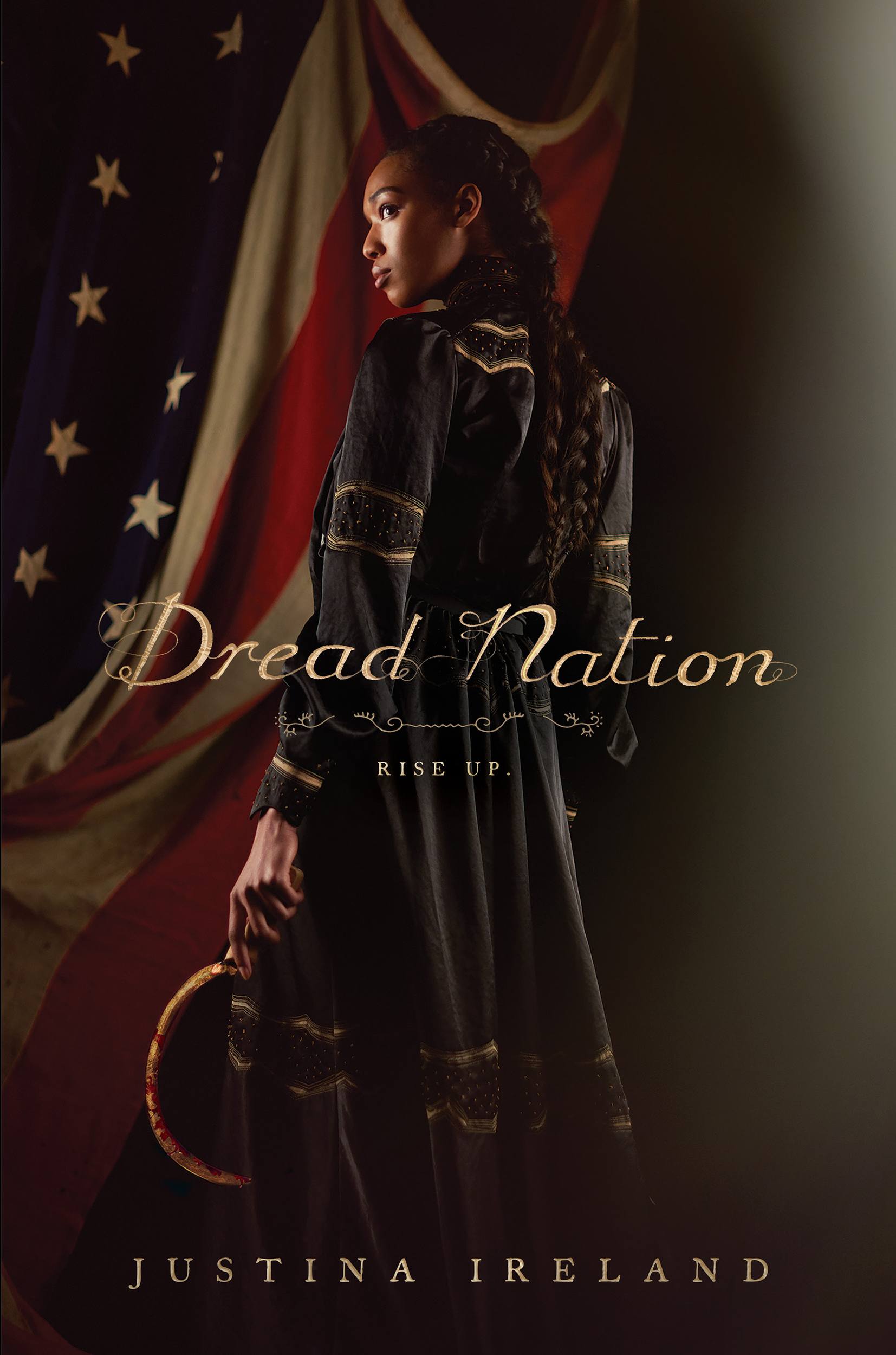 I first began following Justina Ireland’s writings about a year ago, after reading the first issue Fiyah Lit Mag, for which she is an editor. As fierce and touching and slightly funny as the stories are in Fiyah, Justina is the same. She’s a stand-up advocate for Young Adult fiction and how to improve the inclusion of marginalized writers in “the mainstream.” So when she announced her latest book, Dread Nation, I hit pre-order right quick. I was not disappointed. This book is as stand-up, fierce, and wryly funny as anything I’ve read in a while. I was entertained every step of the way.

Dread Nation is the two-part story of Jane McKeene, a student at Miss Preston’s School of Combat for Negro Girls. There are lots of combat schools for negroes, but Miss Preston’s is one of the best. Why combat schools? Well, you see…the undead. In Ireland’s alternative history, during the battle of Gettysburg, all those dead bodies didn’t stay dead. They rose up as deathless monsters, fighting both the Union and Confederate armies. This stopped the War of Northern Aggression in its tracks. Check the promo video:

In the aftermath of the War, the United States has remained united. The Southern states have been overrun and the Northern states have shrunk to isolated walled cities. Slavery has been officially abolished, but in its place, there is now mandatory schooling for Negroes and Indians, where they are taught how to kill the undead. These new soldiers are then sent out to defend good white people. It doesn’t take a genius to see that this is really slavery under a different name.

Jane McKeene is training to be an Attendant, that is a Black servant to a white woman, part bodyguard, part chaperone, part personal slave. It is a good calling. But all Jane really wants to do is get back to her momma in Kentucky. Jane’s relationship with her mother is one of the backbones of the book, illustrated in the opening “letters” of each chapter, which establish Jane’s background and are often in stark, and ironic, contrast to the happenings of the chapter. For example, here’s the opener from Chapter 3:

“I know you probably worry about the number of undead out here in the East, but Baltimore County is the safest in all the country. They say so in the newspaper, and you know the paper would never lie.” — Ch 3

The irony of the intros is a fruitful literary technique used to perfect effect.

I hesitate to call Jane “spunky” because of how typical that sounds. She’s not “spunky,” but she does have spunk — energy, spark, dare, drive. Her personality is very much like Tom Sawyer of Mark Twain’s work. Jane goes so far as to carry a copy of Tom Sawyer in her pocket for part of the book. Jane is imperfect but very much a delightful heroine. She is constantly fighting on multiple fronts: against the expectations of white people around her, against her own impulses, and against the undead.

Joining Jane in school is her enemy turned friend, Katherine (never Kate), another girl at Miss Preston’s who skin and hair allow her to pass for white, if she wanted to. Also there’s Red Jack, a local scoundrel and former boyfriend of Jane’s, who along with Jane’s curiosity, pull the three of them deep into a drama involving all of Baltimore. A drama that then draws them out of the city and beyond to much more dangerous locations.

Dread Nation is suitable for most readers, definitely down into the mid-teen age ranges, yet the themes around slavery, freedom, and self-determination work well for adults too. I would love to see Dread Nation taught in schools along with Tom Sawyer or Huck Finn, juxtaposing who the two stories center and how they upend the social hierarchy in different ways

One of the strongest threads of the book is about how these 3 Black young adults use the perceptions of the white people around them to their advantage. They, and the other Black characters in the book, demonstrate both a deadly practicality in the face of white savagery, and a cunning, proactive ability to manipulate white prejudice to survive. We so often get images of Blacks as victims, waiting to be saved — there are no victims in this book. Only people playing the victim while others fight to get by.

“I never cared much about being an Attendant. All I ever wanted was to be free.” — Ch 17

In some ways this is a story about passing. About lying for the right reasons and learning what the right reasons are. About using your gifts to survive and help those you love do so too. Jane has lots of gifts on display; she’s clever, strong, willful, honest, and she can kill the undead with a pair of scythes in a very unladylike way. She’s afraid, but she doesn’t let fear stop her; she doubts, but she relies on her friends to get her through. And at the end, when she finally reveals all of her secrets to the reader, I fell completely in love with Jane. She’s a heroine on par with any other, and I’m excited to see where the story takes her next.

You can buy Dread Nation now where ever you get your books. Also, follow Justina Ireland for any more information, supplemental materials, YA conversations, and announcements for her future work: http://justinaireland.com/home. You’ll thank me.