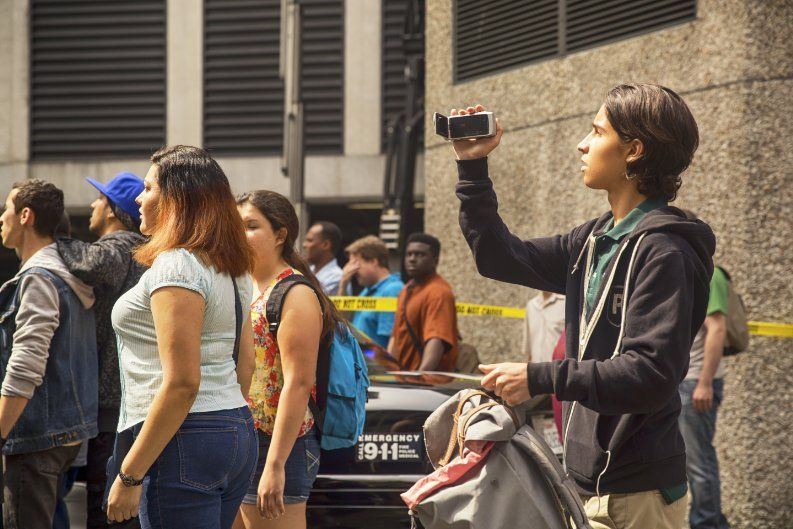 [dropcap1]I[/dropcap1] haven’t been able to sleep right since I saw episode 2 of Fear of the Walking Dead. It wasn’t the ever-present threat of society’s devolution. Or the flesh-eating zombies with their surprisingly hard (not-yet-decayed) skulls to protect their brains. Or the horrible choice Madison made to not take the food.

It was the scene in which brown people yell about police shooting a homeless man 20 times for doing nothing that wouldn’t let go of me.

Obviously Fear the Walking Dead is following in the kill-all-the-Black-men footsteps of The Walking Dead, but this felt different. This is beyond negligence or racial obliviousness or even lazy writing. This feels pointedly and specifically like “gaslighting” or being told that something you can clearly see is happening is not happening.

Back to FTWD — Chris is on a bus when someone says the police shot a homeless guy like 20 times. Now, cue the crime scene and add all the details we’ve come to expect at a crime scene: yellow police tape, a kid with a camera (why not just his phone?), a loud, angry Black man yelling about his rights, and a mob of unruly and mostly brown protesters (I see you, bald white guy who I like to think of as Token the Mascot for Plausible Deniability).

Hmmm. This feels so familiar.
Yes, you can – and someone already did – argue that “the audience knows from the get-go that these protesters, for all their righteous, social justice-minded rhetoric, are completely wrong… [and] end up looking silly at best — and reactionary and oblivious at worst…” and isn’t that a luxuriously ahistorical way to view this scene? Isn’t that the specific danger that erases the murder of Black people at the hands of the police? This scene gives people permission to dismiss the very real and justified fears of Black people/PoCs when it comes to police brutality.

But don’t believe me, let’s go to the video tape (of police shooting a homeless man to death in 2012) for some context. So not only is this scene essentially a reenactment of Milton Hall’s death (which was investigated by the DOJ and which – surprise! – yielded no charges), but it is presented as a scene in which the history is rewritten: the police are totally and completely justified in their use of force; it is the protesters who are misguided and misinformed or, as the writer quoted above puts it, “completely wrong.”

I mean, who can blame the officers for taking down these creatures who possess inhuman strength and just keep coming?

To frame it so that those protesting police brutality in late 2015 – with the growing and bloody laundry list of Black bodies – are wrong or misguided or don’t understand or don’t have all the facts or [insert bullshit argument that Black people have been forced to deal with on Facebook every time a Black body has floated to the top of a precinct] is weak on a good day. On every other day, it’s… well like every other day. ..