Everyone has their favorite Final Fantasy, more than that, everyone has an entry in the series that they consider to be the best. Some say it’s VI, others IX’s but one thing that everyone can agree on, and it’s a fact that’s undeniable, is that Final Fantasy VII has had the biggest impact of all the games. Whether it’s because it’s the first 3D Final Fantasy game or most people’s first game in the series, Final Fantasy VII is infamous. The music, story, and characters are so iconic that it’s forever burnt into our brains.

That’s why when Square Enix first teased the possibility of the classic game being remade with back in 2005, the whole world collectively lost its shit. The prospect of seeing the game we loved recreated with current-generation graphics and technology was too enticing to pass up. It wasn’t until more than ten years and a whole console generation later that a remake of the game was officially announced, and it all became a reality.

Over the course of the next couple of years, more and more details began to emerge about how the remake would take shape, with director Tetsuya Nomura promising a change from the game’s original’s turn-based battle system to a more accessible action-RPG one. Even bigger was the reveal that the remake would be separated into parts, with this only being the first one. All this drew some cause for concern amongst fans, and for good reason. The old adage of “if it ain’t broke, don’t fix it” comes to mind. Everything from the Final Fantasy VII Remake screams of one huge risk. The only question – does it pay off? Yes, in a very big way.

Eco-terrorists, corporate greed, and a fight to save the planet. It’s funny how timely the plot of the original Final Fantasy VII still is 23 years later. If you’ve never played the original, the core of Final Fantasy VII’s plot revolves around Cloud Strife, a former Soldier and company man to the Shinra corporation. At the request of an old friend, he teams up with eco-terrorist group Avalanche as a mercenary for hire against Shinra. From there, you begin to learn more about the city of Midgar, it’s people, and how Shinra is draining the planet of its energy at an alarming rate. 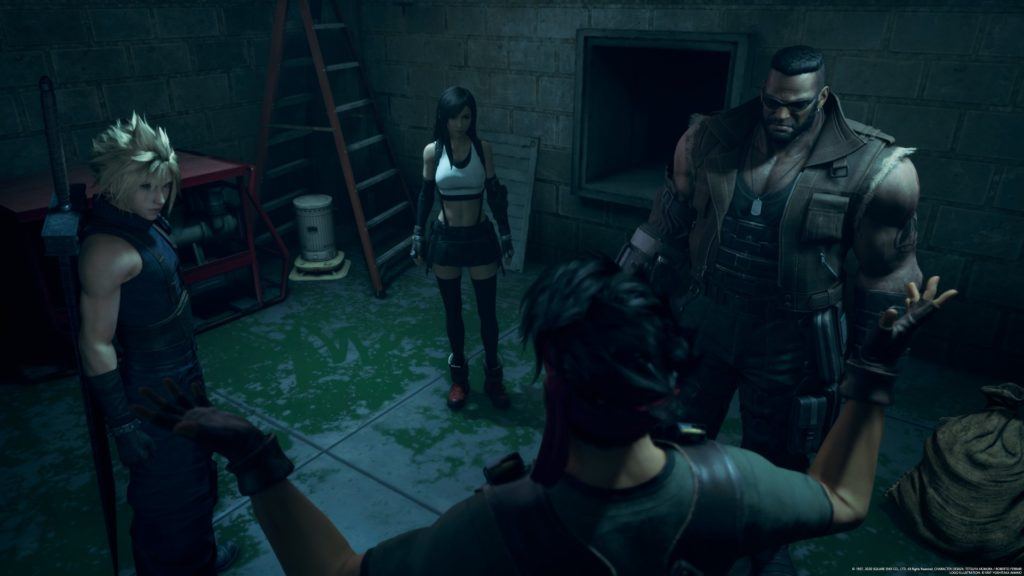 For longtime fans, you’ll be happy to know that the remake faithfully recreates the plot of the original, as well as it’s iconic moments. These scenes are just as you remember and so much better. For newcomers, you’ll find yourself entrenched in the city of Midgar and its struggle between its corporate overlords and the lower-class people. It’s a fun journey, complete with all the best aspects you’d expect from a fantasy epic. From guys with giant swords to magic and epic fights against gods, the spectacle and action are dialed up to 11. Fight scenes take on gravity-defying heights and the action choreography can give the Fast and the Furious franchise a run for its money. It’s all in good fun though and fits within the tone of its world. 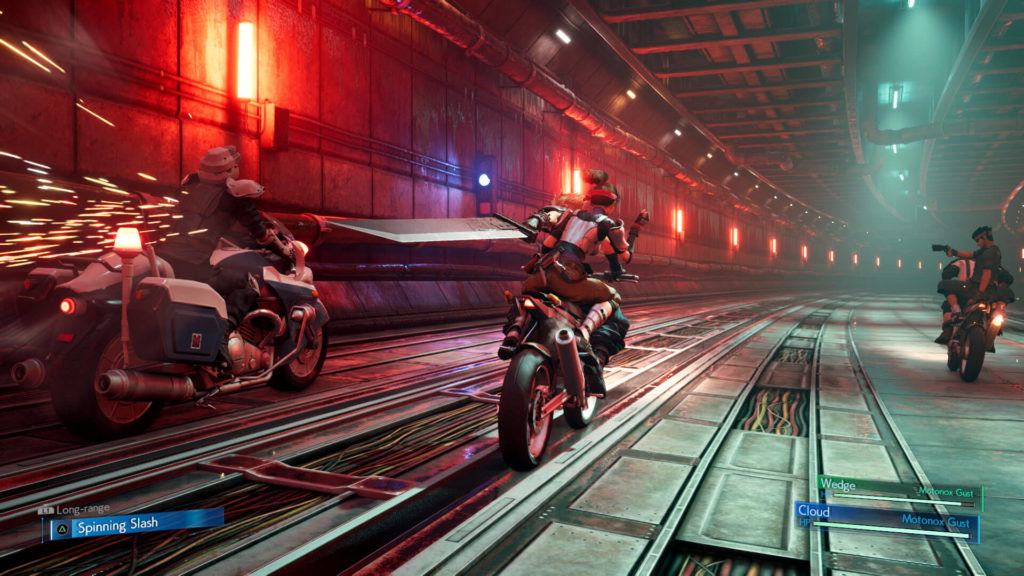 Even better, the story expands on those moments. All of the Final Fantasy VII Remake’s plot takes place in Midgar, which accounts for a third to almost half of the original game’s story. It’s clear that the developers wanted to breathe life into Midgar in a way that makes it feel alive more than it ever did before. It’s all done in a way that it’s easy to see new players falling in love with this game the same way that older fans have. And for the old fans, some of the new elements added to the plot will be welcome additions while the other may prove controversial. There are some surprises for those who think they know what’s coming. 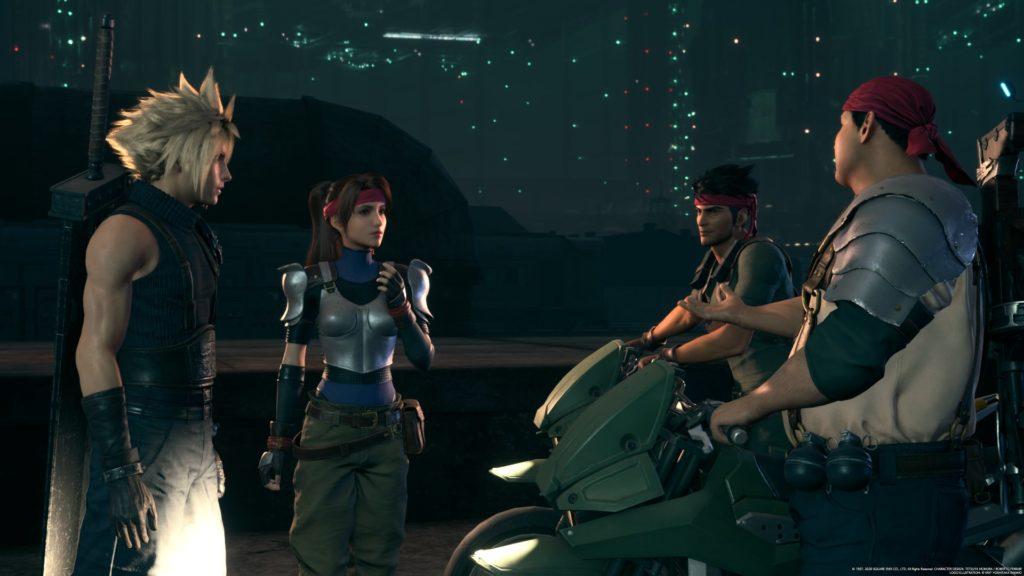 However, all of that would be pointless if they couldn’t do justice to the game’s unique cast of characters. Final Fantasy VII’s main players all remain as endearing as ever, personalities intact. Cloud’s a sarcastic smart ass, Tifa is the caring one with a heart of gold, Aerith is a bit of a troll, and Barrett is a passionate one. Even previously minor characters are given more screen time, developing them and adding some heart to the plot. At first, I was apprehensive to see these characters. I’m glad that my worries are unfounded. The voice cast portrays these characters how we remember them so well. Even though the script can sometimes come off as campy and stiff at points, the actors manage to pull it off, giving us an emotional connection to them and the story.

There is a clear jump in the technology from the original Final Fantasy VII to the remake. We’ve come a long way from the first PlayStation to the PlayStation 4, and it shows. This game is beautiful, and Midgar is a new vision of its former self. Once again, there’s a clear focus by the developers to make Midgar feel as alive as possible. In order to do that, they had to expand the formerly isometric environment of the previous game and fully realize them into a 3D space, all while retaining its steampunk/neo-noir architecture. It’s no easy task but the team at Square Enix pulls it off…for the most part. 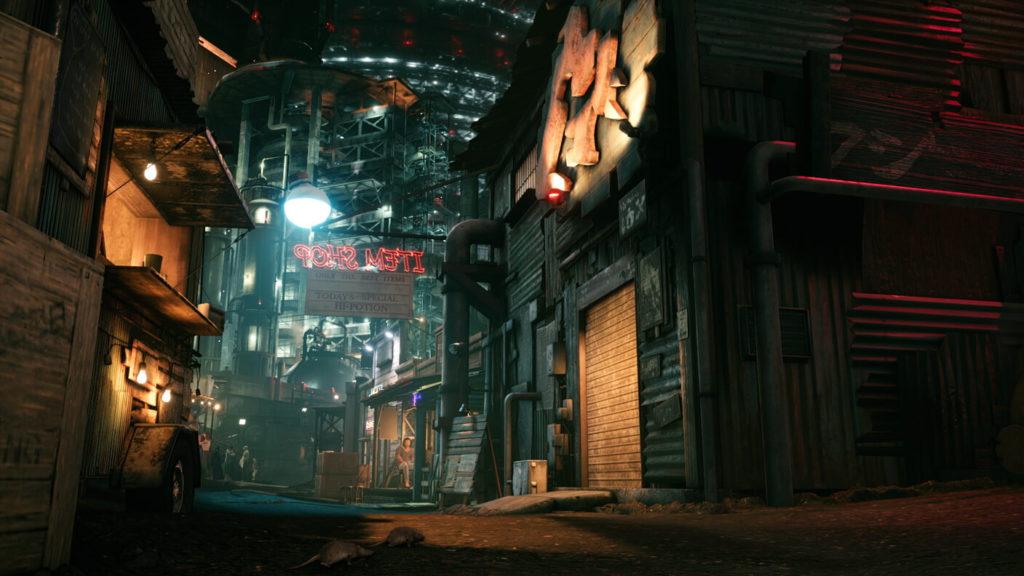 Minor technical issues do hold back these well-designed environments. I often found myself noticing how the main cast of the game and other major story characters looked amazing. However, textures on buildings and walls or details on NPC’s would take more than a few minutes to come into focus. I saw more than just a few muddy gray or brown backgrounds and pop-ins during my playthrough. Nothing major but enough to distract from how beautiful the game is. And the game is beautiful, pushing the boundaries of what the PS4 is capable of, making for visuals on par with the best CGI films. 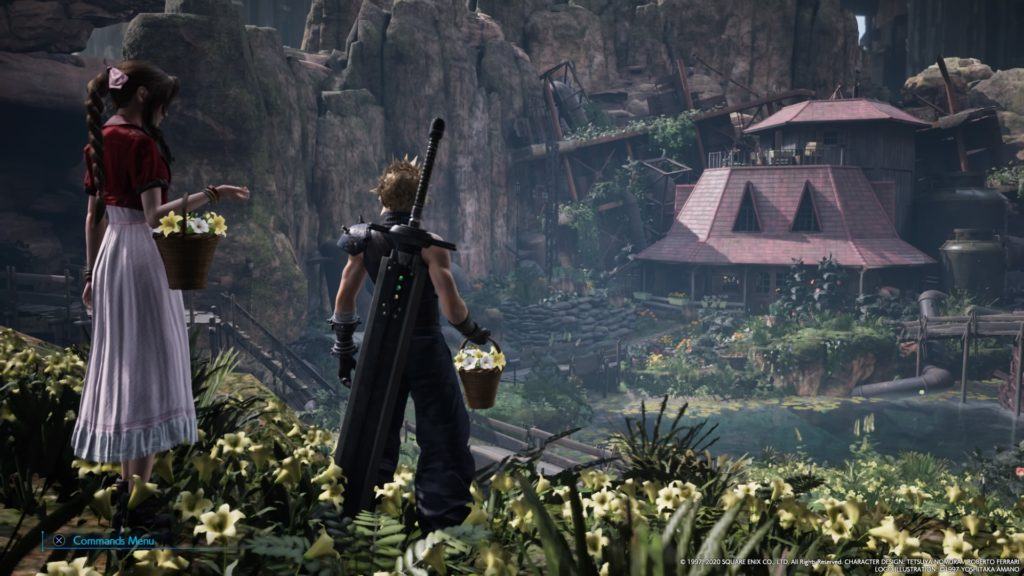 One of the more memorable aspects of Final Fantasy VII is the score. Square Enix took the effort of creating updated versions of the songs, which add a bit of an orchestral flair to them. The new versions of these classic songs still have the same impact as the original did in 1997. I was worried that it would lose its sound in the update, but the score is just as unforgettable as ever. Plus, there are plenty of new songs added to the game, which are a welcome addition. Final Fantasy VII has some of the best music in the series, and Square’s update does it justice.

More than the story, more than the characters, a Final Fantasy game can live or die by its gameplay. The original turn-based battle system holds a special place in my heart. So, the announcement that it would be replaced with something was more akin to Kingdom Hearts or Final Fantasy XV left me with pause. I worried that the remake would be just as mindless and lack strategy. The good thing is that those fears are alleviated once you get your hands on the battle system. 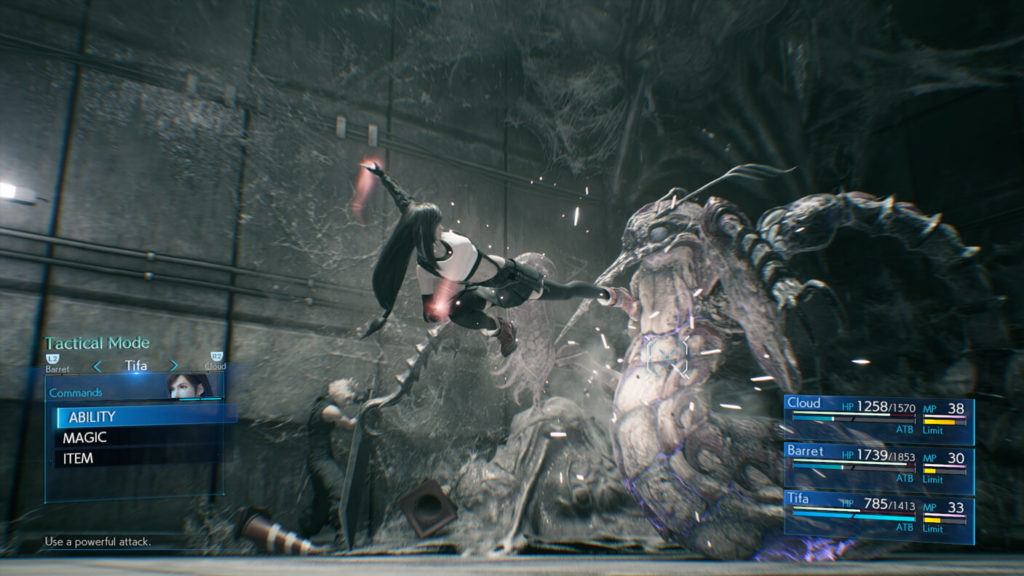 Before a battle, you can customize the weapons, equipment, and items for each party member. Each weapon comes with its own set of stats that can be upgraded, and a special ability that can be learned and passed onto the next weapon. The materia system makes a return, allowing players to tweak and set extra abilities, magic attacks, and summons. Upgrading weapons seem like an afterthought because I found myself not seeing the effects too much during battle. 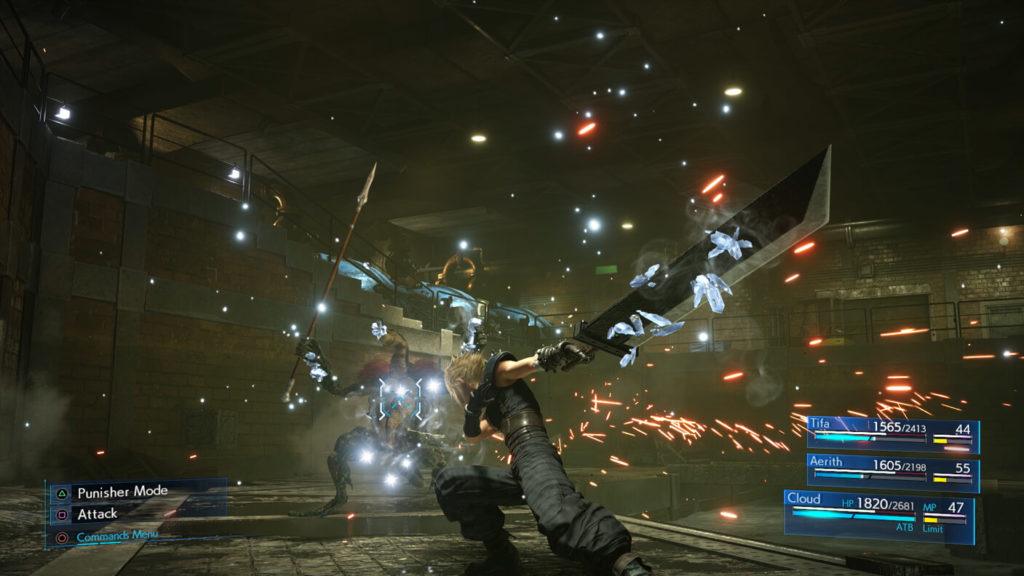 Players can switch between all three-party members freely, move them around the battlefield, use basic and secondary attacks at any time, as well as block and dodge. What makes the combat stand out from your basic hack and slash is the Active Time Battle (ATB) system. As you fight, defend, and take damage, your ATB gauge grows. For each bar that is filled, players can take several special actions. Those actions can be linked to shortcuts or accessed by Pressing X to open up the menu, slowing down the combat like bullet time.

I barely found myself using shortcuts because using the menu feels a lot more satisfying and like playing the classic Final Fantasy VII. Slowing down the action also allows you to think, strategize, and plan whether you are going to spend ATB bars on a character’s special abilities, spells, or items. Once you get in the flow of things, even with the pauses in combat, the action is nonstop. While everything in battle is in real-time, the developers have made battle feel so cinematic, making each battle exciting to play. It’s the perfect middle ground for new and old players. There is so much fun to be had fighting against the enemies you take on. 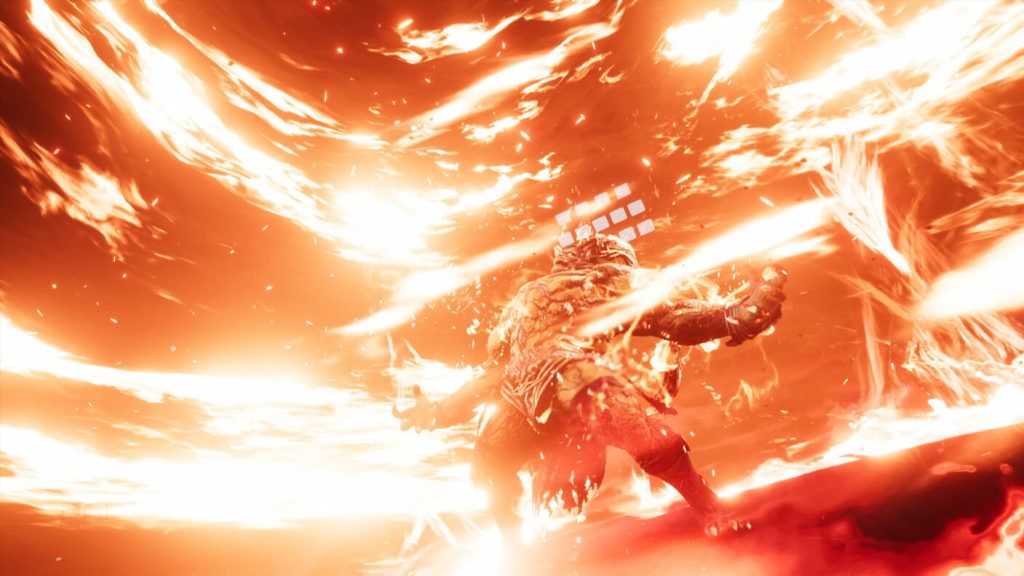 Speaking of enemies, there is a large variety of them to encounter. Players will find themselves needing to pause the action a lot in order to analyze the enemies and exploit their weaknesses. It’s a lot of fun, but it’s not perfect. Smaller battles can grow a lot less thrilling and rewarding to play overtime. Sometimes you run into an area, press the attack a few times, and it’s over before it even starts. Another gripe I had was that the enemy AI tends to focus its attack on the party member you’re controlling, making you switch between members more often than I would have liked. Thankfully, there are plenty of mini-bosses and great boss battles that more than makeup for it, letting you fully utilize every aspect of combat. 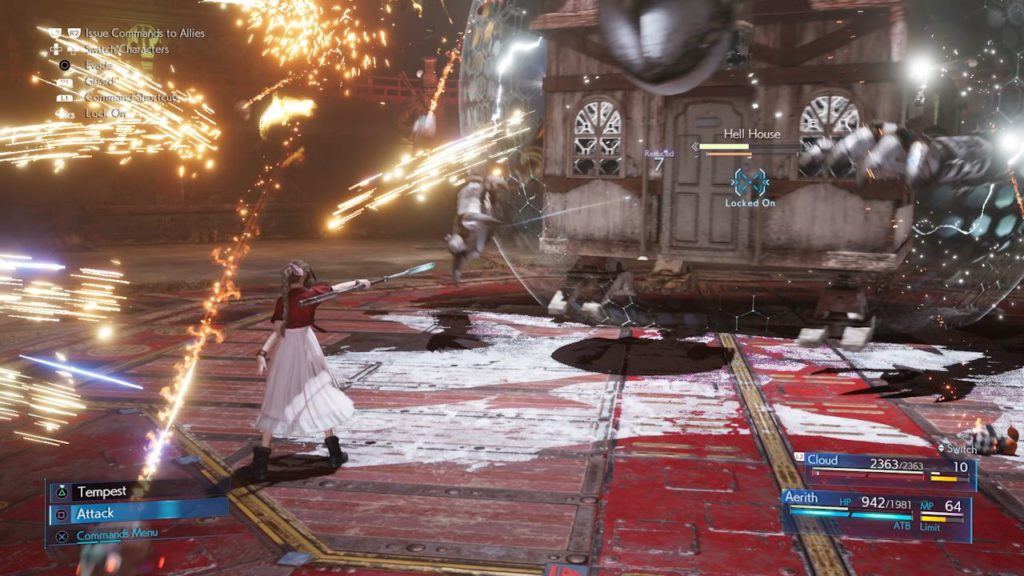 Outside of combat, the game is mostly linear by all counts. It is designed to keep you in one specific area for as long as you can. The developers have added several side missions to each of the main areas, which act as a way of stretching the playtime and story. Environments like the Sector 6 and 7 slums and the wall market feel bigger and more populated than it did before. The architecture and NPC’s of those areas also do wonders for environmental storytelling. Even I, as someone who played the original PS1 game, felt like I was learning about Midgar through a whole new lens. All of it encourages you to explore as much as you can and take your time with the game.

Remakes and Remasters are not the same. There was a point where those two words got so confused, and I kinda understood why. Giving games a new coat of paint meant making it HD or updating the character models. However, the last year or two has seen developers fully recreating games with current-generation game design mechanics and flare. The Final Fantasy VII Remake is an example of that. When it comes down to it, the game is a reimagining of the classic game that feels familiar yet brand new at the same time. Old school fans will have to decide for themselves if they are okay with the major story changes but there is no arguing how visually stunning the graphics are and how captivating the gameplay can be. For sure, the remake will have made plenty of new fans and anyone who plays will have a blast. 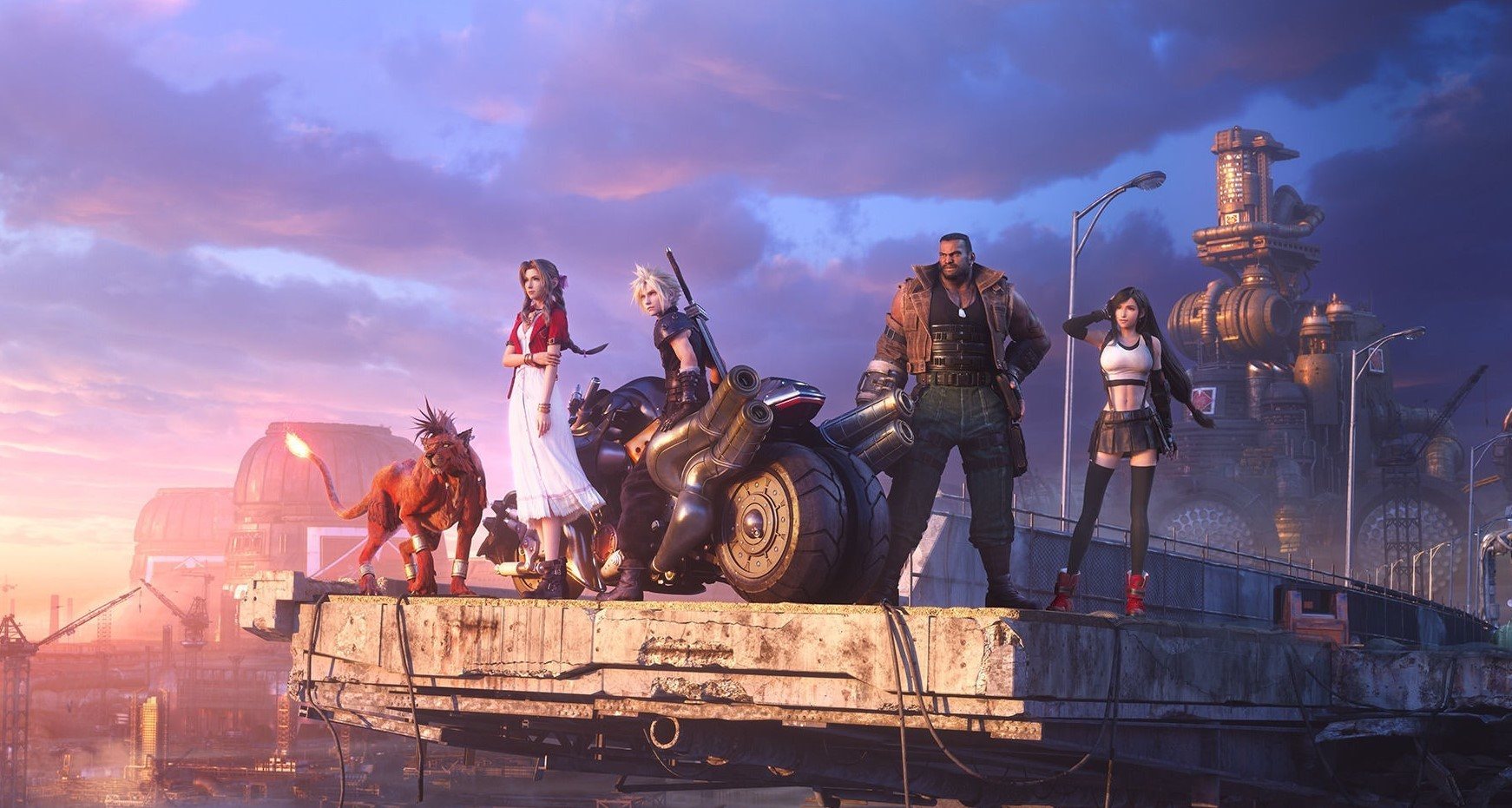