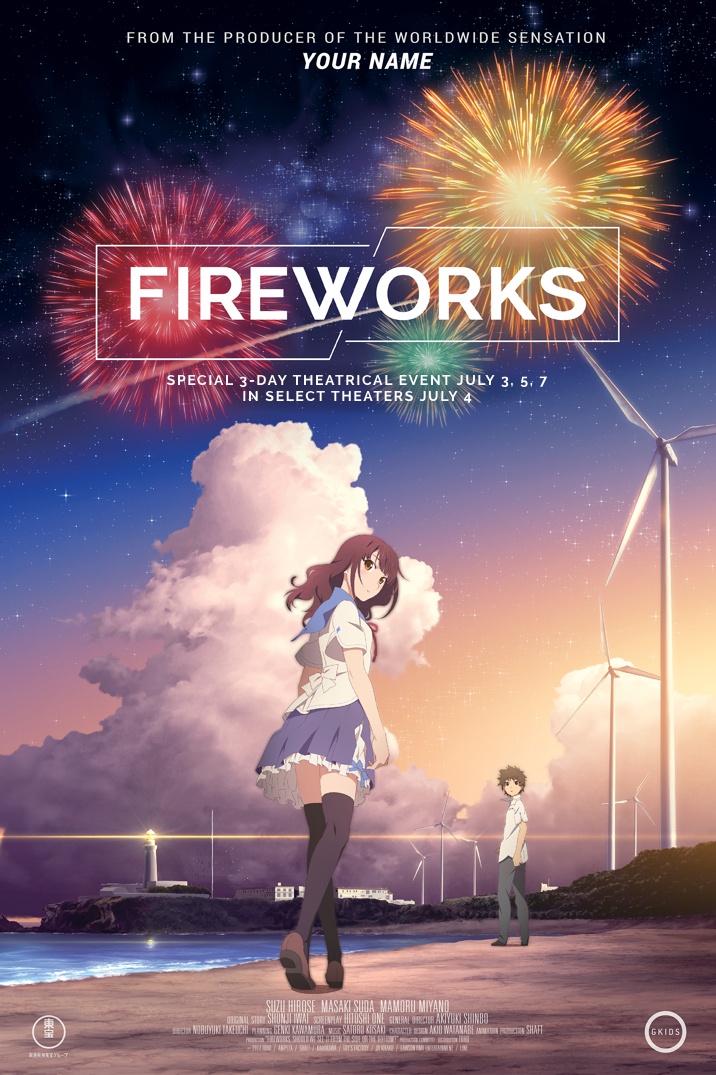 I’m a fan of many genres of film: animated movies, coming of age films, films centering on young protagonists, films set in summer–I could go on and on.

I put this particular film on my “To-See” list because it checked off the boxes on several of those categories and more. Plus, I’m always, always down to watch anime. With a premise adapted from a live-action television film and boasting fantastic animation, Fireworks looked to be promising.

While it is many things bright and beautiful, it misses the mark.

“Just this day, I wanted to be with you”

The film centers on a group of young friends, but mainly best friends Norimichi and Yusuke. Both boys are interested in their beautiful yet ever elusive female classmate, Nazuna Oikawa; yet only one is asked to take her to the see fireworks that evening. Unbeknownst to them, this will be her last day in town. Nazuna is moving, and won’t return after summer break.

The sci-fi twist of the story comes in the form of a magic orb that can stop time, giving you another chance to make something right. To create a world where you can exist, while keeping away the people and circumstances that you have no control over as a young adult, is riveting. The more and more the orb is used, however, the farther and farther the two get from what’s real and what is meaningful. The film carries on in this way, yet just doesn’t gel together in the right ways that would keep you invested as you watch. 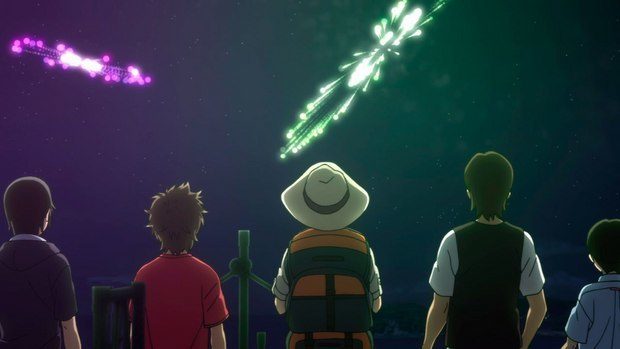 This is a tale that tackles missed opportunities and longing; of being young, reckless and running the streets. I felt this hint of optimism while watching. There were times when my heart wanted to soar, but the individual moments didn’t all mesh together with the magic originally promised from the trailer. This was most evident with the open-ended finale of the film, which left me and a majority of my fellow moviegoers with a baffled “WHAT?!”.

Nozuna felt flat. She never seemed to become more than a prop, a pretty doll, or capable of much more than running. As noted in my trailer reaction, I saw that she was severely unhappy with what little agency she has over her life. Her mother has decided to remarry and relocate the two of them to the countryside. She doesn’t gain much more throughout the film, as the inciting incident that jumps the film off is Norimichi’s activating the orb that blurs time and space as we know it. 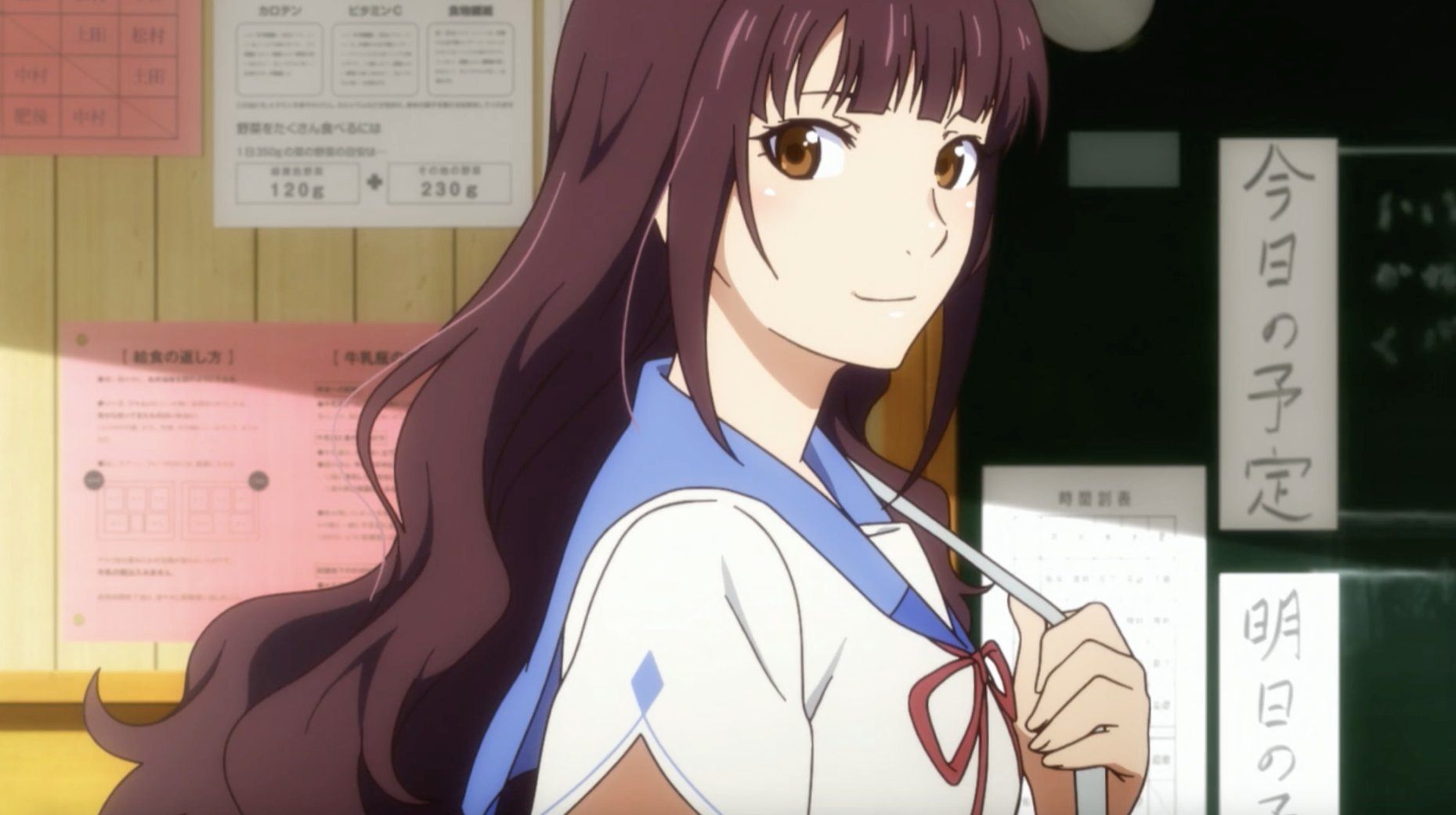 What doesn’t disappoint is the animation; which, as mentioned in my trailer reaction, was gorgeous. Coming from Studio Shaft — who brought us Puella Magi Madoka Magica, among many other eye-catching projects — this was a concern I knew that I wouldn’t have. It remains one of the strongest points of this film: so fluid, and on point. From start to finish this one is a visual treat: While all the sequences involving the magical time orb are rightfully breathtaking, there are many more stand-alone scenes. The dragonfly departing from Nazuna’s face earlier in the film, the various times at the lighthouse, Nazuna’s Little Mermaid dramatic coming up for air from the ocean…these moments pop onscreen, along with, of course, all the brilliant fireworks.

One thing that I believe is overlooked is how deft and necessary the score of the film worked its own kind of magic. It was mellow and tinged with sadness when it needed to be, impish and cheeky at times or intense and heart-pounding for other scenes. A sincere shout-out to Satoru Kōsaki (who has been credited for his work for the music for a number of anime series, including The Melancholy of Haruhi Suzumiya and Lucky Star) for his craft here which does not go unnoticed. 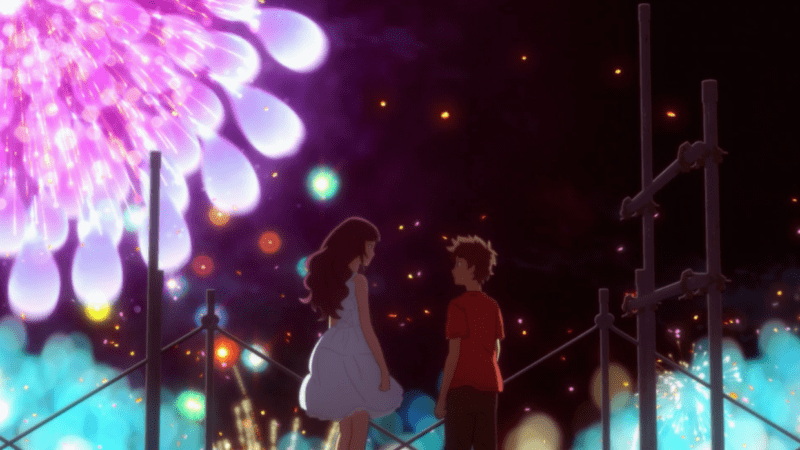 “I wonder where we’ll meet next in the world”

Granted, I watched Fireworks subtitled on its first showing in a small theater; with a smaller showing than other big Hollywood blockbusters, so I wondered how this film would translate culturally. There’s humor, for sure. Most of it comes from interactions from our teenage protagonists and their friends. The running gag around the town spread near and far of the question: “Are fireworks rounds or flat?” continues to grab a laugh from you in moments throughout from the kids.

At other times, though, I rolled my eyes at the antics which happened often enough I could hear folks near me groan. More importantly, the sometimes leering, almost voyeuristic point of view through the film (especially when it centered on Nozuna) unsettled me a bit. Film critic Justin Chang, in his review of the film, has elaborated more on the nature of objectification of the female body in anime.

While watching the credits, it deeply saddened me to hear more than just a handful of my fellow moviegoers passionately mention how Fireworks did not live up to Your Name — which Fireworks serves as the follow-up to (also a project with producer Genki Kawamura attached to). It doesn’t help that both films feature two teenagers connected by a sci-fi twist.

Now that it has made it dubbed to North American shores I fear it will be constantly overshadowed by the former film as the better product, and better story overall. In addition, I feel that Fireworks was a rather ambitious project with two different directors attached: Nobuyuki Takeuchi, and Akiyuki Shinbo.

This film isn’t a bust to me, though: not at all.

GKIDS continues to impress with their dedication to acquiring North American rights for localizing many great animated features like this (as well as bringing back the Ghibli fest for 2018 with Fanthom Events). Anime remains a Japanese product, that is easier to access thanks to globalization. Folks like GKIDS make this a reality on the smaller scale when I can see a film like Fireworks — something that isn’t attached to a big name property known to be a guaranteed money maker — at my local theater right outside of Los Angeles.

While ultimately Fireworks did not live up to be a summer spectacular for me, I don’t mind taking chances on films like it. If nothing else, Fireworks is a visual treat to enjoy during a time when some youthful abandon and optimism is welcomed. It is a lacking yet beautiful ode to the summer nights that we remember bursting with fireworks and hopes: the kind that you want to hold dear, always.

With that said, the preview of The Night is Short, Walk On Girl that played after the credits was enjoyable. I look forward to watching that when it hits theaters soon.

Fireworks is playing in theaters this week, continuing on July 5th and July 7th. Get tickets here.