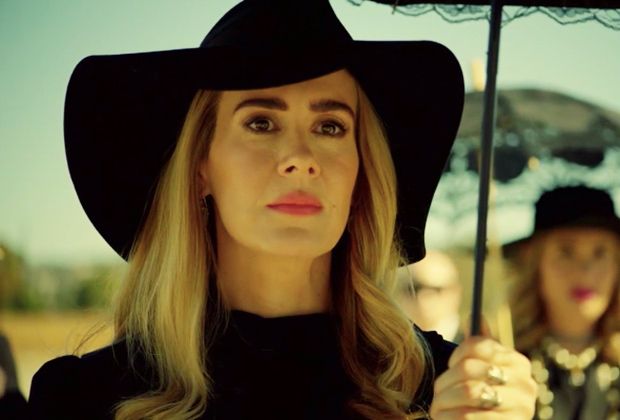 The last episode we returned to Murder House and got story times of several of the residents, including the return of Jessica Lange’s Constance Langdon. This episode was all about finding out who Michael is, and now that it is fully known that he is the Son of the Devil. What will our Supreme Cordelia do?

Tonight, we open on Dinah-Oprah, whom we’ve pretty much forgotten, as she rips the heart from a white woman and delivers it to another white woman for payment. Dinah-Oprah then makes a bloody heart margarita to feed to the woman’s husband who has be cheating on her. They force him to drink the concoction/potion which basically will only give him a hard-on for his wife.

Outside as Dinah-Oprah is leaving, she is greeted by Supreme Cordelia. After a moment where Dinah-Oprah tells Cordelia she’s got a lot of nerve coming to her after what the witches did to their queen Marie Laveau. (Well, I’m glad that she at least got an honorable mention.) But apparently, with the death of Marie Laveau, Dinah-Oprah became the new voodoo queen. Cordelia asks for Dinah-Oprah’s help to reach the voodoo Devil, Papa Legba. Dinah-Oprah seems reluctant to do it, but for $100,000 in cold hard cash she’ll do anything.

When we come back, it is to what I’m guessing is some old horror film featuring Grand Dame Grandmama Evie. (Yay! I got to say it again.) But this isn’t GDGE, it is Joan Collins second character for this season. She is now playing an old coven witch named Bubbles McGee. This is revealed when we hear her read a guy’s mind, and then Madison comes to fetch her because the coven is in trouble. 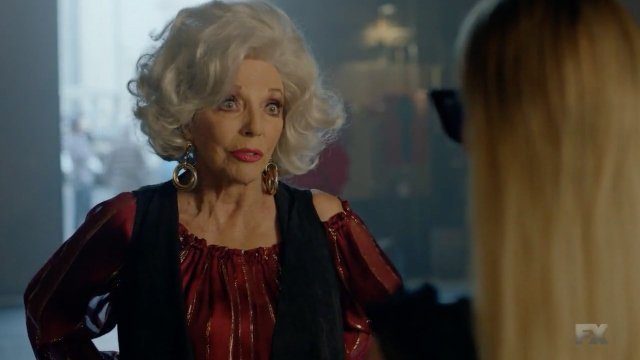 Bubbles joins Madison and Myrtle at a restaurant where they ask for her help to read the minds of the warlocks and see what their plan is. Bubbles’ power is a bit more than just reading minds; she can read the soul, the deepest darkest things that are hiding in a person. She agrees to help after some prodding from Myrtle.

While they are getting that plan together, Cordelia is with Dinah-Oprah summing Papa Legba (Lance Reddick), who comes up from the underworld ready to make a deal. In a quick aside, he tries to get Dinah-Oprah to take the deal he had with Marie Laveau: to bring him one infant child a year in return for eternal life. She refuses, but he brings out a special guest when he finally addresses Cordelia. NAN!! JAMIE BREWER!! (I’ve been asking for Nan, and they brought her back.) Papa Legba reveals that it was Cordelia’s mother Fiona and Marie Laveau who sacrificed Nan to him.

Cordelia feels so sad to find out this information, but Nan seems no worse off. In fact, she says she likes it down there and is Papa Legba’s special helper. Trying to move forward, Cordelia ask Papa Legba to open the gates of the underworld so that she can lure Michael in to be trapped. Papa Legba has a price for this betrayal of the Devil, well another Devil I guess, and the price is the souls of all her young witches. Cordelia refuses but offers her own soul, that of the most powerful witch in the world (at the moment). Papa Legba laughs, offers nothing else, and leaves with Nan in tow.

Who’s Really the Next Supreme?

Back at the witch’s mansion, Mallory, Zoe, and Queenie are kiki-ing about Michael being the next Supreme; however, Mallory doesn’t know, but is told, that for any supreme to rise the former must die.

Then, Coco (I really did forget all about her, and the fact that she is a walking gluten finder) rushes in talking about she has a new power. And you know what it is??? She can now tell you how many calories are in your food. I need someone to make full sense of Coco’s powers soon, because at this point I’m not sure of why she is here beside numbers. And to make this even more noticeable, she chokes on a piece of snowball (the Hostess kind, not actual snow).

Apparently, none of them know CPR or the Heimlich maneuver, and Coco is dead on the floor, while they are trying to figure out a spell. Mallory kneels next to Coco’s body, magically slices down the side of her neck, reaches into her esophagus and pulls out the snowball piece, and magically closes her neck back up. Coco comes back to life, and Zoe and Queenie are amazed with Zoe, saying she’s never seen anything like it.

Later that day, Cordelia is becoming weaker, fearing Michael is draining her with his rise. However, Zoe tells her that she thinks the next Supreme is actually Mallory. (Remember that Mallory can trace her bloodline all the way back to Salem.)

Across the country at Hawthorne, Myrtle and Bubbles are putting their plan into motion. They cook an apology dinner for GC Ariel and Baldwin, the last two remaining (what I’m going to call) warlock masters. John Henry is dead, and Behold, unbeknownst to them, is now siding with the witches.

During this dinner, Bubbles learns so much. The two biggest things are that GC Ariel helped kill John Henry and that both of them are planning to kill all the witches. Learning this, Myrtle says it’s kill or be killed. 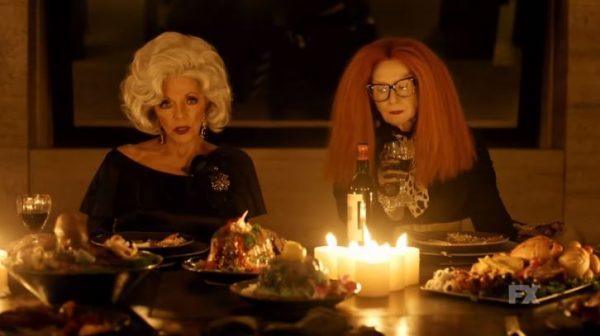 Time to Call the Coven Together

As the Coven eats dinner, Mallory is sad, of course, not wanting her rising to be what kills Cordelia to which Cordelia tells her that is just how it goes and would rather it be her than Michael. Behold, who is with them, believes they are taking this for play-play that the Antichrist is out there getting stronger and going to destroy them and the world.

Cordelia tells him that she doesn’t take it lightly, going so far as to go against Coven rules and resurrecting Myrtle who forced Cordelia to burn her at the stake for killing two other witches. (This all of course happened during the Coven season. Go back and watch it!)

On a little outing, the witches return to the little gas station area where John Henry was murdered and burned. Cordelia has Zoe magically bring back his wind scattered ashes, and then as a part of her Seven Wonders test, has Mallory bring John Henry back to life. After which, they tell him of GC Ariel’s betrayal, and he tells them that he was killed by a woman.

Cordelia gives calorie counting Coco a task, and that is to kill the woman, (Miriam) who has been helping Michael. Coco is a bit scared but ready. She follows Miriam out to her car and almost messes things up cuz she’s trying to be a badass. Thankfully, the cavalry is there to help take Miriam in.

Back at Hawthorne, Baldwin has prepared a powder that will only kill women that he and GC Ariel will use to kill all the witches, and thus allow Michael to ascend to the Supremacy. But that shit gets shut down quick when Cordelia walks in. First, she reads Baldwin for plagiarizing his powder like it was an original, when it was in fact created by a witch named Agnes Samson in 1590, he just made it so it would work on women instead of men. (Reading, with facts, is fundamental. Never forget that.) She then sets the powder on fire. As they are trying to object, she literally makes their mouths disappear from their faces; just nose to chin skin.

And now as we prepare for the benediction, let’s a pray over the food. In this case, it’s a 3 for 1 roasted at the stake of Ariel Augustus, Baldwin Pennypacker, and Miriam Mead. And guess who gets to man the grill…well it’s a resurrected John Henry Moore, much to their surprise, but this is also because of Coven law a witch can’t burn a warlock for their crimes and vice versa. So if not him, it would have been Behold.

Miriam is going on about being ready to die for what she has done, and I’m not surprised. However, because Cordelia never gave Baldwin and GC Ariel their mouths back, we can’t hear them scream anyway.

Final Thoughts *sits on the edge of my couch*

First off, I’m super excited to see that they brought Nan aka Jamie Brewer back, even if it is probably only going to be for this episode. I also love how they evolved her to be twisted by Hell. However, I still would have loved to see her back for real for real.

Things are really heating up (no pun intended…well maybe a little) as we get closer to seeing exactly how Michael brought about the end times. Also, the pieces are falling into place to see how Cordelia hid Mallory and Coco away so that they could survive.

At this point, we technically only have three warlocks left in Michael, Behold, and John Henry. I wonder how that’s going to play out, since we don’t see either Behold or John Henry during end times.

Next week, Michael finds out that Miriam is dead, and I’m sure that’s going to kick his evil in overdrive. I’m also wondering who are these new characters that we see Evan Peters and Billy Eichner playing that seem to want to serve Michael. And with next week’s episode falling on All Hallows Eve, I’m hoping to get some good horror.

Well, until next time, go have some barbecue…lol