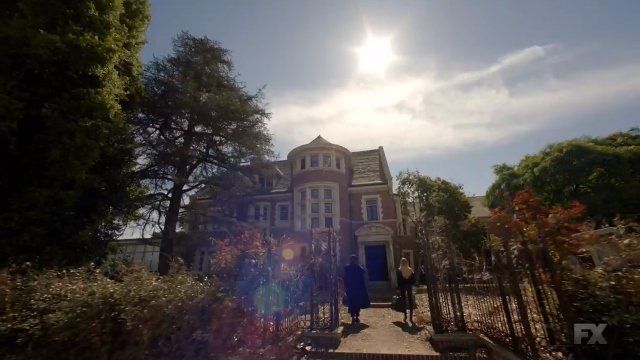 The last episode brought us the backstory of how Michael continued his rise to power, including proving that he was strong (if not stronger) than our reigning Supreme Cordelia. This technically makes him the first Alpha warlock. However, our Supreme will not be out done, and we are headed to the beginning to get answers….to Murder House.

In our opening, we have Madison playing wifey to Mr. Chablis in a charade at the bank to buy the house that’s been abandoned for decades. Their money wire transfer goes through (I’m wondering if it was magical or legit), and they get the house. Dressed in all black…because you know, it’s Wednesday…they pull up to the house and all its horrifying glory. We are home.

Mr. Chablis has to use the key to open the front door because his powers are being dampened by the house. In they go. Upstairs Mr. Chablis prepares to perform a spell so that they can see all the dead inhabitants in the house (because as ghosts they have the ability to be seen at their own will, and that’s not going to work for us). Aided by Madison, the spell works…and boy does it work. They encounter a couple of the murdered residents before going downstairs and finding Dr. Ben Harmon (Dylan McDermott) stuck giving dead therapy sessions to Tate Langdon (Evan Peters), one messed up young man and the ghostly father of the Son of Satan, Michael Langdon. They are both surprised when they realize that they can be seen by Madison and Mr. Chablis, who immediately ask for information on Michael.

Madison picks up a red bouncing ball that comes down the stairs and is jumped by the house ghost that we know is one of the children of Constance Langdon. Chablis is about to banish him but is stopped by Billie Dean Howard (Sarah Paulson in her third and final character change for this season). But the most important moment here is when the queen of American Horror Story makes her return coming down the staircase. 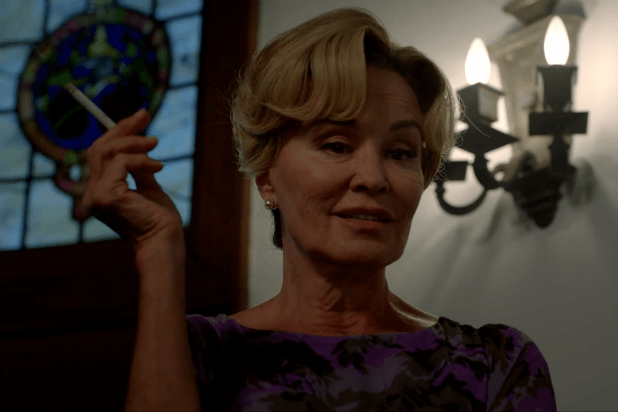 “I’m Constance Langdon, and this is my fucking house.” (Note: Constance is the grandmother of the Son of Satan.)

The Lady of the House

After introductions, Moira (Frances Conroy’s second character) comes out still stuck in her maid uniform and cleaning for all eternity; however, she is now at a point where she leaves stuff undone just to make Constance mad. She even mocks her by saying she will go have sex with Constance’s husband in the basement (Constance shot them both while they were having sex, though Moira was forced into the affair).

Though the jabs are fun, Madison and Mr. Chablis are here on a mission and ask Constance about Michael. She pauses for a moment, but she tells them that if they are the powerful witches they claim to be (see I told y’all the use of the word “witch” works for males too) she has a job for them. If they can get Moira’s soul out of the house, she will tell them everything they want to know.

In the backyard, Mr. Chablis has taken to doing manual labor and is digging to find Moira’s remains (bones at this point). They are able to find them and present them to her. She breaks down, kneels before them, and thanks them. They ask where she wants to be reburied. It’s in the one place she always wanted to be…with her mother. After magically covering the grave with dirt (so they couldn’t magically just dig her body up earlier?), they leave.

In a moment that truly brought tears to my eyes, we see Moira finally reunited with her mother, and they depart together. What made me cry about this moment was that of all the spirits stuck in the house at the end of the first season, Moira was the one I felt the saddest for and wanted her to be free. And to see that moment finally come was just pure joy in a show that’s all about horror.

Constance begins her story of the life of Michael Langdon with his birth in the house (something we saw in Murder House), and how she took him once Ben and Vivien (Connie Britton) were dead. She tried to raise him well and didn’t think much of the little bad things he did (seeing as Tate was her son and he was a mass murderer). She thought everything would be okay, and that he was your everyday garden variety serial killer.

But after having buried one too many skinned animals beneath a rose bush, Michael progresses to killing his babysitter by slitting her throat. Constance’s motherly patience is at its frayed ends. She’s pushed over the edge when she enters Michael’s room one morning and finds he has aged 10 years (8 to 18 more or less). He later tries to strangle her in her sleep, clearly being controlled by his true evil nature. Well, Grandmother Constance has had enough and calls in a priest, who Michael murders and goes back to playing on his handheld device.

Constance isn’t going to wait to be next. She goes next door, commits suicide by swallowing a bunch of pills and alcohol, and is happily greeted in the Murder House afterlife by three of her four children. (The other child, Addy (Jamie Brewer), died in the street, so thankfully she isn’t stuck there.) And so, Constance became just another ghost in the house menagerie. 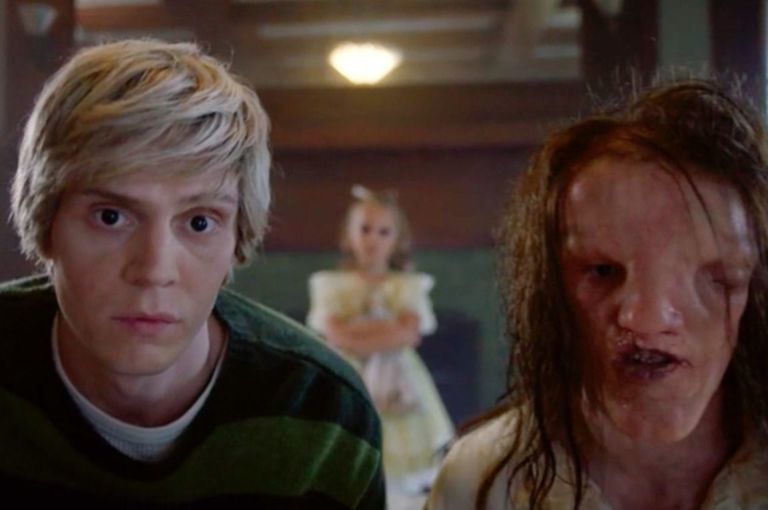 And thus ends story time with your host Constance Langdon.

The Doctor Will See You Now

We find Tearjerker…I mean Ben upstairs standing in the window spanking his monkey while crying. Madison and Mr. Chablis are standing at the door (I’m hoping they were just walking up). He picks up the story after Constance’s suicide, when Michael comes to the house and finds her body.

Ben allows Michael to see him (and knowing Constance she told him about the ghost in the house…well some of them). Ben tells Michael that the reason he can’t see Constance is because she doesn’t want to be seen. She went there to die and be with her other kids. In this moment, Ben decides to try and be a father figure to his “son.” He tries to help Michael be good, but what he didn’t realize was he was really teaching him to hone himself (leading to the in-control Michael we see in Apocalypse.)

One day, there is a brief exchange between Michael and Tate (his real father) where Michael, while holding the rubber mask that Tate was wearing when he impregnated Vivien, says he wants to be just like him, aka his dad. Tate lashes out at him saying, he could never create something as evil as him. This seems to kick off Michael’s darkness.

He begins doing sick experiments on the willing house ghost, Black Dahlia. The house eventually sells to a couple. On their move-in day Ben witnesses Michael, dressed in the full rubber suit like his daddy, not only murder them, but when their soul leaves their bodies, he destroys them. Effectively, he erased them from existence completely, no afterlife at all. This is the moment Ben gives up completely on Michael.

Madison has heard enough about this pure evil being and is ready to get back and tell Cordelia; however, there is one more resident ghost who has something to say.

Vivien Harmon enters the room and begins her tell by going straight biblical on us.

As the music that sounds like the coming of hell on Earth rises in the background, Vivian quotes scriptures about the end times, the Beast, the Anti-Christ.

“…and then I saw a beast with 10 horns and 7 heads rising out of the sea…And all who dwell on the Earth will worship him…” Revelations 13:1 and 8

Vivien, who thus far has been portrayed as just a vessel for the demon spawn of Satan, decides to have a little convo with Mr. Chablis and Madison. She tells them that everything about Michael is unnatural to her. Strange things began to happen after Michael killed that couple, culminating with three Satanists coming to the house, including Miriam Mead. This is the definitive point where they meet, and why she knew exactly what, or rather, who he is. 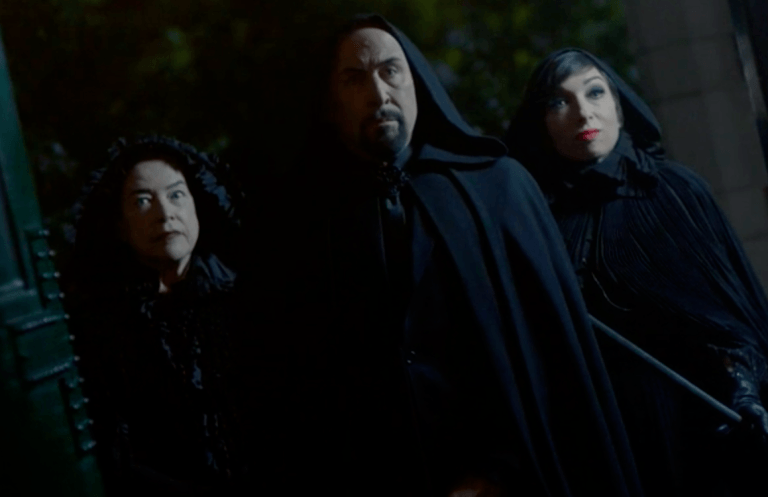 The rest of the ghosts in the house took the Satanist for fools until they performed the Black Sabbath ritual in Michael’s honor. They cut open an innocent girl while she was still alive, pulled out her heart, and gave it to Michael to eat. After taking a good size bite, the evil Satanic music begins again, and a demonic image appears on the wall behind Michael. He says, “Father, I am with you now,” proving once and for all that he is the Son of the Devil.

At this point, Vivien had had enough and decided to kill Michael. But Michael is pretending to be asleep when she comes into his room (Btw, we get a glimpse of the raised flesh scars behind Michael’s ear that are the “666” Mark of the Beast). He set her on fire, and is about to erase her from existence, but Tate pulls her from the flames and gets them out of there. Michael leaves after that.

Mr. Chablis and Madison know it is time to go before it is too late, but Madison wants to do one more good deed for a couple of residents in the house. She reveals Vivien’s memory of Tate saving her life to Violet (Taissa Farmiga). This gets Violet to forgive Tate, and we see them hugged up in a window as we leave the house. Madison magically closes the gate behind them. Because the Coven now owns the house no one (hopefully) will bother the ghosts or die in the house again.

My final thoughts this week will be short. This episode was the directorial debut for Sarah Paulson, and I believe she did an amazing job. I really enjoyed this episode. It was nice to catch up with at least some of the ghosts in the house. I truly believe that the writer of this episode listened to fans from the Murder House season when everyone wanted Moira to escape the house and gave it to us in this episode. Kudos!

As for next week, it looks like GC Ariel and Baldwin are up to no good, and Cordelia goes to Dinah-Oprah for help with an appearance by Papa Legba. So, we’re going to get some voodoo magic next week. Now, I really wish Marie Laveau and Nan were coming back too. (I’m going to keep saying that even though I know Angela is busy with 9-1-1 lol.) Told you this season might as well be called AHS: Coven 2 or something, but I love witches so it’s all good to me.