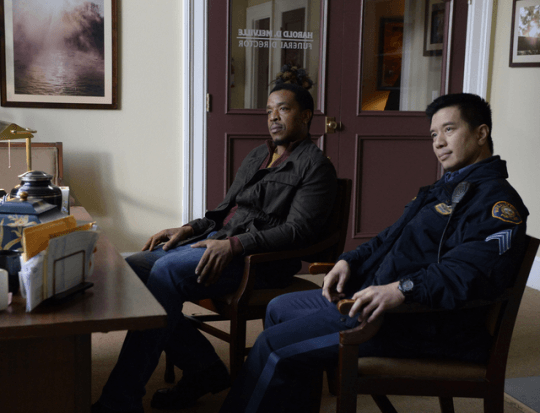 “No man chooses evil because it is evil; he only mistakes it for happiness.”

Nick, Eve, Monroe, and Rosalee are in the basement of the Spice Shop still trying to make sense of the cloth-calendar. They know something is happening soon, but when and what are still a mystery. Monroe finds a photograph of a painting on the ceiling of a chapel from the 14th century that might be related; what if the mythological creatures in the painting were artistic representations of Wesen? They can’t be sure. They decide to call it a night. Well, everybody except for Eve. She’s like “yeah, as much as I love listening to you and Adalind make the beast with two backs while I sleep in the kiddie bed, I’m gonna pass.” Monrosalee offers her a place to crash, but (again) she passes. She’d rather stay at the Spice Shop alone and keep working on the calendar mystery.

Across town in a science lab, a scientist is doing science-y things in a lab when a disgruntled man walks in on some “You have to help me.” But labcoat tells him to get to getting and then, when he doesn’t immediately comply, she threatens to call security. Dude leaves. As soon as he does, she calls her friend Raju. “Shelley was just here.”

Raju and the good Dr. Deirdre Hampton were obviously up to some darkside science with Shelley. Raju tells her to calm down and reassures her that there’s nothing Shelley can do to them. She seems unconvinced. But before she has time to worry about it, she dies. By dies I mean is beaten to death in her lab by an unseen monster.

Meanwhile, in the cozy Spice Shop bachelorette pad, Eve is looking into a handheld mirror tryin to figure out how she got here.

When Skeletor from the last episode shows up. Eve is not trying to go though that again, so she smashes the mirror. Plot twist: as she is grabbing a broom to kill it up, it reassembles. And then Even does some dumb shit: she looks into the mirror and that’s when Skeletor reaches through the mirror, grabs Eve by her throat, and starts choking her. Welp. What’s a girl to do?

Woge. Woge and bite the shit out of his arm, that’s what. Eve is all hexenbiested and molar-deep in dude’s arm. He flings her backwards away from the mirror, she hits her head and falls down.

And that’s where she is — on the floor next to the mirror —when Rosalee and Monroe come back to the shop. They call 911 and then Nick. Nick has an… interesting response.

Nick’s absence leaves Hank and Wu to solve Dr. Deirdre Hampton’s murder on their own. They backtrack to her friend Dr. Sanji Raju through her phone — the last call she made. Elsewhere in the land of JustCan’tMindMyOwnBusinessVille, Renard is Skype-ing with an old friend in Siberia. Of course he’s showing her Diana’s drawing because of course he is. She promises to look into it.

About that time Nick arrives at the hospital. Monroe and Rosalee fill Nick in on the circumstances of her accident including the detail about the mirror. Nick finally (finally!) tells them about the bathroom mirror incident. And thank you Monrosalee for asking incredulously why he didn’t tell them earlier.

Hank and Wu arrive at Dr. Sanji Raju’s house to ask him a few questions. They tell them about the phone call, but he claims it was research related. He says all the right things but still they have a bad feeling about him.

At the station, Hank and Wu start digging deeper into Hampton’s research. Besides Raju, she was working with a Dr. Julian Levy and Dr. Victor Shelley (the guy who came knocking on her lab door). Turns out the fab four were researching human tissue regeneration.

CSI turns up two sets of fingerprints from Hampton’s office and that would be a good thing except for the fact that the fingerprints belong to dead men with criminal records. Both sent to the same cemetery. To be cremated.

Meanwhile, one of those arms, still very much alive and attached to a young man, is walking down a Portland street. He sees a missing poster with a man that could be him if he wasn’t disfigured. He angrily reaches out to rip the poster down and he woges. Well, his one arm woges. Hmmm.

Hank and Wu pay a visit to the place where both the dead men were cremated, the Hills and Mazy Cemetery. Turns out that most of the bodies at H&M were sent there by the state: John and Jane Does, wards of the state, etc. They quickly find out that old dude mortician has been selling bodies to a guy in a van for $1,000 a pop.

At the Spice Shop, Monrosalee lock the mirror away in a drawer while they try to figure out what happened.

The good doctors Levy and Raju are in their office shredding files and talking about how they never should have helped Shelley. Levy asks if he destroyed his video. Video? I don’t know what they did that has them this shook but why did they record it? Why did each of you separately record it? You know what I call that? Exhibits A – D. As they’re shredding stuff, Raju asks if Levy thinks Shelley could’ve killed Hampton. “No, not in his condition.” And that’s the moment when it dawns on them that in his condition, he couldn’t have killed “it” either. Not sure who/what it is…

Levy leaves to go destroy his video and that’s when Raju catches the ultraviolence from the dude with the woging arms.

Hank and Wu show up at Shelley’s house to question him about Hampton’s death. He admits to talking to her the night she died around 11. Same deal as Raju, nothing solid, but they have a bad feeling about him. As they’re leaving they’re talking it out: whoever bought the bodies has to be connected to the murder. They bring in the body-dealing mortician who identifies Dr. Levy as the guy who bought the bodies. Hank and Wu figure out that since the mortician deals mostly in unclaimed bodies paid for by the state, that the bodies of the Black Claw operatives that Nick killed – the ones these cops dumped in the river – could’ve ended up at that cemetery and then in that shady bodysnatching van at a thousand dollar a pop.

They bring Levy in and let him know they know he’s been buying bodies. Dude cracks. He’s sings the entire song of how Shelley was in a car accident that hurt his legs and killed his son. They ask him if the bodies were Wesen and it’s obvious he doesn’t know what they’re talking about.

But dead men don’t woge, right? Right? So… um how… Hank thinks they should look into Shelley’s dead son to see how he may be a part of this. They’re researching that and the work Raju was doing on human tissue transplants when they get the call about Raju’s murder. On the scene, they find a flash drive. I’m guessing Raju meant to destroy that.

Meanwhile Nick is still at the hospital by Juliette/Eve’s bedside flashing-back to their life together from love to hexenbiest to her involvement in him getting his mom’s head via USPS.

At the Monrosalee household, Monroe is having the crazy anxiety dreams: Rosalee goes into labor and he has to deliver the 1,2,3,4,5,6… babies. He wakes up in a cold sweat like “What have I done?” So typical first-time parent shit.

Hank and Wu find the video file on the flash drive and it essentially looks like the doctors playing God and trying to bring Shelley’s son back to life. He’s got mismatched arms and legs and they are all woging separately.

Things clearly got out of control. They sedate the kid and everyone but Shelley is like “kill it! Kill it!” but Shelley clearly doesn’t.

While all this is happening, Renard’s Siberian friend Skypes back like “This is probably bad. Something is coming. Your kid drew this? Watch her. Watch her because if she’s connected to this… [then shakes her head like an old Black woman who don’t want to tell you your kid is bad, but knows your kid is bad].”

Cut back to Shelley’s son wondering down the street in Portland. A woman sees him, sees the flier, and calls Shelley, who is in his garage/secret medical experimentation lab. Before Shelley leaves, he grabs a gun. But before he can get out the door, Levy shows up and confronts Shelley about not killing “it.” Then Hank and Wu crash the party and let them know that 1) they know what they did and 2) Raju is dead.

Levy is like “I’m out” until you all kill that thing. That was a bad idea because he walks out into the night and into the open woging arms of Shelley’s son. Levy is getting his ass beat by the time the other three men get other there. Shelley shoots his son and then tries to shoot himself. Hank isn’t having that; someone has to explain this.

At the hospital, Juliette/Eve wakes up. She tells Nick what happened with the mirror, including that she woged. She is sure that something is beginning and that they don’t have much time.

I have so many questions: So he called her Juliette? When is the clock counting down to? What did Nick say to Adalind about sitting vigil at Juliette’s bedside all night? What is Renard going to do with his newfound knowledge? More importantly, what is his friend going to do with it and with the image he sent to her? Are we going to get a Juliette character with the power of Eve?