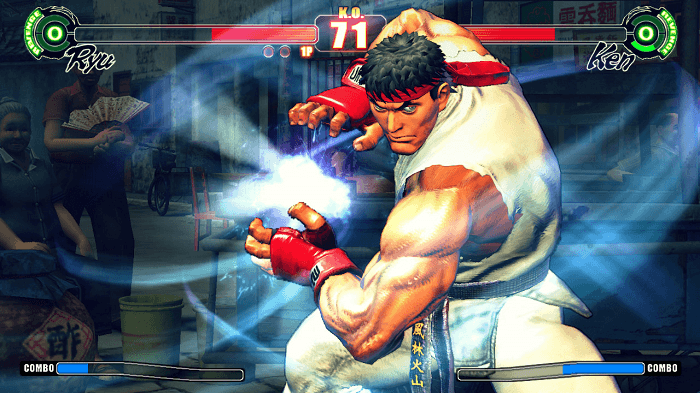 For many, the 90’s was the golden decade for hip hop. We listened to DMX bark without question and didn’t laugh hysterically at Cash Money album covers. Quite the contrary, many of us took our money to Sam Goody and bought 400 Degreez. Rap music came into its own in the 90’s, evolving from a fringe border of popular culture to the forefront of music sales, awards shows, and celebrity news. Possibly one of the more unforeseen impacts has been its impact on language, with words like cray and YOLO being added to the Oxford online dictionary just this year. Thank you 90’s for paving the way with jiggy, dope, and bling bling, because without you, this may have never been possible. One day archaeologists will discover fossilized remains of these artifacts together, solving the riddle of media retail stores’ speculated existence.

And Street Fighter – if I had spent half the time perfecting evasion strategies for Sagat’s high-and-low fireballs on studying science, I would be Neil deGrasse Tyson. I wouldn’t, however, have the edge on Sagat, so, you know, tradeoffs. A genre-defining game, Capcom’s Street Fighter became so iconic the company has basically re-released the same game for 27 and years and counting. It was so successful, competitors bought into the game design themselves, creating “street fighter clones” so similar to the original that if you were good at one game, you were good at them all. If you played Samurai Showdown you know what I mean. 2D fighting also came to its peak during the 90’s, a parallel road alongside hip hop, two roads without intersection. Until now.

In 2013 during the concert series Drake vs. Lil Wayne, fans were able to pick who performed first and who “won” each show by having had the better performance of the night. Fans voted by using an app, and that’s where things got interesting. Not because fans could interact with the performance in a new and creative way – I mean, I guess that’s interesting too – but more so because of this. That’s right: you bear witness to Drake as Ryu, and Weezy as… is that Blanka with dreads? Or Dee Jay with fangs? Whatever, it’s rappers as Street Fighter characters! This is the best culture collision since Tiny Fey and Amy Poelher photographed with Ja Rule, and a reason to celebrate! In this latest instance of subculture connectedness, let’s cast some of our favorite rappers as fighters from the most important 2D fighting game of all time. May rap beef never be the same again. Select your character! While his special moves are unexpectedly fast, Rozay’s basic moves are slow and misogynistic. Keeping distance is key for opponents, as close-quarter combat could result in a bear hug-like grapple.

50, on the other hand, has a fast wit and slow punch. Living off the legend of his 2003 debut bout, he has quietly become a sloppier fighter than you might expect. His social media barbs have been known to taunt opponents aggressively, but those un-intimidated by his physical prowess, however, can find themselves on the better end of the fight, as it turns out the dogs who bark the loudest are truly often the weakest (and lately, the brokest). It has been a great few years for women in hip hop. Remy was released from prison and teleported directly into a studio, Iggy Azalea’s been largely exposed for being… well, Iggy Azalea, and Nicki Minaj has catapulted to full hip hop goddess status. Their Street Fighter characters gotta fight.

Nicki, one of the most prominent fighters in the past 5 years, has a diverse mix of combat styles and confidence to boot. Iggy, a relative newcomer, was the up and coming pupil who turned into, well, whatever stain she is now on the collective hip hop conscience. The veteran bearded fighter against the young successful phenom, this is less a brawl than a handicap match for many purists of the sport. Were combat a popularity contest, Drake would win both rounds; but victory here in the 2D arena does not concern itself with fame. Of course, as Common himself admitted, Drake is a very talented warrior. Originally mis-casted as Ryu, however, Drizzy is better befit as Vega; more lover than fighter. Swooning fans and a porcelain mask of rough-and-tumble street cred does not a champion make. While a very popular character choice, if trying to beat the game as this character, consider lowering the difficulty to 2 stars. Meek Mill available on DLC? An acquired taste for some, as both have unorthodox fighting styles, these two characters can be shamelessly fun to play. Bonus Round! How many points were earned for this? He must have been paid so many points! But of course his career is over because, you know, tradeoffs. Prophetically, this fighter actually predicted his own future in 2006 with uncanny accuracy.

In this round, you have 60 seconds to destroy this car to restore the fragmented pieces of your illustrious career. Go!

So pop a bottle and raise a glass, ladies and gentlemen, because this deserves a toast. Here’s to Young Money’s brilliant marketer and graphic designer who brought us this blessing – may you never be forgotten for the bridge you created in 2014. Rap and Street Fighter are now two rivers collided in a sea of nostalgia and we are playing in the delta. To every hip hop head and classic gamer, here’s to you. And if after this journey you are dusting off your console and find yourself against Sagat, a word of wisdom for all: jump in close and then ↓ + HK, he rarely blocks the sweep.