This article has been updated from its original version.

In 1998, two underground Brooklyn emcees postponed their individual projects to collaborate on a full-length album, and the result was Mos Def and Talib Kweli Presents: Blackstar. Around the same time, another artist transferred from Pennsylvania State University to a cell in prison where he wrote verses behind bars in what would become Revolutionary, Volume 1. I can remember the first verse I heard from Jean Grae, the first track I heard from Brother Ali, and the exact song that made me give Atmosphere a chance after five recommendations from Pandora prematurely thumbed down. They all began with skeptical resistance, followed by a raised eyebrow after the third or fourth bar, followed by “What’d you say their name is again?”

I can also remember the first webcomic I browsed online. It came in an email with a single link, with a subject heading that read “Read.” It sat in my inbox for 3 sunsets, which is an eternity for someone who keeps their inbox cleaner than hospital rooms. Leaving an email for 3 days says I care nothing of the message it brings, and that it only remains un-deleted in sheer respect to the sender. A good friend had sent it, so before the sun set on the fourth day I begrudgingly clicked the link, raised an eyebrow at the third or fourth panel, and replied “Where’d you say you found this again?”

We previously covered the comedy of hip hop and classic gaming, and now the genre teaches a new lesson in creative art: some of the most incredible works are the secrets you are least likely to hear or read. In comics, those secrets come from the fire inside an artist that burns hot enough to draw in their living room or basement, without promise of compensation, because they have a story to tell. It means hosting a website and sharing a piece of you to the world for free because any scrutiny is less damaging than keeping that story to yourself. It comes from a garage at 2 AM. It does not originate at DC or Marvel. With an increasing readership, new Eisner award categories, and the comic industry’s growing fan base, recognition for noteworthy webcomics are on the rise as popular sites like XKCD and The Oatmeal are being joined by long-form online stories.

[divider type=”space_thin”]
If a webcomic creator survives the long hours of unrecognized dedication for long enough they might find a home with a larger publisher to lend them credibility, but it will never be the publishing company that gave them their talent of storytelling; they will only monetize it best. Quite the contrary, major publishers have constraints that can stifle creativity to the detriment of artists. There is a reason many of our favorite works were the earliest from their artist. It’s not that we are nostalgic; it’s that they were actually better. Supporting independent artists are to support them when they are hungrier, freer, and more in need of your support than any other time in their career. And for new writers, their webcomic may be to their career what Mos Def and Talib Kweli’s Blackstar was to underground music – a unique exploration of new perspectives in an old medium.

Take this, for example: a Black, queer teen named Charlie enrolls in a Christian camp and meets a spitfire transgender teen in a comic that explores gender and identity in Melanie Gillman’s As the Crow Flies. A brilliant ongoing series, As the Crow Flies tells a story unlikely to be featured on the top shelf in your local comic book store.

[divider type=”space_thin”]
A newer webcomic, created by Jamal Campbell, tells the story of a girl named Nadia Greene dealing with her own mortality and the physical manifestation of death. Instead of submitting to death Nadia picks up a baseball bat, and the rest is for you to read and enjoy (the series is updated on Tuesdays and can be found here).

Failing Sky captures storytelling in a way hardly even possible in traditional print, utilizing readers’ browsers to navigate stories across interlocking plots and characters. A perfect example of independent creators on the cutting edge, Failing Sky is the product of creativity and innovation that allows you to follow a character of interest or choose to transition to another through clicking important objects placed in the story.

For all that we want in popular entertainment, from body-positive messages to broad representations that reflect our diverse lives, there are independent writers creating it. They’re out there. You can meet them at conventions, sitting on panels, or promoting their work on Tumblr. However you find them, you’ll be glad you did after reading their work. Sites like Patreon have become an easy and important way for you to financially support your writers of choice as well. Sign up to pay $1 a month to your favorite creators to help them with website hosting, art supplies, or basic costs of living. If you enjoy the story, it’s an easy and relatively inexpensive way to keep it going. Take the $15 you would spend in a theater this Friday and become a patron of a new artist instead. Revolutionary Times creators Brandon Howard and Sean Mack are more likely to need and appreciate your support than Matt Damon. 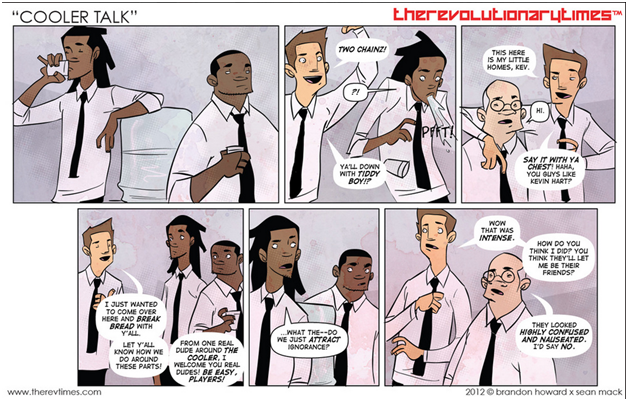 We have all been told that our support is crucial to independent artists, so much that many of us are callous to the message. The fact of the matter is that talent comes from the bottom up, and if your ear is tuned to the underground, you witness the most creative and unfiltered artistry the world has to offer anyway. You are doing yourself a favor as much as you are supporting the future of creativity and diversity in entertainment. And raising your nerd status is an added bonus. Let’s face it, most traditional comic characters are hardly geek anymore – they became mainstream entertainment with multi-million dollar movie openings. Scientifically speaking, you lost 33% of your nerd credibility the day Tony Stark became as much a household name as Robert Downey, Jr. If you are a fan of comics, webcomics are the new underground geek frontier to get that 33% back. After all, your life would have been fine without Blackstar, but isn’t it better with it?