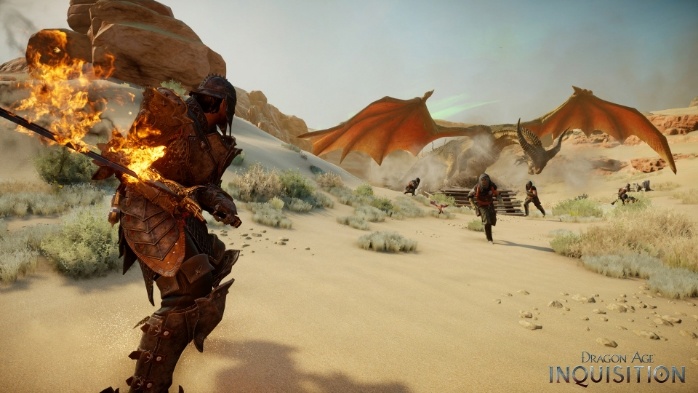 Dear BioWare: I was skeptical about all of the hype surrounding the characters in your new RPG, Dragon Age: Inquisition. But really, you outdid yourselves. You brought all the best parts of Mass Effect — the organizational meta-game; the choice system; the interesting, complicated NPCs — into a high fantasy genre that’s really been suffering. Thanks for that. While I’d like to be able to give my player character kinky hair (work on that for next time) the customization options are truly staggering. Thanks for that too. Thanks for letting me turn off the gore and take off the helmets, because some things are just distracting. Thanks for giving me a Black female NPC who is so fabulous, people are writing articles about her fashion choices. Thanks for treating me, Black female gamer me, like part of your core audience. I’ll see you when the DLC comes out, debit card in one hand and controller in the other.

I’m about 35 hours into BioWare’s latest video game, Dragon Age: Inquisition and I’m loving every minute of it. I’ve made it through 3 TPKs. I’ve out-run 4 very angry bears, lit 5 tower beacons, built like a hundred camps, traveled back and forth across a gigantic board and I’ve almost decided who I’m going to romance (something about Blackwall’s beard calls to me, but the Iron Bull….mmmm). Sure, the game has some glitches – quite a few team members have half-disappeared into table tops, and there’s that audio bug that ruins occasional conversations – but overall, I’ll be damn happy to spend my winter being the Dalish Herald of Andraste and saving Ferelden from threats foreign, domestic, and Fade-borne.

But I’m not here to tell you about how much I like the game, or to recommend that you buy it. You’ve read that article, it has been circulating around the Internet for months. If you wanted the game, you’d have already bought it, unless you’re waiting for it to hit the used shelf at GameStop. Folks gotta economize. I get that.

What I am here to talk about however, is the hype machine around BioWare, this game, and the “diversity of the characters.” I’ve been linked to a number of articles in the last two months about how diverse the NPCs are in Dragon Age, and how that’s a major breakthrough in a AAA title. Excellent. I agree. What some of these articles come down to is this: The core of the game, the War Room, is a group of 5 people (one of them your character) standing around a table planning the Inquisition. Three of those people are women and no one notices. There’s no dialog about the “gender imbalance” of the group. The male soldier doesn’t make a quip about being surrounded by laydeeze. It simply is what it is and that’s great. An excellent point. Kudos to BioWare.

How often is the race of the characters mentioned? And I don’t mean the elf/dwarf/qunari race, I mean the fact that of the human population, fully half of the NPCs are browner-skinned than others. One of your primary party members, Vivienne, is a brown-skinned sister with a natural hair cut, deep red lips, and a penchant for fire. Even the elves come in more than one shade! Black elves! We live in the best of all possible worlds! Now let’s be clear: I don’t expect every commentary on a given game or cultural artifact to include mention of every aspect of representation. That’d be dumb; the damn article would be infinitely long. I also don’t expect/require that White writers comment on issues of Black female representation. We’re here, we can do that for ourselves. What I would like to see is honesty in advertising. If you’re going to talk about things of interest to you, name those things up-front; “Gosh, I was so impressed at all the White women that BioWare included in the game!” That would do it. But don’t talk about “women” then provide a lot of commentary about White women as if they’re the only ones worth talking about. That’s erasure. It is unnecessary. And it fails to advance the very cause you claim to be championing because it alienates your possible allies.

All credit to BioWare for bringing to life a world that is rich and amazing in textures and colors of skin and the varied anatomy of the bodies wrapped in that skin. All shade to the commentators who refuse to notice that BioWare has created a world that is as multicolored as real life.