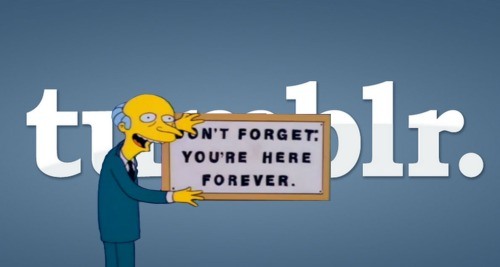 My name is Carrie McClain and my personal tumblr page celebrated it’s fifth birthday, not too long ago. Nowadays to compliment me on my tumblr is a supreme compliment (it happens often), it is a compliment on par with telling me that I have fierce eyebrows (which sadly doesn’t happen enough). In the beginning, I didn’t think much of tumblr—it was just some blog that I barely updated or looked at. As time passed I started logging in more on a whim and I started reblogging more. Then Tumblr became very important to me as it did for many others for it became an extraordinary blogging behemoth social networking site.

Founded in 2007 but launched back in 2008, by David Karp and Marco Arment, Tumblr would introduce to the world a game changer, a unique website that blogging easier and more accessible with a platform to post just about anything.  Somewhere along the way  it  became the fifth most visited site throughout the U.S. and stole much shine from Facebook by becoming more popular with the 13-25 age group.  People forget  back in 2011, Tumblr was chosen to host President Barack Obama blog and THAT WAS BIG, especially since younger people contributed greatly to his campaigns in both elections he ran in. So it’s no wonder that tumblr users are fifty times likely to go to a political rally, twice more likely to advise other folks on political happenings and current events and-gasp, 108 times more likely to be registered to vote! Holla at your girl.

What a lot of people fail to realize that Tumblr has become necessary tool for millennials in this day and age. Consider this for young social activists from those in Mexico protesting the disappearance of the 43 missing students in Iguala, Guerrero, Mexico  (#YaMeCanse) to the huge network of people in and around protesters in Ferguson, MO—this website was one of the first places they could post unbiased, uncut videos and photos of the police brutality and violence going on. Also included is (somewhat limited from what I’m told) footage and information about the Hong Kong’s “Umbrella Protests” also known as the “Umbrella Revolution”  circulating the site, which it seems at this point, 12/5/14,  seems to have possibly lost some of it’s steam with the arrest of many people and the surrender of  some of their leaders, sadly.)

Where news stations failed them, the people could post their Vines and phone pictures and tell you where to send resources and how to help. Reblogging first hand accounts, links to donate and master posts of information on this site has kept many of these movements going in one way or another. Tumblr may very well be drawing the most of the 18-35 demographic but it is not in vain as people in this age group are seemingly looking to be the ones in charge of the many protests going on in the country and around the world. And how, you ask? Social media. Tumblr being a big part of that. Social justice warriors, believe it or not are changing the world in their own way. What do most, if not all these protesting movements have in common? Young people, so many students, with smart phones and devices such as laptops with access to the internet with tumblr being a platform to share. What am I saying here? I wouldn’t be too far from the truth to say that the youth making some of the biggest impacts in these movements–looking at pictures from Hong Kong to Mexico to Brazil to Palestine to Ferguson all beyond, I see faces of young people, I hear their voices, I see myself in them.

But what else can I credit Tumblr to? I have found some many wonderful people through this site, folks I have come to cherish greatly. This is a Nerd Haven. This is a place where you can get friends for life.  There is a fandom for everyone and everything. You got a OTP  that you think no one else spazzes about?—you just might be wrong—look on tumblr. You want Master Chief gifs? Baby Dancing Groot fan art? Doctor Who fanfiction? Naruto Role Playing Accounts? Pictures of Homestuck cosplay or Nightvale tumblr themes? Shojo manga scans? Look No Further.  This is also a great place for artists to mingle and share and interact with their fans. You’ve got everything from folks who make web comics to professional comicbook writers and artists like Kevin Wada.   I’ve met some of the people who would later become members of my Black Nerd Problems family, Omar being the first.  I’ve even so far as to meet one of my tumblr friends in the next state over offline—and I still have all my organs.

There is a conversation that I’ve had repeatedly in the past and continue to have with people on nearly a daily basics: finding “safe places” online (and the brainstorming of actions we can take to maintain them.)  For me, finding safe places online as a Black woman, as a POC and as a feminist is a difficult thing to do in this day and age. In that same thought I am reminded that I stand for the type of feminism that is intersectional, nothing less. (Seriously, intersectionality or GTFO), where I want all members of the LGBTQIA community to be safe, feel safe and blog to their hearts content without fear. I want disabled people to be able to do their thing, be awesome and for (some of them) not be triggered unnecessarily by some features a website brings.  I also want all kids of color who have to go out and navigate an increasingly scary place that the world is to find some comfort and safety when they blog. There is so much I want…and I don’t think it’s too much to ask for because I’m horrified a hundred times fold by Tumblr:

Tumblr has a startling string of offenses, like not caring to address concerns like the new layout that was launched not too long ago that was/probably still is triggering to epileptic users.  While many  of these offenses created outrage ,new features routinely hit the site and updates were made to keep the ball running. But did you know about the erasure of voices where some posts tagged with #ferguson were disappearing from Tumblr?  How terribly ironic and sickening is it that Tumblr, known for it’s been usage for social change is seemingly starting to suppress it? Why has Tumblr’s staff taken such great care  to remove posts exposing personal information of KKK members exposing them for who they are online—are we all on the same page, here? Did someone miss the memo that it’s a hate group? A H-A-T-E- G-R-O-U-P-. Come on fam.

At the end of the day I’m here for the acknowledgement and the spread of information regarding Black Lives and that they matter. (Don’t come at me with that #AllLivesMatter ish–Not today, Satan.)

I’m here for a website that doesn’t derail away from that, maintains my confidence in that and a number of issues regarding marginalized groups of people. I’m here for a website that stresses that the safety of girls and women is important, that those stand up for them are important and those who dare harass them maliciously? That swift action be brought against them. I’m here for  a website for Queer people and transgender people who just wanna live their lives and support each other.  Yo, and of course those who would do them harm–the exact same brand of justice to the folks mentioned above.

I’m here for Tumblr doing right…by all of us.

This is my open letter to the staff of Tumblr:

You need to do better.  We demand better. We deserve better.

I would be remiss if I didn’t direct you to part two of the Open Letter To Tumblr’s Staff by my partner in crime and fellow tumblr deviant Omar, read that here.