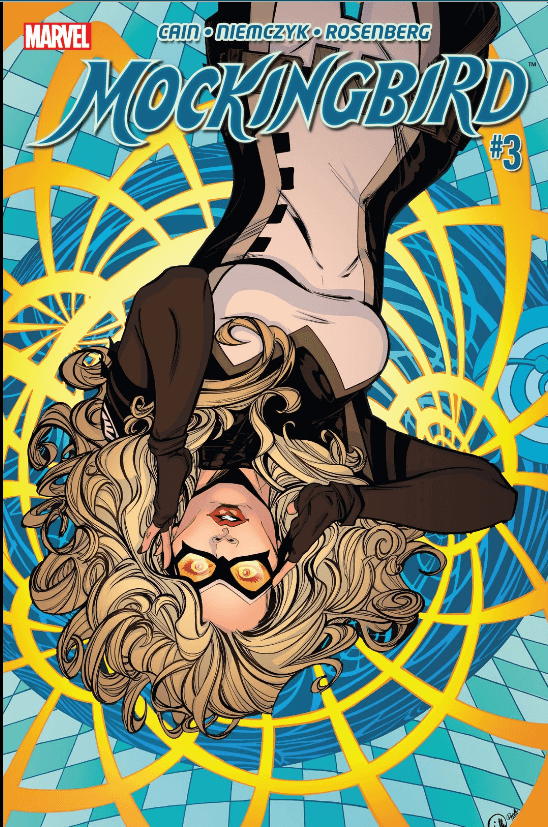 Friends and relations, I read a fair number of all-ages comics, and I can say Mockingbird is a comic book for adult women. Not that I mean it is full of violence or *gasp* nudity. It doesn’t have any more of those than most other Marvel comics. And not that I think adult men wouldn’t appreciate it — I think y’all would. What I mean is that the entire run thus far, this issue in particular, is aimed squarely at women for whom experiences of sexism and the resultant impostor syndrome are regular occurrences.

Chelsea Cain started from an intriguing first issue and has opened up Bobbi Morse, giving her a sharp wit and insight. This combined with her scientific mind makes her a brutally effective SHIELD Agent. It also makes her a capable mouthpiece for a variety of women’s angst and understandings that are popular for Marvel to reference but is still rarely centered in a comic. Cain, through Bobbi, not only centers that experience, she knocks down your defenses so you have to see it. 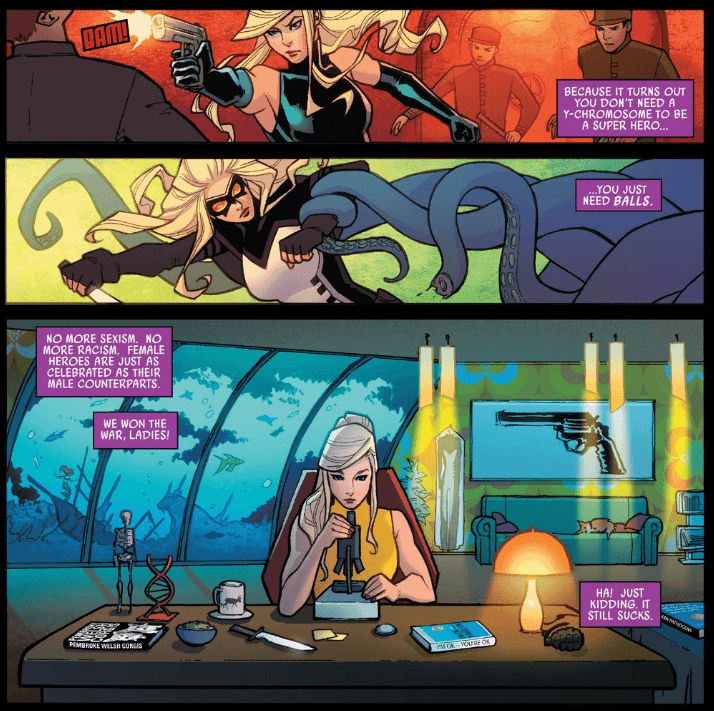 Now, this is no Bitch Planet. It isn’t radical in its politics. The cast is still completely white and the body types represented are still in the normal superhero comic vein — can’t a female character wear a size 16 in this place? It doesn’t go as far as I might like it to, but it does move the bar and of that, I approve.
As a comic for women by women, it succeeds.

Issue #3 centers Bobbi and a 12-year-old girl: Bobbi struggles with her non-superhero-ness as the girl struggles with the onset of her mutant powers. The girl poses a physical threat to her friends, even as the men in the comic connect that mutant threat to the dangers of female puberty and developing emotional adulthood. Bobbi approaches the girl not as a mutant and not as an unknowable danger, but as a girl. She does not presume to understand her, but she definitely presumes to be the best equipped person on the scene to figure things out. She’s not wrong.

[divider type=”space_thin”]
This isn’t the first comic to draw parallels between coming into one’s mutant ability and coming into one’s adulthood. But this is the first comic I know of to write this metaphor from the combined perspectives of an adult woman and the girl she used to be. The result is an extended commentary on the untapped power of young women and how they understand and harness that power with or without the support of the adults around them.

The art has come together this issue, the bright colors becoming part of the story itself. You know my love of candy-colored comics, and the artistic team brings that work.

The issue wraps up with success, but doesn’t move us any closer to solving the puzzle box of the overall plot. So we wait for next month. Rumor has it that Civil War II will impact Bobbi too. I for one look forward to it.

8 Corgis out of 10
(Even though there are no corgis in the issue. What gives?)