Social media has changed the way we look at basic communication and human interaction. Couple that with the fact that, generationally speaking, gamers devour content unfathomably fast, it was really only a matter of time before it altered our outlook on gaming as well as how gamers respond to this outlook, development-wise. “Lifestyle gaming” is becoming a term to describe games that sort of hardwire themselves into your routine. You play them regularly to keep up with the Joneses, you look for mythology surrounding the game, watch gameplay posts about it on YouTube and often form a community with other people who play the game.

Destiny, for better or worse, has tried desperately to maintain its status as a lifestyle games despite a laundry list of problems and controversy. Honestly, Destiny is the way I bonded with a number of my fellow BNP writers.

And now with Monster Hunter World, Capcom has taken its steampunk fantasy franchise to its next logical step for current gen consoles to create a uniquely insane experience that both fans of previous incarnations and newcomers looking for a lifestyle experience. The story is…well, there is a story somewhere in here. You’re a fledgling member of the “Commission”, an organization that hunts monsters great and small with large unwieldy weapons all while dressed vaguely like some cross between a Once Upon a Time cosplayer and any given member of GWAR. You are sent to join the Commission on a new continent where the ecosystem has been turned topsy turvy because of the appearance of some large apex predator that looks like Maui stole the Heart of Te Fiti again. That’s mostly all cosmetic as far as this game goes, though, since you won’t be doing much to solve these mysteries as far as I can tell. The important part is that because of all this, you’ll be sent out into wilderness to risk life and limb to hunt monsters. The cutscenes are nice to look at, though.

Speaking of aesthetics, what’s awesome about this game, you ask? Right away, it’s ridiculously gorgeous. I can only imagine what you lucky bastards playing this on PS4 Pro are experiencing because these vivid, colorful environments I witnessed on my entry level television in my bedroom were nothing short of next level. Though MHW is light on plot, stick around for the cinematics and score…kinda like we all did with Tron: Legacy. This game throws you head first into its world and as soon as you hit the ground, you’re freaking out trying to figure out where to go while the sky is falling around you. The first time you’re stalking your prey through the Ancient Forest and that ray of light comes in through the trees, you’re instantly blown away.

The combat itself is a great time that sucks you in immediately. You’re essentially playing a game that is exclusively a series of boss battles and this game just about never lets you forget it. And the most exhilarating part is that even though you hit the ground running, hunting the boss, the tables could turn at any time and the boss could end up hunting you. And if that’s not enough, you’re in the wild so the chances are always high you’re going to run across another monster, sometimes a monster you’re not equipped to fight and you’ll be forced to deal with it. Once in a while, you may get lucky enough that your prey might run into another monster and they’ll trade blows long enough for you to adjust your tactics or tend to your wounds, but don’t hold your breath. 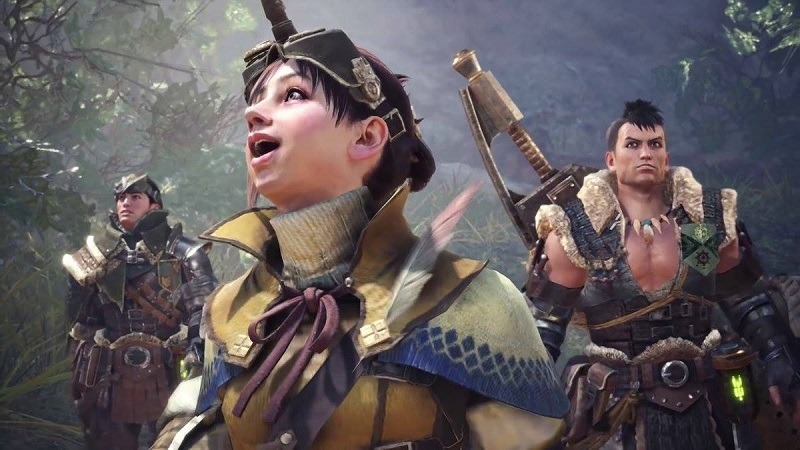 Part of the fun will almost certainly be going through the trial and error of cherry picking your weapons of choice. Trying out weapons on its own is worth days of fun. The arsenal you have to choose from are all large insane killing tools that look like they belong on the cover of a Warhammer novel, ranging from a basic sword and shield to a giant buster sword to a 50 caliber crossbow that you have to drag and sidestep through a monster fight like overpacked luggage.

The downside of this game? There are so many menus. There. Are. So. Many. Menus. Even though the tutorials are moderately efficient at getting you up to speed on all the basics, there is a learning curve at work here and the amount of menus can be overwhelming to start. I guarantee you there are a few things you’re going to have to google to figure out.

And the online stuff could use a little help. With a game like this that has these epic sprawling maps, there’s no reason you shouldn’t be able to just venture out into the wilderness, see an SOS flare (you can put out the call for help when you’ve bitten off more than you can chew with a monster), track it to point of origin and kick some ass. But no, you have find the exact monster you want to hunt via more menus. Oh and if you want to get with a squad to fight a big beast or if you want one of your friends to answer the call? You have to be in the same “online session” at the same time as opposed to when I play Destiny and can be taken to wherever my fireteam is (if they’re not full) and catch up to them. What Capcom asks of you with their online mechanics requires a lot the legwork to make sure everyone’s online and ready to go. This can be anywhere from mildly to extravagantly annoying, possibly limiting the game’s capacity for building the kind of community that lifestyle games thrive on. 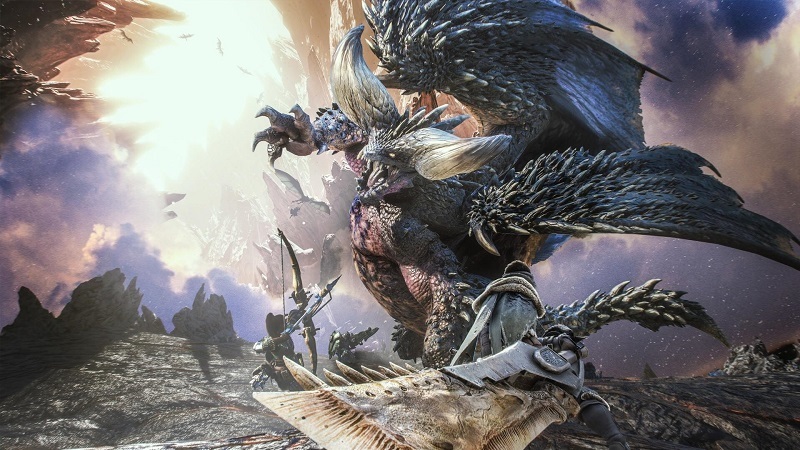 Bottom Line: Monster Hunter World does a great job of streamlining everything that makes the Monster Hunter series a great time (except the menus). Even the most inexperienced of hunters will have a good time button mashing, getting a few solid hits in. And the online needs a bit of help that could probably be upgraded easily via patches and a few updates. Aside from that, there’s more than enough content here to keep casual and hardcores occupied for hours on end. You probably won’t regret the $60 investment.