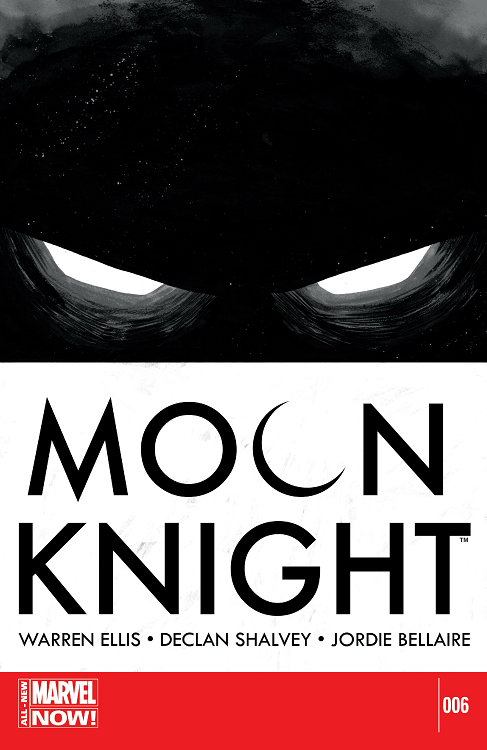 ***This is Carrie, taking over for Omar this week covering his comics reviews as he is out doing whatever slam poets do. He’ll be back to cover the next issue of Moon Knight.***

This issue starts off with the one and only Marc Spector sassing cops and one is particular isn’t happy about playing second fiddle to him. We see his sob story of a life and how inadequate he feels. He goes by the name of Ryan and starts snooping around to get more info on the fabled nutjob he knows as Moon Knight. But this guy takes it further from bribing another cop to give him evidence from cases that Moon Knight has been involved in from the evidence lockers to (falsely) impersonating a member of S.H.I.E.L.D. and going around visiting old contacts of Marc Spector…this dude is going all the way out, yo. Then it strikes him! A brilliant thought! The deeper and deeper he digs, the more he convinces himself that he could be better than Moon Knight. He could be beat him at his own game….If Ryan takes him out the game, then he can overshadow him and be the best….

Yeah, that aint what happens. AT ALL. What we get is a plan backfiring easily and an ever resilient Moon Knight, no matter how written off and distrusted he is coming to hand out a lesson. He’s alone. He’s works alone. He has no one. All he has are these streets he runs through and this costumed vigilante ways–if someone was going to bring it, they should have hit the books harder. What Ryan the naive yet obsessed cop failed to realize is that Marc Spector has nothing to lose and will continue doing what he does. If Moon knight is a badass, then this issue was him reminding a certain someone that the title sticks and that he is not easily dethroned.  Shavley handles the artwork well, from the constant run around Ryan does in the beginning of the issue to the panel s that feature the demise of his dreams of taking out his prey who alludes him.

It’s important to note that this ends the first arc of this comic: Warren Ellis and Declan Shalvey are leaving after a six issue run and passing the baton to Brain Wood and Greg Smallwood.  Hoping that the next issue with Wood and Smallwood at the helm continue to engage  those who read this comics but also bring something new to the table.