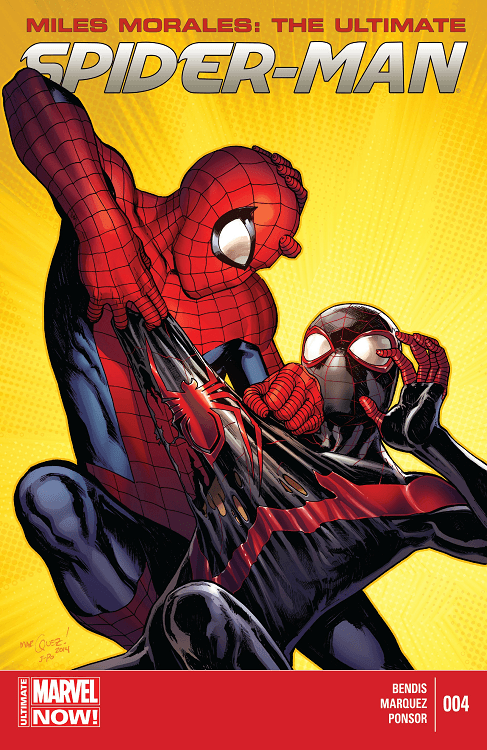 ***This is Carrie, talking over for Omar this week covering his comics reviews as he is out doing whatever slam poets do. He’ll be back to cover the next issue of Miles Morales.***

Here at Black Nerd Problems, I think we’re starting to have a thing with nicknames and kid superheroes. For Kamala Khan aka Ms Marvel, whom we all adore? She’s “The Baby”. Most of us here that are reading her series almost feeling like we’re watching her first baby steps into her super hero boots, or wedged boots, whatever.

With Miles Morales? I’ve personally given him the nickname, “The Kid” which hasn’t caught on yet with the rest of the BNP crew, but that’s fine cause there’s plenty of time for it to stick. Now this isn’t Miles’ first time at the rodeo. I mean, the Marvel Universe has watched him grow up and it’s been quite a ride: from the manifestation of his powers, the death of Peter Parker, picking up the reigns of Spider-Man for a city that needed him, the death of his mother….the departure of his father…

I NEED A HUG. And so does Miles. So Does Miles Morales.

The kid can’t catch a break. YES, “THE KID” CAN NOT CATCH ONE.

This issue picks up with the love of Miles Morales’ life: the lovely Kate Bishop running home after Miles has confessed to her his secret–that he, is Spider-Man….which didn’t go well. She confides in her sister who tells her the REALEST of deals: break up with him cause it will be better for both of you. He’ll keep his head and you’ll keep yours. Plus, as big sis reminds her: SUPER HEROES NORMALLY DON’T HAVE A LONG LIFE EXPECTANCY.

Immediately after that, Miles finds himself face to face with the Green Goblin, whom everyone thought was dead…at the exact same spot where he killed Peter Parker…forreal? And the kid is dodging and evading him and dude has the audacity, the balls to say this: Then you have Miles who starts battling this Hulked Out Version of the Green Goblin and he’s on fire. Nah, I ain’t talking about that Alicia Keys, song…He’s actually on fire.

This issue ends with Miles getting an assist by someone special by means of a glorious cliff hanger. THE ACTION, THE ANGST…IT’S ALL HERE.  Miles still has unsolved drama with Kate and we’ll just have to wait till next issue to sort through our feels and figure out whats coming next for “The Kid” and this Peter Parker Clone or whatever he is and what purpose he serves. Here’s to clinging to the edge of my seat throwing up a toast, sending “The Kid” some luck.