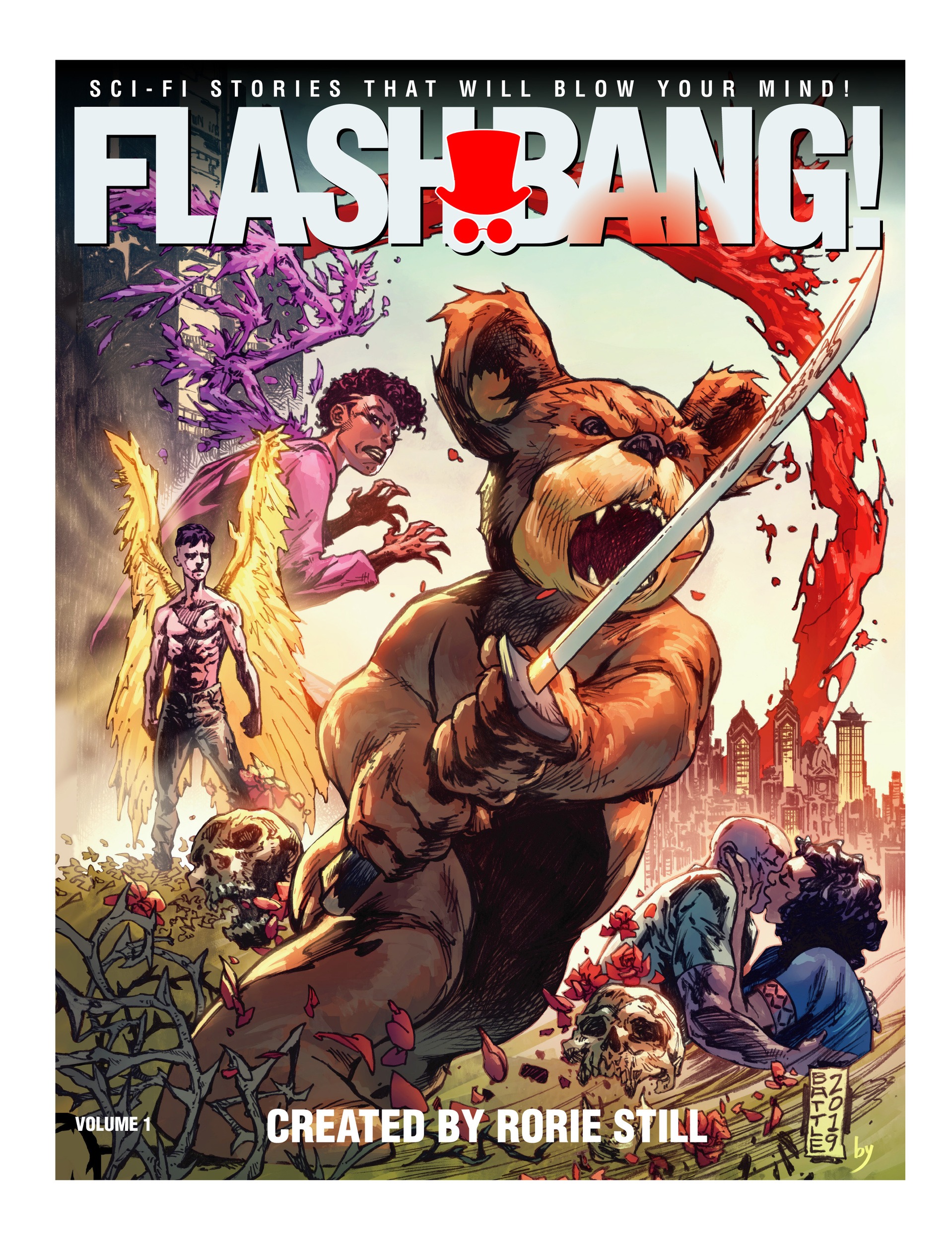 About a year ago, I interviewed Rorie Still about her self-published prose and poetry book Flashbang: Sci-Fi Stories That Will Blow Your Mind, an Afrofuturist collection of short stories. Now she’s back with a graphic novel adaptation of that book. We talked a bit about adapting her own work, working with a lot of moving parts, and the rewards of owning your work.

Black Nerd Problems: For those that haven’t read your first book, what is Flashbang all about?

Rorie Still: The Afrofuturist short story collection is about an unseen but heard benevolent trickster Goddess who is giving wayward blessings to people in an alternate Philadelphia.

BNP: What’s the relation to your first book which was prose, and this new one that is a graphic novel?

BNP: What are some short synopses for a few of the stories within Flashbang?

RS:
Blowup: A young woman’s chance and intimate encounter with her favorite celebrity goes terribly wrong and highly bizarre, becoming a web from which she cannot escape. 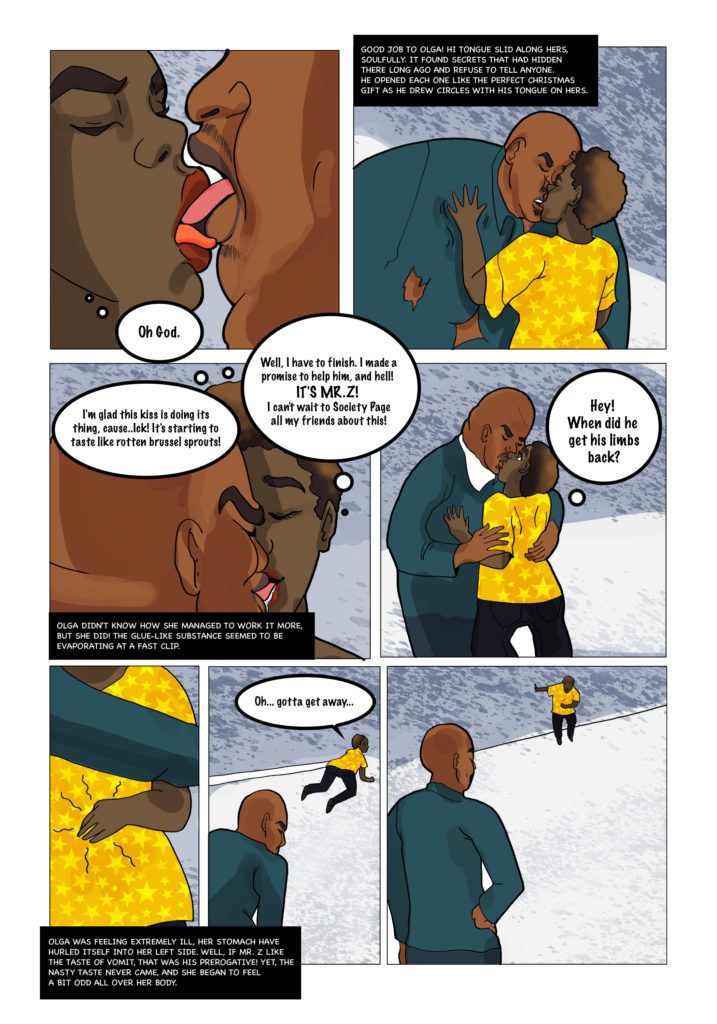 My So-Called Power: A teenage boy, named Jared, bullied both at home and at school, must piece together how to use his new and chaotic powers to make a difference in the world and in his own life. 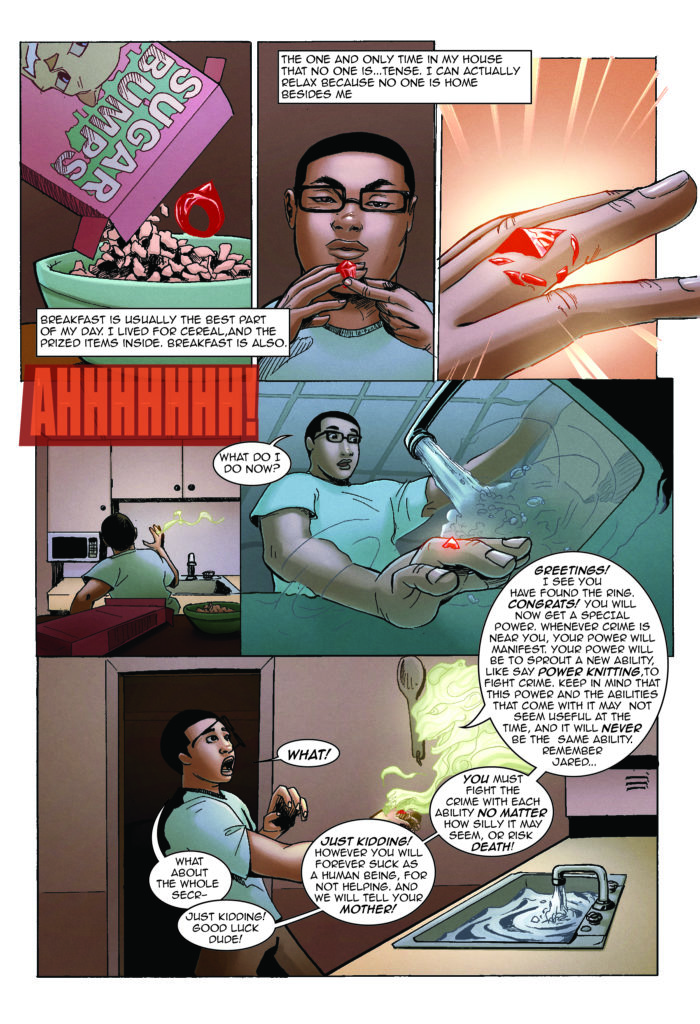 Taking Wing: A teenage girl, must find the courage to face her heroine, a public guardian angel doing bad to do good! 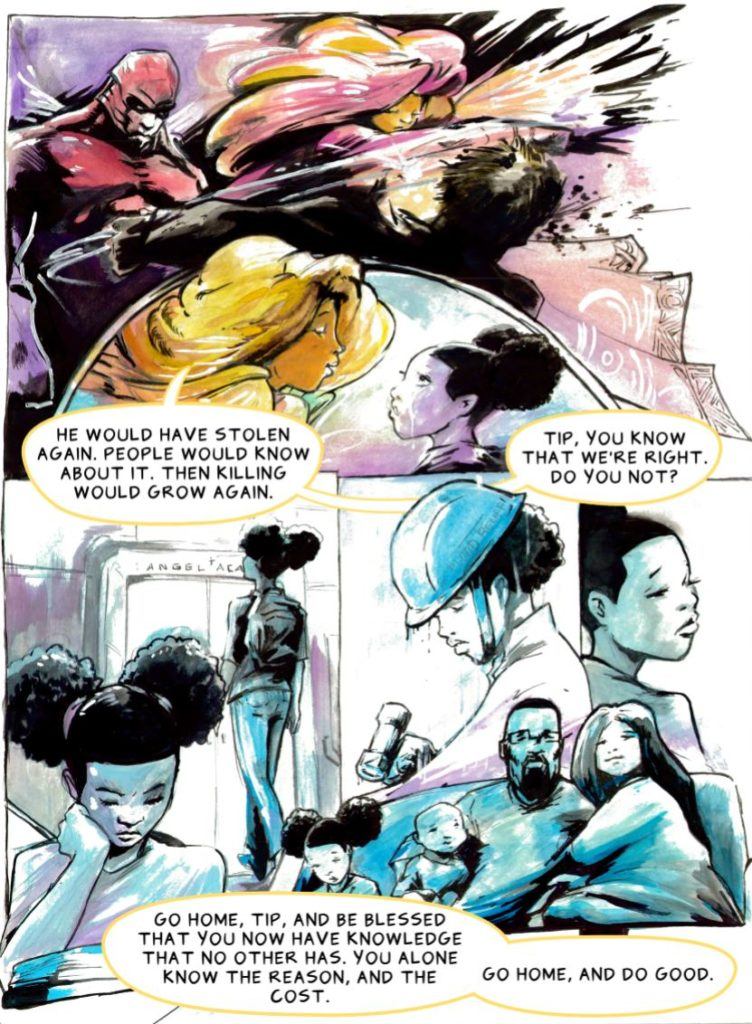 Teddy Ninja: A young, Black ninja fights an evil samurai nightly in Philadelphia, PA. He desperately tries to bring justice to his city, only to slam into fate and get turned into his enemy’s play thing! 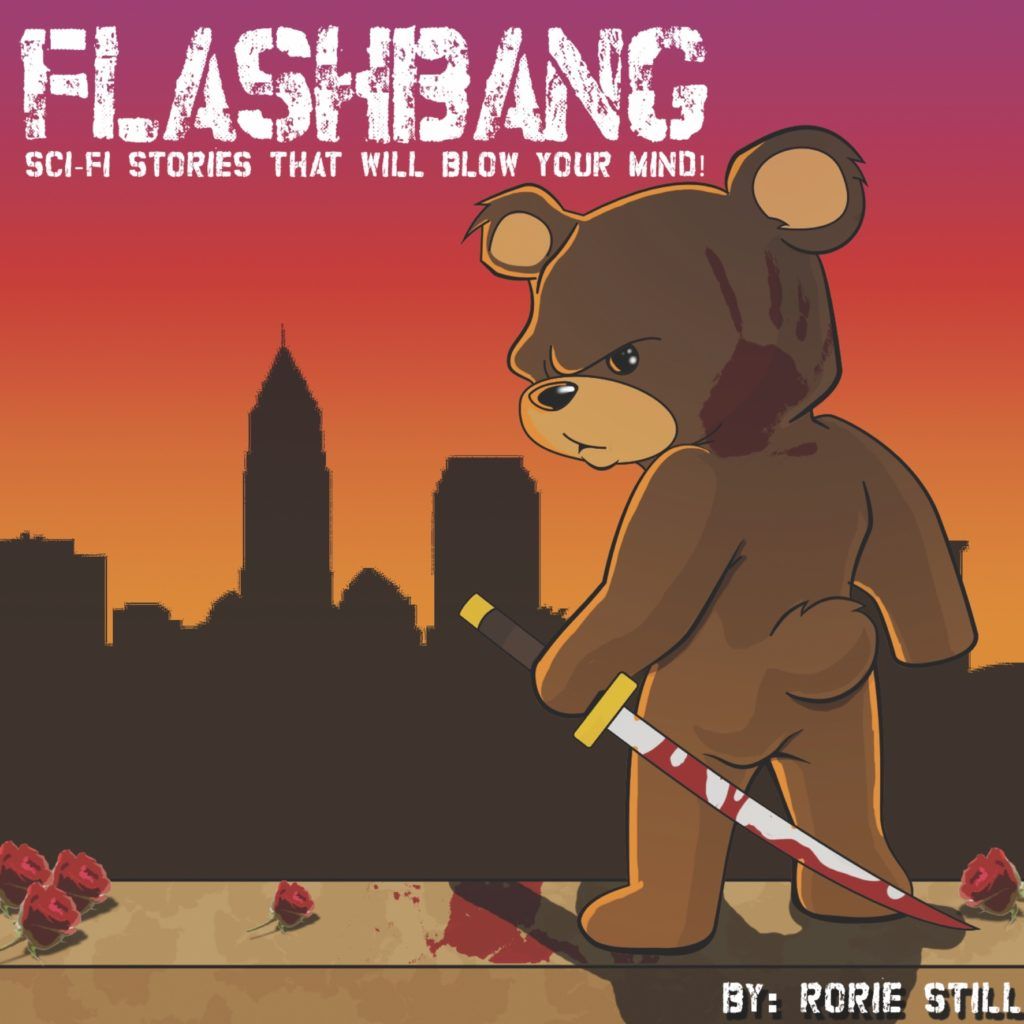 BNP: How was the adaptation process for you? How did you go about taking what was prose and poetry and formatting it as a script for an artist?

RS: The conversion process from book to script was a very interesting one. When I was first writing the script, I wrote it as a film script until I started to review actual comic book scripts, which were sent to me by some of the artists on the project. I would say it wasn’t as hard as it could have been had I not written the first addition of Flashbang or actually started to write screenplays. In some ways, it was like re-writing the book, and in some cases, like for much of the dialogue, I used copy and paste. Then, some other parts required elaborating on the present material, especially with a story like Hatched where the character really isn’t saying anything out aloud but is mostly thinking to himself. That definitely required me to be more descriptive, but since the material had already been written, the story was already in my head so the mental visuals, with a little bit of struggle, easily poured out onto the page.

BNP: What made you want to adapt the original book into a graphic collection? Was it to reach a wider audience or to challenge yourself?

BNP: Aside from adapting, what’s been the hardest part about doing this book in a graphic form? Maybe something you didn’t see initially but ended up being difficult.

RS: The hardest part of doing this book is the coordination of just so many people on all the different stories. Another difficult part that I wished I had seen earlier was realizing that certain processes should’ve come before other processes. Like for instance, I should have sketched out the panels with the script to see if it fit instead of doing the lettering as one of the last steps and that was kind of difficult to work around at the end, even though it did get done.

BNP: What challenges do you face when self-publishing two books of this magnitude? And on the flip side, what is most rewarding about doing it all yourself?

RS: Yes, all of this definitely has been a self-published endeavor. Some of the challenges that I faced with self-publishing was making sure that there are enough finances to do so. This is where awards and grants like the ECBACC (East Coast Black Age of Comics Convention) Pitch Room Award and the Leeway Art and Change Grant (2018) really came in handy. Another challenge was just being able to figure out what type of marketing that I wanted to use and just making sure that marketing was consistent. I still struggle with that a little bit!

On the flipside, some of the rewards are having absolute control over how I present my art. Also, the direct-to-public-interactions that I get to have with my material. I’m very much a people person, and self-publishing allows me to talk to more people.

BNP: Tell me a little bit about the people you worked on this book with. From the artists to the colorists and the letterers and editors.

RS: The major line of artists for the graphic novel were: Eric Battle (Front Cover, Hatched, and Bird Gone Bust), Trenita Finney (Blow-Up and My So-Called Power), Phoe-nix Nebula (Teddy Ninja, Taking Wing, and My So-Called Power), and Kamau Mshale (My So-Called Power). Also, there is Rory Yates (Beginning and Endings). There was also Shawn Alleyne, whose work can be seen throughout the posters (Hatched, Bird Gone Bust, Taking Wing, and Birds of a Feather), Penelope Flynn (Twist-A-Tale), and Kelvin Otu (Birds of a Feather) whose work is in the Coming Attractions. Lastly, there was Blairsuleen’s incredible work on the back cover.

All of the dynamic artists have such incredible and distinct styles. I love Eric, Blairsuleen’s, and Shawn’s realism. I especially am in love with how Eric and Shawn both draw wings. I am overjoyed with what Eric did to take Teddy to the next level with the cover art. I love the manga style that was present in the work of both Trenita and Kelvin. Penelope blew me away with her Poser art that makes everyone look like real people. Last, but not least, I love the classic comic look that Kamau gave to my characters in My So-Called Power.

The separate colorists were: Bryan Valenza & Ejiwa “Edge” Ebene. Trenita, Phoenix, and Blairsuleen did their own coloring on the back cover and their stories.

Bryan’s work on the front cover, as well as on Hatched and Bird Gone Bust, gives all these works of art a certain glow about them. Ejiwa’s coloring gave each scene a perfect mood. Phoenix’s coloring of his stories give them a raw intensity that really makes you empathize with the time, place, and people. Trenita’s coloring really makes the characters’ interactions, with a cast of two, really stand out to the audience. I especially like the characters warm brown Afro tones in the manga style.

I have to especially give credits to the letterers of the book: Trenita, Adrian Paul, Kamau, and Rachel Kalner. Both Rachel (Taking Wing) and Adrian (Hatched, Bird Gone Bust, and Teddy Ninja) did a great job in their word placement, especially considering it was a bit of reverse engineering. Trenita and Kamau did a really good job as adding the lettering as another spirit of their stories.

BNP: What was it like working with so many artists? Were these all artists you already knew? Are they local? Or did you have to do some digging on the internet to find just what you were looking for?

RS: In working with so many different artists, the process felt like a monumental task at times. Thankfully, most of the artists I did know beforehand. Most of them are Philly-based, and almost all of them had worked on some projects for me before the graphic novel.

BNP: Speak to the importance of Philadelphia both within your stories, and with the artists that you’re working with.

RS: Philadelphia is an important element within the graphic novel’s stories in the fact that it is the background and the spirit of each of these tales. Philly, I feel, is that scrappy sibling that nobody pays enough attention to sometimes, only to eventually be the champion. I definitely want people to get that Philly feeling when they read the stories, no matter where the characters might be on their “Hero’s Journey.” I want you to smell and taste the concentration of cheesecake, Tasty cake, and water ice as you watch wings spread. I want you to feel the curvy sidewalk beneath your feet and at the same time see the film-worthy skyscrapers that will be the playground for some of the book’s battles. In this condensed city of love and affection, I want the audience to feel a need to join in the spirited adventures within the book and an ever-shifting “other “Philly.

Concerning the artists, Philadelphia was my network that connected me with many of the incredible artists who star in this graphic novel.

BNP: When can people get their hands on the book?

RS: The comic book is already complete and in print! Currently, people can reach out to me via Instagram @rorstll or through email ([email protected]). However, a little later down the road, I intend to have the graphic novel available online, in stores, and in libraries.