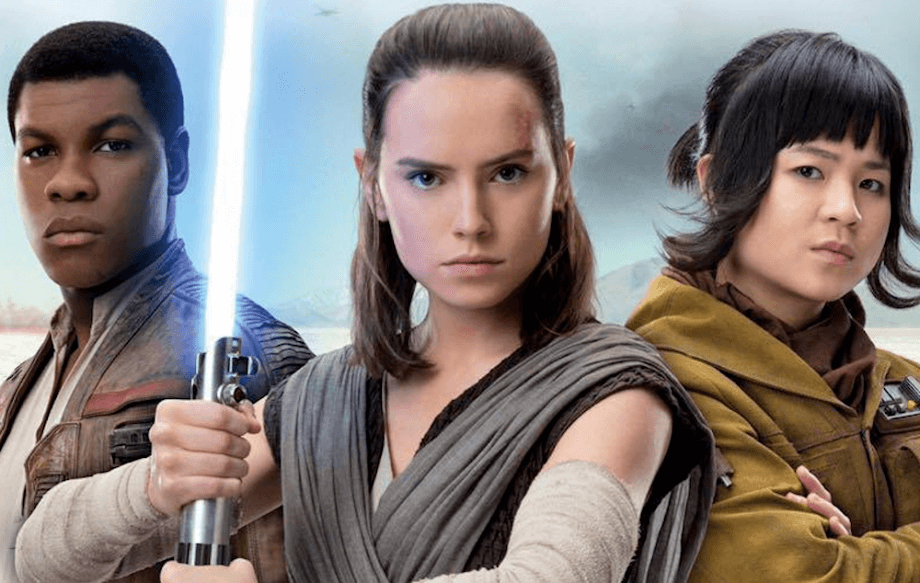 It’s one of the most controversial questions of our time: How do you rank the Star Wars movies? And now that we’ve been gifted with the official return of Luke Skywalker and the release of Star Wars: The Last Jedi, I figured it was about time to revisit my ranking of the series since 2015’s The Force Awakens. So without further ado, here’s my absolutely definitive, 100% subjective, probably controversial ranking of all eight Star Wars films, from worst to best. 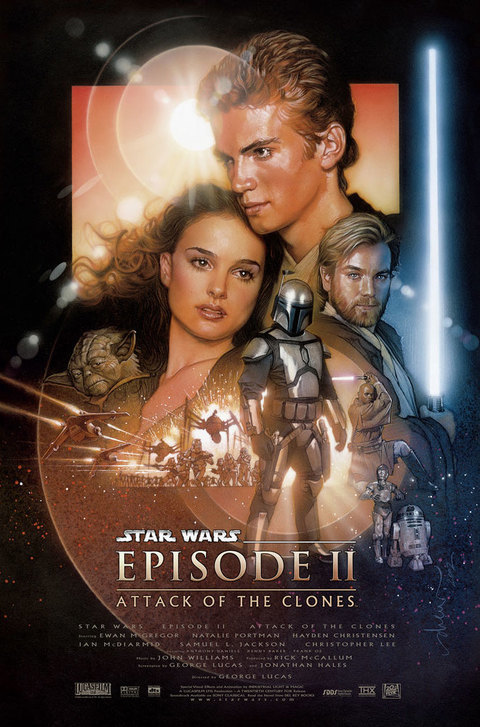 Let’s start with the (few) good parts of this one: Obi-Wan Kenobi (who, like his co-star Natalie Portman, and very unlike his other co-star Hayden Christensen, can actually act and is charming and entertaining to watch) donning his Sherlock hat, wandering around the universe trying to figure out what the deal is with the clone army; the production of the clone army, which will ultimately become the stormtroopers; Anakin Skywalker’s wrathful slaughter of the Tusken Raiders—the perfect lead-in to his fall in the subsequent film; an army of jedi, including Samuel Jackson’s Mace Windu, kicking ass; and Yoda finally showing off his moves against Christopher Lee’s top-shelf baddie Count Dooku. Honestly, this movie isn’t that bad. It’s just that the bad parts feel so unforgivable that it’s tough to see beyond them.

Points deducted for: The complicated trade happenings; CGI plants, CGI beasts, CGI landscapes, CGI Yoda—hey, I wonder what else we can make CGI; romantic dialogue so flat and cliched and awkward that no one who saw this movie in theaters got laid for about six months.

This one’s pretty close to Attack of the Clones in my ranking, and it certainly came under a lot of fire simply because fans had waited for so long for the new Star Wars movies, so expectations were very high. This movie, like many of the others, has a serious pacing problem, and in many instances the plot is just plain bizarre. Think about it: two grown men—jedis, actually—get stuck on a planet with no money and no way to get to where they need to go, so they bet on a young slave boy to win a pod race so they can leave? Oh, and meanwhile there’s more trade stuff and politics happening. And Padmé, who’s probably supposed to be around fourteen years old, is secretly the queen of Naboo and knows all about government policies and military tactics. And she gets poorly hit on by aforementioned young slave boy, who is eight years old and teeming with the magical miniature creatures that we’re now going to say constitute the Force. It’s ridiculous, but this one still gets points for Qui-Gon Jinn and that final fight scene between him, Darth Maul and Obi-Wan Kenobi. Seriously, this movie’s points are mainly for the awesomeness of Darth Maul. 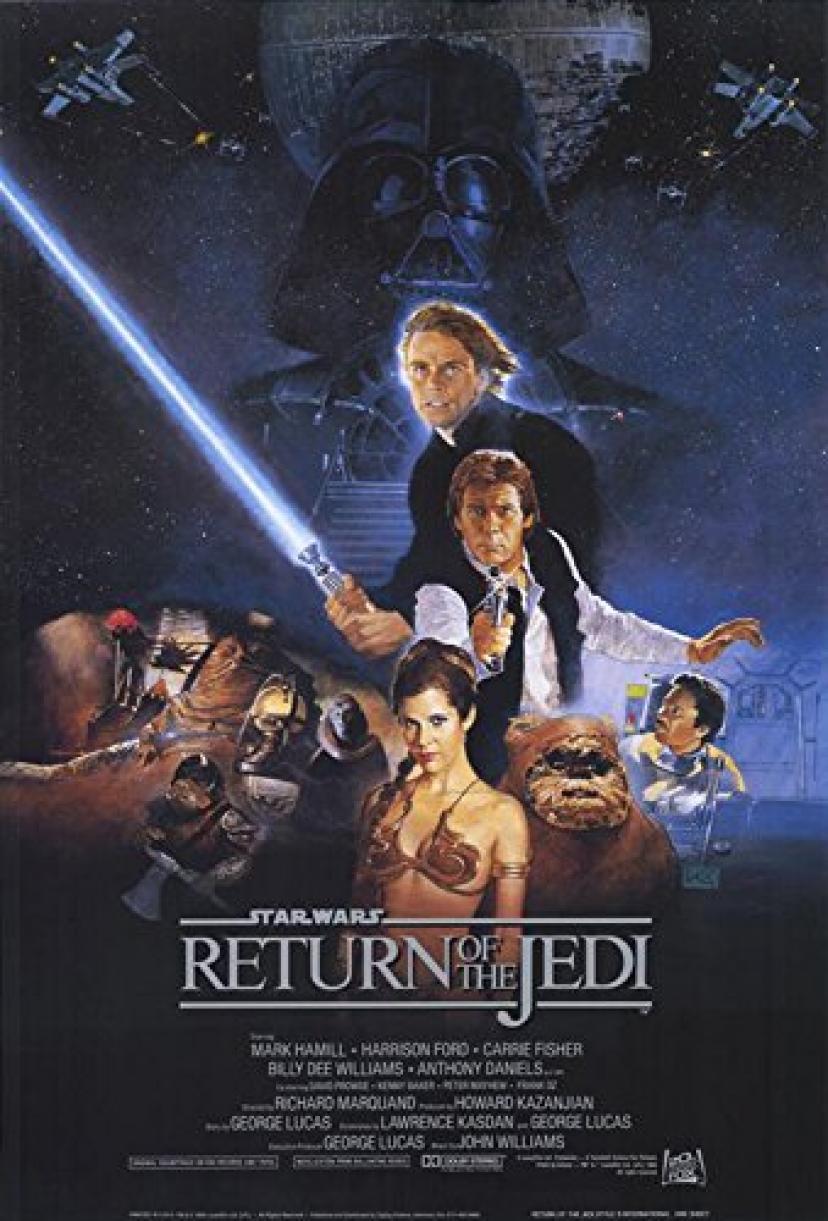 This movie held a lot of appeal to me when I was a kid—the heroes narrowly escaping the jaws of the Sarlacc; Luke showing up in his sleek, all-black jedi outfit—a far cry from the confused, whining Luke from the beginning of A New Hope; the closure of Darth Vader’s return to the good side as he saves Luke at the last minute during his fight with Palpatine. Still, the majority of the film—and all of the main action—takes place on Endor. Unfortunately, that’s the home of the useless, precocious teddy bears called Ewoks. I don’t care how cute you think Ewoks are; watching an hour of walking, talking teddy bears throwing rocks and twigs at an army of armed soldiers isn’t my idea of great filmmaking. The final victory feels way too precious, and, overall, the quality of story in this one is too unbalanced for this episode to rank higher on the list. 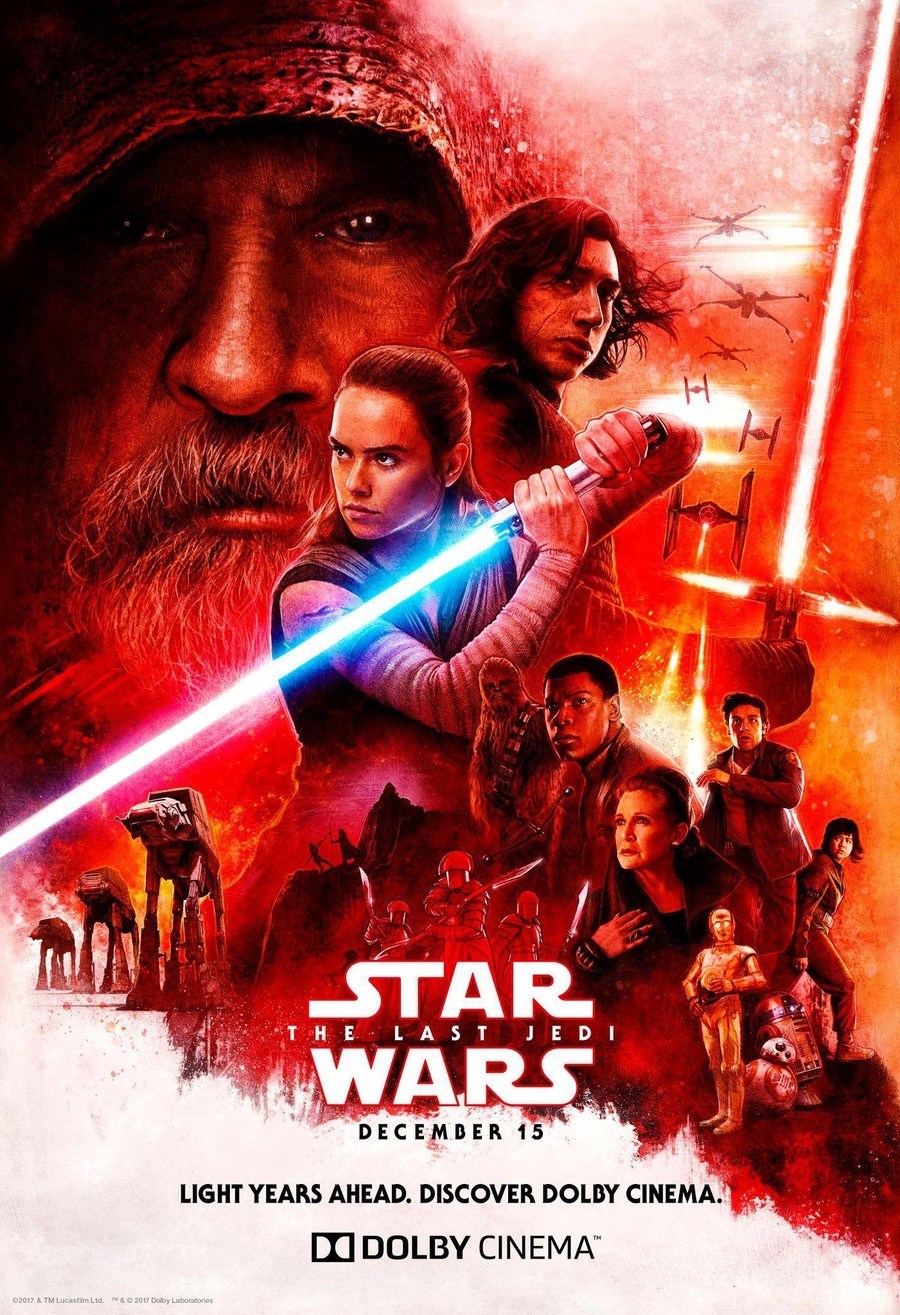 I wanted to enjoy this one more; I really did. And it’s not like there wasn’t plenty to love: Poe Dameron figuring out what it means to be a leader; Carrie Fisher, as Leia, doing her thing; Adam Driver presenting a subtle, emotionally fraught Kylo Ren; a crotchety Luke Skywalker; the high-stakes, growing connection between Kylo Ren and Rey; and Rey rising to the occasion as the great jedi we know she’ll become. But this two-and-a-half-hour movie takes on way too much; it overstuffs itself with action and parallel storylines that detract from rather than add to the story. Like The Force Awakens, The Last Jedi draws strongly from its analogous film from the original series, The Empire Strikes Back. But those parts of the film feel derivative, while the new parts feel unnecessary.

Points deducted for: Unnecessary narrative detours; Leia magically Force-floating through space; the quick, shallow bit of preaching the film does about class and status while Rose and Finn visit the space casino; the nonsensical battle logic of the First Order and the Resistance, the aim of which seems to be to drag out their confrontations rather than actually end them; the anticlimactic ending of Snoke, who was unimpressive to begin with. 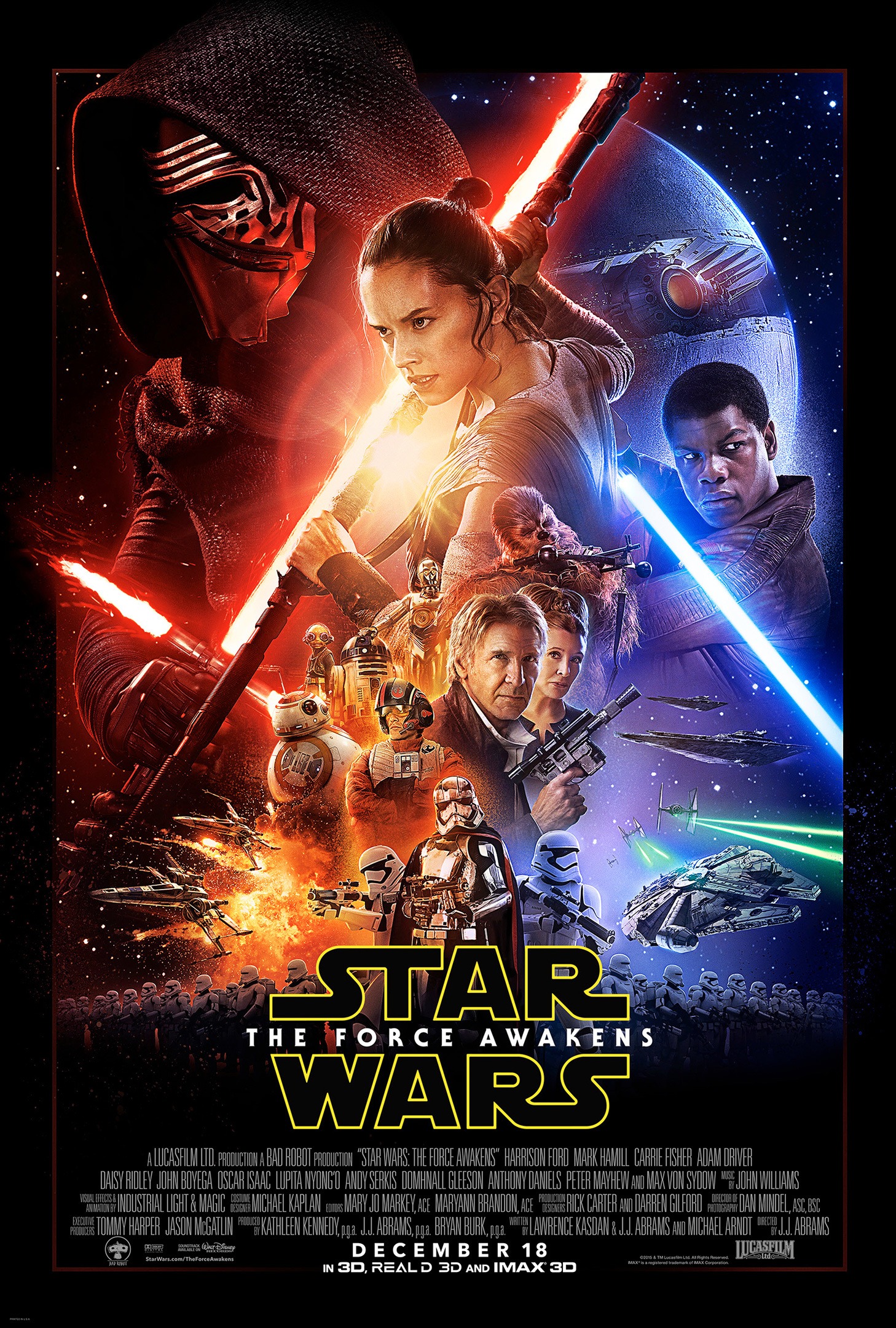 There are so many good parts of this movie: the cast, the jokes, the drama, the fights, etc. And of course the dialogue and effects are a thousand times better than the horrors we’ve been exposed to in the past. But as good as this movie was, there were still some problems with pacing and unanswered questions, among other things. If you haven’t already, check out my full review for the whole story.

I know, I know: I dared to include one of the prequels near the top of the list. Furthermore, I named one of the prequels a rank higher than the new movie. Just hear me out. Part of the reason that Revenge of the Sith is in my top three is simply a function of logistics.

The original movies were about Luke Skywalker’s journey and his relationship to his father and the Force. Darth Vader is the shadow in the background, who we get to know not just as the evil, mustache-twirling (OK, so he doesn’t have a mustache, but if he did, let’s pretend he’d twirl it) villain but also as part of Luke’s character. When we get into the prequels, we’re going into them as character studies, as observations of how Anakin Skywalker became Darth Vader. So it follows that Anakin’s change over to the Dark Side would be the crux of the series. It’s the moment that shifts the entire momentum of the series and literally changes the universe we’ve come to know.

That being said, I had no faith in Hayden Christensen’s acting abilities; after all, we had already suffered through the debacle that was his acting in Attack of the Clones. But Christensen fared better with the emo-boy acting. The series set him up for his shift to the Dark Side from the beginning, so it all seemed believable up until the last moment, when Anakin’s a little too quick to bow down in allegiance to Palpatine. Still, Anakin’s descent into madness, supported by his irrational fears and anger and dangerously minimalistic view of the world, feels believable. The scene where he kills the children in the Jedi Temple? Deliciously dark and tragic. But there are plenty of other great moments in this one as well: the death of Mace Windu; the fight between Yoda and Palpatine; clones acting on the infamous Order 66, in which practically all of the jedi are killed; the final fight between Obi-Wan and Anakin, full of flames and tears and dismemberment—seriously, how can it get any better?

Points deducted for: The bad dialogue Natalie Portman had to suffer through; Padmé, who was perfectly healthy, conveniently “losing the will to live” during childbirth, even though we all know that in The Return of the Jedi, Leia says she remembers her mother; Anakin, after getting teched-out and donning his Darth Vader helmet for the first time, staggering forward and dropping to his knees in sorrow like a bro whose team just lost the Superbowl. 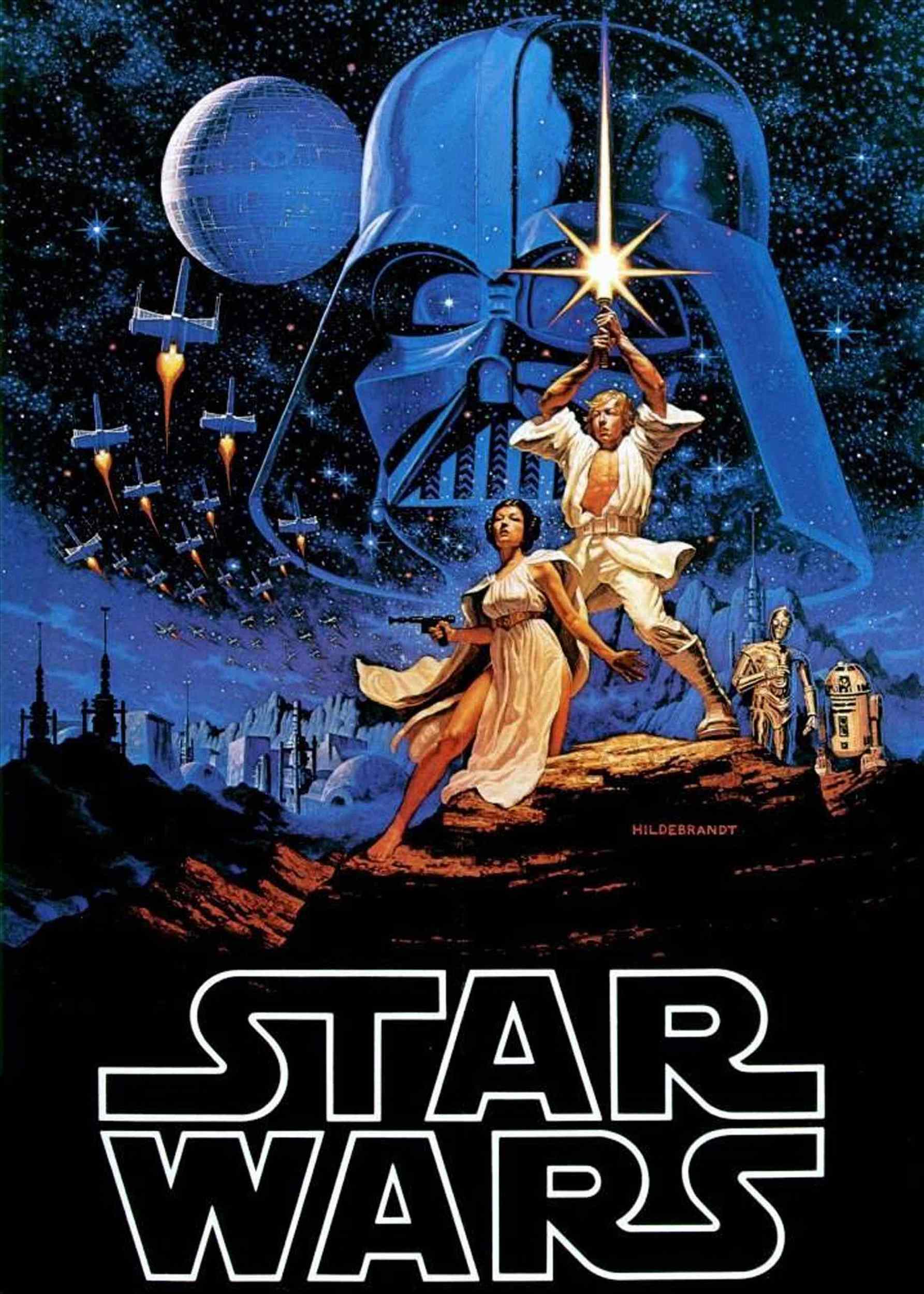 I know a big part of my ranking A New Hope so highly simply has to do with nostalgia. It was the very first movie, our introduction into the world of the Force and the Empire and spaceships and droids. But if I’m going to try and be as objective as I can, I still have to say that there are a lot of great parts in this movie. The pacing is off again, as in several of the other movies. (Last time I watched this one, I wondered how Luke is so oddly relaxed about his family being murdered; he has a moment of looking forlorn, but then just runs off on an adventure with Obi-Wan like it’s no big deal.) Still, there’s Luke’s introduction to the Force; our introduction to Han Solo and Chewbacca; our introduction to Leia (with plenty of great, snappy exchanges between her and Han); their adventures on the Death Star, including the famous garbage chute scene; and Luke’s magical, implausible victory in blasting the Death Star.

Points deducted for: A whiny Luke; weird pacing; a victory that occurs because, for some reason, the Death Star is built so that one blast can destroy the whole thing; also, Luke, despite not having had much training with the Force, magically saves the day because the opening he needs to shoot into is about the size of a womp rat, which he’s already used to killing—say what? 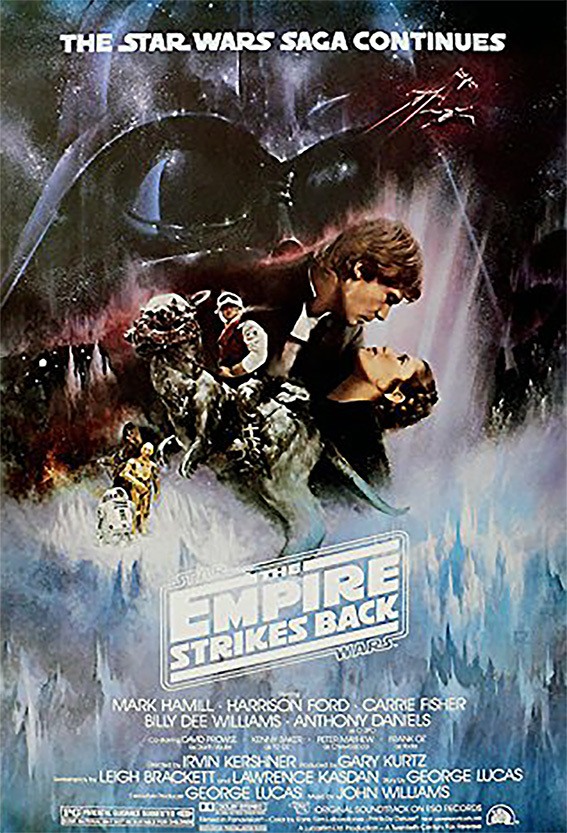 That’s it. You just can’t beat The Empire Strikes Back. This movie has everything: Han playing the hero again by saving Luke on Hoth; Luke using the Force to beat a yeti-like wampa; bounty hunters; betrayal; torture; traps; jedi training; the most convincing bit of romantic dialogue we’ve ever gotten in this series (“I love you.” “I know.”); a tragic lightsaber fight; and one of the biggest reveals of movie history: “Luke, I am your father.” And let me just take this moment to say that Luke’s distressed wail at the moment of revelation is much more convincing and satisfying than Anakin’s in Revenge of the Sith. The Empire Strikes Back is simply iconic in a way that cannot be replicated; when Star Wars is quoted or referenced or parodied in the media, or in everyday life, how much of it comes from this movie? It’s with good reason. The scope of this movie is more adventurous than in A New Hope, and the characters begin to really come into their own. There are problems with this one as well—such as the occasional awkward transitions from one plot point to another—but The Empire Strikes Back undoubtedly stands taller than the rest.