Season 5 / Episode 8, A Friend of the Family /Starz

Power decided to skip airing episode 8 last Sunday and drop this long awaited bomb on us now. If you saw A Friend of the Family this week you already know it’s about to go down!

We jump into this one with Power’s constant theme of every dam character possible stay schemin. We find Tasha, Angela and Ghost, the R rated Three’s Company, planning to pin Dre for the murder of Officer Raymond Jones.

Meanwhile, Haters in The 1st Degree are busy doing the Birdman hand rub with all the plans they got. Tamieka ‘Maxine Waters Swag’ sends Blanca to chase down Silver, reignites their plotting on Proctor and keeps things quiet around Angela.

Dre and 2-Bit continue to have tension. Cristobal shows up dressed to the 9s resulting in 7th grade jokes by Thing 1 and Thing 2. Dre informs Cristobal to he’ll be calling the boss Mr. Coleman when they go meet about the club expansions. The Dre conspirators list has another vacancy and it’s looking like Cristobal would fit nicely there.

The 3 Headed Queens Dragon has reunited again and surprise surprise, Tommy mad he wasn’t told about plan to pop Diego Jimenez full of lead. Kanan bounces mad quick when Tariq hits him up, then Ghost tells Tommy they’re gonna frame Dre for the murder, but they gotta find a way to link him to officer Ray Ray. Ghost sees Jason texting Tommy and wonders why he’s still alive.

Mak and Saxe, the max trash tag team team press Proctor as requested. They show him a picture of the murdered security guard (RIP Charlie Murphy) and claim they know James St. Patrick killed him the night before he got out of jail. They even go so far as to claim they have a witness. You can just feel Proctor’s shook levels rising.

Kanan puts Tariq onto the drug game. He’s gonna start moving Xanax to his young opioid abusing generation and much to his surprise, hit Kanan off with his 11K share. That boy wanna be a gangsta so much and ain’t got a clue how to move in them streets. Kanan tells him he has to set up a system to hide the money and whatnot. Somehow someway, you know this is about to end up all bad.

Kanan let’s Tariq tag along to his sit down with the Italians. He tells Vincent that Tommy is about to get deaded and that he’s the man who can move his weight now. Tariq has the best scene of the year when he whips out some actual knowledge. Vincent asks his boy if he can trust Kanan in Italian and Tariq answers in the same tongue. Vincent tells Kanan he understands why he brought the kid along now and it appears to be a blossoming relationship. You see Tariq’s face when he heard Kanan was gonna flip on Tommy tho?!? This kid is finally doing something worth while.

Tariq gets dropped off at the crib, the only place with worse security than S.T.A.R. Labs. Tasha and Angela are waiting and try to get info from the wannabe hustler that will help clear his name. Of course, he goes right back to being a little shit and comes at mom dukes for working with the woman who blew up their family. Tariq shows his true colors when they try to get him to admit Kanan killed his cousin Jukebox.

Tasha wants to frame him for the murder, not Dre and tells Tariq to pick Kanan or her going to jail. The Kananized son tells her to find another way. Later, Ghost tells Tasha they finally found some footage of Dre and Ray Ray together but Tasha tries to put thoughts in his head about framing someone else, with a lower profile. She suggests maybe, possibly, if there’s a chance, if he thinks its doable, kindaaaa would like it to be Kanan. Ghost shuts her down swiftly and and says “IT’S DRE” and storms off.

Yo Keisha really went to go meet Tommy’s dad and stop mom b. She really feeling his loose ass. They have a beautifully weird dinner that includes Tommy praising Connie for the ambulance business idea, Connie responding in code, Tommy telling pops that he aint afraid to keep it a hunnit with his girl, and the always welcome questioning of Keisha’s loyalty in the face of intense interrogation.

They ease up after she hits them with the rise or die receipts! This aint her first rodeo. They was bout to go home and make hella passionate passionate, until Keisha gets served a subpoena. She immediately thinks that Tommy came back into her life to get her to corroborate Tasha and Tariq’s alibi. Tommy claims this is the last thing she’ll have to do then they “ain’t fuckin with Tasha or Ghost no more”.

Mak pops up on Angela and basically tells him he aint shit. She already knows they’re going after Tommy and needs some insider info if, ya know, he’s still interested in that cushy corner office DC job. He tells her they have a confidential informant but doesn’t reveal that it’s Tony Teresi aka Tommy’s dad.

Kanan tells Tommy that Ghost and Dre must’ve made a deal to kill their targets and it all hits Tommy like a sack of bricks. Tommy updates Ghost on Keisha’s subpoena, but Ghost got a plan. They’re going to plant Diego’s head and frame Dre for his assassination, and plant the gun to get him for Ray Ray too. James is at Truth warning Tate to stay away from Dre. A part of his grand plan is to paint Andre Coleman as a drug dealer who peddled narcotics out of his club while James was in jail. Tate’s fucks given levels nary went up 1% until Ghost started dropping the whole “bringing you to the top with me” part of the convo.

The Son I Never Had

Ghost and Tariq have a grown ass convo about one of Ghost’s murders (nbd), plans to frame Kanan or Dre and having to be a father and taking the rap of the framing goes sideways. It’s real hood cute. Tariq immediately runs to tell Kanan he’s gonna pin the murder on Dre. They head out to see the EyeTalians and then Kanan has big plans for the kid.

Kanan and Tariq walk down the street talking shit about Ghost, then Kanan strong arms him into slangin some drugs out in them streets as some sort of a test. Tariq comes back all high and mighty with some fake ass bills mixed in with the real Jacksons. They see the kids who caught him slipping and Tariq runs up on them, chrome in hand. They piss themselves, drop the drugs and run. Kanan and Tariq bond, discuss Kanan killing his actual son Sean and Tariq being the son he always wanted.

Proctor pops up at Truth asking too many questions about the murdered guard. Ghost is suspicious, obviously, and follows up with a question about any potential collateral damage if he were to take the rap for something he didn’t do. Proctor wants in on the details and Ghost hits him with the most suss side eye in the game! Then deads the budding snitch.

Tasha asks her best friend Keisha to provide one more alibi, prompting quite the rise in tension! This isn’t just stretching the truth and saying Tasha and Tariq were at the penthouse longer than they actually we’re. This is grade A grand jury send that ass to jail perjury! Keish hits her with the receipts on Tasha’s countless grimy requests and abuse of power over the years. We’re left wondering how ride or die she really is for her day 1 homie.

Ghost reminds Dre that Diego is dead and Jason isn’t, so his protege owes him a body. The audacity of the young upstart who flexes his upgraded position and boasts how much Alicia Jimenez needs him now. Ghost immediately tells Tommy it’s time to cancel Christmas on that boy once and for all!!

In the most predictable move in recent Power history, it turns out Proctor indeed still has the incriminating laptop as insurance. He’s got a recording that can put both Tommy and Ghost away for good. As fellow Entourage alumni listens, Proctor drops bars about being the last one on their fucks given list. It’s bars, but he’s also descending into supreme snitch territory. Aaaaannndd just like that he’s back kickin it with The Legion of Haters, not outright snitchin but definitely giving them all the ammo they need to go after Angela and the Ghost crew.

In a scene long overdue Mr. Stay Schemin finally gets what he deserves. Kanan and Tariq are pulled over by 5-0, you know, regular hood shit. Only there’s a hell of a lot more to this standard traffic stop! Tasha reported Tariq missing and gave the description of Kanan so they already think he done kidnapped the lil twerp, but once they check the trunk and find the gun it is all bloodshed, hellfire and brimstone from there on out! Once Tariq says he was being held against his will, Kanan knew there was only way way out – Grand Theft Auto flooowwww!!

Tariq is out in the back of the cop car and a cop goes to put Kanan in cuffs. Kanan says some real ass “been a long time since I been cuffed” lines then goes all Equalizer 2 on these mufuckas! Felt like I was playing Unreal Tournament in 01 again with the ridiculous amount of HEADSHOTS this guy was bussin off.

Straight up James Bond pistol marksman in this bish. One shot Golden Gun kills only! Too bad that boy got the King Robert 2 holes to the body treatment and slowly started to bleed out. It was a light 1v4 for Kanan and just as he finishes off sorry ass shooting cop #4, Tariq is in the back of the squad car shitting all the bricks. To my (probably everyone’s) surprise, Kanan just looks at his 2nd lost son, hop in a cop care and drives into (the sunset) a telephone pole and dies slowly. Tasha Tash Tasha, you just had to be spiteful and go behind your husband’s back and frame Kanan for Ray Ray’s murder as revenge for when he scared Silver into a disappearing act.

The rest of the episode is a mere formality, as Blanca comes for Tasha during questioning. Too bad her alibi game too strong!! Keisha lies on Kanan and Tariq breaks out the teenage waterworks as they sew up this murder cover up a tad to breezy. Angela goes so far as to return Blanca’s box of investigation evidence and tell her, “You were right, this is below my pay grade.” I was in stitches!!!! The bravado on this woman is bar none when she has a victory lined up!

At the morgue, Tommy waits for Ghost to arrive for the body identification. When he does, Tommy says he didn’t know if he’d make it. Ghost obviously doesn’t appreciate that and all his boy can say is, “With you brother, I just don’t know anymore” They run through the long list of bosses, OGs and gangstas they’ve lost over the decades. Tommy looks at the body and closes out the episode by telling his old friend, “Rest in peace you tough bastard.” 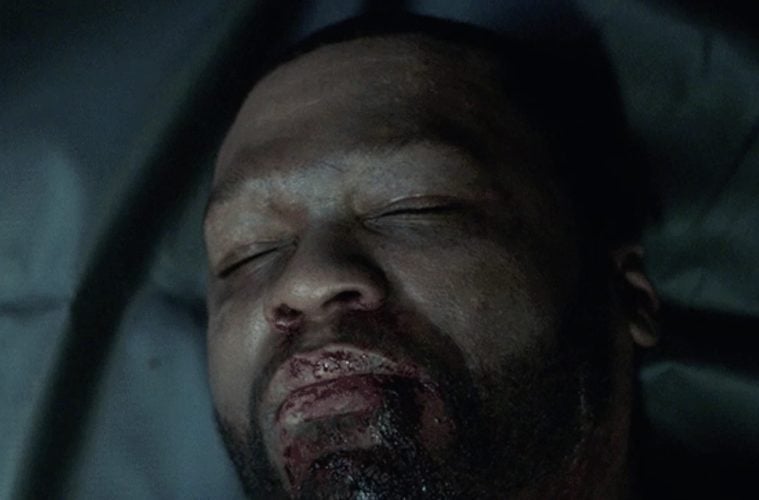 Dre’s introduction of Cristobal to the young lady that manages the clubs went real well. A little too well. Especially after that severed head finding.

Moral of the Episode: Can’t trust nobody. Not even your attorney

BTW, I like how they waited until Diego Jimenez was dead, to introduce the fact that Cristobal’s government is Diego.