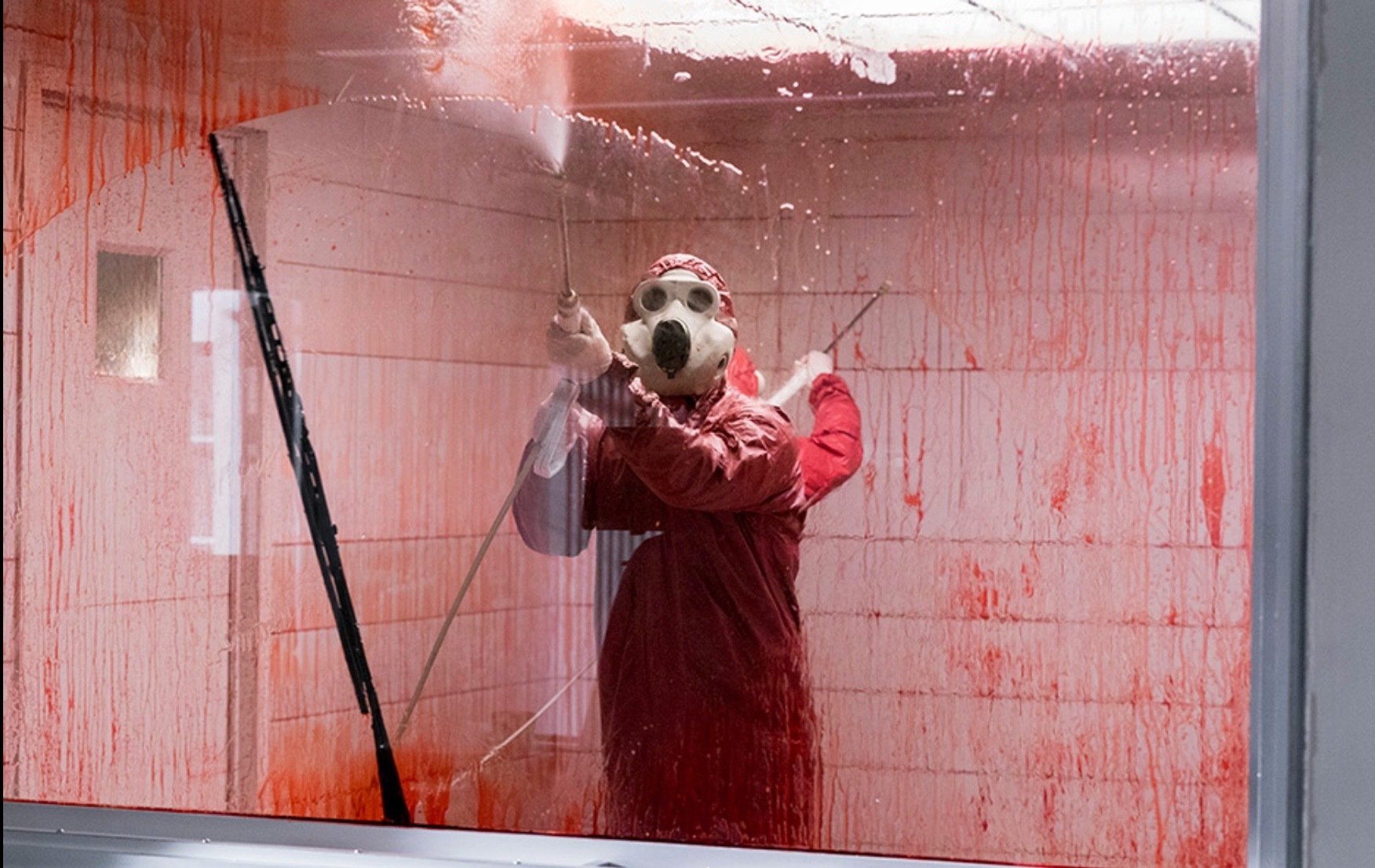 We open right where we left off: with Starr holding a gun to Jesse’s head in hopes that he’ll kill the AllFather somehow. Well, Jesse gets his John Wick on in the elevator and takes out a gaggle of Grail lackeys while changing floors. They get back down to Grail HQ, and Jesse puts one right in the AllFather’s sternum! Then he hands the gun to Starr. Then the AllFather raises his hand, applauding the effort. Starr places the gun to Jesse’s head again. Opening credits run.

TC wakes Marie L’Angelle to let her know the Osaka job is done. The souls are here for her! Standing in the hallway is Jody, with a testy Tulip and a gut-shot Agent Featherstone. Marie asks for the souls. Jody points to the front door. She opens the door to be greeted by Madame Sabina Boyd and a whole lot of dead folks whose souls she’s eaten over the years. Marie wakes with a start and looks furtively toward the rotary phone with no numbers in her den. The voice on the other end says, “What do you want?”

Cassidy and his boo Eccarius leave a random bar and catch a cab. After they get out, the driver takes off a disguise to reveal Agent Hoover, arming himself with all types of anti-vamp knick-knacks. He looks in the rear view for some courage and is met by the glare of the entire Infant Du Squad! Yeah, he done messed up.

TC walks through the foyer and hears the doorbell ringing off the hook. A chill takes TC, and he looks shook as all hell. TC enters Marie’s room and brings a guest: Satan!

As in, 80’s Wolf of Wall Street Satan with the body of Terry Crews. Yeah, he’s hella familiar with Marie They looking like homies, thick as thieves. Satan wants to know why Marie hasn’t joined him in the fiery down under. Marie makes it clear that she has no intention of leaving the earthly realm, AND she wants to cut a new deal. Satan is not with the shits, but he’s listening. Marie puts him on to the thorn in her side: Tulip O’Hare.

Cut to: a gross generalization supercut montage of all things Japan. Then, the haphazard trio of Jody, Tulip, and Featherstone. They share some banter, then Featherstone hands the others their falsified credentials. Tulip chews bubblegum; because her assumed identity chews bubblegum.

Back at Grail HQ, Jesse is strapped to a device and told that Genesis will be taken from him. Jesse laughs, issues a threat about how it’ll destroy whoever they put Genesis into. AllFather calls his bluff and has Humperdoo enter a secret room behind the wall in his office. The device lights up, and Genesis travels out of Jesse through a tube…and into Humperdoo! After what appears to be a moment of elation, Humperdoo explodes into a red mist of nondescript organs! There are bits of the boy every-damn-where in that room.

Genesis rejoins Jesse through the tube and Jesse says, “Told ‘ya.” The AllFather ain’t even the least bit shook, without a moment’s hesitation he just utters, “Send in the next one.” A clone of Humperdoo, the last scion of the Christ, walks into the secret room and awaits his fate. Between stolen moments, Starr and Jesse work out just how they can kill AllFather before Genesis finds a home in Humperdoo. Starr says he put a gun in Jesse’s pocket. 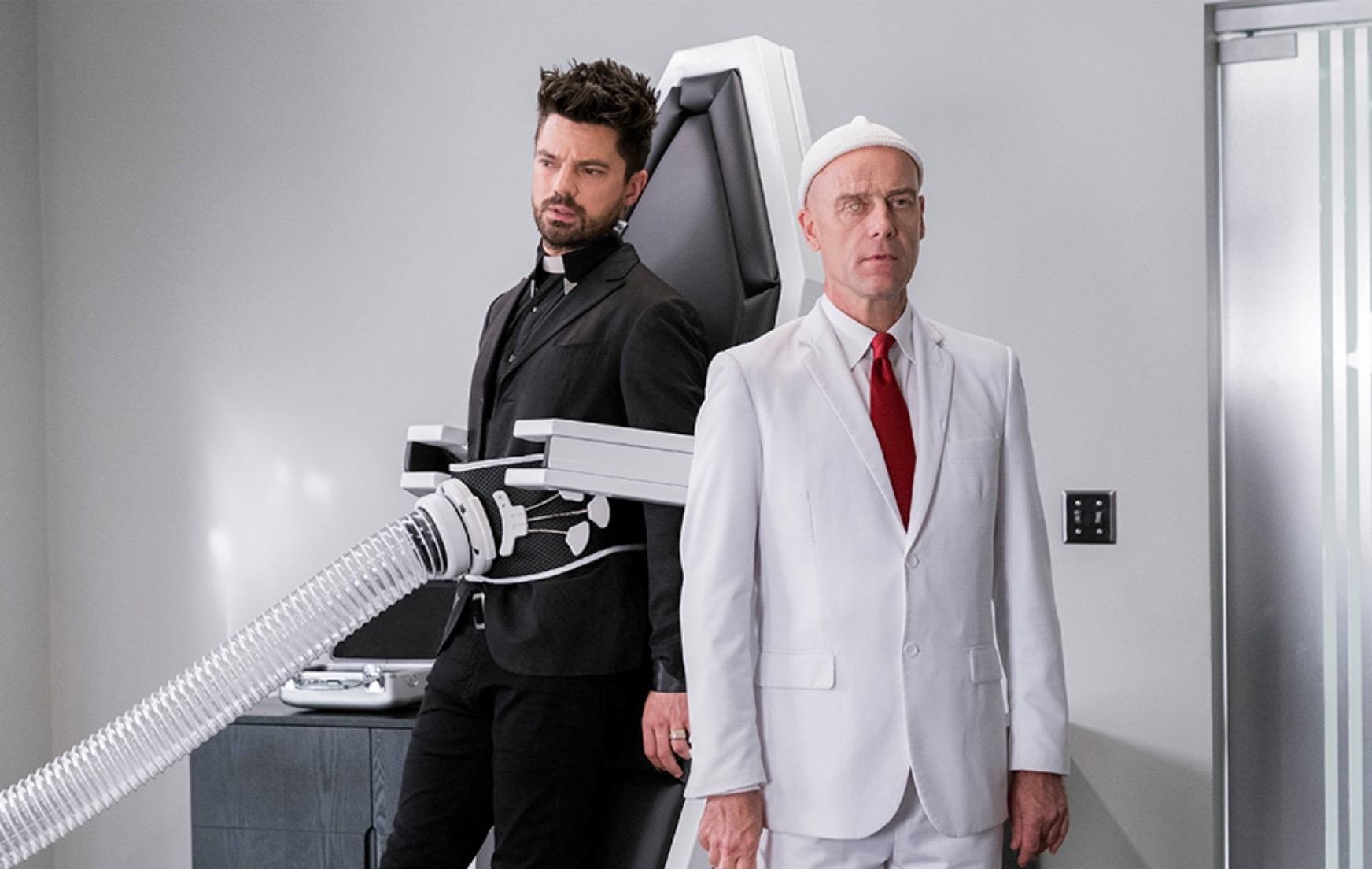 Cut to: Tulip getting very, very awkwardly hit on by Jody in the most out of context scene in any TV show, ever. As Jody goes in for a handful of Tulip’s lady parts, we hear, “Freeze!”. Lights go up and we find ourselves party to a sexual harassment seminar being led by Featherstone, using Jody and Tulip as stand-ins for scenarios! This whole scene had me looking for a missed episode! Featherstone calls for a high-ranking businessman to fill in for Tulip and has Tulip fill in as the aggressor.

Tulip is really, really good at doing bad things — sexual harassment is no exception. She gets a good grip of said businessman’s booty meat then, “Freeze!”. Featherstone makes a note of the situation, scolds the pervy businessmen in the audience and dismisses them for a break. Tulip and Featherstone share 80’s buddy cop flick level banter before moving on the next part of the heist, which involves the ID Tulip took from the businessman.

Now we’re in Hell, literally. The flames on the floor reflect onto the ceiling and posh office decor. We pan down to the Angel of Death, looking fly as usual. Satan walks in, says, “Tulip O’Hare. Bring her to me.” The Angel just saunters out the door, swaggy as demonically possible.

Back to: a cacophony of exploding Humperdoos put to classical music. AllFather has seen enough. He calls for his head scientist, Dr. Sputnik. She explains her process of combining well-known DNA from the ages using one ‘good’ and one ‘bad’ person. The batch that failed used Serena Williams (good) and Louis XVI (16th, and ‘bad’ (and boujee)).

Sputnik goes into more detail, but Starr gets a notification on his celly. He heads out of the room to see a collection of photos sent from Hoover’s phone by Cassidy. Starr gets the picture and gives Cass the go-ahead to kill Hoover. Cassidy texts back to verify. Starr verifies. Funny as hell. Eccarius walks in and suggests turning Hoover to their ’cause’. 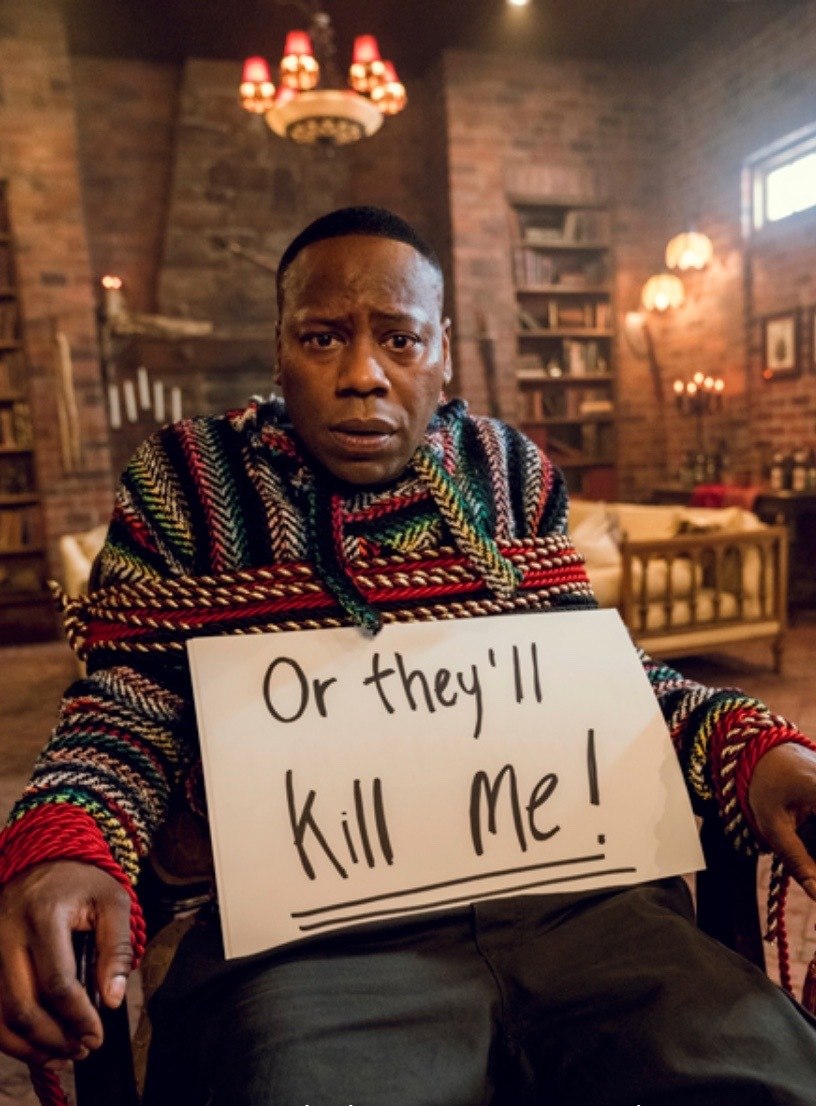 Arigato! Osaka is not ready. Tulip and Featherstone use the lifted ID to gain access to a restricted area. They so cool, they just look up at the camera; all the while knowing that security is looking dead at them. Security is, in fact, looking dead at them! They get the riot gear out and head for the door, where they are greeted by the new hire in Human Resources: Jody!

We cut back over to Tulip. She gets a text from Jody: a smiley face emoji. Featherstone goes to hack the vault while hitting Tulip with the kind of subs that start fights in these streets. Tulip keeps it icy. As she starts to work on lock picking, Featherstone lightly warns against it. Tulip gets into the lock and is thrown hella far by the electrified door! Insert sub from Featherstone. Tulip takes the gum out of her mouth, presses it against the lockpick and chucks it at the vault door, shorting it and unlocking it in seconds. Insert sub from Tulip. The unlikely but capable duo walk in to find a vertical chamber filled to the brim with souls. 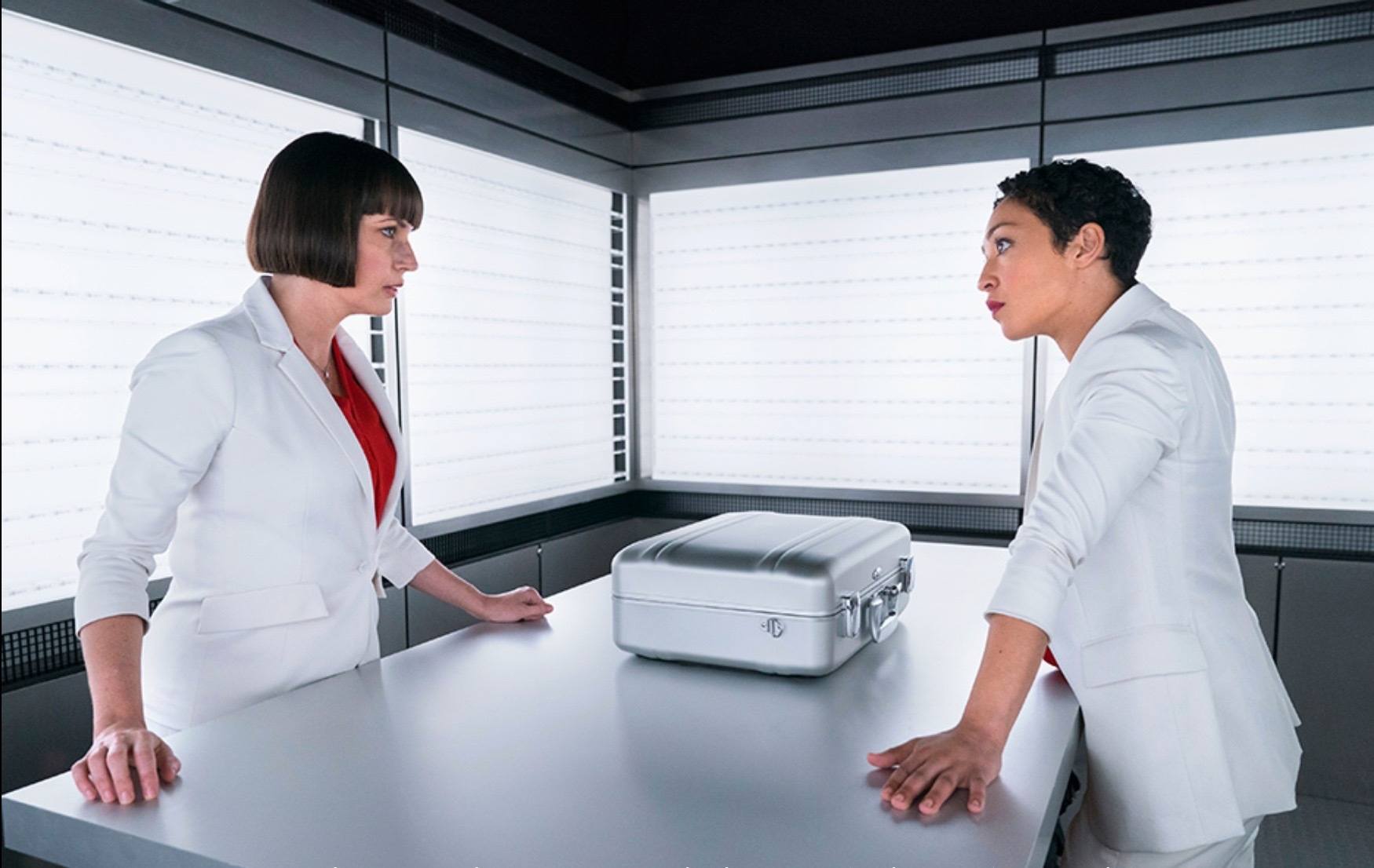 Back in New Orleans, Hoover is receiving his blood rite: the ‘gift’ of vampirism. He’s actually hyped, says his mom would be so mad if he just died. The Infants show Hoover mad love and they celebrate a new brother into the fold. Cassidy feels some kind of way about the whole situation.

We catch up with Oceans 2-and-a-half as they pack all them souls tight into a suitcase before they dip out, smooth as a hot knife through butter. In the lobby, they pass a tall figure in black with no second looks. That figure is the Angel of Death! She goes to follow, but is met by a businessman who very, very confidently says something to her about her booty meat. Remember how she bull-whipped The Saint a while back? Yeah, she was reaching for that.

As we get shifted over to the trio landing back in NOLA, Jody says he’s getting the truck. Featherstone takes a minute to compliment Tulip on the job they pulled. Tulip accepts the compliment. Featherstone takes it back. Tulip takes a deep ‘don’t beat her ass’ breath and is met by the Angel, who calls her by name and says to come with her. The Angel doesn’t know Tulip, and Tulip can tell. So, Tulip says, I can point you to her…and gives her Featherstone in her place! Tulip books it to Jody’s truck, saying Featherstone got pinched by the cops. Opening her suitcase reveals nothing but a laptop and some Ethernet cables! The O’Hare curse lingers over Tulip as she plots the next move.

In what feels like only seconds after being turned, Hoover is about to go on his ‘flight’ with Eccarius! He’s got his neck pillow and luggage, and is being taken out by Eccarius himself. Cassidy wishes him a good second chance. On his way out for a smoke, Cass goes to throw away his cigarette butt and sees Lisa’s neck pillow: bloodied and torn. Meanwhile, Hoover and Eccarius are in the jacked up blue station wagon with Paganini’s Greatest Hits bumping loud. Eccarius does his best ‘you ever dance with the Devil in the pale moonlight’ bit and is interrupted by Cassidy. Cass sees through the BS and pulls out Lisa’s neck pillow. Eccarius taps into the speedforce and knocks Cassidy out cold! He looks back for Hoover, but he done booked it out the door.

Grail HQ is a hot mess, but Dr. Sputnik thinks she’s nailed the DNA recombination finally. She holds up the combined genes of Thomas Jefferson (bad) and Wayne Brady (good?), called: the Tom/Brady! The next Humperdoo is brought in, injected with that Tom/Brady, and given Genesis. Humperdoo speaks, “Bow to me!” AllFather and Jesse are unnaturally compelled to bow. Genesis has found a new home! Sputnik pops Humperdoo in the dome with the Luger. AllFather commands, “Bring in the messiah.” Jesse looks petrified. 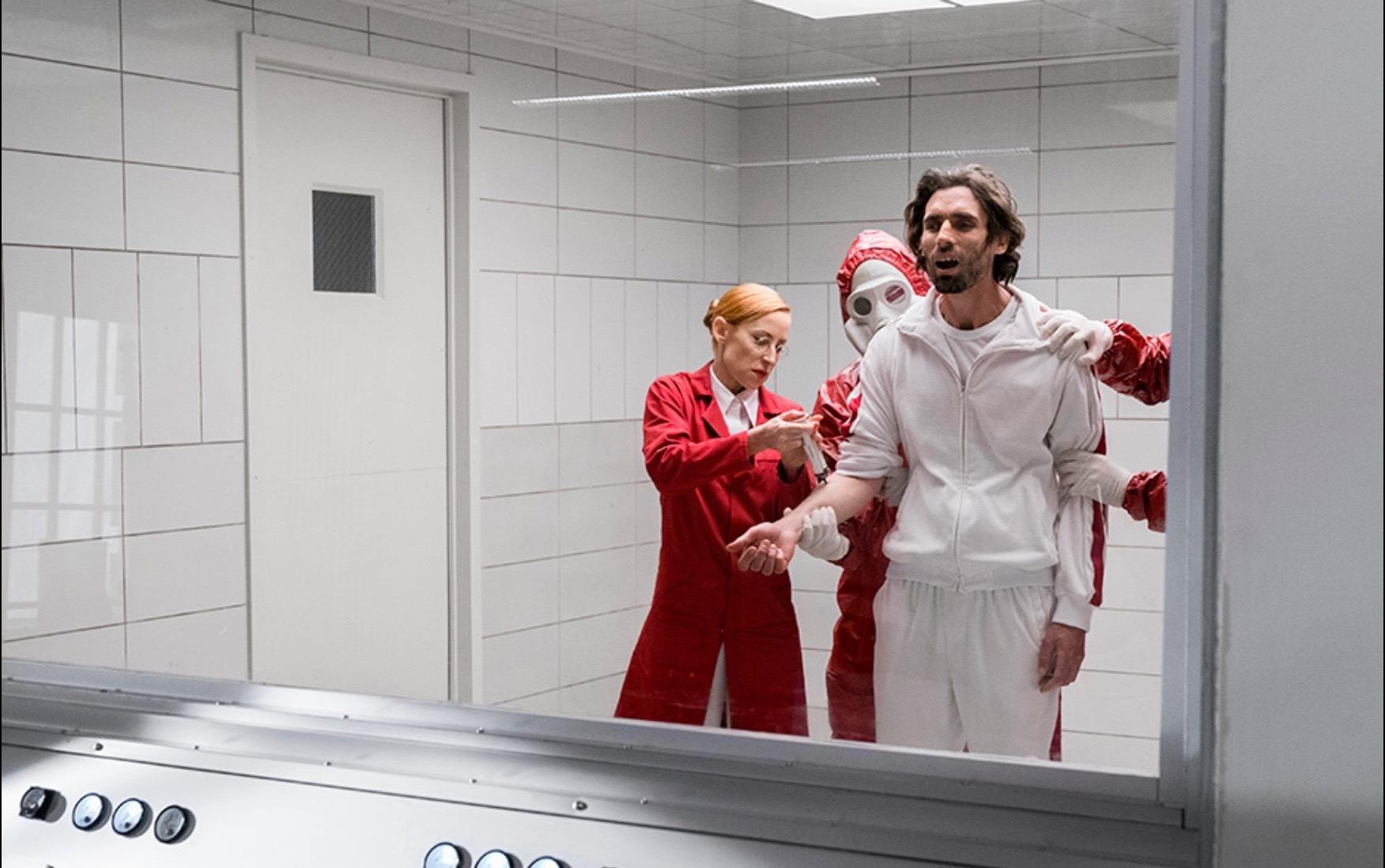 Eugene is swearing up and down that he knows God has a purpose for him. Like, he’s running a soliloquy about the shit, without end. He’s on line at the bus stop to Hell along with The Saint; Hitler, the Angel, and Featherstone. She looks in disbelief at Hitler as he asks her for her phone. Rick from the strip mall electronics shop, with a swastika tat on his wrist, gets a text.

Watching Preacher? Find BNP’s other reviews of the series here.