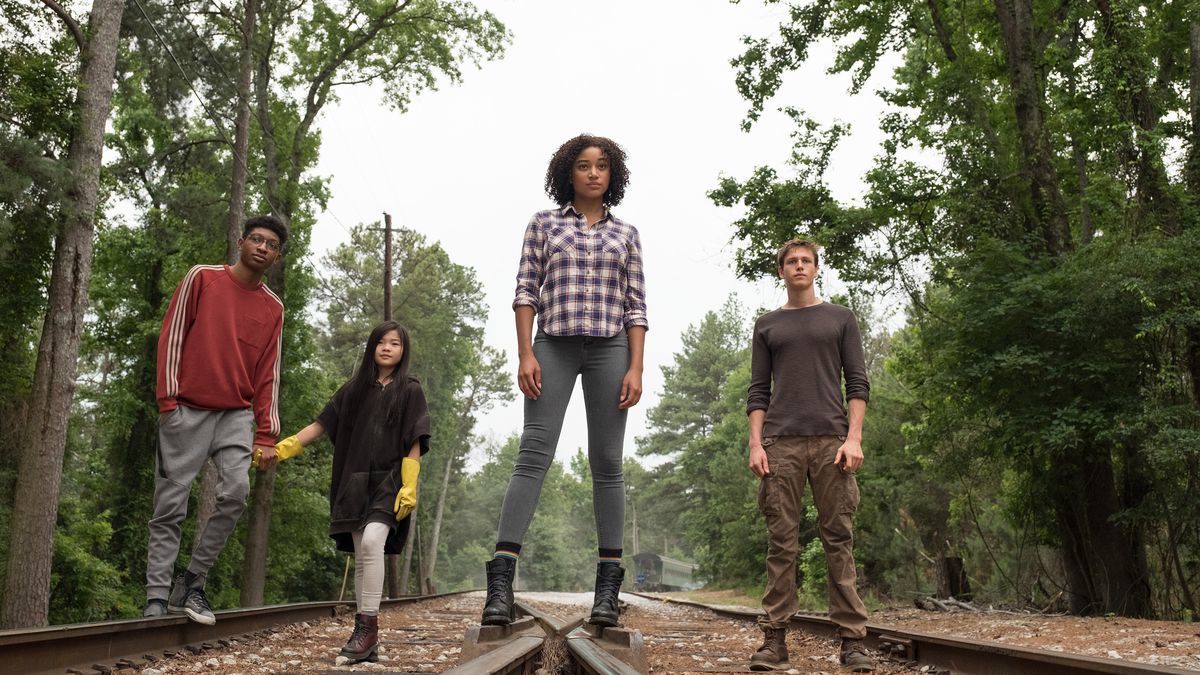 The Darkest Minds does its very best to become the next Hunger Games in the long line of YA novels that have been adapted into summer blockbusters. Unfortunately, they won’t quite succeed. The Darkest Minds is about a dystopian future where 98% of the adolescent population succumbs to a pandemic (with the worst abbreviation ever) called IAAN, and is scattered with heart and humor that falls flat at times, but does strike an undeniable cord at a few points. With the remaining 2% of kids manifesting one of 5 powers, there are moments of some really nice action with powers being put on display, but it’s never enough amaze.

We live in a world where Marvel produces gorgeous, sweeping, million-dollar fight sequences that push the boundaries and astound; we have movies and shows where DC effortlessly showcases vigilantes defending cities with utility belts or arrows and traveling through time, all to save the love of their life; worlds where dragons are brought to life like never before. I really wanted this to be a win for director Jennifer Yuh Nelson, but you can’t come with simply your best effort anymore — that time in Hollywood is over. You can’t create a couple of really cool scenes and stitch them together alongside horrible dialogue and expect a hit. It’s the golden age of television and the era of superheroes in Hollywood, and filmmakers, writers, and directors better come hard or fade into summer obscurity behind the never-ending onslaught of films flooding the market in theaters and premiere streaming. Despite it being a miss though, The Darkest Minds shines in the representation department, and Nelson shows that she has the potential to be an up-and-coming star behind the camera. Her cast is beautiful and as diverse as can be. She brings out the best in her actors and actresses of multiple ethnicities, and it doesn’t feel like we’re being cheated out of a realistic future, should something like this happen.

I love the premise of The Darkest Minds, but the movie is predictable, often plodding, and other times feels like an eye-roll inducing X-Men rip-off tailored made for the teens of the world, which isn’t a problem in itself, but hardly extends to a wider audience of moviegoers. The movie hones in on the comedy of a 16-year old and promotes an overall vibe of someone born after 2000. A lot of the conversations had by the kids are cringe worthy, and perhaps worse, the adults have some of the worst lines you’ll hear in years. I wish I could say the hamfisted love story stuck the landing but much of it can be summarized by the main characters, Ruby (Amandla Stenberg) and Liam (Harris Dickenson), rehashing scenes from other teenage romance movies in a way that’s simply disappointing.

Ten-year-old Ruby is living an amazing life as an only child. Her mom and dad love her dearly and get her nice things for her birthday despite the rumblings on the news. But Ruby is smart and notices that her class has steadily decreased. She makes the promise we all knew she’d make and never be able to keep, ‘cuz bad writing. She sneaks into mommy and daddy’s room to sleep and that would be the last good moment in her young life. President Gray is determined to “find a cure for this illness.” With this lie as his Teflon, he declares young people a threat to society, rounds up everyone under the age of 20, and ships them off to internment camps.

Ruby’s powers manifest on her 10th birthday, and the next day she encounters the most devastating moment of her life. Unable to control her powers, she wipes her mom’s memory of Ruby and in arguably the most powerful scene of the movie, gets treated like a lost child, locked in the garage, and her own mother calls 5-0 on her, and is added to the list of captures.

Act 2) The Worst Summer Camp Ever

Locked up in the rehabilitation camp called Thurmund, Ruby finds out how cold the real world is when Dr. Viceroy explains to her the 5 superpower colors and ranking system. Green, the least threatening, results in genius level intelligence. They’re great at strategy, problem solving, map reading, etc. Blue is next on the danger scale, and powers manifest in the form of telekinetic abilities. Yellow is the highest on the scale. These individuals can control electricity and electronics to some degree. The last 2 are considered too dangerous and killed on sight. Like, what?! This is the move? It was a hell of a leap, but as soon as Ruby heard that reds, pyrokenesis, and the most feared oranges, mind control capabilities, get that euthenization booster shot off the rip, she makes Dr. V think she’s a green and spends the next 6 years in hiding.

The biggest problem with act 2 is they don’t tell you shit. You just see kids walking around and making things like Satan’s little helpers in an ICE camp. There are some guard dogs and dudes with guns, but there aren’t any power dampening cuff on the kids, so I find it hard to believe these kids would go through this servitude when they could easily work together and bust out the joint. Speaking of busting out, the trailers make you think most of this movie takes place in these camps but in reality, she’s only there for like 15 minutes of the movie and everything afterwards is a race to “safety.” A piercing white noise frequency PSA reveals that she’s really an orange level superhuman, is nearly murked out, and gets rescued by Mandy Moore. Yeah… that’s all I got.

All the info you need to understand the rest of the movie flies at you fast and jumbled. Mandy Moore is Cate, and she’s a part of “The League” that opposed the government and wants to help Ruby, one of the last orange-level kids left.

All Ruby needed was to brush up against Cate’s League homie and get a glimpse inside his mind to know she don’t want to be associated with that shady fuck boi and straight bounces. She links up with the kids you see in all the posters and trailers, become best friends, and start their mission to find the infamous Slip Kid who houses kids on the run. Liam is the previously mentioned eventual and unnecessary love interest who is very advanced at his telekinesis after spending time in The League, before realizing they’re creating soldiers to fight in the revolution (that they’re planning for the sequel). I mean, that sounds like a pretty good deal to me, but to each their own Liam. Zu is the little sister of the team, who has pretty beast electrical powers. Chubs is the brains of the squad, with his blue intellect. Played by The Get Down alum Skylan Brooks who has perfected the black nerd problems having role, Chubs provides the majority of the comedic relief, but the good jokes are few and far between. It’s a cute little road trip movie until mufuckin Brienne of Tarth shows up with the white noise frequency barrel on the yopper bounty hunting like a fucking beast. She terrorizes the rag tag crew until Ruby is forced to flex, resulting in the most badass scene in the movie.

Ruby is still learning how to master her powers but knows she can make people do things by touching them and barking orders. She tells Lady Jane (her name was literally Lady Jane..can’t make this up) to walk into the forest and to keep walking until her fucking Achilles tendon has deteriorated, and not to stop no matter how bad her legs burn, how thirsty she becomes or how hungry she becomes after weeks of withering away into the worthless child killer she is.

After riding around listening to repetitive radio announcements that kids can join President Gray’s son in being cured, they ditch the whip, get a Slip Kid clue from some teens at the mall (still not making this up) and find My Hero Academia in the woods and are treated like heroes.

Liam the Legend broke kids out of a camp and ditched The League all before his 18th birthday. Ruby is allegedly the only Orange left besides the Slip Kid who, dun dun dun, Is President Gray’s son, Clancy. Everything gets more robotic and predictable from there on out. The crew gets put on a strict eating and living schedule like everywhere else in this world. Clancy helps Ruby train and control her powers. Liam gets jealous of their training time together. In return, Clancy wants to learn how Ruby can erase herself from people’s memories. Clancy turns out to be evil once he gets what he wants and sexually assaults Ruby. Ruby shares that memory with Liam who wants to kill Clancy, who calls in the feds… the military… whoever, and they roll up with fire-breathing reds.

Mayhem breaks loose, Liam gets Zu to safety, Chubs almost dies, Ruby fights Clancy and uses her mind control to make a helicopter pilot fly his helicopter straight at Clancy. She then realizes she must call Mandy Moore to come and rescue her again. Ruby has to make the hard decision to let Liam go, but not before the highly anticipated kiss. They lock lips and each one of their touching little moments gets the Thanos snap erasure, because he would never had left her in The League that he despises.

She takes her place as the most powerful mutant in the land, gets her standing ovation, drops the Hunger Games 3 finger salute, but with the color orange. It’s all so very familiar.

With minimal new ideas and concepts, I was quite disappointed at the end of The Darkest Minds. It almost felt like storylines from 3 different X-Men comics and movies were sewn together, and this movie was spit out of a 3D printer. I will say that they utilized the Thanos snap memory fade away perfectly. They made it their own, and it became a huge plot piece that didn’t suck, so props to The Darkest Minds on that one. I loved seeing all the black, brown, and Asian faces as the movie progressed. Nelson and her team never lost sight of the need for diversity and kept putting the marginalized front and center from start to finish.