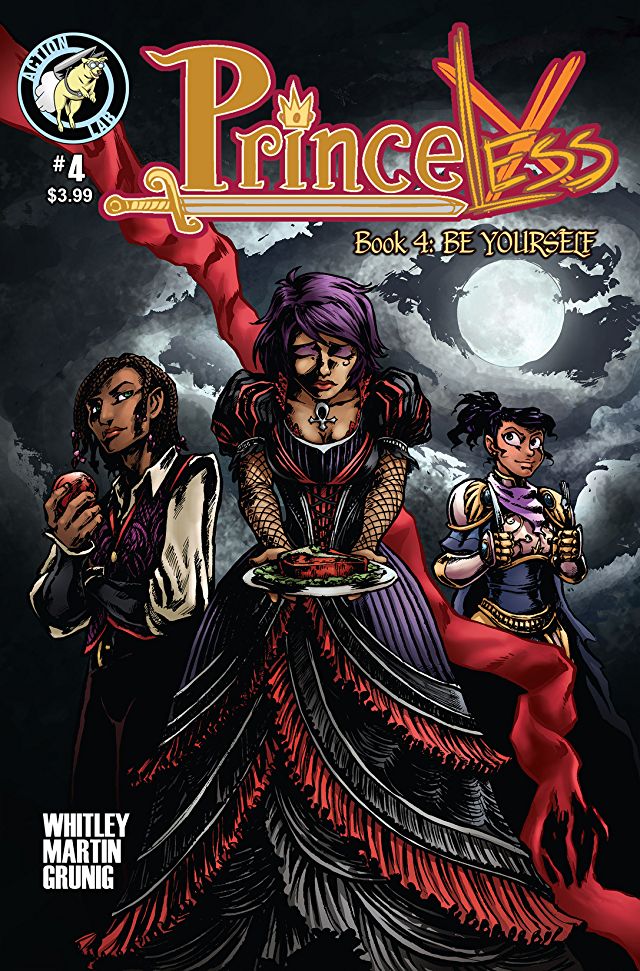 Shout-out to Angoisse, Adrienne’s big sister, and woe be her because she suffers from middle-child syndrome.

Last issue it was revealed that she was caught in an internal conflict: she was asked to drug her little sister by pretty boy — oh excuse me, Raphael the Handsome — who has plans for Adrienne. Big plans which include ending her adventuring days by delivering her to her father. If big sister doesn’t do has her loverboy asks, he’s sure to leave her… he’s sure to leave her… what? WHAT IS LIFE?

[divider type=”space_thin”]
I love the tension here between Adrienne who obviously doesn’t care for nor like Raphael and the charm he exhibits over the other lady folk. It makes for a hilarious dynamic that carries us through this book. We also see Angoisse struggling with her decision further on with each interaction that she has with Adrienne and also with Raphael.

Also Sparky is having fun being humanless at the swamp with all the critters and creatures and goblins, until needed to save the day again. SURPRISE! We have a save by a UNEXPECTED person and a lot of heart-warming moments at the end. Even someone content to run for president (no, I’m not talking about Yeezus). Emily Martin’s familiar art style is spot on and always welcomed to see: Adrienne sports either a new ‘do or is simply doing a deep conditioning overnight (or maybe her bantu knots or flat twists came undone in the night?). Ether way she’s fierce and equipped to kick some frackboy butt to protect herself and her sister.

Note: This issue marks issue number four, which is the big finale of Book Four of our Princeless adventures! Congrats team! What does this mean for us, the Princeless fanbase? This means that the trade will be available soon, quite possibly as soon as next month in October. What does this also mean? That soon, Book Five will be out circulating in single issue form before the year is out!