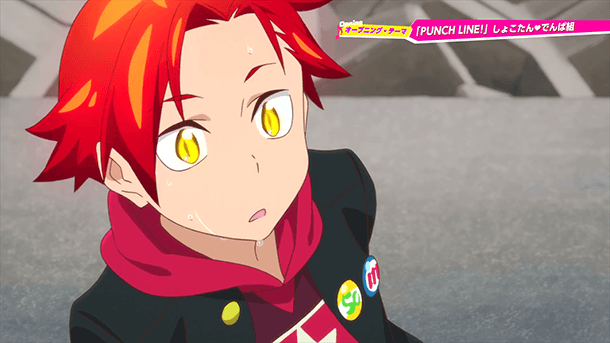 So this past month I’ve figuratively locked myself in the Hyperbolic Time Chamber of anime, meaning that I’ve just watched a lot of shows, but that just doesn’t sound as cool right? Now did you know that panties can save the world? Well if you didn’t, now ya know. That’s where an anime called Punch Line comes in and I’ll be honest I almost dropped it because it seemed like excessive fan service, but as I watched on I realized that this show was much more than that. This won’t be a review mainly because this is an extremely niche show and will only appeal to you if you like it, so instead this is a recommendation. Without further ado, LET’S A GO!

The Plot
The plot of Punch Line goes a little something like this…A boy named Yuta Iridatsu lives in an apartment with four other girls who each have their own qualities and additions to the story (we’ll get to them later). Anyways for some reason whenever Yuta sees a glimpse of a girl’s panties he basically Hulks up and turns Super Saiyan, complete with a hair color change and superhuman abilities. Oh, and if he sees a girl’s panties twice in a row a meteor will crash into Earth and destroy the planet, did I forget to mention that?


[divider type=”space_thin”]
A magical girl named Strange Juice, who also seems to be able to use those powers, is also introduced in the first episode and of course she gives Yuta a view of her panties by accident. Yuta powers up but for some reason his soul gets extracted from his body afterwards and now he must work with a Spirit Cat named Chiranosuke. Chiranosuke tells Yuta that he and his powers will save the world and he must find a way to get back in his own body before it’s too late.
[divider type=”space_thin”]
The Characters

Now let’s go back to the characters in the apartment since you’ll be seeing them a lot more in the anime. First off there’s Mikatan Narugino. She is a bubbly girl who’s also part of an Idol group named “Seas May” and has a few prime time karaoke moments. Then there’s Ito Hikiotani,  a girl who doesn’t come out of her room at all really, she just  plays video games all day. Next up we have Meika Daihatsu, who is the landlady of the apartment with a pretty bubbly attitude as well with a little added sass to her. And last but not least, we have Rabura Chichibu who works as an exorcist.


[divider type=”space_thin”]
Each character gets fleshed out during the show and that’s what turns this show from another Ecchi (Fan Service) show into a real show that can get you rooting for the characters. Some characters may even invoke other emotions or have you see yourself in them and that’s always a good quality for a show to have.
I recommend this show if you enjoyed shows like Kill La Kill and FLCL and don’t mind a few panty shots here and there. Believe me when I say you should watch this show with an open mind and you’ll enjoy every second of it.