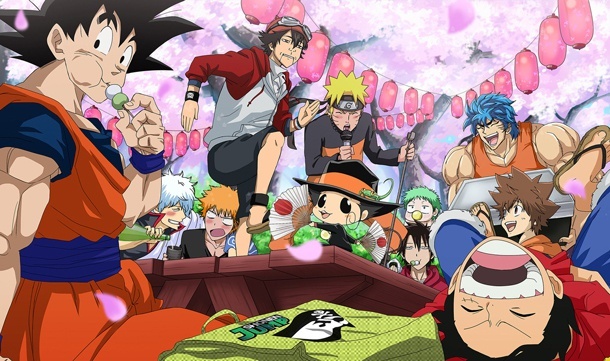 Sometimes when you’re a new anime fan, getting into things like One Piece can be hard because they have so many episodes. The challenge can be quite daunting if your willpower isn’t strong enough or if you just don’t feel like it. But you’re in luck, as 2015 had a few good anime shows that can be finished pretty quickly and at the max had 13 episodes, so there are no “but it’s so looonnnnng” excuses for these.

I’ll admit that in 2015 I didn’t watch as many new shows as normal (mainly because I was finishing up things from 2014, and I still am) and most of the ones I did watch were more than 13 episodes. Either way, I conjured up a list of my personal favorite short and sweet anime of the year. There will also be no continuations of shows, meaning shows like Durarara!!x2 Ten and Gatchaman Crowds Insight aren’t technically qualified here. Furthermore, Punchline and School-Live won’t be here either since I’ve already expressed my love for those two. 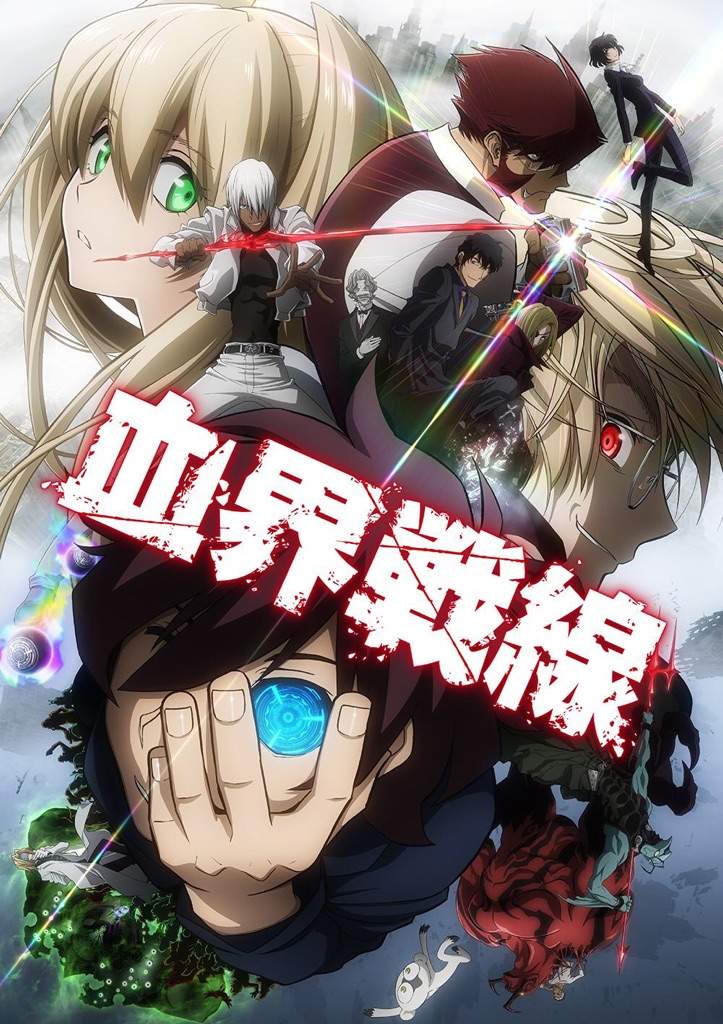 Kekkai Sensen or Blood Blockade Battlefront is a pure action anime. It revolves around a group called “Libra,” whose adventures and fights are in a place called “Hellsalem’s Lot” which was once known as New York City. After a portal to the “Beyond” was opened, a bunch of monsters and demon-like creatures started spawning from the portal. Libra has made it their mission to keep the monsters from spreading throughout the world and dedicate their lives to fighting and destroying the monsters before they get out of hand. The premise of the show is nice, simple, and it has an episodic format with each episode feeling different than the last, including an overarching narrative.

The main characters all have personalities that can be funny and serious without feeling unnatural. You’ll learn about the characters little by little and discover what motivates them to push through and keep fighting. The animation is stunning and the way the characters fight with their individual powers is something the show shines at portraying. The soundtrack for this show is amazing and ads that extra oomph! This show has a nice conclusion and was a satisfying watch all the way through. 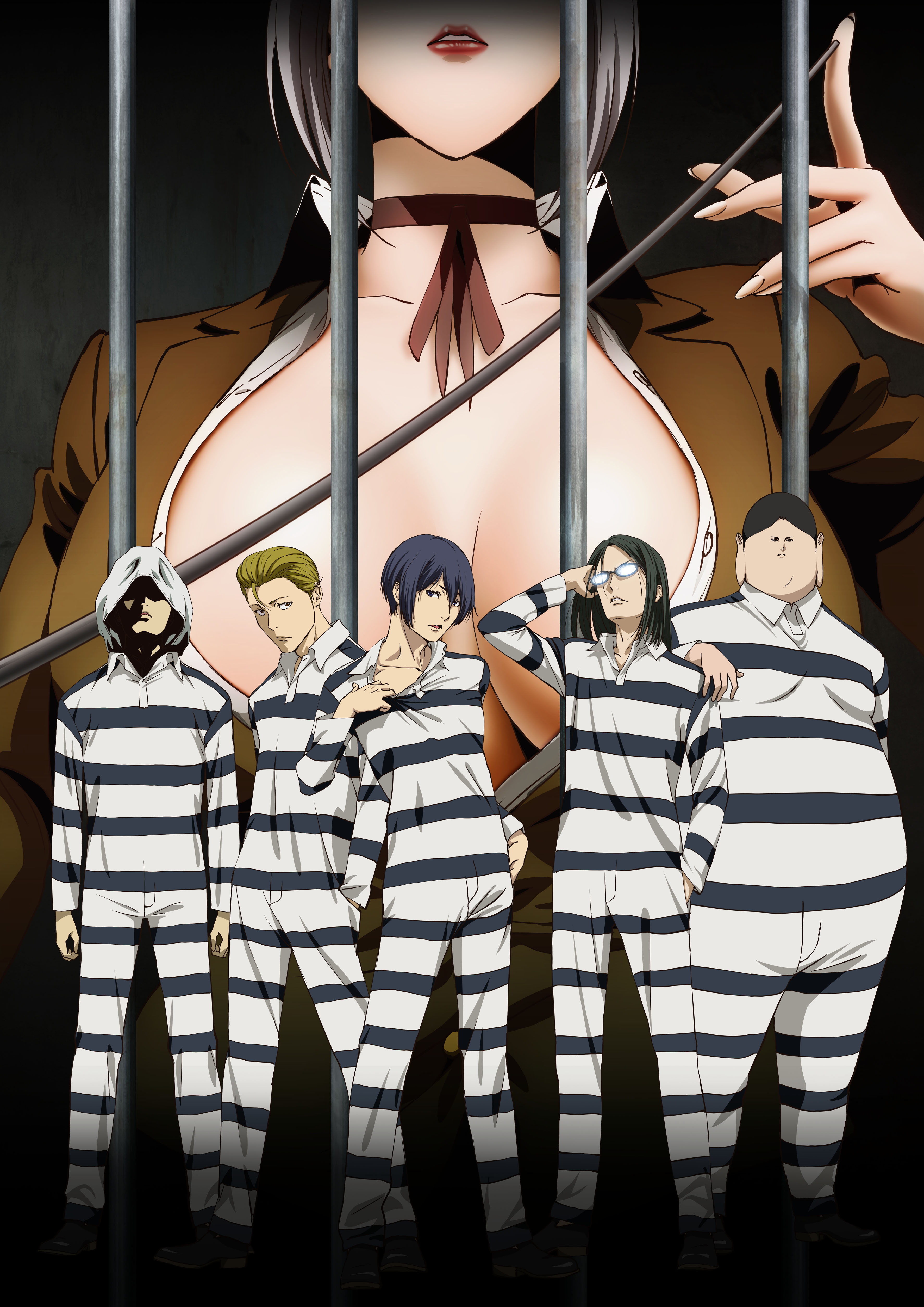 Now this one needs a little *Viewer discretion is advised* tag for it. Prison School is exactly what it sounds like, a school prison. The story revolves around a group of boys who go to one of the most strict, and harshest schools. Oh yeah, and it was previously an all girl school, they’re the first males who were allowed to attend. The school has about 1,000 girls in it and while usually for a high school boy the male to female ratio would be a dream, the way that the girls look and treat them don’t really make for an enjoyable experience. Through a few misunderstandings and a few pathetic admirable attempts at peeping, the boys are given a choice to be thrown into the school’s prison or be expelled.

The Underground Student Council keeps a watchful eye on them and frequently abuses them in comedic ways or in physical ways. Each character is more than just a stereotypical perverted high school student. Themes of self-esteem issues and even depression are explored in creative ways. The show is a comedy show with a tiny bit of drama in the form of the school’s politics and manipulation. This show has a few adult oriented themes like a girl wanting to watch a boy pee so just be ready for that kind of stuff with this one.

Up next we have an incredible hidden gem that ended up being one of my favorite shows in the past few years. Sound!Euphonium is a show that revolves around the Kitauji high school concert band club. A once great club that went to national concert band championships and was actually a championship school in that aspect, has turned into a club that can’t even get to the qualifying rounds for the tournament anymore. A new adviser and a few new students make it their mission to get back to the championship once again, and to even win once more. On the surface this show might look like “cute anime characters play instruments” but those assumptions are quickly proven wrong. This show might have cute animation but the story and characters are as real as you can get. There’s drama but the drama is never unrealistic or too much to handle for an anime show.

If you were a band geek like I was, you’ll enjoy the show even more because it really shows the inner workings of a concert band. Arguments and frustration over who gets to play solos. Some members quitting either because they didn’t enjoy it or didn’t take it seriously, and being called out to play in front of the class when you weren’t really sure how to play a note or a section of the song. The personalities of the characters clash just like a real concert band and watching their journey of heartache and perseverance is a beautiful sight. You’ll be rooting for them all the way through. Of course the music is amazing as well. 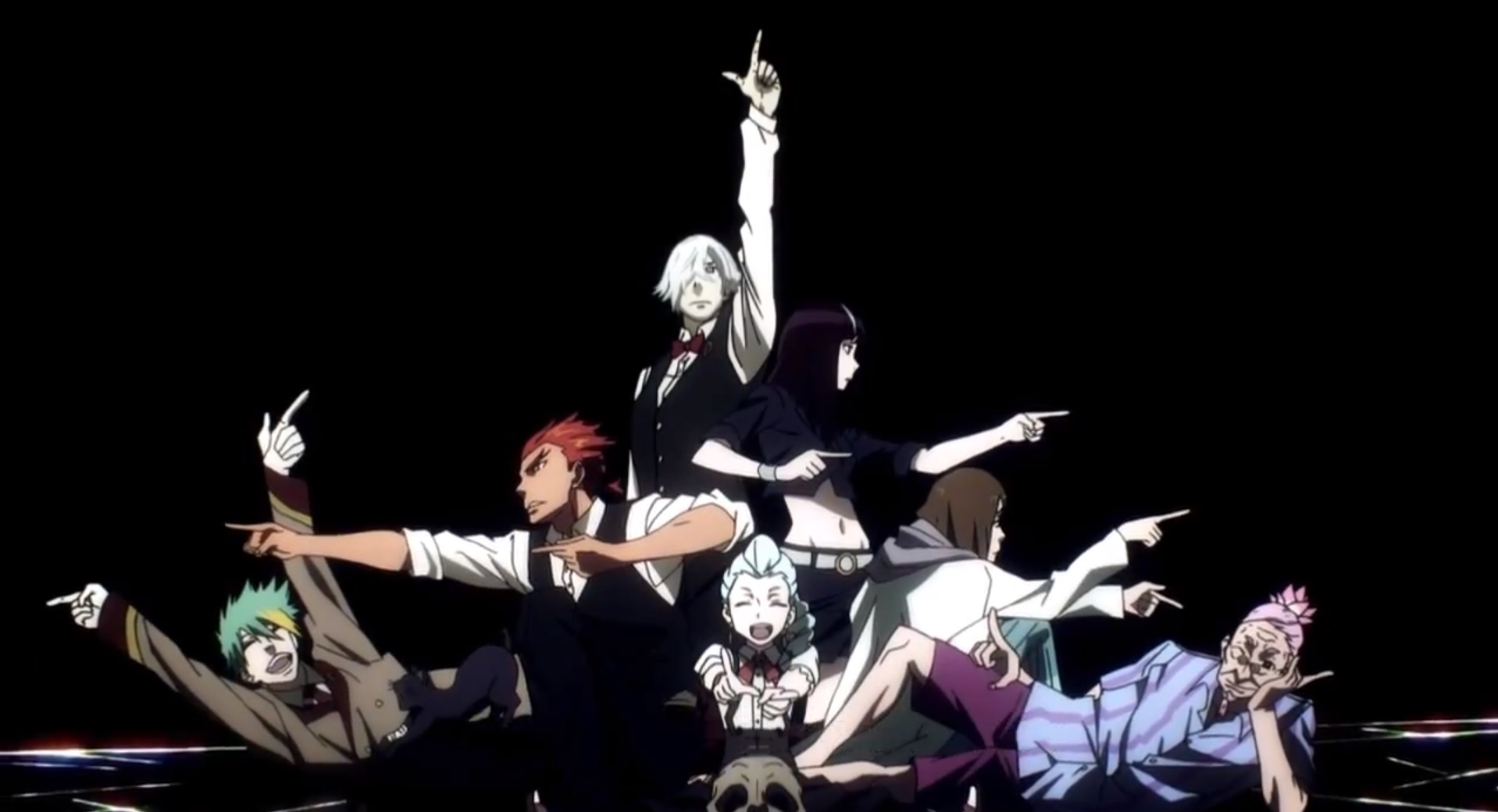 Death Parade is a show that had a lot of hype surrounding it because of the original OVA. It also comes with one of the most hype opening songs for a show ever. Whenever 2 people die at the same time, they’re sent to a supernatural super mysterious bar which is run by a bartender who, in addition to making fabulous drinks, serves as an arbiter to judge the 2 deceased people. The story of Death Parade focuses on an arbiter named Decim who is an emotionless arbiter who has an infatuation with puppets. A girl named Chiyuki wakes up in his bar with no memory of who she is or why she’s there and starts working as Decim’s assistant while he makes judgments.

The series is episodic with new people to judge each episode save for a couple of stories which require 2 episodes to tell. Judgments are made by having the 2 deceased people play a “game.” The game is played with the premise of having their lives at stake to fully bring out their characters so that the arbiters can make a true judgment. The show follows Decim and adds another arbiter later on to provide some nice character comparisons between the 2. The relationship between Decim and Chiyuki is a focal point of the series and learning more and more about her becomes more satisfying as time goes on. This show is very emotional so be ready to grab a tissue box…or 2 tissue boxes. 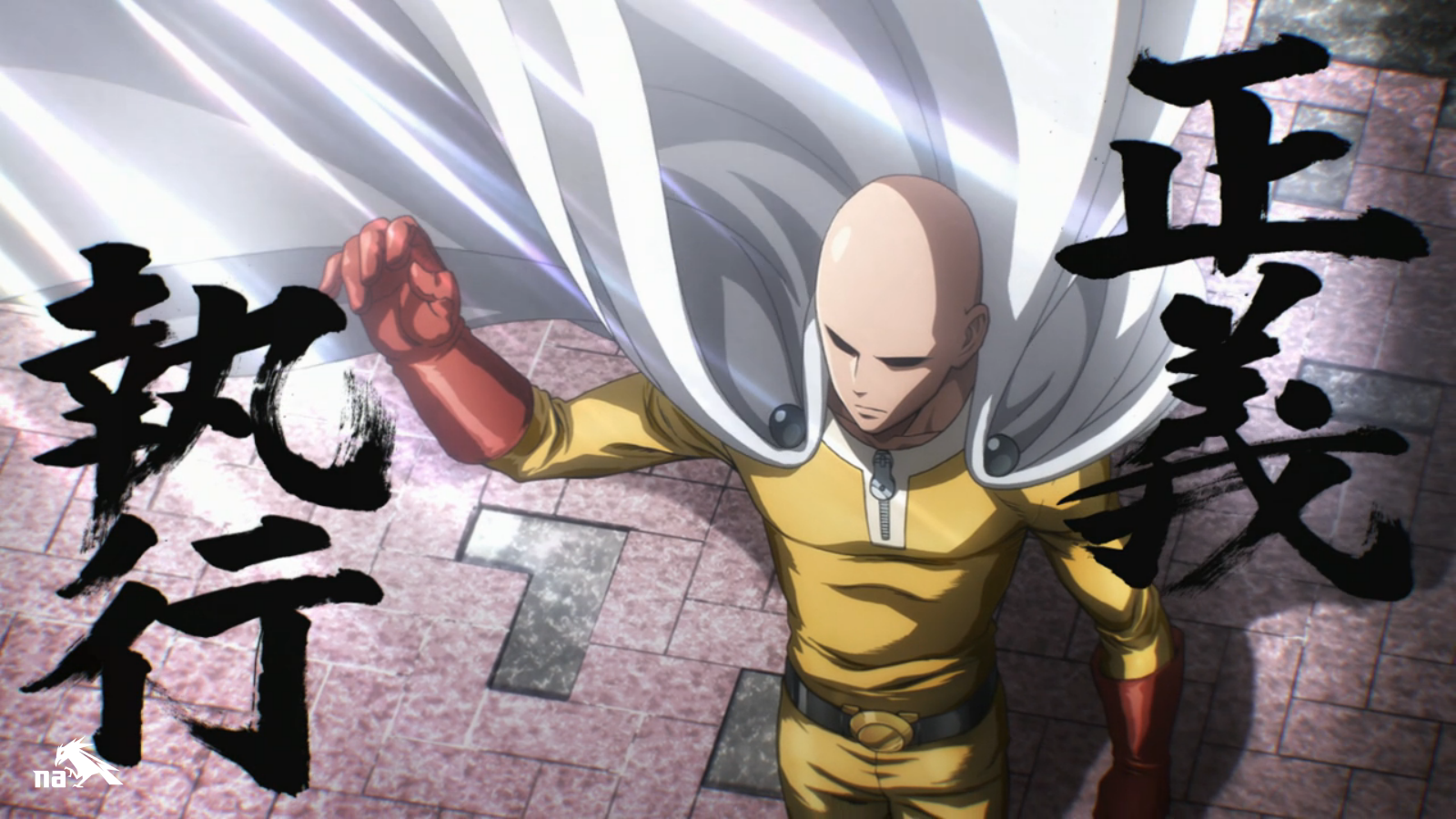 If you didn’t think OnePunch-Man would be number one then I’m sorry to disappoint you. I mean the word “One” is in the title you know? OnePunch-Man is the best show this year. This show had so much hype around it the world almost exploded. Just trust me, it was really close to exploding. It hits every single sweet spot that an anime can hit. Every frame of animation is great. The soundtrack is great. The voice acting is great. Everything is great. OnePunch-Man is about a human named Saitama who is so strong that he defeats everyone he faces with One Punch no matter how strong the opponent is. He trained so hard that he’s become bored of fighting in general because there’s never a challenge for him. He meets a cyborg named Genos who wants Saitama to accept him as his disciple and their personalities are hilarious together.

The show is an action comedy show and is amazing at both aspects. The story of the show follows them as they try to become heroes by joining the hero association. The way Saitama approaches fights is always hilarious and his appearance makes him stand out in terms of main characters in general. His rounded face and bored expressions are something fresh and adds character to each scene he’s in. In terms of character development, Genos and Saitama are the main ones who get explored and Saitama shows why he’s the strongest. Not just because of his physical ability but his mental fortitude. Another character named Mumen Rider that comes along is just as much of a hero as Saitama and will most likely be your favorite character after his scenes are done. OnePunch-Man is about as good as a show can get. Entertainment is abound in this one and when it’s over you’ll be begging for one more punch.

Alright, there you have it — 5 shows that don’t require much of your time, so go out and start watching. Enjoy and have a great holiday break filled with anime like Anime Santa intended.