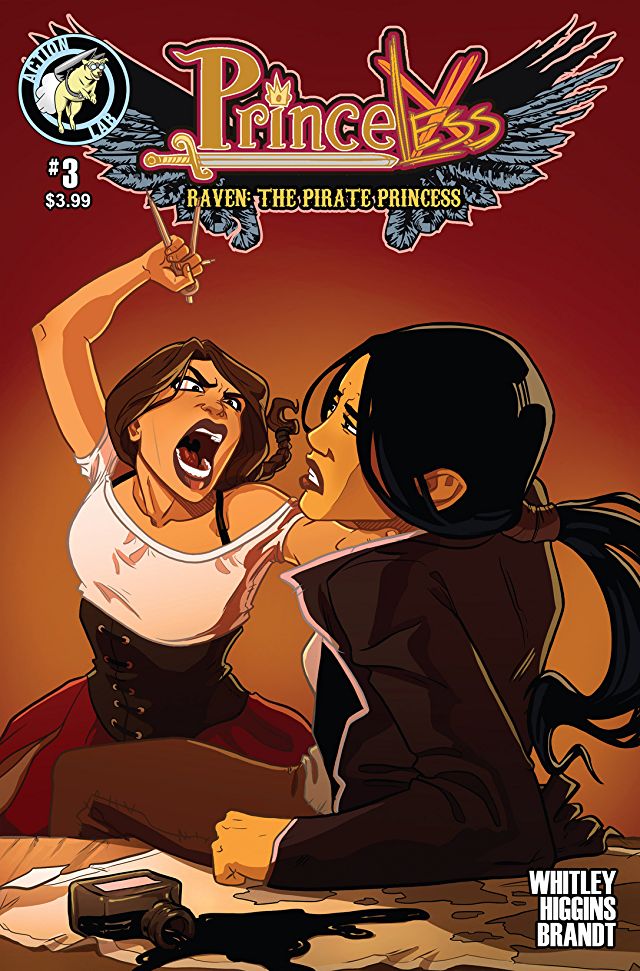 WOOOOOOOW. This cover tho. Never a dull moment with this series.

This issue begins with another awesome childhood flashback from the verily awesome Raven, who is pirating with her father and is sent on a very, very important part of the mission: to convince someone to come out of the cabin on the ship they’re pillaging. It’s only a job Raven can do and after it’s been done we see how: inside the cabin was a young girl around Raven’s age named Ximena, and through the power of young naivety and friendship they walk out together.

This gives us just the backstory we need on Ximena, who is not only a map maker and navigator, but also someone from Raven’s past that she’s meeting again, and a new character we personally get to meet later in the issue. (On  a side note: can I just say that this this scene wrapped up really nicely because as a woman I can’t imagine that this ended great for women throughout history on either sides of conflict in male-driven war and pillage.)

[divider type=”space_thin”]
So despite the sweet flashback, butt kicking, and all the fabulous joke territory that we keep cruising through, I keep having to remind myself that Raven is assembling her crew. No, really. She has a first mate. And a ship that she is on a mission to fill with crew mates. And the art stays up the par with the writing of course, from the brightly lit shop of Ximena to the dark and rainy streets that the girls walk through after leaving the bars, each page never looks too bright or washed out or too dreary. Each page is another added bonus to keep reading.

This issue is very important for a number of reasons, one being the emotional depth. Raven who was wronged by her brothers and ultimately the men in her family is confronted a person, a friend, whom she wronged by order of her father as a child. Raven is faced with a multitude of emotions, and most of them not in the positive direction because of her role in a scheme that ultimately ruined a family, and quite possibly a childhood. This was really neat to see in terms of character development and I hope to see Raven, who is now much older and more mature, do her best to keep her word and seek justice not only for herself but for those caught in the undertow.

They’re all there in the first four issues, but if you didn’t get a good look at all of Raven’s crew, here they are: pic.twitter.com/RyS3cdz3Az

As for the cameos/easter eggs dropped? Did you catch who the special panel of ladies were? Just some of your favorite female comic book writing badasses. I’m on my River Song grind: NO SPOILERS. Check Jeremy Whitley’s Twitter page for the answers.