After Seeing Black Panther for the First Time, When Can We Go Back?

As part of our ongoing coverage and commentary on Black Panther, the movie and the experience, here are two guest contributors providing their perspectives from across the country. They went to very different showings, but they both left feeling Wakandan in their hearts.

We were able to catch a 7:45 screening at the AMC in the Boston Common. This was a pretty low-key screening. As we were leaving after, people were lining up for the much anticipated midnight show. In our theater, one of at least eight showing Black Panther, we somehow ended up sandwiched between white people. That was fine though because as more white people showed up late they were unable to find seats together and no one moved for any of them. (Happy Black History Month!) We literally exercised our ability and right to take up space. All the energy among Black folks in the theater was amazing. Every time the clever dialogue dragged white people, there were snaps and cheering. I couldn’t have asked for more. – Rebecca

Habari Gani people! Black Panther is the title of this movie but in my heart of hearts I call it WAKANDA IS LIT AF (WILAF). The buildup for this movie was immense, my already high expectations were skyrocketing to ridiculous levels by the time premiere night hit. I was nervous that the movie could in no way live up to the expectations I had developed, I mean there was NO POSSIBLE WAY IT COULD. Never have I been so glad to be wrong about something in my entire life with the possible exception of the 2008 Iowa caucuses. (Make America Barack Again!)
But listen it wasn’t just the movie itself that was so breathtaking it was the entire experience. I know some of you don’t like crowds, and some of you don’t like to deal with the craziness of premieres and opening weekends, but just this once you’re gonna have to suck it up. Being in the theater in the midst of your people is an integral part of viewing WILAF. Waiting to see this in two weeks when the crowd dies down is like saying “I’m gonna slide through homecoming real late so I don’t have to see anyone” or saying “I’m gonna go to church on Tuesday to make sure I get a good seat”, you’re missing the purpose. This is a community event that is enhanced by the presence of the community. Will you enjoy the movie without the community yes, BUT WHY WOULD YOU? Being at the movie opening night was like the best part of your family reunion. Not the main reunion, you know the second reunion, when you and your favorite cousins go to your favorite uncle’s house and he breaks out the good liquor and expensive ribs, except it’s 400 of your favorite cousins and uncles and aunts. (Hey Auntie!) – Joseph 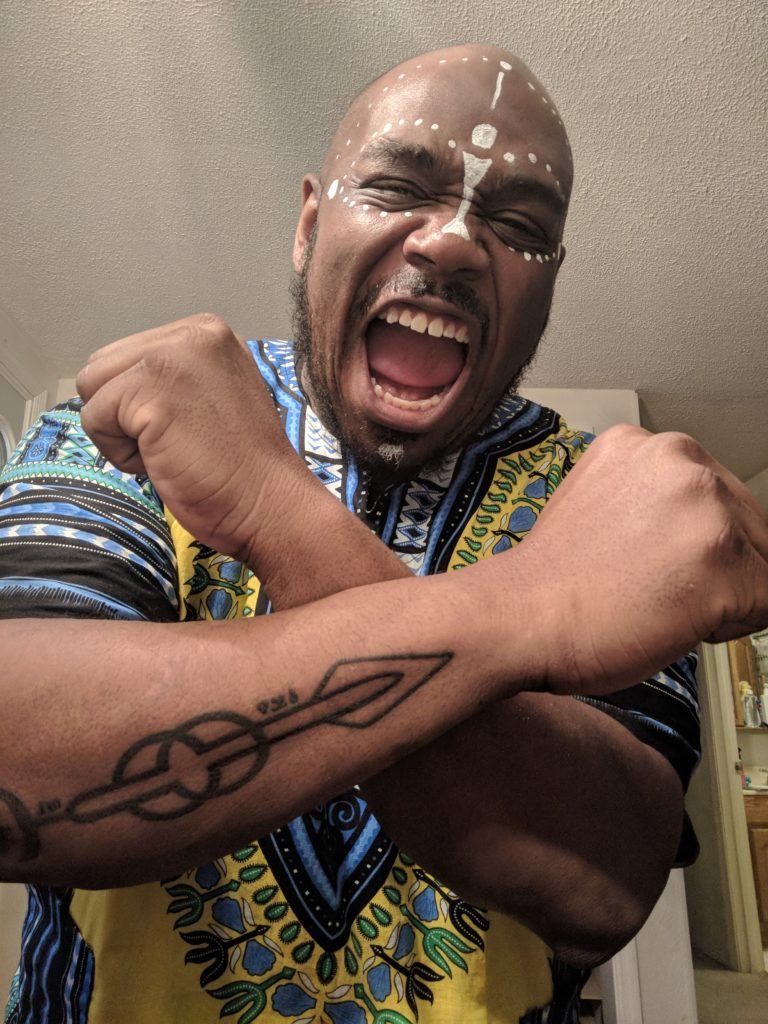 Natural hair and Black women with spears — that’s all I need to say. These characters were, unsurprisingly, stuntin’ everywhere. Throughout the film, we got to see multiple versions of the Black Panther suit, which was as detailed as it was useful. T’Challa rocked his casual wear as well, between battle and traditional Wakandan attire, the costumes were dope in every scene. Michael B. Jordan’s Killmonger was honestly a little hard to take seriously in his Travis Scott-esque “I Only Text You After Midnight” type get-up, but it was fresh regardless and felt true to his character. – Rebecca

As I walked in the theater the energy was palpable, there was an excited buzz, people were decked out in dashikis and Zulu hats, Wakanda T-shirts and face paint. There was a general sense of hopeful excitement. At the beginning of the movie someone yelled out “So we gonna sing Lift every voice and sing or nawww” and that set the tone for the entire evening. – Joseph

After hearing a few singles from Black Panther: The Album, I was curious to see how the music paired with the film. I was pleasantly surprised, as the combination of hip-hop in some scenes, instrumentals in others, and the additional chanting and singing from the characters on screen felt honest to the duality of Wakandan culture: contemporary, while simultaneously valuing tradition. – Rebecca

One thing I was nervous about before (as someone who distrusts Marvel), was how the film might do a disservice to the comics by pulling away from Blackness, or from just doing a poor job telling the story. Fortunately, my pre-Black Panther concerns were quickly diminished. One of the best things about the most recent Black Panther series is the perfectly paced storytelling. While going into the theater I didn’t feel like it was possible to do this particular series justice with just over two hours. How could 135 minutes even catch the essence and complexities of Afro-futurism and the perfectly paced storytelling that is Black Panther? – Rebecca

There is something beautiful about being surrounded by Black folks as T’Challa gets that faraway look in his eyes and says “This never gets old.” Then we get our first glimpse of Wakanda. We all collectively gasped together, we all sat slack jawed in awe together. Black folk are not a monolith but, in that moment we were one. There are times and things and events that bring the diaspora together and seeing the same reactions on the faces of my brothers and sisters around me was one of those moments I’ll never forget. Throughout the whole movie I was surrounded by US as WE saw the playfulness between T’Challa and Shuri, or listened to the sisters in the audience “Amen” at Michael B. Jordan and Winston Duke or the moment when the Jabari Tribe did something EVERY LAST ONE OF US HAS WANTED TO DO. This was a great movie made magical by being with other Black folks who got it, who knew when to laugh and cry, and cheer and “SAY WORD” at Shuri shutting down colonizers everywhere. – Joseph

Look it wasn’t just the movie, because after the show there was the afterparty. Once the movie was over about 200 folks just sat in the lobby talking excitedly about what we had just seen. We made new friends, we took pictures with each other, we excitedly pointed out each other’s face paint and outfits and got tips on where to find the best #WakandaWear. But the moment I’ll never forget was watching this little Black boy, looked to be about the same age as Tamir Rice, running around in full Black Panther get up, chest puffed out because EVERYONE wanted a picture with him. This brother next to me looked at him and said, “That’s what this is all about, I wish I would have had Wakanda growing up.” The two of us both unashamedly talked about the three times the movie had us tearing up. It was Blackness at its finest. It was brotherhood at its most beautiful, it was what Wakanda had done to us in that moment. The movie transported us back to a time when we were kids and didn’t have this type of representation, and it made us happy and hopeful that our sons and daughter get to grow up in a space where the idea of Wakanda is possible and celebrated and marketed and watched and consumed and loved. – Joseph

Somehow, Black Panther succeeded! The movie perfectly communicated the traditions of Wakanda, which allowed them to tell T’Challa’s origin story, while simultaneously introducing the audience to Wakandan culture, and providing strong introductions to other vital characters. Overall, my trust in Marvel is not fully restored, but maybe with a Black Panther trilogy, it could be on its way. – Rebecca

The movie was so good, the next day me and my fiancé went to go see it again, and this upcoming Friday we will once more go get our passports stamped to Wakanda and the only thing different will be the color of the dashiki and the style of our face paint. Because I mean… come on, can’t wear the same thing to Wakanda twice. Hopefully I’ll see you there. Don’t be afraid to hit me with some dap and a cross armed salute, I’ll be sitting in the mountains hanging with my tribe, grunting at colonizers. – Joseph 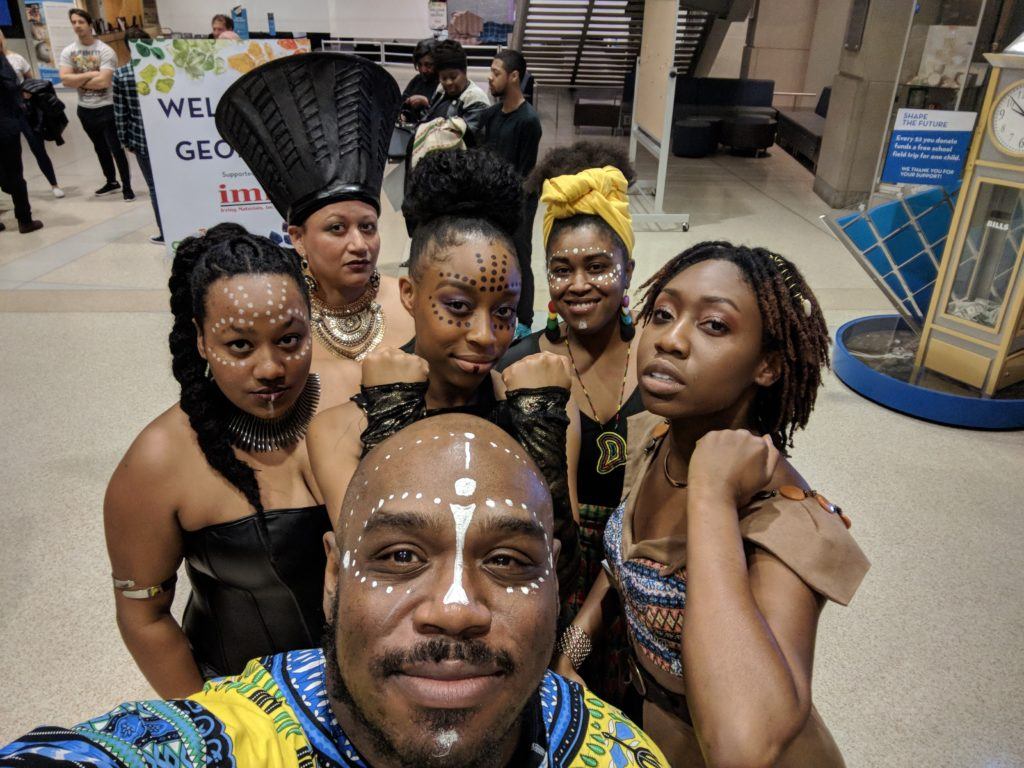